The batteries of phones and tablets keep getting bigger these days, although I’m sometimes asking myself who’s actually still using tablets? They need to stay charged, and as we usually don’t have a wall outlet near us, power banks are the way to go. Is the Xtorm power bank worth grabbing up? Or should you keep it where it is, at the store? Read on to find it out.

Before I start of with this review I would like to thank Xtorm for providing the review unit. And as usual they have no input on the outcome of this review.

Yeah, where should I start with this one. When I received the power bank, my hope was up for a great power bank with maybe even an aluminum shell. But it couldn’t have been more different from my expectations; it’s totally made out of plastic.

The top and bottom of the power bank are made out of a soft-touch rubbery material, something that’s pretty hard to describe. But it feels good, the next thing are the sides though. They are made out of that slippery plastic you would expect to see on $10 power banks.

On the front of the device you’ll be able to find all the charging ports, as pointed out in the specs there are 3 USB-out ports, and 1 USB-in port to find there.

There isn’t much to say here, it feels like a solid-build power bank. The power button gives a nice and solid click while pushing on it. Some may like this, but I wouldn’t mind it if it’s less clicky and instead a bit easier to press. And while this isn’t really an issue, the MRSP of this Xtorm power bank is nearly $/€80. Making me less forgivable about the “smaller” mistakes. Then you’ve also got the LEDs for the amount of juice left inside the 15.000mAh power bank. While they’re on you can clearly see the light coming out of a circle around the spot it should be coming from. Making it look pretty cheap. And again, I wouldn’t mind seeing this on a $10 power bank. But I’ve seen power banks costing ~$15 which would clearly come out as the winner if we would compare these power banks in terms of build quality.

The last thing I want to talk about is when you shake the power bank you actually hear the battery cells moving inside its housing. Which isn’t acceptable, not in terms of build quality, and neither for safety reasons. It may be my unit, but as this is just a normal retail unit it could potentially happen to everyone.

So now let’s talk about the actual performance of this 15.000mAh Xtorm power bank. And to be honest, it’s pretty damn boring. It charges my phones just as fast as my normal charging brick. There’s a big advantage though, and that is that I can charge two of my phones at the same time while not really slowing down the charging speed (Charges every device with around 1.7A if you connect 2 phones to it). If you start to connect three phones to it, you’ll need to wait a few hours before they’re charged as it max’ out at 1A for every port if you choose to charge three devices at the same time. Do note that it gets quite hot while charging 3 phones at the same time, and while this won’t be an issue for most, I didn’t expect this from a power bank in this price range.

Then there’s the point of quick charge capabilities, which is non-existent. As people buying power banks usually buy them for the more expensive phones which support some sort of quick charge technology, that’s a big letdown. And while I don’t own any devices supporting the more common quick charge technologies like Qualcomm QC 3.0 / 2.0, for those who do this may be the point where you want to stop reading this review. But, of course feel free to read on while I go through a few more points. Let’s talk about the amount of charges I could get out of this power bank. This power bank came fully charged out of the box (even checked it by plugging it in again and it was indeed fully charged-up.) So from that moment on I started charging my OnePlus One every single evening, mostly from 10% up to 100%. (As the battery is 3100mah, you could say that it would fill up the phone with 3100 / 100 * 90 = approx. 2800mAh every single night). After doing about 4 charges the battery was emptied out. As always, testing things once isn’t enough, so I tried it a few more times to see if that would be the end result for this power bank, after testing it for about 3 times I came to the conclusion that was indeed the final result. Which basically means that the battery has got an efficiency rate of 4 * 2800 = 11.200mAh, 11.200 / 15.000 * 100 = 74.7%. Which isn’t up with the competition, mostly showing an efficiency rate of around 80% or higher. This may differ for you though, but you could roughly say that out of the 15.000mAh there’s about 11.500mAh there for you to use.

So let’s talk about charging up the power bank. Alright, I didn’t look at how long it actually took to charge this thing up. But again, there’s no quick charge input, so it charges at the “standard” 5V/2.1A rate. Expect it to take somewhere between 4-6 hrs.

This power bank comes with two additional accessories out of the box, a small micro-USB to charge up your phone and maybe even the power bank itself. And a little carrying pouch, which feels a bit cheap to say the least. I wouldn’t mind if they had also included a charger for the power bank and a longer cable, especially at this price point. So, let’s make up the final verdict about this Xtorm power bank, coming in at a hefty $/€80. And I really need to be honest, the power bank simply isn’t worth all that money. I’ve seen a lot of power banks in the past few years ranging from a few bucks to about $50. But I hadn’t seen one costing this much, and I do not hope I’ll see one again with a similar design.

While the 15.000mAh battery inside the Xtorm power bank is a blast. It works just fine, and doesn’t blow me away. Missing points like the missing quick charge support for both the in- and output of the battery… doesn’t give me the sense that I would ever recommend buying this power bank.

Instead, look at other power banks on the market like those made by Xiaomi. They’re selling their Xiaomi Mi 16.000mAh power bank at stores like Banggood for just $15-20. Offering a sleek metallic housing, and better efficiency rates. Making up for a power bank with which you really couldn’t go wrong.

That said, if you just want a power bank, you don’t mind the cheap housing + high price, and you don’t want to buy products from stores in China. You may want to take a look at this power bank. 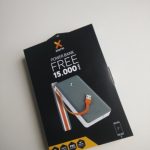