Xiaomi Mi Band 3: The Fitness Tracker For All?

Roll back a few years to the summer of 2014 and Xiaomi were just getting going with bringing devices to the market that the masses might actually get their hands on. The Xiaomi Mi Band was their first fitness tracker followed by the Mi Band 1S (or Pulse) which we reviewed and then the Mi Band 2. We reviewed the Mi Band 1S, very favourably, and it was very clear then that the small design, slightly more than the bare minimum in terms of feature set, as well as, and perhaps most importantly, the price being incredibly low, only served to get this into the hands of more and more people. It’s no surprise then that the Mi Band 3 follows the same design principles as its predecessors and performs rather closely also.

There are a number of the Mi Band 3 features that might tempt the average user to the device, and most of them appear in their previous fitness trackers too, however slightly upgraded here. The battery, for example, is now 110mAh which is up from 70mAh on the Mi Band 2, and is now offering up to 20 days of use on a charge. In real-world use though, with sensors like the pedometer and others working often, the display being toggled a fair amount, as well as smartphone notifications, pushed to the device, then we managed to get through 5-7 days on a charge which still isn’t bad. It’s a far cry from “smartwatches” available now, and rightly sits somewhere in between them and hybrid watches with a little less smart functionality.

Bluetooth 4.2 LE is on board now which helps with the energy efficiency.

There’s also a bigger 0.78″ OLED display for all of your performance metrics to be fed to you. It’s still not the most amazing display in terms of fidelity but it gets the job done and that extra real estate is put to good use with metrics often wrapping on the screen to deliver you more information.

Using the Mi Band 3 is as intuitive as you’d expect from a device suited to fitness. It has a main button, and the screen can be touch-controlled by gestures to cycle through category-specific options and information. Young and old, tech savvy or, well, not, the interface will be familiar with many.

New to the Mi Band 3 is the number of activities that can be tracked using it. It can now more accurately distinguish between walking, running and cycling for a start, but you also have the option of tagging recent activity as a number of presets so that interrogating your historical fitness sessions becomes a bit easier. Sadly once you have tagged an undetected activity to one of the presets, the Mi Band 3 won’t just pick that up next time it detects similar movement. Okay, I’d expect as much at this price point but it would have been a huge nice to have wouldn’t it?

Swimming is included in the comment above. Whilst the Xiaomi Mi Band 3 extends its water protection from the IP67 rating of the Mi Band 2 to 5ATM (essentially delivering 50 metre water resistance – don’t go scuba diving though), it will still fail to detect swimming as an activity. As this is rated for swimming, we’re sure that is to come in an update, but you can use the previously mentioned tagging method to tag your dips in the pool for now.

The Mi companion app offers a veritable feast of value-added extras here with the ability to track your sessions against your friends, share on social media, find your device if it goes missing, view historical dashboards of your tracked sessions, as well as engage Do Not Disturb, set goals and track your sleep cycle. The number of features here, for the price on offer, is astonishing. Add to this the fact that smartphone notifications are included as standard (something many hybrid watch manufacturers are still to cotton on to) and it becomes more difficult to think of reasons not to recommend this product to friends. 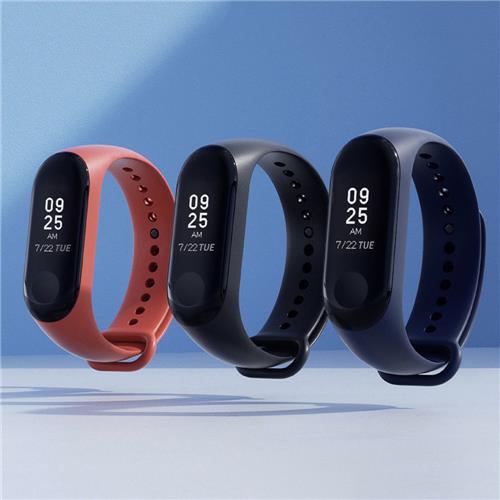 A few words of caution however. Whilst the battery is long lasting, its juice is cut by 75% when engaging in all of the above activities. The silicone band you get with the device is abrasive and not entirely comfortable to wear, and whilst there are many alternatives available for a few pounds via Amazon, it would be nice to get something comfortable, as well as free with the device. There are also concerns over just how snugly the Mi Band 3 pill unit will fit into the band after a few dunks in the swimming pool and a bit of expansion and contraction due to the heat. As in its predecessors case, I believe that you’ll be reaching for your smart device to order a new band before the first year is out.

The pill as I call it is also a lot bigger, and deeper than the previous device and this not just adds to the weight, but makes it a little more uncomfortable to wear whilst getting some shut-eye. It takes a bit of getting use to if you really want to track your sleep cycles.

That aside, you can’t compare this to anything that Garmin or FitBit can put out. No, it’s not in their league and based on the price, it’s not trying to be. What it is aiming for and what it does really well is fit into that cosy little niche in between smartwatches and premium fitness trackers, and hybrid watches, and provides enough brains and brawn to appeal to those straddling the fence, or standing quite close to it.

It’s not going to be for everyone, but anybody looking for a fitness tracker on a budget would be absolutely mad not to at least consider this, if they can get their hands on it. The Mi Band 3 is currently only available through importers to these here UK shores, but even adding the Customs Duty of around £15 onto the price, you’re still getting something cheaper than most other manufacturers deliver at their low end.