Here we go with Vivo again. They certainly took no half measures when it came to their debut UK launch. The Vivo Y20s is a more wallet-friendly device, aimed at the budget end of the market. It presents a more premium feel due to its design, but can performance live up to its looks?

Vivo PR provided the Y20s in return for a full and fair review. No money has changed hands and Vivo has not requested, or been granted, pre-approval or visibility of the copy prior to publishing. The Vivo Y20s was carried and tested for just under 2-weeks.

The Vivo Y20s is a device that shows just how far we’ve come in delivering quality budget-focused smartphones. It doesn’t feel too long ago that a plastic shell and a smaller, poor display highlighted just what part of the smartphone market you were shopping in. The Motorola E line of devices, for example, plays in exactly the same space. Back in 2014 the original Motorola E, then retailing for around £90, delivered a dual-core CPU, 4.3-inch IPS display with a 5-megapixel camera capable of 480p video recording. Granted, technology has improved vastly in the intervening years, but the ability to manufacture that technology as well as consumers expected much more now has led to devices such as this. 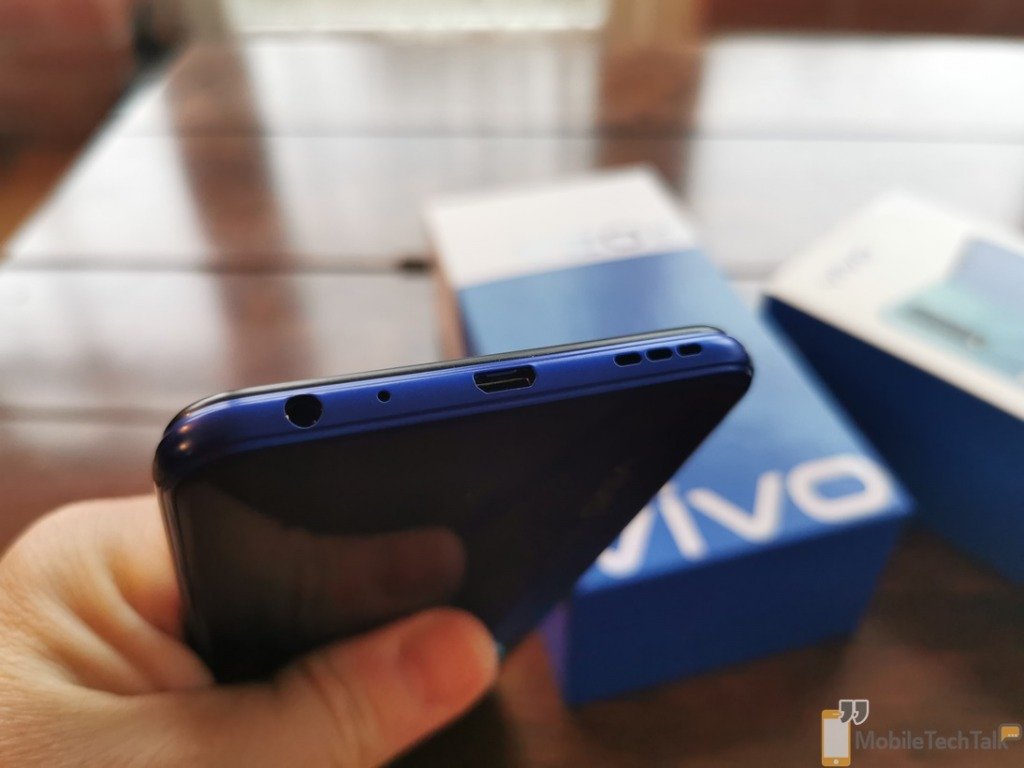 The Vivo Y20s sits alongside the likes of the recently released OnePlus Nord N100 in terms of price and specifications. The design too is similar, with a glass front and a plastic frame favoured by both devices. Vivo opts for a 6.51-inch IPS LCD display to sit front and centre, and power that 720 x 1600 pixel resolution by Snapdragon’s 460 CPU. The 460 is an entry-level chip but is also newly released. Being fabricated on Samsung’s 11nm process should give the Vivo Y20s some durability and efficiency.

On the right edge are a power button and volume rocker, with the former doubling as a fingerprint scanner. On the left edge sits the dual SIM card slot with the rest of the notable assets along the bottom edge. A 3.5mm audio jack kicks off the collection alongside a pinhole microphone, micro USB charging port and speaker grille.

The plastic casing fades away from the screen making the most of the 2.5D design. The device is rather angular too which, far from being uncomfortable, allows a more tactile in-hand feel. The rear of the device holds the stunning purple/blue gradient, along with the triple-camera array.

Finally, up front is the 6.51-inch IPS LCD display with a teardrop cutout for the front-facing camera.

Spoiler alert, I preferred running this device as my main smartphone more than I did the Vivo Y70. I just think the design is more striking off the bat, and the price-to-performance is simply more noteworthy. That design is as good a place as any to start. Available in Obisidian Black and Nebula Blue, you’d be forgiven for thinking that this is the first area of cost-cutting. The Nebula Blue version I have in for review is reminiscent of the Honor 20 line of devices. The design follows some family traits in subtle branding, offset camera humps and containing dual-SIM capabilities. It’s nice to see some through lines from flagship to entry-level. 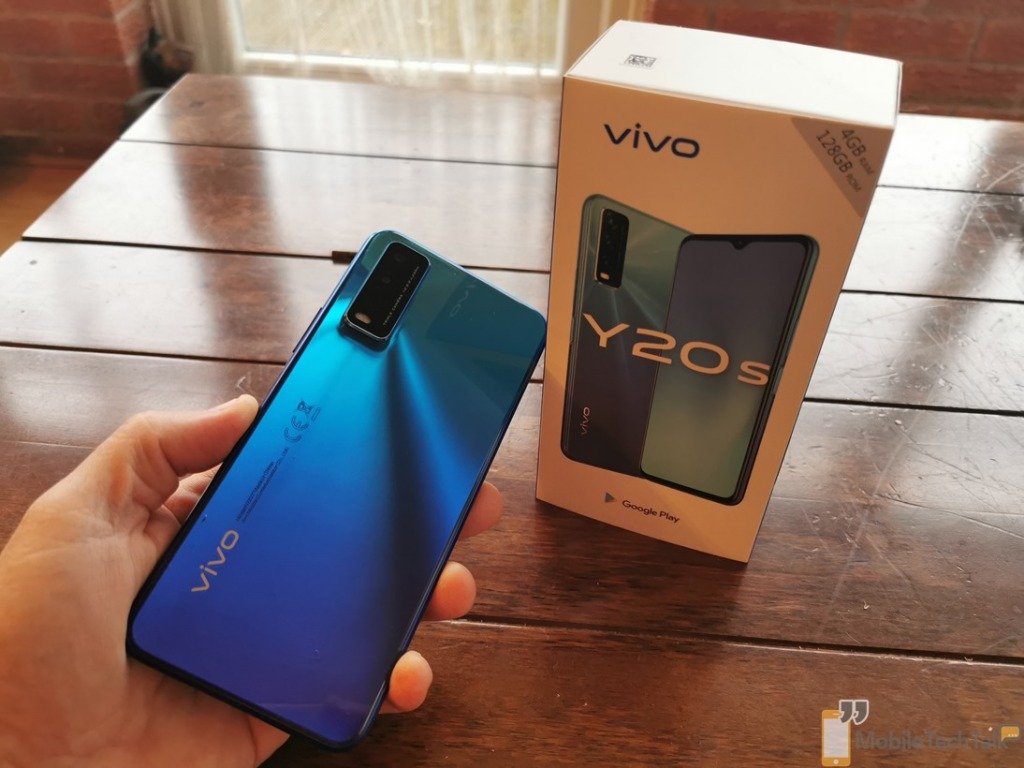 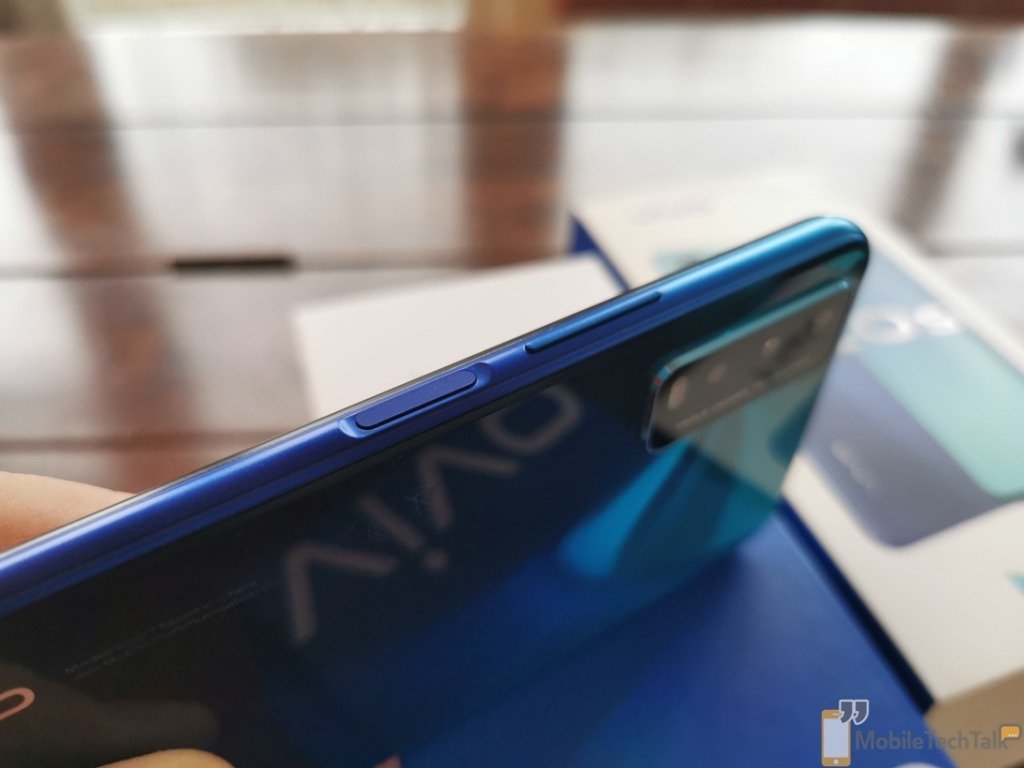 The buttons are tactile and easily distinguishable from one another and will feel intuitive as long as you’re using your right hand to hold the phone. Holding in the left, I found my fingers were drawn away from the button placement. Your mileage may vary. Further down the device, it was a bit of a kick in the teeth to find that there’s only a micro USB charging port in tow here. Its direct competitor, the OnePlus Nord N100, sports a Type-C port. The only redeeming feature is the inclusion of the same 18W fast-charging technology as in the Y70, delivering a 70% charge of the included 5,000 mAh battery, in a humorous 69-minutes.

That battery is of sufficient size that you’ll get through some significant usage. The larger the size of the battery on entry-level devices is usually a sign of the enormous inefficiency of the included chip. Not here. The Snapdragon 460 is more efficient than most entry-level chips, and the 5,000 mAh powers the device for longer than I anticipated, fairing well in our torture test. In fact, it managed to deliver over 10-hours of screen time in my synthetic testing, which equated to real-world testing reasonably well. Standby time is where the battery usually gets sucked but the Y20s performs well.

Can The entry-level Snapdragon Perform?

The Snapdragon 460 onboard the Vivo Y20s is not class-leading and it’s certainly not hugely performant. It manages daily tasks such as browsing websites, email composing and social media perusal, well. You can playback video smoothly, whilst taking video (more on that later) can make the device chug a little as it attempts to render the live recording on screen. I wasn’t unimpressed with this chip; you know what you’re getting with a lower-numbered Snapdragon SKU, animations can sometimes be choppy, and opening applications is far from the fastest. This might be down more to the storage implementation which I would guess is far from the latest UFS deployment available.

I did find that the biggest drawback was the bundled RAM. Due to the amount of RAM Android devices usually ship with, I think it’s safe to say some developers just get lazy; they don’t need their apps to be tight anymore. Those devices with less RAM do struggle when it comes to memory consumption, and this ultimately manifests in application reloads or poorer app switching times.

Watching movies and/or listening to music on the Vivo Y20s is a mixed bag. The included 720 x 1600 resolution IPS LCD is not a poor display, it just isn’t class-leading in any area. The colours are muted (something you can tweak with temperature settings), and of course you’re limited to 720p playback. When you are playing back a movie, whilst smooth, the resolution just isn’t there. It’s a good 720p display, but it’s still just a 720p display. The included speaker is surprisingly decent. Not only does it get very loud if required, but it doesn’t distort and there is enough clarity here to make it good for conference calls too.

As per the Vivo Y70, we’re not going to spend a lot of time on the software experience here. It is identical to that as found on the Vivo Y70, save it’s a little slower due to the decrease in hardware specifications. Funtouch OS is equally simplistic and stock-like here as it was on the other Vivo devices, and there are only a few Vivo-added apps on board from the get-go.

I did notice some delay in switching between apps, and the gesture animations were slower as was the time to launch applications in general. This is especially noticeable when Google Play is updating applications in the background. I’d put my money on the 128GB of internal storage being the cause of that bottleneck, with no marketing call out as to the UFS version in place.

There are a few nice little additions here, just like on the other Vivo devices. Three-finger swipes for screenshots, screen-off gestures to trigger an application or action, and split-screen are all nice to have functions at this price and add value and utility. Whilst I didn’t make too much use of them myself, I am aware that having the option is key.

Funtouch OS didn’t receive an update during my review period, whilst the X51 5G and Y70 both did. The September security patch is still in place on the Y20s and this is the only concern I have; will Vivo keep delivering updates to its budget device for a sustained period of time?

The camera is where this starts to go a little awry. Up until now, performance has been acceptable, hardware specifications have performed as well as can be expected, and the software is up to scratch. The triple camera setup is where the corners have been cut it seems.

In anything but perfect lighting conditions, users will see an abundance of noise and grain in their pictures. Outdoor shots are less prone to this due to the sensor getting more light to it, but in overcast days (we’re in the UK – there is nothing else) you, again, might struggle. Whilst the detail isn’t there as soon as you start to crop in, you might be able to get some relatively usable social media shots if you use some of the built-in filter effects. You’ll be using those filters or other editing software to add some dynamic range to your shots too as this aspect can be rather poor.

The 2-megapixel depth and macro cameras are, as I worried they might be during my video sample, pointless. Having a dedicated macro or depth sensor is all well and good, but using a 2-megapixel resolution camera to capture those images is less than ideal. You often end up with a muddy, unfocused mess.

The front-facing camera fairs a little better off in the low-light stakes due to a slightly wider aperture despite a lower megapixel count, but due to that lack of resolution detail will suffer.

Video on the flip can see some detail restored. There is no optical image stabilisation here so you must have a steady hand to get the best from the camera, something I failed at in my sample. Dynamic range again is an issue here with detail popping in at random times.

The Vivo Y20s is for those without a smartphone currently, or with a device that is more than a few years old.

The design will appeal to most looking for a more modern device, and the triple camera and 128GB of internal storage are specifications that, on paper, should draw some eyes considering the price.

At £129 unlocked (at the time of writing, from Box.co.uk) it’s a really good value and a great first stab at the UK-budget smartphone market. Unfortunately for Vivo there are competitors out there who have been delivering into the UK for some time, and companies such as OnePlus, with their Nord N100, are delivering more for the same money. If you see this in a sale, or you’ve taken with the design (and you probably will be), then give it a go. If you’re specifically after a speedy performer and a better-than-average camera from your smartphone, look elsewhere.