Venturer, the people behind the BravoWin 2-in-1 Windows machine, are back with an Android version. With a 10.1″ Android tablet, Quad Core CPU, 32GB storage and 1GB of RAM sitting atop a magnetised included keyboard, is 2017 really in need of another 2-in-1, and what do you get for not a lot of money? Let’s take a look in our Venturer Saturn 10 Pro Review. The Saturn 10 Pro is an interesting product. The now classic 2-in1 style sees a large 10.1 Android 6.0 tablet connected via a docking mechanism to a rigid keyboard to allow mobile productivity. That’s precisely what laptops are for right? Spot on, however laptops are often bigger, regardless of whether you look at a Macbook, Ultrabook, Chromebook or any other kind of book, and more expensive. Tablets, aside from Apple’s iPads are seldom seen in the wild, but the Asus Transformer, and the more recent Microsoft Surface range have brought 2-in1 detachables into the mainstream.

The Venturer Saturn 10 Pro isn’t playing in the same ball park as some of the names I’ve just mentioned, but it is looking to cash in on those wanting a similar Android-based experience, but without the level of investment required with some of the higher end offerings, retailing at just £130 from Asda Online currently.

The main tablet not only holds the 10.1 1280 x 800 IPS display, but also delivers all the controls and I/O. On the back face is a 2MP camera, with a large cut out for the speaker which is adequate at best, and a volume rocker than is easily accessible when reaching for the device, docked or otherwise. On the left edge sits a pinhole microphone, microSD card slot, mini-HDMI port, DC adapter jack, microUSB port, 3.5mm audio jack, and power button with a full size USB Type-A slot finishing off the inputs. Only the bottom of the device has any other connections of note, namely the keyboard dock. A four pin dock, with stabilising mounts allow easy connection with the included keyboard. There is some magnetism in use here but mainly we’re relying on gravity and tight fitting slots and grooves hold up the tablet when docked.

Powering the tablet is a MediaTek MT8127 CPU which is clocked at 1.3Ghz. MediaTek aren’t known for delivering top tier chips, and more often found in budget orientated devices, so that fits the bill here. Coupling the CPU is a disappointing 1GB of RAM, with a more respectable 32GB of flash storage built-in, of which around 26GB is available out of the box.

The storage isn’t speedy at all, which is one such component which can really effect the real world performance when opening applications. Compared to a flagship smartphone, the sequential and random read and write results are paltry.

Connectivity wise the Saturn 10 Pro has you covered with 802.11 b/g/n as well as Bluetooth 4.0. No AC connectivity here but in the use cases I can envisage for this device, N speeds should be enough. There’s also dual band support here too for your 5Ghz access points.

When you’re ready to get down to some productivity, the keyboard awaits. The hinge on the keyboard is bulky and solid, but doesn’t allow a huge range of movement, totalling around 100 degrees of pivot. You can of course detach the tablet and reattach to deliver a tent or yoga mode.

The keys on the keyboard are responsive, but quite small and a number of times touch typing has led to many more errors than I’d be used to on a chiclet style laptop keyboard. Across the top are a few Android specific hot keys with Home, Search, Brower and Email delivered alongside media function keys and dedicated volume and brightness keys too. All work as intended but feel wobbly and predictably cheap.

Venturer also commit a cardinal sin in my eyes, by changing the shape and the location of the right hand shift button, placing it to the far right of the keyboard in favour of arrow keys being closer. This is a huge issue for anybody who wishes to type at any particular speed and it took me a good 3-4 days before I could hit the shift button around 75% of the time without hitting the up arrow which also doubles as a page up button. You can imagine the fun I had there!

Overall the typing experience isn’t great, but it’s also not quite as bad as I’d expected at this price point. The trackpad is almost useless but as you have a touch sensitive screen just a few centimetres away, it negates the fury a little. With Bluetooth keyboards available out there for around the £25 mark, this sits alongside those in terms of functionality.

As far as other components of the Saturn 10 pro, such as the cameras, the best description for both the front and the rear 2MP cameras is passable. They offer an option for Video calling in a pinch but it’s not the most enjoyable experience. Equally, the single rear facing speaker, whilst getting quite loud is only passable also. Plug in some headphones to consume media on this device.

Battery life is an area that is of particular importance on a device like this, where productivity is going to take you longer than with a conventional laptop, and it actually delivers here. With a claimed 6 hours being backed up in our tests delivering an average of 5.5 hours, we’d give this aspect of the Saturn 10 Pro a thumbs up. The Saturn 10 Pro is the epitome of budget. It delivers on price and build quality isn’t too bad for that price point, however it doesn’t feel or look premium but it will hold up to a bit of abuse. It’s the performance here that’s going to have consumers frowning, particularly when there are other 2-in-1 options out there for similar pricing but better specifications. It’s a shame as we quite liked the BravoWin 2-in-1 Window device that we reviewed last year. Sadly Android 6 just isn’t compatible with a MediaTek CPU, 1GB RAM and sluggish storage. Perhaps an Intel chipset, 2GB RAM and some UFS 2.1 storage solution would put the ‘Pro’ back in the Saturn 10 PRO, but we’re also sure it would bump the price point. The old adage “You get what you pay for” couldn’t fit a product more perfectly than in this case. 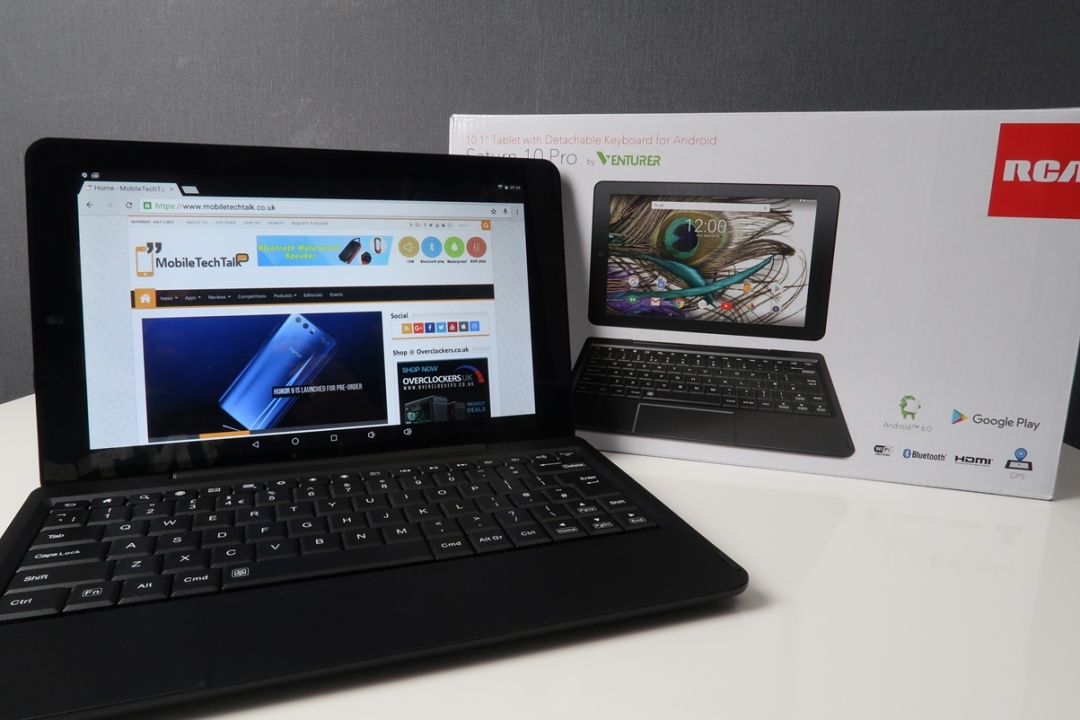