In a digital world where over half of the planet own a smart phone/device and become effectively engrossed in that side of technology, you sometimes forget about the things you take for granted and leave them, quite literally, in the background without noticing. It could be as simple as forgetting where you last left your keys, or where your wallet is when you’re in dire need of it. It’s a market that hasn’t been heavily tapped into since the dawn of smartphones, and the ones that have been tested aren’t too highly praised among technology circles in the first place. Let’s see if the Tile Mate changes this. Tile are a company wanting to change that negative approach to tracking things you most take for granted; integrating a small, coin-sized tracking device into your daily used items and taking advantage of existing technologies like Bluetooth/GPS to track them if you do end up losing them. It’s a simple concept, really – but one that hasn’t been executed at the best of times, mainly due to abysmal hardware setups that set up the product for failure before launch time hits. The US company took to Kickstarter like any startup would for their impressive idea, and the public spoke the volumes it needed for it to be a success, grossing over $2.8 Million in the 30-60 day expiry time Kickstarter has before funding, making it the most successful Kickstarter campaign next to the Pebble Smartwatch. The Tile company have been around for roughly a year now after their Kickstarter campaign, and they have been improving on their baseline product in that time also. Recently they released the TIle Mate, an even smaller, less prominent version of the original Tile a few months ago and the generous people over at Mobile Fun sent me one over for review.

Does the Tile meet up to its high expectations set from the initial Kickstarter campaign? Let’s take a look.

As far as packaging goes, the Tile Mate, or more accurately the Tile company did a pretty fantastic job at presenting the product without convoluting the boxing with unnecessary imaging. The box has a picture of the Tile Mate attached to a set of keys – and the thing I love most about this image is that it’s an accurate size representation of the product as stated on the box situated on the bottom right-hand side of the front. Along the sides of the packaging you will see the standard CE/FCC markings. The left-hand side of the box, however, shows a few things you can use the Tile product on. In this case a Bike, a Suitcase and a set of keys.

Moving along the back of the box now, it shows what the Tile itself is capable of; this isn’t your conventional means of tracking your keys, of course. This has added bonuses.

Removing the outer sleeving and you’re presented with a basic box with the Tile logo situated on the front. Removing the outer packaging for the box, you’re straight away presented with the Tile, with most likely an ensuing gasp for whoever has the pleasure of unboxing it. I myself was dumfounded by how small the product is. Other than that, you receive an instruction manual under the product presentation part of the box to finish it off. Overall, I was very impressed with how the product is represented on the packaging – it’s simple, minimal, but serves its purpose in the best way. The graphic designer in me also really likes the colour scheming used on the packaging – the green and whites compliment each other and isn’t too garish to take your eyes off of the main show, which is of course to show the product.

I’d like to start this section of the review off by mentioning the dimensions of this little companion: 34 x 34mm, weighing 6.1-grams.
For a comparison to the original Tile product, that came in at 37 x 37mm, weighing a slightly heftier 8-grams. The build of the Tile Mate, much like its older brother, is made, from what I can tell, of entirely plastic with a matte finish to add to the overall look. I’ve had no confirmation on this, but from my thorough testings of the device, it is some kind of plastic housing this device is encased in. Looking at the device, it hold its very unassuming appearance up immensely well and so it should. This device isn’t meant to be looked at, and more of a means to finding your lost keys without carrying around something that’s more than a third of the size of your actual keys. The Tile Mate has a handy little button residing on the front of the device, wherein the Tile logo also appears to be. It’s a lovely clicky button and hard to miss as it takes up a big chuck of the front, with a grey tone to it to differentiate which part you’re meant to press. You also have a tiny hole placed at the top left of the device to attach to your keyring or strap for your suitcase if need be. The device is built to last, and can easily take a few bumps and scratches throughout its lifetime without any serious degradation to its functionality. It’s not the prettiest looking thing in the world, but the whole point of an unassuming look is not to pose a distraction and for you to effectively forget about it while you go about your daily life. I have been using this device for close to 2 weeks and so far I have accumulated a sum of 0 scratches so far and it has been attached to my keys the whole time.

While the build quality may be unassuming and somewhat forgettable in its appearance, the functionality of the device is the exact opposite and has a lot of wonderful features to keep you using the device for those moments of uncertainty.

Not only can the Tile be used as a means of tracking…well, the Tile Mate itself, it also has a neat little feature on the Mate when you press the grey button on the front twice – it rings your phone when in range, making it a multi-functional tracking device, as it uses your phone as a Tile in on itself in case you managed to misplace your mobile device.

Setting up the app is the most painless experience I have had using products of this variety in the past. It’s a simple case of downloading it from the app from either the App Store, or the Google Play Store, opening it up, selecting the TIle product you have, pressing the Grey button on the device once and letting it sync up with your phone via Bluetooth. It’s as simple as that.

Now the app is setup, you can play around with the functions the Mate offers, which includes a ‘Find’ function for the Tile Mate or whichever product you decide to purchase. What this feature does is simple: Let’s say you misplace your keys which are attached to the Tile – you would simply press the ‘Find’ button within the app and when you’re in range of it, a little-yet-explosive ring comes from the Tile. As soon as you discover your Tile, in which your keys should follow, press the grey button on the Tile device and it switches off the ring it bursts out.

What happens if it goes out of range? The Tile uses geo-tracking via your phones GPS to pinpoint the last location the device was in range and triangulate where it should be to give you an idea.

On the app’s front screen it will show you the list of devices you have connected to the Tile (In my case the iPhone 7 Plus, Huawei P8 Lite 2017 and the Tile Mate).

Functionally, the Tile Mate is absolutely astounding, and I performed multiple tests of intentionally putting my keys out of range so it could attempt to pinpoint exactly where they were last seen and it found them with no issues. It helps that the sound it produces is deafeningly loud for such a small piece of equipment.

The phone finding function works fine, but you’re limited as to where your phone actually was if it becomes out of range, but as soon as it reaches a range within the Bluetooth limits, it’ll blare out a unique-sounding, distinctive tone to get you on track to finding the phone.

There’s no denying, at least from myself, that the Tile Mate is an extremely convenient device to have if you’re prone to losing things (which, coincidentally, I am). But there’s one quite large caveat to this: the price. The Tile Mate in the UK costs £25 for one, and £70 for a 4-pack. That doesn’t seem such a hefty price, but you end up clamouring for more of them to use on the more important things that you keep close which would end up being a costly experience in doing so. Functionally the Mate is fantastic, and I have had no struggles using it. From the app setup process, to tracking your lost keys, it was a pure joy to use and having that from such a tiny-looking product makes it a dream to work with.

Can you buy a better product for the price? Probably not, and this is why the price is slightly higher than usual, because the proof is in the pudding.

I would highly recommend buying the Tile Mate if you’re one of those people to lose things more than you do have them on you, because it would be worth the times you had to dish out sums of money 3x the price of the Mate for a replacement set of keys. 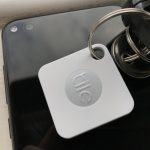