I have been using my last case on my iPhone 6S for about 9-10 months and I chose it mainly because it allowed me to show off the back of my phone whilst also providing great protection to my phone. Due to the type of material being used it did start to look a bit grungy after a couple weeks as light hit it. I hadn’t come across a case which looked as good whilst providing good protection but recently I reached out to Tactus to test out their Neoguard and they happily sent it to me. Let’s take a look. Thanks to our friends over at Tactus who sent this over to us.

The delivery was incredibly fast and I immediately got my old case off and put the Neoguard on it and the green colour I chose looked fantastic with the subtler gold colour of the iPhone 6 series compared to the 5S, which the first generation of phone Apple introduced the gold variant with.

The fit was fairly tight although I didn’t struggle when putting the case onto my phone and this is a good thing as if the case was loose, I would’ve got more dust stuck on the back of my phone which would look incredibly ugly. This is especially true as this is a clear case rather than one with a coloured back so the entire back of the phone is exposed. I do think that if the back of your phone is damaged then this may not be ideal as it will definitely expose the damage. I have been using the case for the last month and a half. The first thing that I like about this is that there is a lip on the case which is about 0.5mm over the top of my screen but due to my tempered glass screen protector it is probably only about 0.15mm over. This means that if you do drop the phone and even if you don’t have a tempered glass screen protector this should protect it really well.
Tactus have a unique dual injection technology which can be shown by the rubber-like looking pattern which is on the inside of the turquoise case. This looks really nice as it adds an extra dimension to the case and it looks really cool.

Something which is an issue with other cases is that the ports are incredibly small and therefore plugging simple things like your charger becomes an issue. I use a 2M Lightning cable on my desk and the actual connector of this is about twice the size of the Apple one which means some cases result in me not being able to charge my phone which is a huge inconvenience. But this easily allows me to plug my cable into my phone which is a huge tick for this case, in this case.

The back of the case is plastic rather than rubber which is something that slightly annoys me. This is because I have found that as it has been in my pockets of fairly tight jeans, the 3.5mm connector of my headphones has rubbed against the back and it has ended up in scratches all over the case which you can’t see from a far but from anything closer than 30cm away from your face, you are able to see it. This doesn’t impact me hugely as I always place my phone with the screen upwards so technically I never really see the back so it is really not an issue. Whereas if this was rubber or TPU then it wouldn’t have been an issue as the material would’ve not shown the damage as the impact of the contact wouldn’t have been as significant. The turquoise on the case does feel a little less vibrant than it did when it came out of its packaging I really put that down to the amount I use my phone and the amount of times it goes in and out of my pocket. But I have seen some similar cases from other brands whose cases look much more tarnished in a shorter period of time, so in terms of look, this is a much better deal. Overall, I feel like this is a great alternative to the similar Tech21 case although your able to spend only half of what the Tech21 case costs whilst getting identical, if not better performance from a great looking case.

You can buy this on Tactus.com for just over £8. 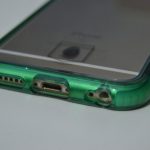