Stormtrooper Bluetooth Speaker: A Padawan Rather Than A Jedi

AC Worldwide have made a pretty big splash in the world of Bluetooth speakers with their licensed Disney property devices. They’re starting with Star Wars products but make no mistake there will be others. We take a look at the Stormtrooper Bluetooth Speaker here in our full review to find out if we want this particular unit to “move along”.

If you haven’t heard of AC Worldwide, not to worry; you will. They are a UK-based outfit full of Star Wars fans. This helps when you’re creating licensed Star Wars products of course. We first met these guys at the Gadget Show Live 2016 where they showcased their Stormtrooper and C3PO units with the sneak peek that there might just be more products both within and outside of the Star Wars universe coming soon.

The first thing to say is yes, this is a Stormtrooper unit, and yes it does talk. Rather disappointingly there seems to be only one phrase it utters upon pairing, however it is a rather cool “Move Along” accompanied with flashing green and blue LEDs in the eyes and the helmet and blaster noises. Rather authentic blaster noises too. If you’re any sort of nerd or Star Wars fan, you’ll instantly want to love this product. Looking at the unit, it’s a hefty little beast weighing in at 2.3 kg but feels very sturdy on the plastic base it’s positioned on. Size wise the Stormtrooper stands 28 cm tall with a base dimensions sitting at 20cm x 25cm. The base houses a number of capacitive buttons for bass up and down to control the subwoofer output, track forward and back buttons which double as volume control with a long press, a play/pause button which doubles as a call answer button, as well as pairing and Aux mode buttons.

The unit itself is a glossy plastic and certainly looks the part. We’re not sure we ever saw Stormtroopers show their Kryptonite-ised green eyes before, but aside from that it all looks pretty authentic. A smooth dome, relevant ventilation representations on both the front and the back all add to the aesthetic.

In terms of the built-in speaker we’re looking at a single 102mm 10W subwoofer to aid with the low-end and two 3W 32mm speakers to push the rest of the audio out of this helmet. That sound can come from an Aux connected device, or indeed a Bluetooth device and can be paired with via NFC too. There’s also a USB output for charging your paired device too. These capabilities are powered by an internal battery that runs to 2200 mAh and looks to deliver up to 5 hours of continuous playback and the included Bluetooth 4.0 connectivity should help reduce the speed at which that juice is sucked up.

In the box you get the awesome looking Stormtrooper, a cotton dust bag to carry (if you ever want to move it) your speaker, and a cleaning cloth to get rid of those pesky fingerprint marks. Cable wise a mains charger is included along with an Aux cable, and finally a user guide for quick reference.

Let’s start with getting the device setup shall we? Pairing is easy and rather than get you all to read exactly how this works (Spoiler alert – the same as any other Bluetooth speak with NFC), we’ll show you AC Worldwide’s own YouTube video on connectivity.

Once paired you will hear the relevant phrase (depending on the unit you have) and the blaster noises. These are VERY loud and can’t be turned down or muted. This can be a little annoying if you just want to put some subtle music on. Suddenly the crackle of an Empire trooper shouting at you can somewhat alter the mood. One could argue if you have a speaker that looks as this one does, you knew what you were getting into! The base, as previously mentioned houses a number of touch buttons that are easily tapped and the illumination of the blue LEDs denotes a positive press of the button. A little haptic feedback would have been nice here but as long as the device acknowledges the touch, we’re okay with that. The NFC logo is prominently displayed also and is something we’re seeing more with Bluetooth enabled peripherals. It works to good effect here too.

Moving on to the actual performance of the speaker, it’s a mixed bag to be truthful. Here’s what we found. Bass is prominent and clear thanks to that subwoofer inclusion, and seems to offer more than adequate sound. It’s difficult to compare this to similarly priced units as the main reason for the price of this unit is not the Speaker specifications as such, it’s the aesthetic and the Disney license. However, we can compare this to the Ruark R4 Mk3 we reviewed previously and the Stormtrooper compares favourably in the bass department; it’s 10cm subwoofer no doubt being the defining factor here. It gets plenty loud but that’s not the selling point. It’s actually a clear low-end for a change which is something we seldom see on Bluetooth Speakers outwith high-end units.

Mids are occasionally overshadowed by a booming low-end, but only occasionally which again is quite a feat considering the lethargy with which many speakers deliver their mid range. It’s not disappointing though. The High end however is. It can become too subtle in acoustic numbers and vocals are seemingly often muted. Equalisers within the myriad of applications users no doubt utilise will fix this, and have in our testing, but out of the box, it certainly resembles a “Stormtrooper Beats” speaker in the high-end.

Audio performance is slightly improved utilising the 3.5mm audio jack input, but not by much and given that the majority of consumers will most likely utilise the Bluetooth connectivity, that’s what we’ve focused on in this review.

Taking calls on this device (we wholeheartedly suggest dressing up as Han Solo prior to doing so in order to hurl insults at your “Imperial Scum” speaker – completely optional though) is also a little shaky. Callers sound a little ‘noisy’ and recipients suggested we sounded a little distant at anything other than 2 foot from the device. Not a deal breaker unless you’re specifically looking for a Stormtrooper conference phone; if you are then this device isn’t for you.

With all the flashing lights and the 10W sub to be driven, you’d be forgiven for thinking the battery life is going to be particularly poor. It’s not actually considering what’s baked into that helmet. The 2200 mAh battery manages it’s claimed 4-5 hours with it lasting around 4.5 hours in our testing. This consisted of continuous playback being interrupted twice with a phone call. Once the juice has depleted fully, the device took a clear 3.5 hours to charge which is a good 30 minutes above what the literature suggests. This might be our unit and your mileage may vary. This device looks awesome and anybody who is a fan of the genre, or a huge ‘Wars fan will jump at owning something like this. Not only is it a nod to something they love, but it’s a practical device too. It serves audio to an acceptable degree, and it’s licensed. Hell consumers can even opt for special numbered editions if they want to engaged their collector mode.

As aesthetically pleasing as it is, and it is, the audio is only slightly more accurate than an Imperial hunting party. Powerful and clear low-end can only just save this device from being consigned to garbage compactor 3263827. It gets plenty loud, and without distortion, but any nuance in the high-end is few and far between and saved for only specific music genres. EQ can fix this however if you’re willing top spend a little time tweaking the sound in order to get that Star Wars unit to sing like Figrin D’an and the Modal Nodes.

And therein lies the question that’ll decide whether consumers grab these devices. There are better options at this price point, but none deliver the nerdgasm-inducing aesthetic like the AC Worldwide Stormtrooper speaker does. If you’re somebody who wants that specific element, then look no further; in fact you’ve probably already purchased the device over at their store haven’t you?

If you’re after sound over style by an order of magnitude, then look around first before dropping the £149 on this device. We’re not saying don’t buy it, just do some due diligence before deciding whether of not this is the Droid you’re looking for (we know they aren’t Droids but this helps end the review nicely – let us have this one will you?) 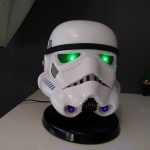