Motorola’s G line was one of the standout surprises of 2013, with it’s great price point, near stock look and feel and surprising performance. Fast forward 3 years and the Motorola G4 range are the great grandchildren of that original. Yes, plural, as there are now three in the G4 range. We’re checking out the Motorola G4 Play and we’re wondering how this mid-range device fairs in a world where mid-range is now the new norm?


I would like to thank Vodafone for sending me out the Motorola G4 Play out for review.

The G4 Play is in the lower end spectrum in the G4 line up coming at £120 from Vodafone on pay as you go. Whilst I’ve reviewed Vodafone’s effort on budget handsets it was a nice change to try someone else’s offerings.

So as usual let’s get the specs out-of-the-way.

I have the model with 2GB RAM and 16GB of storage.

As far as an unboxing goes it is a simple affair here. Cracking open the box you are greeted with the device itself with a screen protector calling out the basics specs. Under the phone you’ll find a little tray and removing that reveals the charger and paperwork. No earphones with this one. However, the G4 play has a headphone jack so you can use a set that you already have. The charger is interesting since the cord is permanently attached to the brick. Not a problem since it’s micro USB so you’ve probably got USB cables lying around anyway.

So as mentioned the Moto G4 Play features a 5-inch 720p IPS LCD display. A common choice here when it comes to the budget devices. Now like I’ve said in earlier reviews of the Vodafone devices that are around this price point, the 720p display isn’t fantastic but it gets the job done, and it does the job well. Viewing angles are great and the colours obtusely fine. To repeat something that we regally say on the podcast “720p on a 5-inch display is more than adequate”. Fine for social media and fine for videos. Sure, there is a noticeable difference between this and my Nexus 6P, but then again there are big price difference between the two. So, to say that I find it fine means it can’t be that bad.

A no thrills experience here. The G4 Play’s speaker is the same as the earpiece. It sounds pretty good damn well all things considering. How much it costs. Though I’d imagine if someone was hard hearing they could activate the speakerphone when making a call to get the volume to increase. Theatrically possible though I am unsure if it works. More than fine for watching videos but I wouldn’t want to use it for listening to music or podcasts unless it is close to you ear. Though there are plenty of affordable Bluetooth speakers and headphones on the market so that may be the solution for you.

Once again the camera performance is nearly the same as other phones in the price bracket. But it does it better. Compared to the Vodafone Smart Ultra 7 it does it better. Sure, whilst it still struggles with bright sunlight and reflections, if you take it somewhere a bit duller then it works fine. However, a landscape doesn’t turn out all that bad. Add it all up and the camera experience is pretty good. Especially at the price.

Moving around to the front camera. It doesn’t blow the socks of any other phone but it does perform slightly better compared to the Vodafone Smart Ultra 7. Now I’m not a selfie person but judging from the selfie I took of myself and the selfie of the dog does show that it is OK. 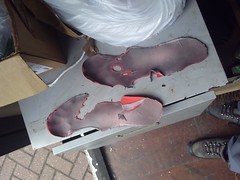 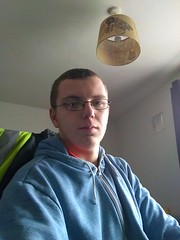 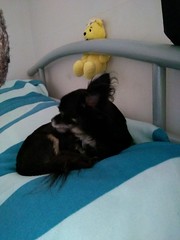 Moving over to video the rear camera it is very shaky. Whilst I try to keep myself steady whilst shooting these short clips, there is no denying that it is shaky, heck it would probably make someone motion sick. The colours are slightly washed but it isn’t ground breaking. It also tried very hard to show (clearly) the different colours of the leaves. But you can see the different colours. Once again the landscape shot does look slightly worse than the image counterpart.

The front camera makes the image very soft. As well as a slight colour wash. For Skype and Hangouts, it is fine. This is better than the most of the webcams I’ve seen built into laptops. So, for an on the go call it is fine. If you watched episode 48 of the podcast you can see my point clearly as demonstrated by the HP Dom has. In fact, I’d say that’s all I would use the camera for.

Battery once again is what many of us dream about. As you can see from the screenshots below. The battery life was amaze balls. Easily lasting me the day on heavier days and on lighter days it expects to make it virtually next day as well. Again, like I have said with other low-end phones this is due to the fact they are moderately spec’ed and by far the lower res panels.

Performance is not groundbreaking, nor do I expect to be groundbreaking . In Geekbench 4 it scored 494 on single core and 1254 on multi-core. If you don’t know these numbers mean very little to me. It is all about do I need to enable developer settings and turn the animations off. Well with this one I didn’t have too. It was very usable and for 99% of the time the developer settings were off. In the last few days I turned the animations off. But, like I said earlier it was perfectly usable without having the animations turned off.

At £99 on pay as you go the Moto G4 Play is by far my favourite phone in the sub £150 market. A simple no thrills device with a medium-sized battery and low powered components and 720p screen gives for a battery life that many of us crave. The buttons feel firm and not mushy. This is the phone I would recommend to people who are after an inexpensive device or someone who needs a cheap phone whilst their main one is out-of-order. You cannot go wrong with this one.

Have a G4 Play of your own? Let us know what you think. 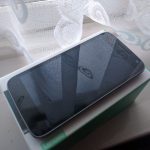