MobileTechTalk generally reviews new “tech” products but as we grow as a brand we will be testing out more and more products which will form part of your smart life. This bottle can probably be part of your new smart life. 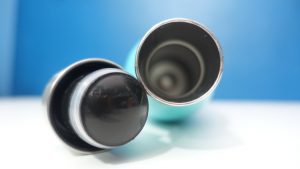 This bottle claims that the technology used inside this allows you to keep your water cold for 24 hours and will keep it heated for 12 hours. The packaging that this came in was fairly big but protected the Aqua coloured bottle. Something I found cool was that the company donates 10% of their profits to Mary’s Meals which is a charity which provides children that are chronically hungry at least a single meal every school day. This is a great movement and props to SHO for doing this.

Inside you have the bottle covered in a plastic wrapper which isn’t the best way of protecting the bottle but the outer cardboard should protect the bottle easily. The top does screw off fairly easily but if you lack strength in your hand then this may be a slight issue. Once you do this, you will be able to see the rubber seal that protects the bottle from leaking. The inside of the bottle is stainless steel and this is used due to the fact that stainless steel allows for the temperature levels to be retained over a long period of time. 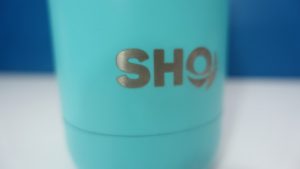 The outside has a SHO logo which feels laser etched onto the bottle and probably is the same material which coats the outside of the bottle and is the layer beneath the aqua colouring. This colour is indicated on the outside of the box although this doesn’t bring much benefit to the end customer, rather just to the warehouse staff that organise and ship out these orders. This SHO logo does get a bit annoying as it picks up a lot of micro abrasions which is a pain, this is because if you keep this in a bag then it will get fairly scratched up easily. 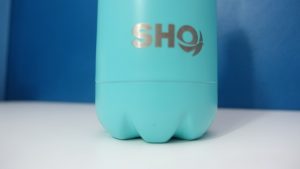 The bottom of the bottle is shaped like a conventional bottle which is good because it makes it look less like a travel flask and more like a convention drinks bottle. The blue coating seems incredibly durable and it’s been in my bag alongside folders and I can’t really see a mark from anything and the only real location where I would see this as an issue would be if you were keeping it with keys or other sharp objects.

I did feel the bottle was a bit strange smelling when I first got it, and I did give it a good washing out to get rid of the smell and it did take a couple washes to get rid of it completely which I would really recommend you doing. 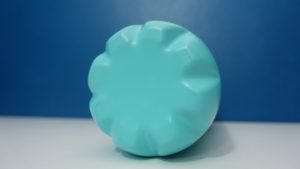 You are able to see the remnants of water droplets on the outside of the bottle as they have left an imprint on the bottle which although can be sorted by simply wiping the bottle but this is annoying for me personally especially as I am cleanliness fanatic but most people won’t be affected by this as these can only be seen from extremely close up. 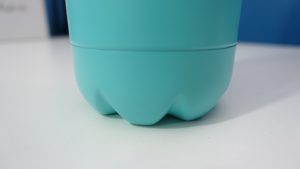 The first test I did was to check how warm the bottle would keep boiling water directly from the kettle and I poured about 800ml of boiling water into it at about 11AM in the morning and then I did a quick check on the bottle at about 4PM and it was still boiling as claimed. Then I checked again at about midnight and the water was still incredibly hot and was releasing steam from it. The next morning, I did a check at about 8AM and the water was still really warm and still too hot for washing dishes so this product goes above and beyond its stated hours which is great. This was a great thing to be able to know that this keeps drinks warm to higher than drinkable levels for nearly 24 hours. 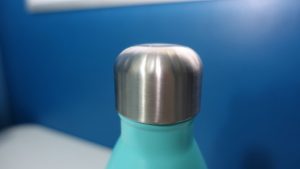 The next test was the cooling test. I put cold water from the tap in at about 9AM and then left the bottle for 24 hours and checked at 9AM the next day, and to little surprise the water was just as cold. I left this water in for another 12 hours and the water had only just heated up the slightest amount and it was probably by 2/3 degrees Celsius. This is great to know when I want to use this for water in the hotter summer days when my plastic bottle usually steamed up within about 3 hours of me filling it up which was annoying.

The next test was to see how long it could keep my dad’s tea warm as he usually drinks 1/3 of it on his commute to work and then drinks it at intervals throughout the morning but by the time he has drunk about 1/2, it has usually gone cold. I told him to drink his tea in this and he poured it at about 8AM into this and he came back at 6PM and the tea was still really hot which is exactly how he likes the tea to be which is good as it means that even if he forgets to finish it in the early morning, he can drink it later on. He did this for a couple days and it meant that for once he actually finished it off because it was still warm.

The size is a bit unwieldy as this is about ½ bigger than my current 1L water bottle and I really put this down to the double walling inside and that the form factor has to accommodate for the size. You could get the smaller sizes and the 500ML or 750ML would be perfect for taking a hot or cold beverage with you when you travel.

You can buy the bottle over at SHO or Amazon. 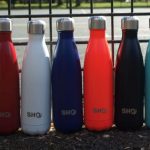