Another week, another monitor review! This time from a different category in the display ecosystem: thick, voluptuous, curves. Curved monitors are a somewhat new technology, with the first one being announced back in 2014 with primary efforts being presented by display powerhouses LG and Samsung, ensuring a little bit of competition right out of the gate.

It took a long time to perfect this technology, though – As with anything when it’s fresh and new, it requires a lot of tweaking to get it 100% perfect. When the first batch of Samsung and LG curved TVs came to fruition, the ‘panel bleed’ effect was a real problem that needed fixing as quickly as the Koreans could work their fingers.

For those unaware, panel bleed is basically light bleeding from the edge of the screen which is classed as a defect on most conventional displays — but for curved displays, it wasn’t as much a defect as it was part of the parcel. There was never any panel bleed, to begin with, it was just when you looked at the display head-on, you were looking at it at a different angle and it caused the infamous ‘panel bleed’ effect. Now that the technology and production have caught up with itself, this ‘panel bleed’ effect is finally in the overexposed shadows of the nether-realms.

I mentioned this in my previous monitor review from the lovely people over at AOC, but the monitor business is booming with competition – one company in particular in the firing line of said competition is Philips. You will probably know the name Philips as they spearheaded the TCT TV monitor movement way back in the day, but fell from grace not long after that after Samsung won the war for display dominance. Philips has been trying to gain back their momentum for a decade now, with no real accomplishment so far. Now that a new category of displays has come around, its Philips’ best opportunity to get the jump on the leading display maker on the market: Samsung. Thanks to Elena over at United Communications, I have the honor of reviewing Philips’ foray into the curved LCD display market, the 278E8QJAB. Let’s get curvy.

Saying this monitor is a beautiful piece of equipment is a complete understatement in my book. As soon as you take this piece of well-engineered equipment out of the box, you know for a definite fact that this monitor is going to make you weep with joy and ecstasy. The way the Philips logo hangs from the monitor is an ingenious way of being slightly different in a world where logos for companies are plainly embossed on the monitor edging itself. The logo dangles from the bottom of the display, on a see-through bit of a plastic with the bold ‘Philips’ text prominently in the middle of it. 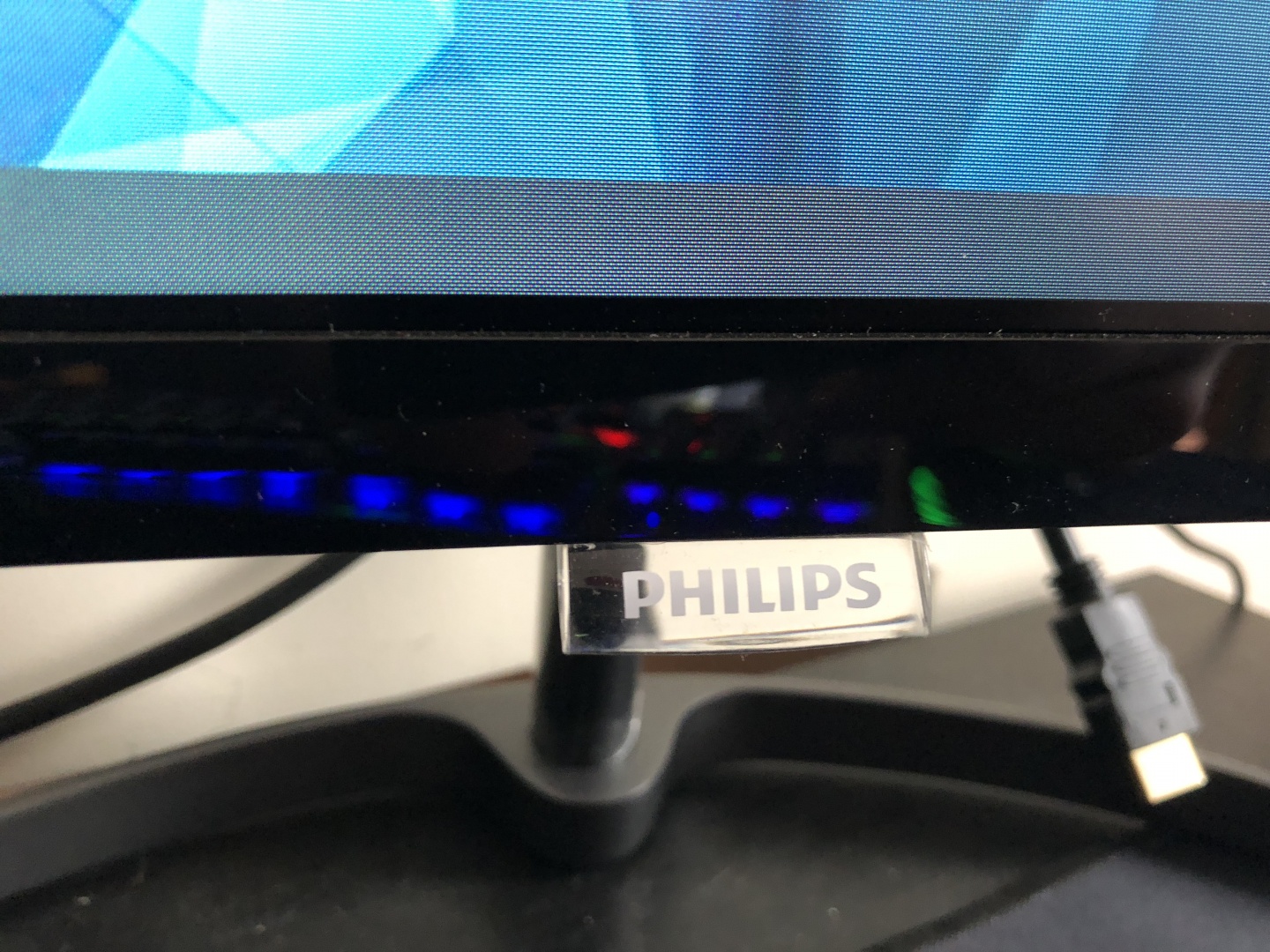 Just above the logo, the main attraction of the ride makes its appearance: the curvaceous display. Being a 27″ display, there would be no denying that this is a display not to be messed with, but it’s not the size of the display that you need to be taken aback by, it’s how consistent and well-designed the curvature of the display is. Before this review, I had never seen a curved LCD display in the flesh before, but it blew my mind as soon as I laid eyes on it. The way the curve blends into the bezels of the display makes for a cinematic and enjoyable experience, and the thinness of the equipment itself makes you wonder how Philips managed to pull this off without having a massive power brick getting in the way. Don’t get me wrong, the display comes with its own dedicated power brick, but it’s as small as this display is thin. 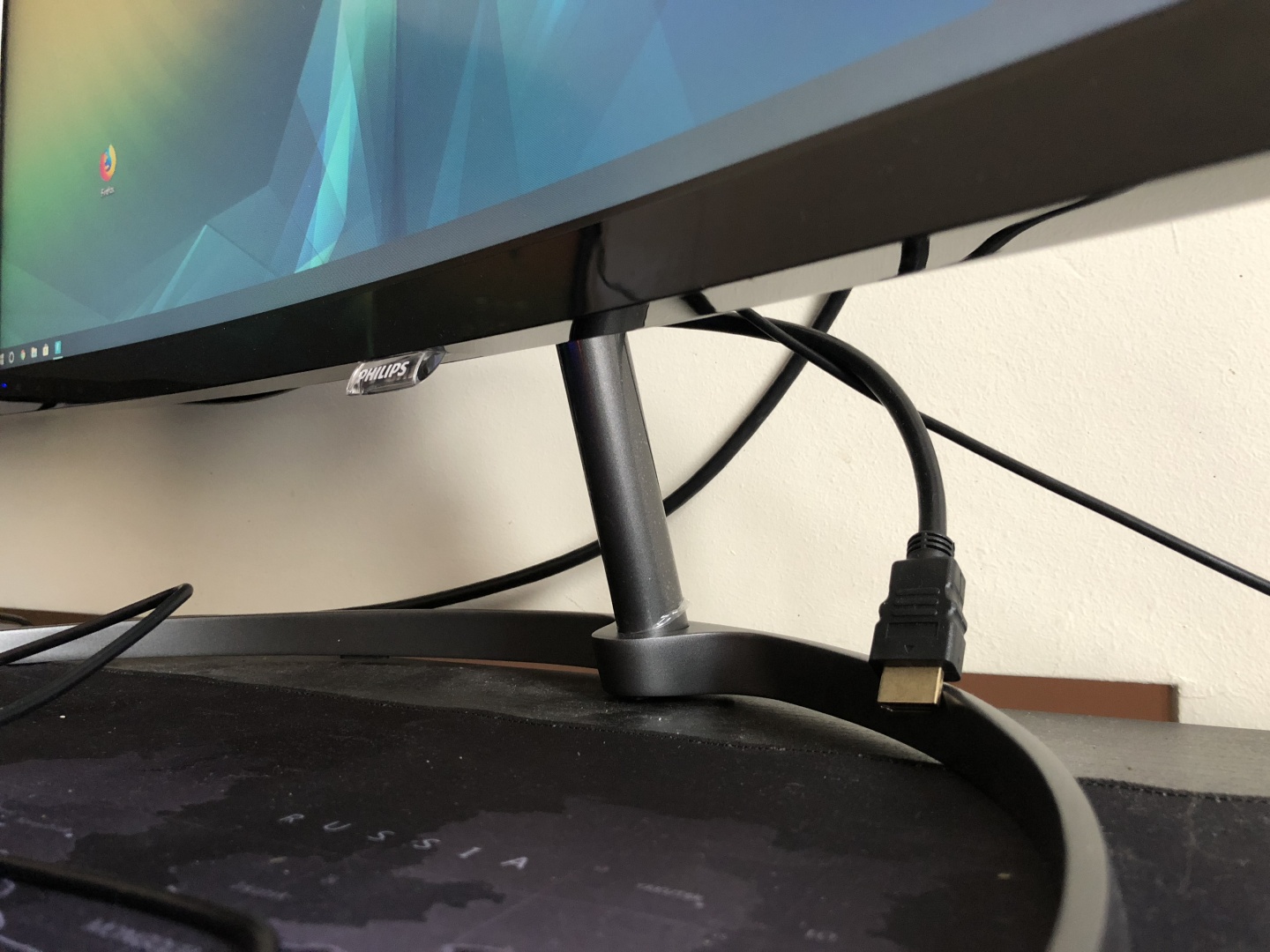 It’s not just the display that needs to capture one’s attention, as much as that sounds silly to say; the monitor also needs something to stand on in order to have a full experience. Unlike the AOC monitor, I reviewed a couple of weeks ago, the halo-like stand the Philips display sits on is relatively small in comparison and could easily fit on any conventional computer desk. Of course, as the display itself is curved, this also condenses the fit down by a couple of inches to have the most compact of experiences while still maintaining the full-headed 27″ experience. 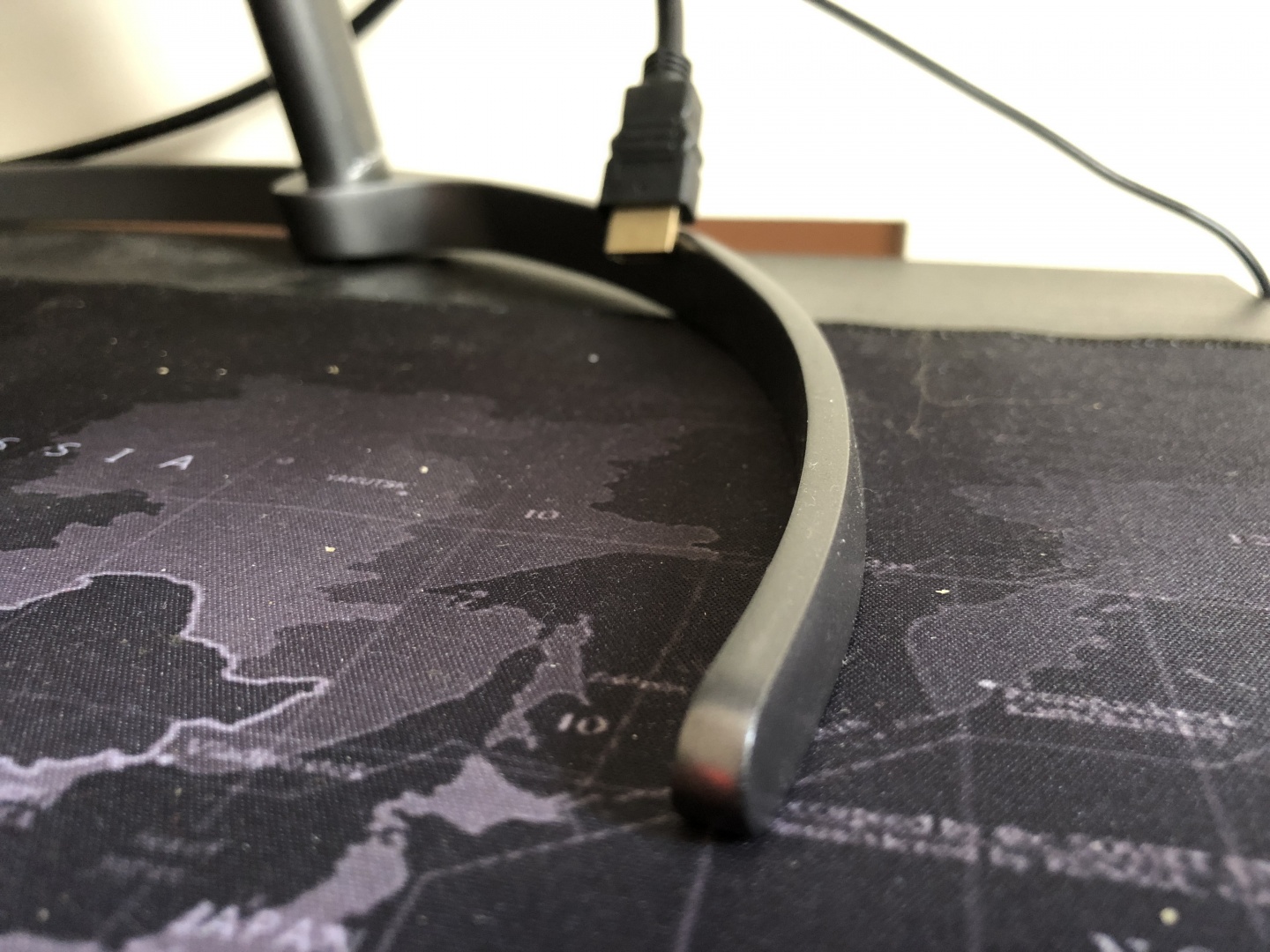 Overall, this monitor is possibly the best-engineered piece of equipment I’ve ever had the fortune to test before. From the ingenious logo placement to the consistent curves, you can tell Philips had their best men on the job for this one.

As much as this monitor deserves all the praise it can get, for the most part, there’s a massive detriment that is also needed to be said in the same breath that made life with this monitor during testing a major farce to get my head around. When you take the display out of the box, you’ll be surprised to know that there are no actual buttons to configure it like many, if not all other monitors have. In an effort to be ‘different’, Philips decided to have one single toggle to configure the display and change the sources as you need to. This, by far, is the worst implementation of a settings configuration in a monitor I have seen. I’m not one to read manuals to gain an idea of how to use something of this calibre, as you’d expect it to explain itself as it goes along, but with the Philips 27″ monitor, you’ll need to do your research before configuring it. 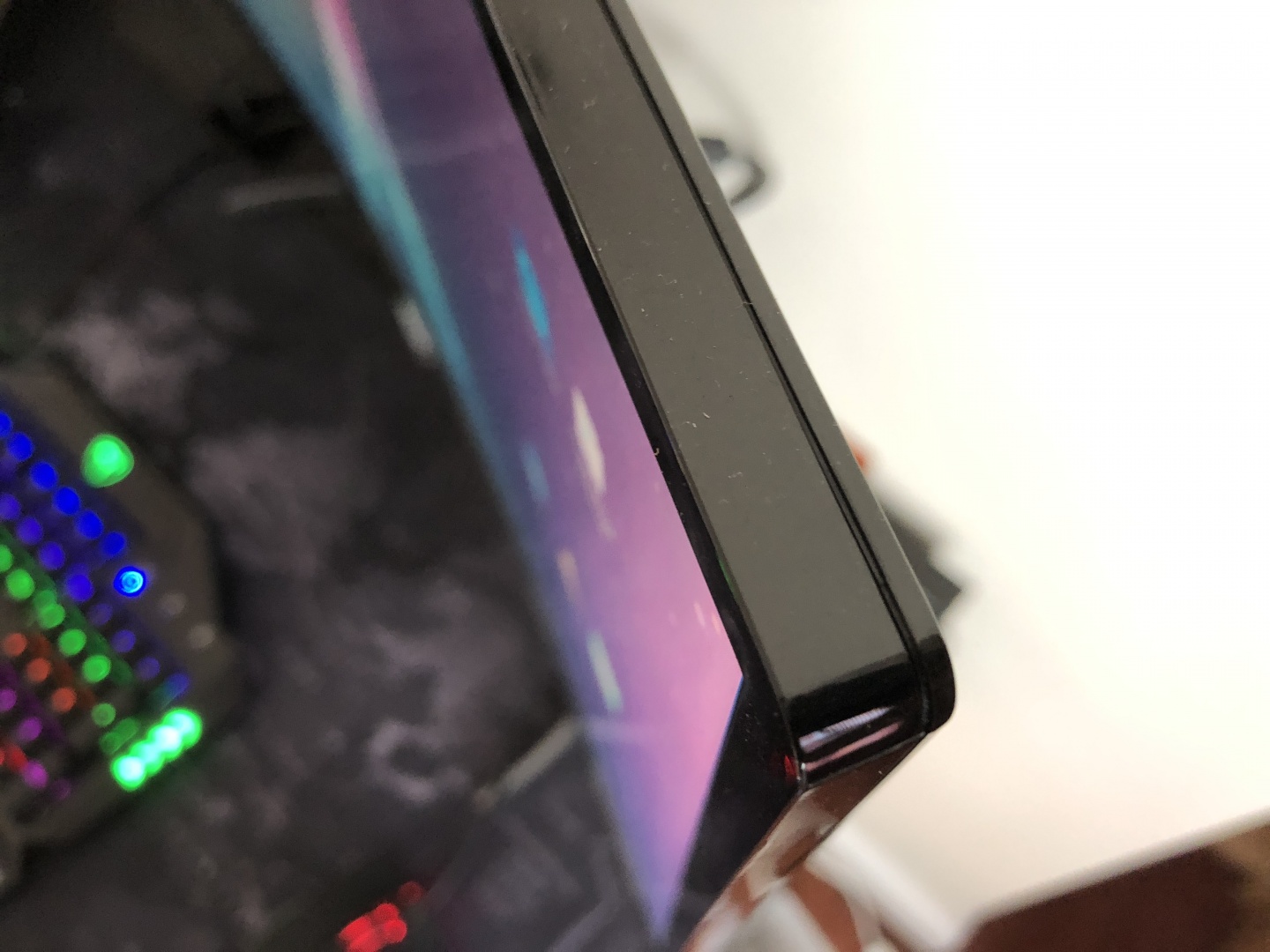 The toggle goes in 4 directions: left, right, up, and down. If you’re like me and don’t like to read instructions, finding the toggle is the first hurdle you need to get past as it’s not exactly the easiest thing in the world to find (Spoiler: it’s just behind the Philips logo). Once you find it, you kind of have to guess what works until one of the settings finally sticks. After almost 3 hours of finally perfecting what is a very cumbersome experience, I still feel like it wouldn’t have been much of an effort on Philips’ part to just put separate buttons underneath the display itself, instead of a toggle on the back. 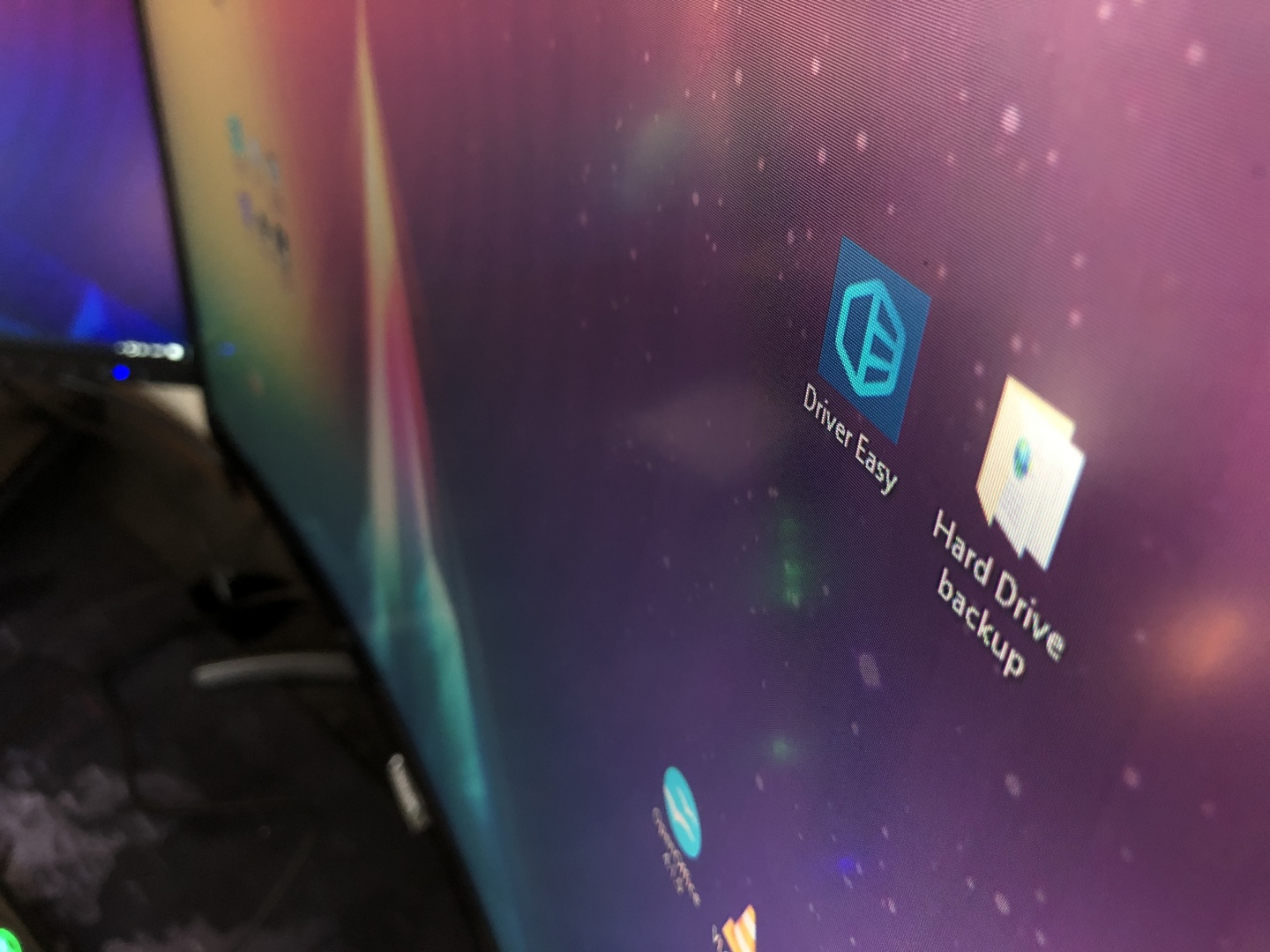 Moving the toggle to the left will show the sources you need to change to either VGA or HDMI. Once you have selected the source you want, to apply it and switch over, you have to turn the toggle to the right. You have no idea how long it took to figure this out. To change the volume on the display, move the toggle over to the right and move it up and down as you so, please. Move the toggle up to change the calibration of the display, and down does nothing. Holding the toggle down puts it in sleep mode. On the topic of sleep mode, this was the biggest pain point in all of this implementation: it just doesn’t turn off no matter which direction I appear to put the toggle in.
To put this in a TL;DR: If you like reading manuals, get this monitor. 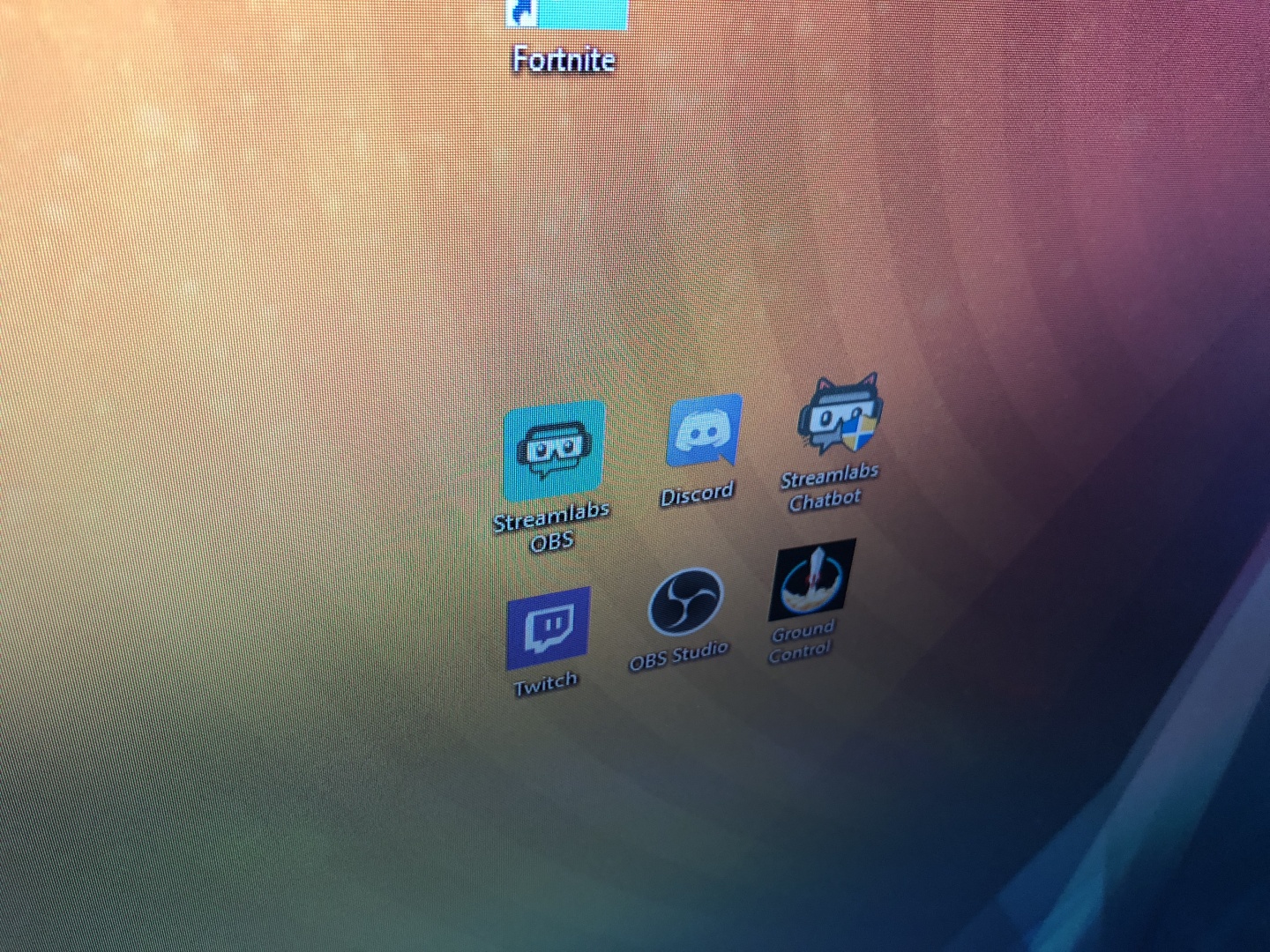 On the note of connections, this monitor doesn’t have nearly enough. Most conventional displays have the standard of 1x HDMI and 1x DVI connection, whereas the Philips monitor has replaced the DVI with the severely outdated VGA technology. 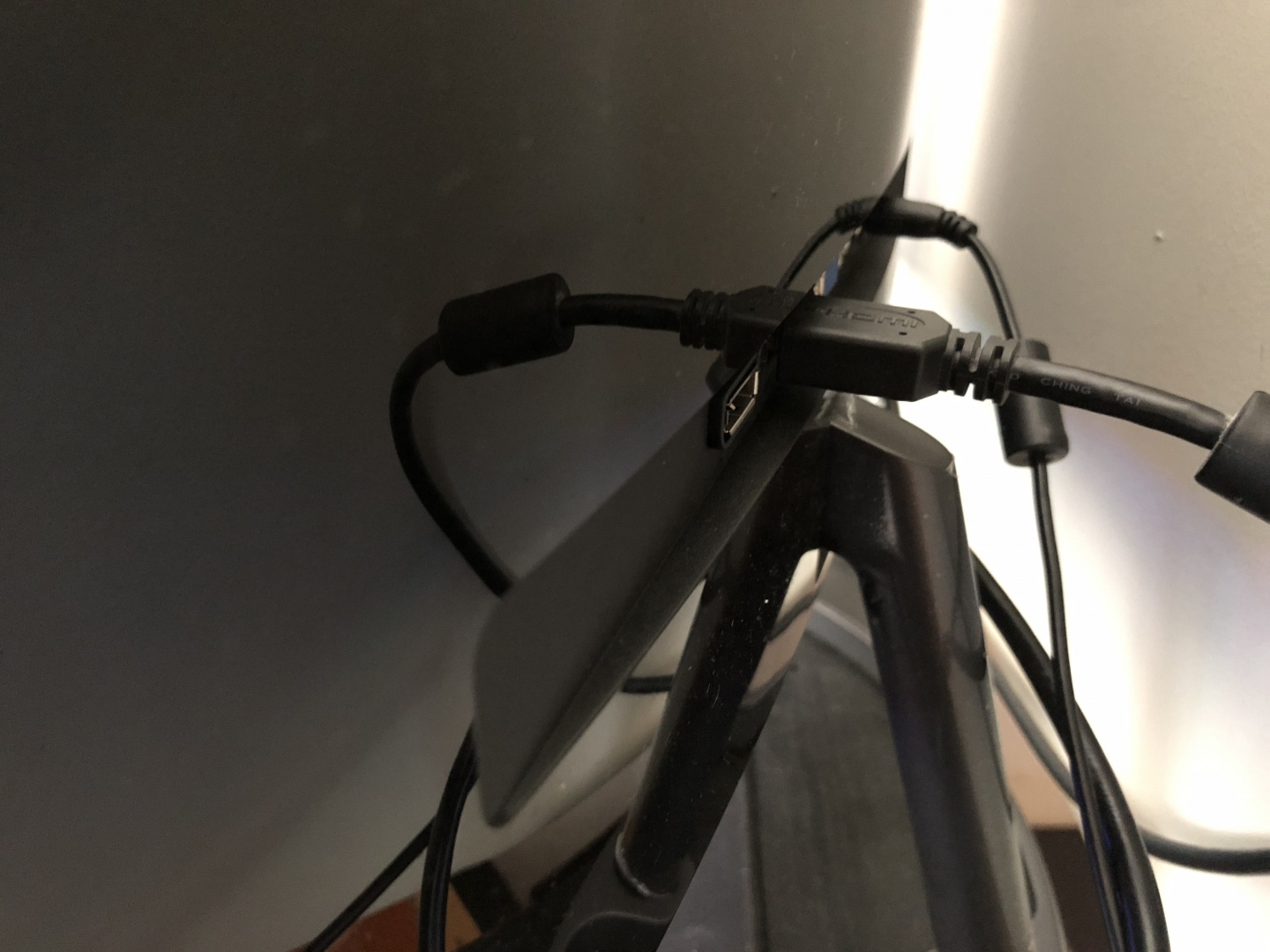 In terms of the display itself, this is where it redeems itself for the poor calibration settings – it’s simply beautiful. You will be of the opinion that a curved display in close quarters makes for a cinematic, vibrant experience — the Philips monitor encompasses that mantra. Colours are punchy, the panel bleed effect is nowhere to be seen, and everything becomes animated on the screen for you to be bewildered by.

If you aren’t a van of vibrancy and prefer a more ‘true’ experience, Philips offers preset settings to suit any needs you require; if you can find for the toggle for it, that is. For the default setting, the colour temperature is a lot more on the cooler side, with a slight blue tint to the whites, making the blacks appear almost pure in an OLED fashion. 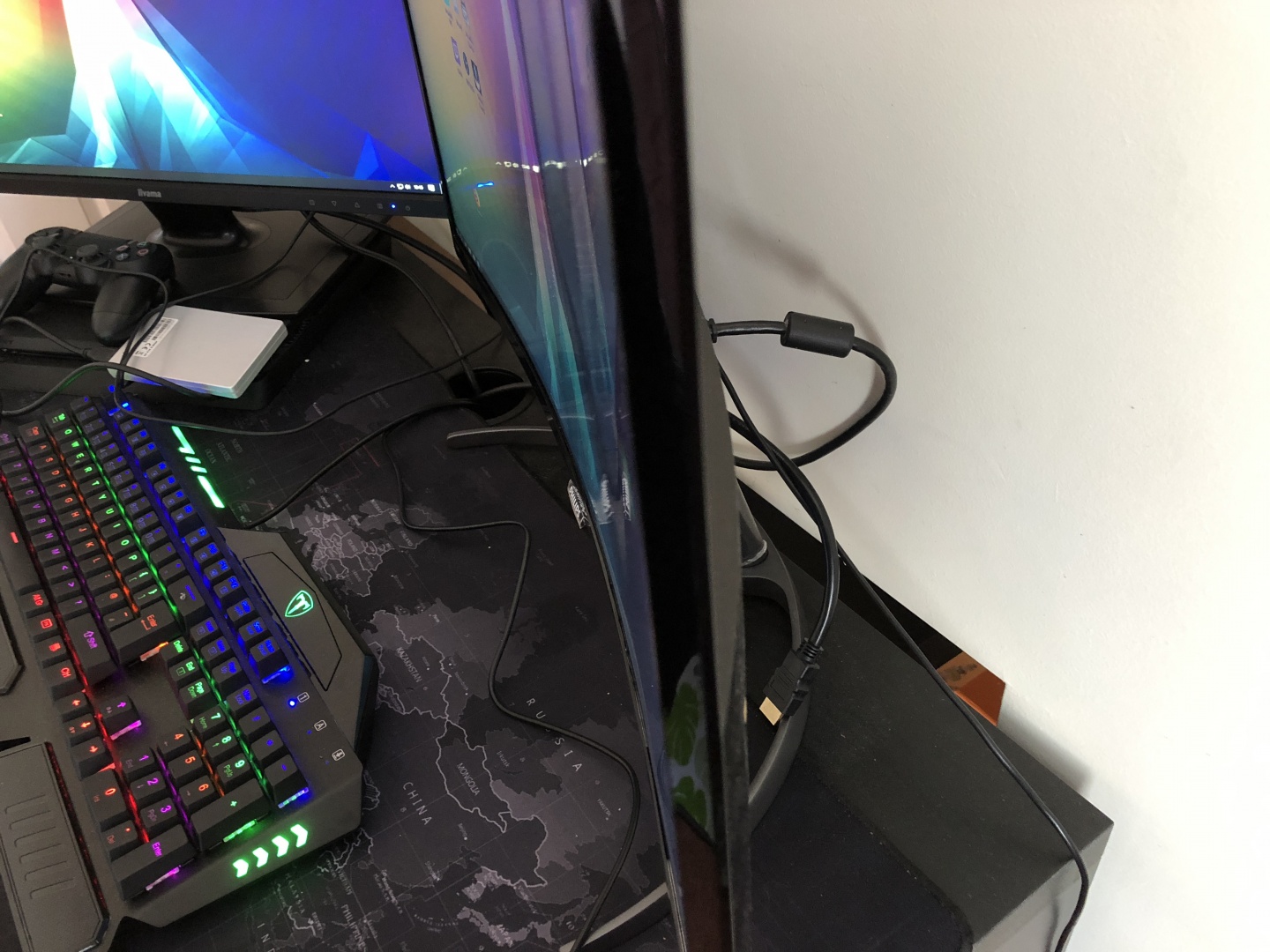 Poor implementation aside, there’s no denying that the display is just beautiful. Pure, unadulterated beauty. Watching a Netflix film leads you to believe that you’re experiencing it in IMAX, or you’re watching something you’ve seen multiple times before like you’re seeing it for the first time all over again. There’s something about a curved experience that makes you notice little things you rarely notice on a standard, flat display.

For the price-point this monitor is entering the market at, Philips had to prove a massive point to get people to burn a monitor-shaped hole in their pockets. For the most part, Philips proved their point exceptionally, but the one niggling issue with the setting configuration is almost a dealbreaker for me. I have had this monitor for the best part of 2 weeks now, and I’m still not used to how you change each and every setting. It got so bad that I had to keep a note on my desk as a ‘tutorial’ to getting to grips with it. 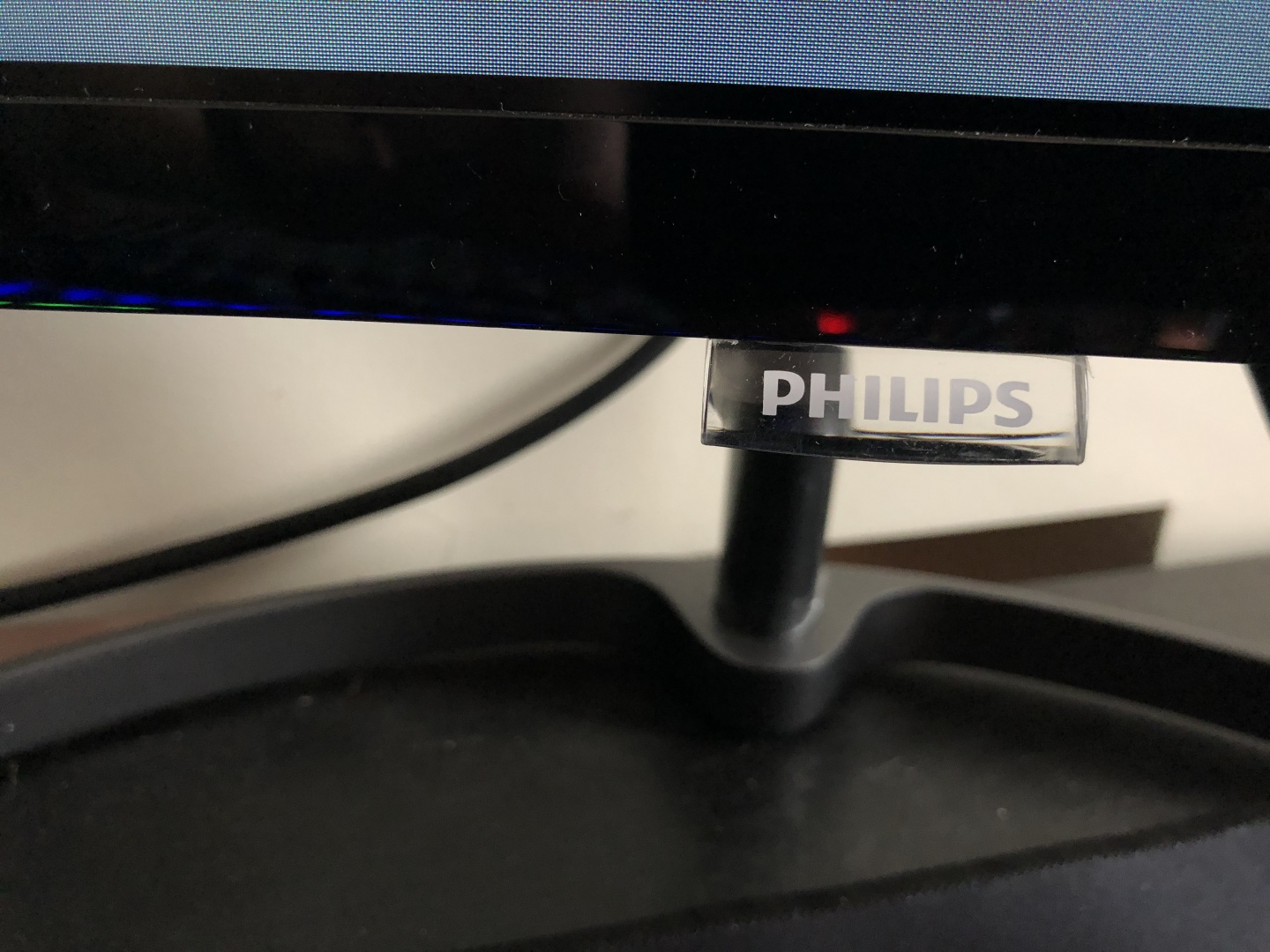 It isn’t all negative, though: the attention to detail, gorgeous display, and wonderful engineering are the redeeming factors of this fine piece of equipment.