Whilst we have covered many Bluetooth headphones and speakers one thing we haven’t covered much of is Bluetooth adapters. So when asked if I wanted to cover this I jumped on it. So let’s check out the “HIFI Bluetooth 4.1 Audio Transmitter & Receiver, Lenuo 2 in 1 Wireless Music Adapter for TV / Home Stereo System Headphones Speakers MP3 / MP4 iPhone and More” or as I’ll call it, the Lenuo Bluetooth Audio Transmitter/Receiver.

So as usual Lenuo did send this out to me for review. Meaning that I did not pay for the unit. Lenou have no input into the review.

Can I really call it an unboxing? I mean it comes in a zip lock plastic bag. As you look at you package the first things that you’ll see are the cables. A 3.5mm aux cord, Micro USB cable, and 3.5mm to RCA cable to be precise. Behind the cables you find another plastic bag with the unit itself as well as the user manual. The manual is a dual language manual. English and Chinese are the languages which means that it is all good for me.

On the bottom, left and right you won’t find anything but a pretty looking pattern.

To turn the unit on hold the button and the blue led will light up. Then plug the cable in what you want it to do and turn it off. If you want it to use it as receiver then plug it into the receive port. You then connect to it from your device. The blue LED will blink at a steady rate. The red LED behind the receive port. Then use it as you would with standard bluetooth earphones/headphones/ speaker. To turn it off hold the button till the LEDS go out.

Pretty simple. Once you’ve done once.

I’ve personally been using it in the device in receiver mode with my Sony earphones (MDR EX15LP to be exact) as well as my Superlux HD668B (find Mark’s review here) and there has been no issue there whatsoever.  No cutting out due to amount of power needed to drive them. When plugged into the unit they don’t sound any different to plugging them directly into my OnePlus 3. Besides once or twice the video I watching out of sync with the sound. however, it did however quickly rectified this by itself.

I did test it out in transmitter mode with a set of EC Technology earbuds (find Craig’s review here) with the unit itself connected to the headphone out on my PC. They paired up as they should and they were fine for playing back music. But when it came to watching videos there was a delay and the video was out of sync. No matter how many times I turned both the earbuds off and on I couldn’t get rid of this delay. I even tried using another set of earbuds. Taking a look online this seems to be a recurring issue when you try and use similar units. But apart from that it worked as expected.

As far as battery life goes Lenou claim that the 600mAh battery will last about 8 hours. In which I would have to agree. Infact I’ve gotten more out of it at times. I’ve been using this when I’m on my motorcycle. With the earbuds connected to the receiver port and running one earbud ran up through my jacket under my helmet. Drop the unit and the other earbud into a pocket and boom it works.

My commute to college is about 30 mins each way. So an hour there and back. Four trips in a week as well as a few pleasure trips. It lasted just over 2 weeks. I also went to bed with some music playing one night and 8 ½ later it was still playing. So battery is a huge tick.

To round of this fairly short review. If you intend you use the unit as a receiver on the go or you intended to leave it plugged into power into a HIFI system than for £14.99 you can’t really go wrong. The battery isn’t something to be concerned as it will pass the 8 hours stated on the Amazon listing.

However if you intend to use as a transmitter I wouldn’t bother. Unless all you are using it for is audio and don’t mind a little delay in the audio, then it is usable. Though at least you have the option to use it both ways.

If have any questions then leave them in the comments below or reach out to me on social media. You’ll find me on Twitter and Instagram @chriswallace959. I’ll be more than happy to help. 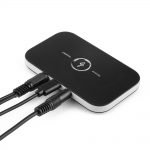