In what seems like a return to the 90’s generation where a rush for gadgets not just to be faster, but to be smaller, seemed to almost be an ideology, we’re looking at one specific area where portability is really still something new to the particular market segment. Projectors are, by their very nature either big and cumbersome, or small and noisy with poor quality. The Puridea Portable Wireless Projector looks to buck that trend. We take a look at it in our full review.

We’ve all seen the lavish setups straight out of MTV Cribs with cinema rooms and huge ceiling mounted projectors haven’t we? There is little argument that good projectors produce great cinematic ambience, and a still sought after viewing experience, however sadly that usually comes at such a high cost that us mere mortals are left to simply dream. The Puridea Wireless Portable Projector looks to try to at least alleviate some of the frustration wallet-watching consumers have. Let’s start with what you get for your £149.99 shall we?

In the box, which is an astonishingly small, square affair for a projector, comes the Projector itself, a rather cheap but frankly usable tripod, a user guide, and a UK plug with a microUSB charging cable. It’s at this point, when all the pieces are laid bare ahead of you that you realise just how small this Projector is. The cube shaped device is just 75 x 75 x 34mm and weighs in at just 186 grams. It’s tiny. We’ve seen Pico-like projectors before, and indeed we’ve reviewed one something similar (but for an entirely different use case) in the Touchjet Pond, but this is even smaller!

The Puridea Projector itself has the main ‘bulb’ to the front, capable of WVGA 854×480 resolution playback, and a maximum brightness of 50 lumens. To one side are an array of buttons with Power On/Off, volume up/down and menu back functions all available. On the opposite side there is a manual focus dial which isn’t overly sensitive, but gets the job done. On the rear is where we start to see a little more of what sets this unit apart from others at this price/footprint/quality. There’s an IR receiver for the remote control, as well as a rather standard microUSB charging port for ensuring that the 4800mAh battery is topped up with juice. Then there’s a microSD card slot for playing local media, as well as an AUX out to connect a speaker.

The device is very easy to set up. Turn it on by long pressing the button, and take to the user guide to familiarise yourself with some of the functions. The Puridea Projector has a few specific functions. It acts as a wireless access point so media can be cast to it and projected and it also has the ability to connect to other Wireless networks, so quickly set it up with your local one. It’s from this point onward that it starts to resemble a Chromecast. It connects to the home WiFi and acts as a DLNA renderer, which can be accessed by many smartphone apps for playback.

“The ability to wirelessly stream content to your device (in this case a projector) is something we’ve become used to in 2016.”

Playing media from a local microSD card is perhaps the easiest playback method. Simply load up your card with media, pop it into the slot, and navigate to the microSD card slot option. You’ll be greeted with a “Video” and “Picture” option. Select the one you want and your media is played without issue – most of the time. We did come across some issues when trying to play specific MKV files and some weirder and wackier extensions, but on the whole a good showing.

You Can Do Whatever You Feel…D-L-N-A

DLNA playback is where it’s at though isn’t it? The ability to wirelessly stream content to your device (in this case a projector) is something we’ve become used to in 2016 and Chromecast has brought that ability to the masses for an incredibly cheap price to boot. Here, the operation is similar. Once you’ve added your home WiFi credentials, selecting the DLNA mode will see a hotspot, as well as your local WiFi connections being made available. Visitors to your humble abode can simply cast to the hotspot, whilst family members or devices with local WiFi access can use that directly. The Puridea Projector offers up 802.11 a/b/g/n with support for both 2.4Ghz and 5Ghz bands. No AC, but the dual band support minimise the pain we feel here. As can be seen from the image, Puridea have done a good job in simplifying the instructions as much as possible and users can connect by using the on-projector prompts alone without having to reach for the user guide, which is saying something for a device like this.

“The 4800mAh battery is good for around 2 hours of continuous playback.”

There’s also a direct WiFi casting option, as well as options for iOS/MAC, Android and Windows, with the latter utilising Miracast to share the screen. Some really neat options here.

That’s all fine and good, but if the quality of the picture isn’t up to much, what’s the point of having all that connectivity? We agree.

Whilst not the easiest thing to capture, these shots were taken during a pitch black viewing of media thrown over to the DLNA receiver from a media server. The “Game of Thrones” (*spoilers!*) shots are taken from 720p episodes, whilst the “Friends” shot is DVD quality. Whilst the Puridea Projector has a native output resolution of WVGA, we managed to get ‘good’ playback quality on approximately a 52″ projection. That’s very good. Audio isn’t the best from the little device (albeit in a pinch it’s acceptable – presentations and the like) which is where the 3.5mm AUX output comes in. We hooked this up to a Bluetooth speaker we had lying around and the difference was immediate. Not only were we watching an episode (a good one) of Friends on a 50″+ projected display, we had decent audio from it, and there was next to no noise coming from the device itself as it was cooled by the internal fan, at about 4 feet away from the device.

“Okay, so that’s portability – check. Visual quality – check. That must leave battery life right?” Yup, you’ve got them there. They’ve only managed to pack in a 4800mAh battery in that unit. Obviously we’re jesting. The 4800mAh battery is good for around 2 hours of continuous playback. In our testing we managed two episodes of ‘Thrones, with a couple of minutes of browsing some images from our media server via an Android device before the projector bled dry. Again, for the size of the unit, we think that’s immense.

It’s not perfect however. There is some noise from the unit as you’ll be able to tell from the Video clips, and whilst you can project video to over 50″, a much smaller screen size (25″-30″) provides much better quality. At 40″ and above, the low contrast ratio of this device does start to tell and blacks become indistinguishable. Any genre TV show you’re hoping to cast will inevitably only be partially visible due to the love shades of grey they like to use!

Is It Right For You?

Well, that’s a question only you can answer. We can say that for size of the unit we were surprised with how well it performed. There are cheaper units though. For instance the Elephas LED Projector is just £53 and gives the same resolution. What you save in money however you give up in portability and ambient noise from the unit – we’ve tried this one too.

There are bound to be some compromises in a device this small. We’d love to have seen 720p resolution natively, as well as perhaps a companion app, but we’re quietly confident that, given the right circumstances (i.e. no bright light) most consumers wouldn’t regret this purchase. If of course you don’t need portability, then there are perhaps better devices on the market for similar costs.

In the end, it’s about the package like so many consumer gadgets. If you fit into the box that this device is aimed at, it’s a cracking piece of kit. 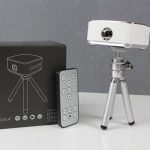