Pocketalk Translator Review: But Why?

Want to feel like Commander Riker on an away mission? Of course you do! The Pocketalk Translator manages to translate into 74 languages, is pocketable as the name suggests, has good battery life and a loudspeaker – so why aren’t I blown away by it? 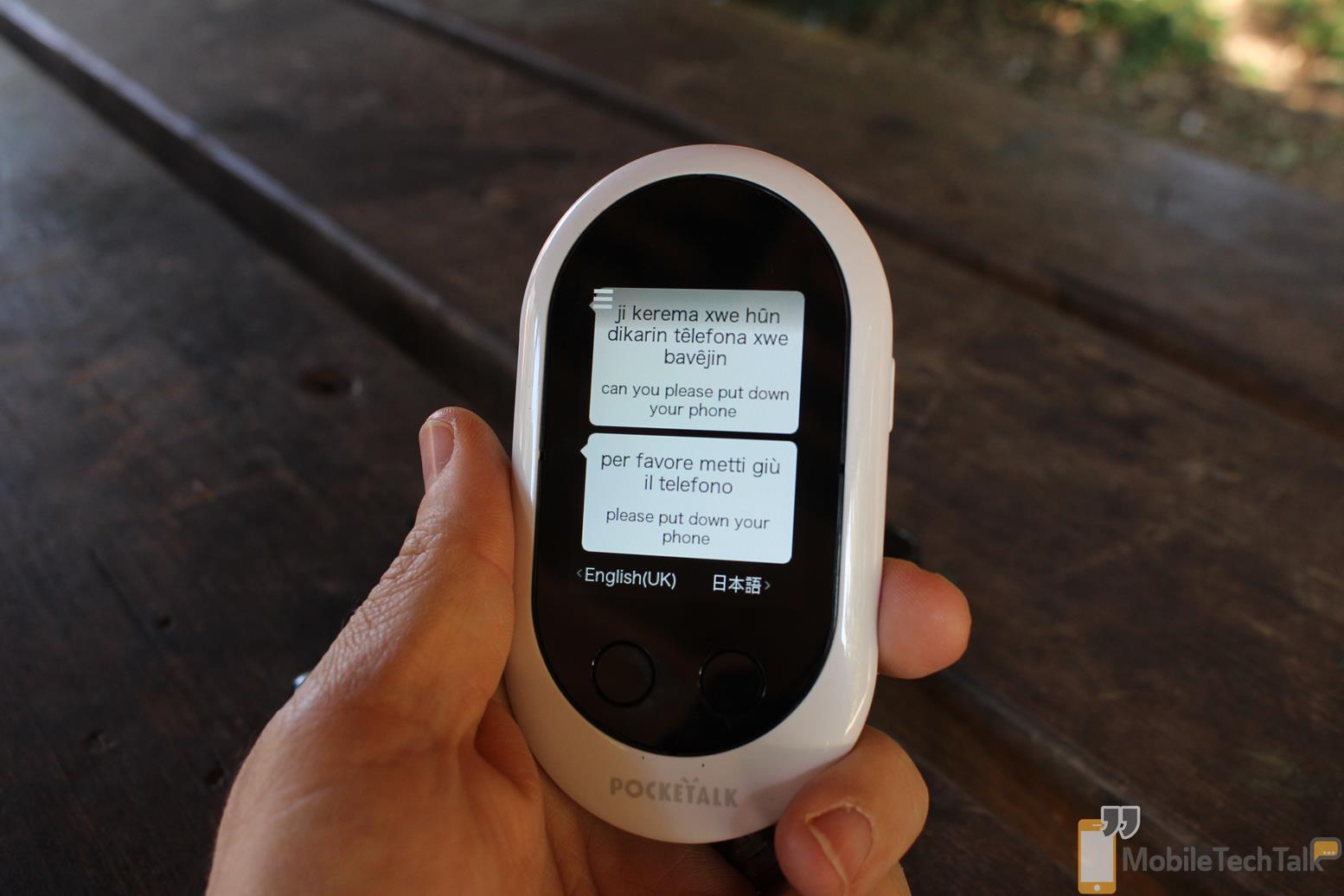 The Pocketalk Translator is exactly what the name implies it is. It’s a pocketable language translating device that can help you convey your sentiments in 74 languages.

The Pocketalk itself is a small, oval, palm-sized device which has a small 320 x 240 pixel touch display, with an easy, intuitive interface. There are only two buttons on the front of the device that govern which language you wish to speak in in order to get a translation.

There’s a nano-SIM card slot to enable you to get translations on the road, stereo speakers that get nice and loud, a couple of microphones, a Type-C USB slot as well as a power button. The physical buttons are clicky and feel premium yet plastic, and the touchscreen is sufficiently bright and sensitive to the touch.

Setup is easy. Connect to the internet (4G/WiFi – take your pick), and choose your home language and the language you want to translate into. It’s pretty much that simple. There are 74 languages included but not all are able to be spoken out loud by the Pocketalk which I found a little disappointing considering translation is the sole aim of this product.

The selected languages will then be represented by the two buttons on the front of the display. In my tests, I tried some of the more well known European languages to ensure I could check then against other translation services (read Google Translate). Pressing on the left button (for me – I had English established as the left-most language) triggers a beep to alert you to start speaking. Within a second of the recognition, your right-most language is read out, as well as pasted to the screen in real-time. Of the tests I performed, only 1 was significantly different than the result on the Pocketalk, and that was a Farsi translation. All of the European and African tests I performed seemed to be spot on based on my Googling.

Brightness, volume, connectivity, power management, and much more is available to be configured in the settings menu. Users can also change the size of the text, which on a smaller display such as this is a nice little addition.

In my testing, the battery will last you anywhere from 6-8 hours depending on use, and recharge time is pretty quick. I think that battery life should be enough for most people looking to use a device such as this.

Let’s take a minute to look at the use cases for the Pocketalk, as I can almost hear many of you shouting at the screen that smartphones actually exist and have some of this functionality. First up, let’s address that point. Whilst existing smartphones can translate languages pretty well already, they aren;t in real-time, they do lack some of the nuance and context that a real native speaker would bring to the table during a conversation, and they require interaction with the device itself. Perhaps you’re travelling to a far-flung part of the world where you don’t particularly want have to pull out your expensive smartphone every time you want to ask for the nearest toilet. It might increase your risk of losing it, having it stolen, or simply damaging it, not to mention draining that precious battery life.

Furthermore, the Pocketalk has excellent microphones and speakers that can pick up what people are saying from up to 10-metres away which some smart devices would struggle to compete with.

Finally, there’s the telecommunications in a particular country to contend with. Signal and data speeds can be sketchy in some countries, and can also be expensive. Purchasing the £259 option delivers a bundled global data SIM which includes all-you-can-use data for 2 years (a non-bundled data version is available also) and avoids this particular issue in many cases. 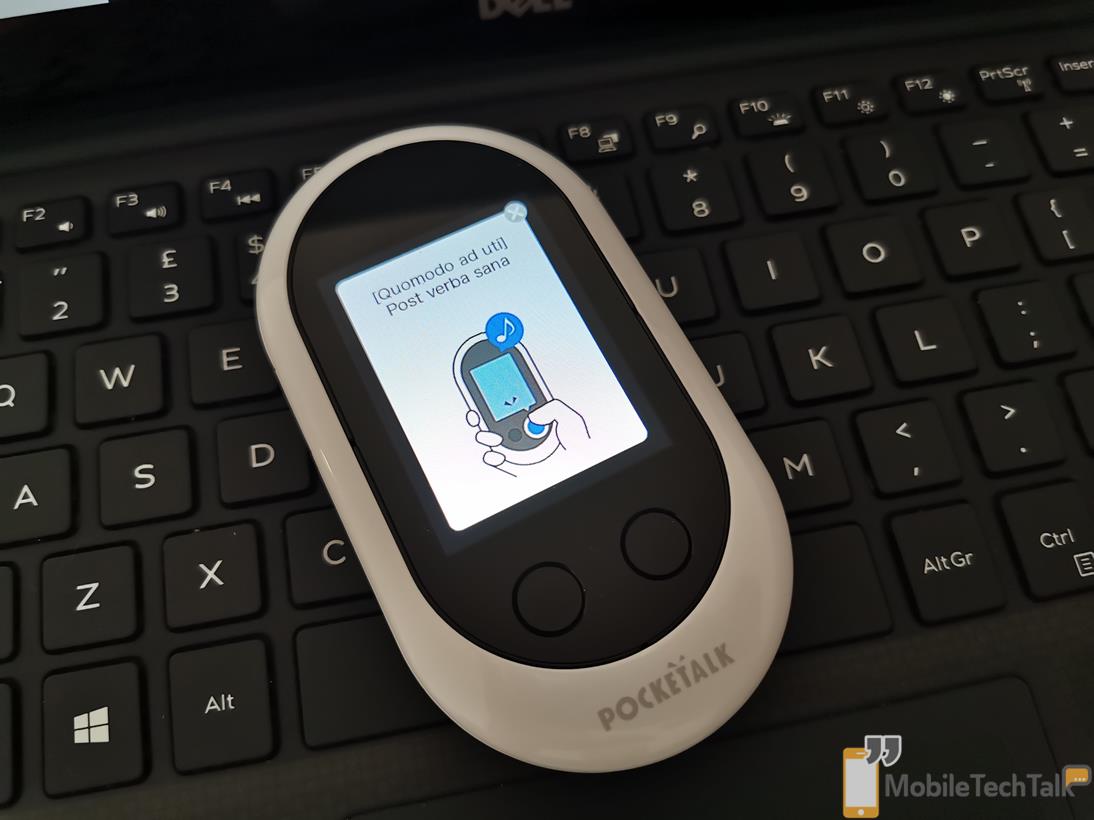 The Pocketalk is around the same price as a budget Android smartphone currently. The arguments I presented above are true; Google Translate on an Android device is not real-time, does use your smartphone battery and whilst you’ve got it out, you might be a bit of a target for theft.

An Android smartphone, however, such as the Motorola One Action is £220, delivers the latest, more power-efficient Android 9.0 and a more powerful chipset, as well as delivering much more utility. Given that the vast majority of people nowadays already own a smartphone, I find it a difficult task to recommend the Pocketalk for anybody but those with the most niche use cases,

Having said that, if you’re in the market for a translator that is pocketable, and you’ll be travelling to some inhospitable places that aren’t conducive to smartphone use, then the Pocketalk is right up there with the best money can buy currently. The fact remains I doubt this speaks to very many people.