I have many devices. 3-4 Android devices, an iOS device for work and 2-3 Windows 7/8.1 devices. I’m not short of devices upon which to create articles. However, only 2 of the above devices have physical keyboards, so when 1ByOne reached out and asked if I’d take a look at their multi-OS Bluetooth Keyboard, I was intrigued. This is my review of the 1ByOne Wireless Bluetooth Keyboard.

Many starting to read this will have asked the same question as I did when we received the device. Are bluetooth keyboards still relevant? That’s precisely why I agreed to take this device for review. As I mentioned above, this device might help to fill a particular void in my tech bag and its relevance is easily determined during a standard review period.

It’s true to say that many devices have VERY good software keyboard implementations be they on Android, iOS, Windows Phone or indeed Blackberry. It’s also true to say that very few are an improvement on, or even a match to a physical keyboard. The 1ByOne Wireless Bluetooth Keyboard’s aesthetic might give a glimpse into the overall success of this particular product. Function is the name of the game. You’ll find no beautifully crafted aluminium chamfered edges on this device.

To that end the 1ByOne Wireless Bluetooth Keyboard is delivered in a matte black, plastic build with a large multi-touch touchpad below the space bar, centred. There are no trimmings, ports or additions on any edge or on the back aside from a lone micro USB port for charging on the right hand side. The keys themselves are a similar chicklet style you’d find on most lower end laptops. Don’t expect any special switch mechanisms or key caps here. The keys continue the same matte black finish with the slightest hint of texture on them which provides minimal but just acceptable grip whilst typing. They are otherwise completely flat and unassuming. All the usual functions are available here. For Windows users there is a full row of function keys along the top of the keyboard which double as multi-tasking, cut/paste, media player and browser/email launch buttons for other operating systems. There are also Home, End, Page Up and Page Down buttons which are accessed, as with most laptop offerings, via an “Fn” key. 1ByOne have done a good job of replicating a laptop typing experience with even a button dedicated to turning off the touchpad to avoid accidental presses during elongated typing sessions present.

There doesn’t seem to be any specific cardinal sins in their deployment of the keyboard. The keys are a little mushy but adequate. The shortcuts utilising the Fn button are easily learnt and the size of the keyboard is small enough to be portable but large enough to be acceptable for productivity. There isn’t a lot of room for error though.

The keyboard has a relatively small form factor at 173mm x 80mm x 259m. Within this thin frame is housed a 500mAh battery which is apparently good for up to 90 hours of continuous use courtesy of its bluetooth 3.0 technology, as well as a whopping 4 months of standby time. We’ve not managed to wear the battery down as yet and I’ve been writing a number of articles, browsing on my tablet and leaving it in standby in the week I’ve had the device. In fact, my Xiaomi MiPad has run out of juice twice during that time and the 1ByOne Wireless Bluetooth Keyboard keeps on trucking! Impressive. It’s not all good news with this device however. Whilst the design is, as previously mentioned, functional, there are areas of this device that are clearly built to a budget price point. The touchpad is one particular area of ambiguity. It does work. Placing a finger on the touchpad and moving around will result in the all too familiar wanderings of a pointer on the screen. That much is true. Using the touchpad for any period of time however will result in only a modicum of accuracy over the span of a typing session (especially on Android. Windows is slightly better). Its main flaw is the texture of the touchpad. It’s made of the same plastic and textured similarly to the rest of the keyboard which provides only minimal grip and sensitivity. Using the touchpad on Windows provides a slightly better experience, but it is still by far the weakest part of the device. If using a touch-enabled device users would do well to use the keyboard in combination with the touchscreen to provide a fully functional experience.

This device has served me well during my review period. I’m never normally sold on bluetooth devices. So many are seemingly poor mobile/portable substitutes for larger and more functional devices, be that keyboards, speakers, mice or other input devices and peripherals.

In the 1ByOne Wireless Bluetooth Keyboard however, I’ve found a bluetooth peripheral that I personally have a little soft spot for. The keyboard is functional. The media player controls are accessible and a neat addition. The Android specific controls such as the home and back buttons work well; again functional.

This entire review including images has been compiled using the 1ByOne Wireless Bluetooth Speaker and frankly it’s not been too difficult. The more difficult part was using Android with its foibles rather than a native Windows device to write this review. That alone is testament to the fact that Bluetooth keyboards aren’t necessarily dead. They are hibernating, awaiting for those that really need them to find them rather than the other way around.

Unless you need to regularly create content or be productive on a non-desktop operating system, you’re unlikely to look twice at this sort of product. If you are however in the market for something like this, at a price of just £13.99 from Amazon, you’d be mad not to at least give it a try. I did, and I wound up keeping it and writing a few more articles using a more compact device than I’m used to.

As a consumer, if you’re after a peripheral of this type, take a look at the 1ByOne store on Amazon or their website for more products like this. Their price points are great, they have a large catalogue of products to choose from and as this review can attest, they perform well. 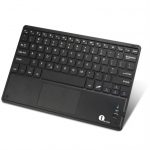