Optoma ML330 Review: Stay for the image, Ignore the smarts

What’s this? Another projector review? And another projector from Optoma? Well, yes. For 2 reasons, they asked if I wanted to check out their new projector, and they also happen to make really good stuff, so it’s hard to turn down, So this is the Review of the ML330 from Optoma.

Disclaimer: Optoma provided us with this product for review, they did pay us for the review, and we have not been able to keep the unit. This unbiased review was conducted after 6 weeks with the Unit. 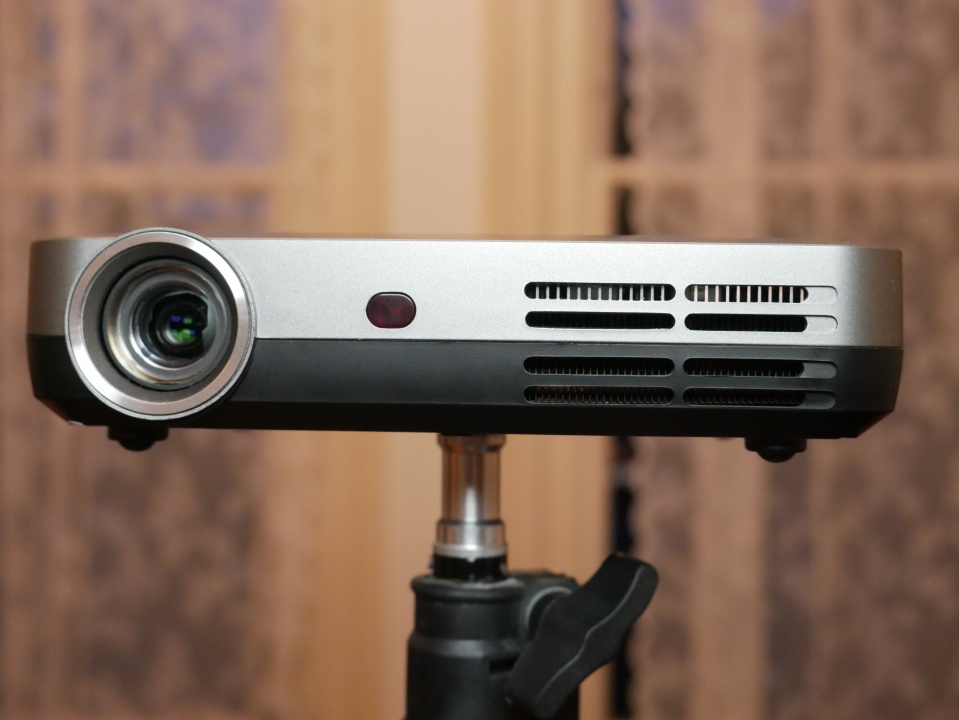 P.S. This Review was originally meant to be published in late January, but due to a bug on the website, it was unknowingly deleted before the draft had been published, Optoma recently brought this to our attention and we wanted to rectify this.

If you want to see the entire specification sheet from Optoma, you can, Here.

The ML330 is actually one of the sleeker mobile projectors I’ve checked out, and not even limited to Optoma. The slim, slender design really does make you want to move it around more. Unlike the ML750st, the lens in the ML330 is much smaller, and better integrated into the overall design (though it should be noted, the ML330 is not a short throw projector, like the ml750st is.) it just looks cleaner, as if more time and effort was put into the design. 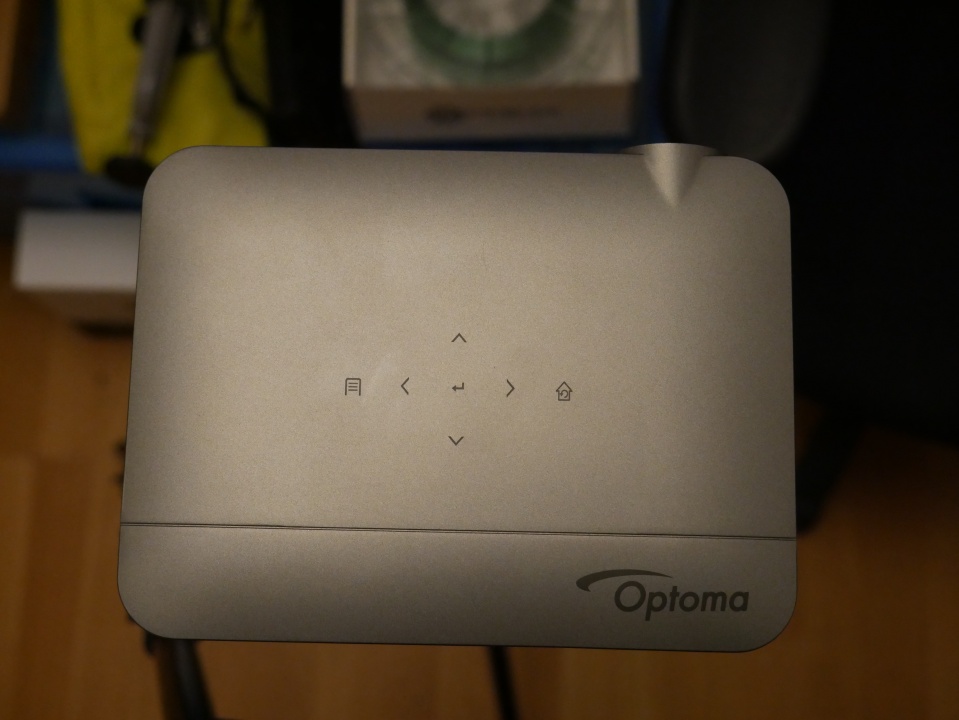 What I wasn’t so much of a fan of, hardware wise, was the colour, the grey-y Gold colour wasn’t my favourite, and the few times I did take it out of the office to other places, that was brought up, and not always for good reasons. I personally feel that portable projectors should be as nondescript as possible, with black, dark grey or silver. 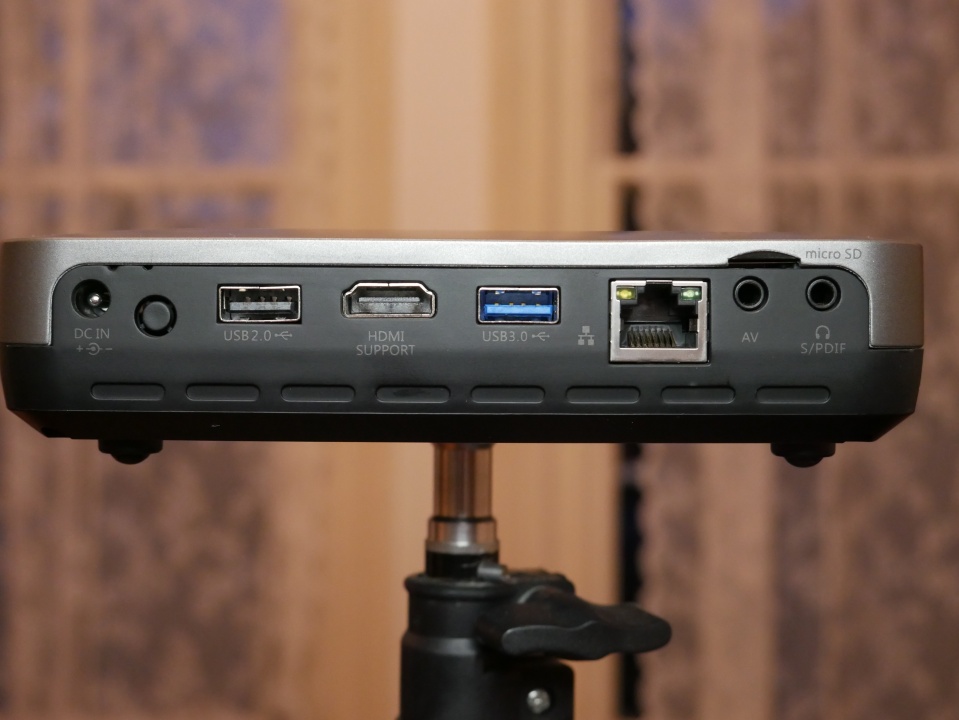 The ML330 is an all-plastic affair, which is fine, I’m not expecting something at this price point to be a chunk of aluminium which just so happens to have the innards of a projector in it, and Optoma has made this in a way where it doesn’t feel flimsy. The plastic doesn’t creak, crack or deform under normal circumstances, which is nice. 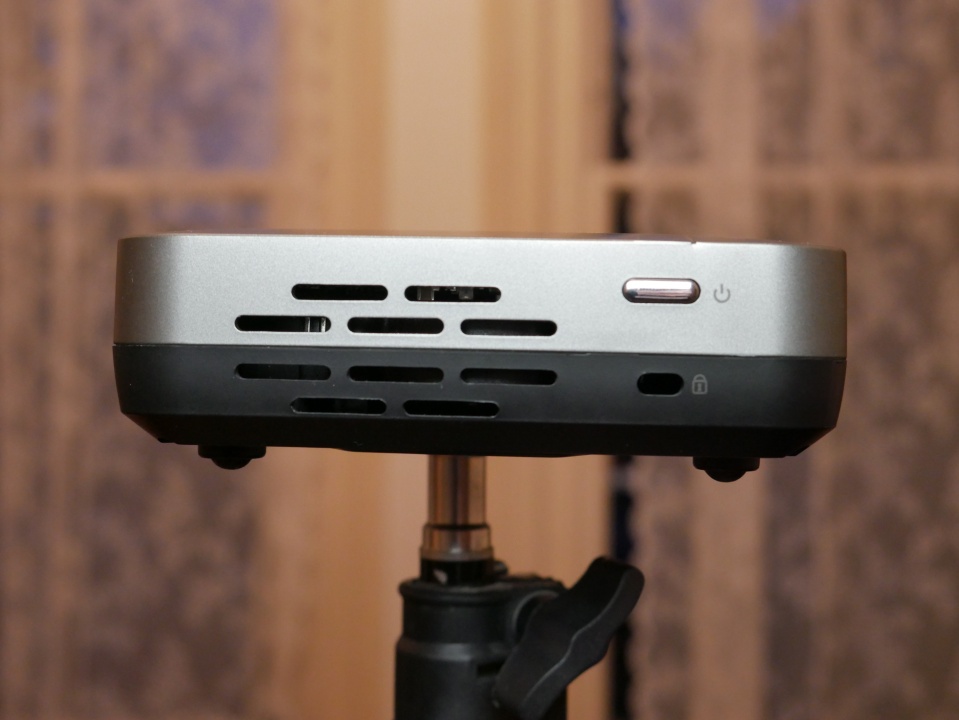 Having a look at the machine, on the top we have the controls for the smart portions of this projector, these are just capacitive buttons. They are a 4 way directional pad (up,down, left and right) a back button in the centre, a menu button on the left, and a home button to the right. These buttons are pretty well hidden, and don’t detract from the look all that much, though I feel these could have been disguised a bit better by making the paint thinner where the buttons are, meaning that when they are not backlit, they are invisible but apply a light behind the thinner areas, and voila, you have buttons. Moving around to the back and you have your full assortment of I/O, including USB, HDMI, Ethernet and others. Personally, I would have dropped one of the USB ports for a second HDMI, as I’d rather have a cheap USB hub, than a finicky HDMI hub/switcher. 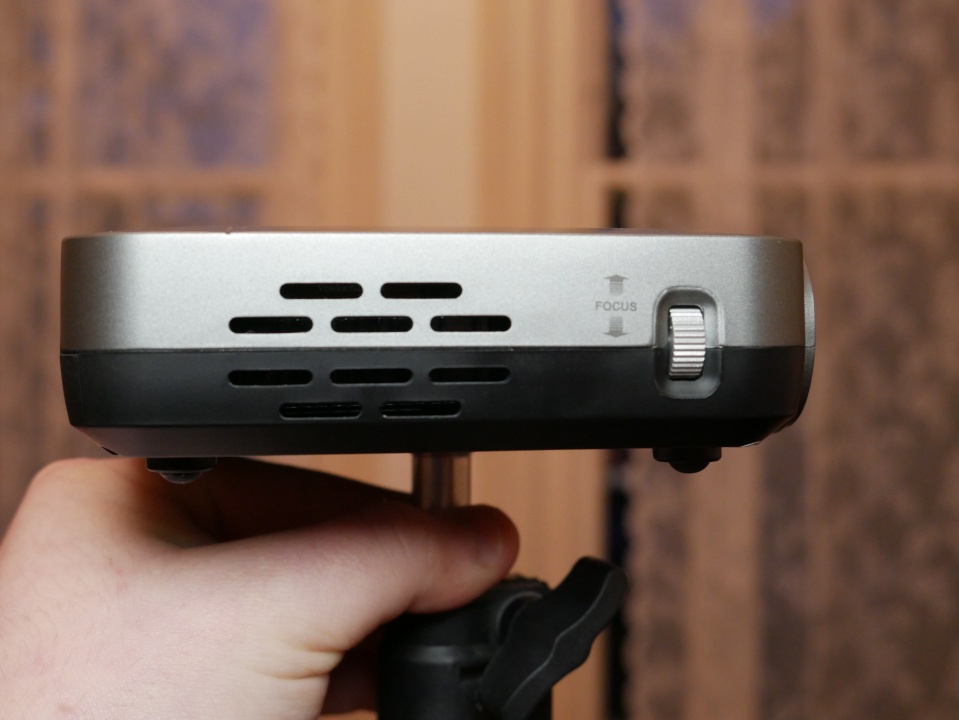 From the right hand side (if you assume front is where the lens is) all you have is some ventilation holes and the power button, this feels a bit shallow and is somewhat small, but it gets the job done, it’s a power button, it’s a metallic plastic, but it is fine, I just wish it had a touch more depth, and maybe some more tactile feedback, but it is most certainly usable in it is current configuration. On the left-hand side, we have some more ventilation, but also the focus ring for the lens. This is perfectly usable as well, but I feel that there was a little bit too much tension on the rotator, meaning increased pressure was needed to be put on it in order to change it, I know this is nitpicking, but for something as important as the focus ring on a projector, until we get reliable auto-focusing on projectors, the focus ring needs to be perfect. 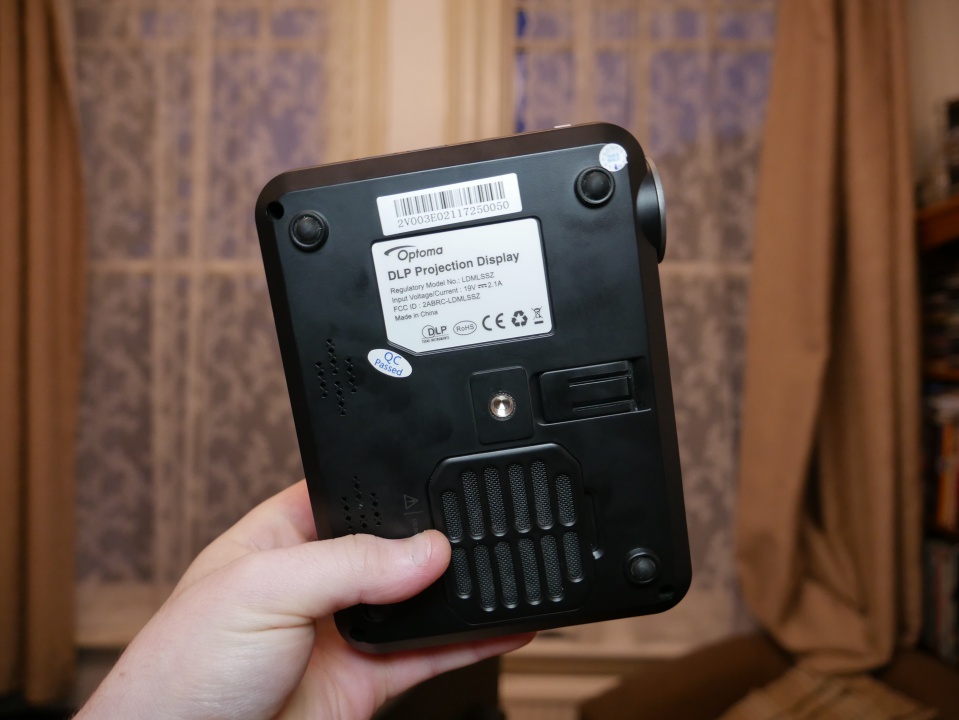 Up front, we have the lens, some more vent holes, and the IR receiver/blaster for the remote, a simple affair, and nothing more than it needs to be. Lastly, we have a look at the base of the projector. Aside from an assortment of what I assume are a mix of ventilation holes as well as speaker grilles, we have the two most important features, the ¼-20 tripod thread and the little flip-up foot. Let’s start with the easier one, the ¼-20 tripod thread, this is a dream, makes mounting this thing a piece of cake, if you have a tripod, you have a mounting solution for this, and that is awesome. I personally have a miniature tripod in my bag for this, but when I was home, I had a mount made up with a ¼-20 threaded rod through it, so I could mount the ML330 on my wall and project on to my ceiling, and it was pretty awesome and convenient. Now, the Little foot. I wanted to like this, I wanted to use it, and I tried too, but it has too many issues. Mainly it’s size, it doesn’t actually lift the projector that much higher off the surface of the table. It’s also an incredibly narrow foot, meaning that it is remarkably wobbly, so unless the surface it is on is rock solid, expect the image to wobble around more than a drunk person on a mechanical bull. 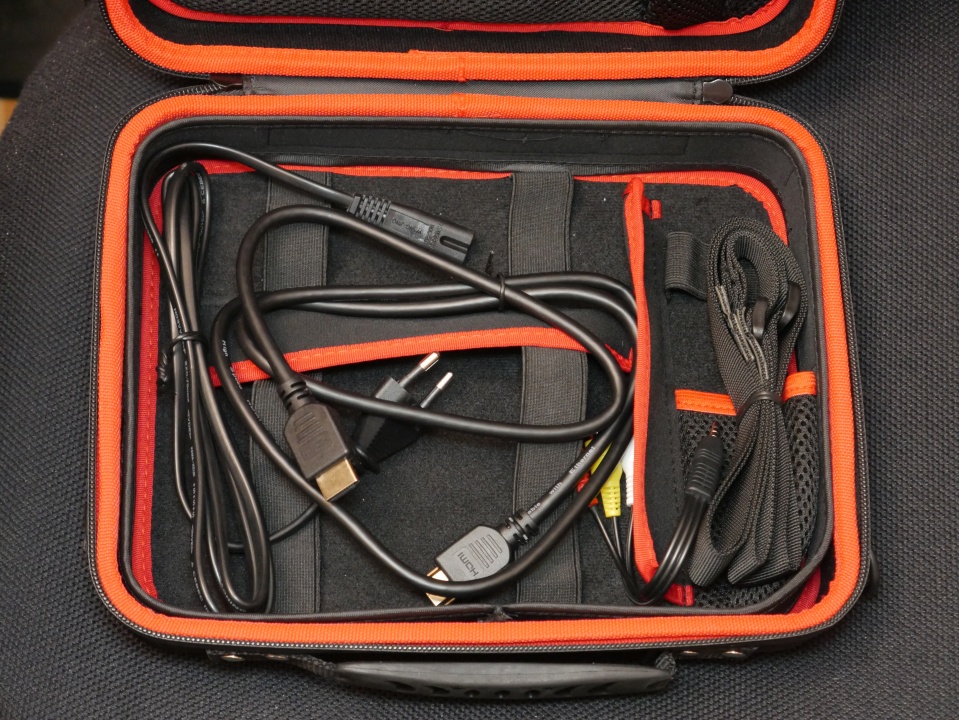 There is no point in owning a projector if the image quality isn’t good though, just look at my review of the Rif6 Cube for that. Having reviewed my fair selection of projectors from Optoma, I knew roughly what to expect, and I wasn’t disappointed. The ML330 had most everything I loved from the ML750st without the short throw lens, which meant that the colour, clarity, easy focusing, and brightness was all still there. 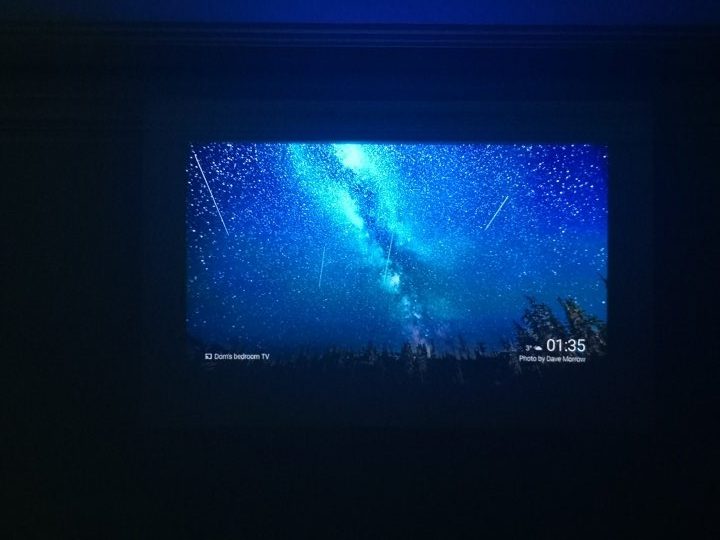 It really does astonish me what Optoma is able to do with just 500 Lumens here. It might partially be where I am using it (projected onto the ceiling for the most part), but It does give the impression of a much brighter light source. I also find that the colours of an LED projector are much crisper and clearer than those of a traditional bulb projector. I can’t tell you why, because I’m not quite smart enough, but I do know what I see, which is a much more enjoyable image that would be possible on a similar size projector.

If I had an issue with the image, it’s nothing to do with the projector, but more to do with me, the “throw” of the image (distance between projector and image surface) is just a little too long, meaning you get a smaller image. For me, the ML750st with it’s short throw optimised lens makes for a more pleasing image and experience, but if you have a place that you can sufficiently place the projector from the projection surface, I don’t think this will be an issue for you.

This is the section I didn’t really want to write because speaking honestly, the Android “smart” part of this projector isn’t all that good. Starting off with the most egregious thing, the projector uses Android 4.4 KitKat, for those unaware, we are just coming up to the release of Android 9.0 P (We do not know the official name yet) and Android 8.1 Oreo has been out for over 5 months. KitKat was announced on October 31st 2013, 4 and a half years ago, this is absolutely insane. 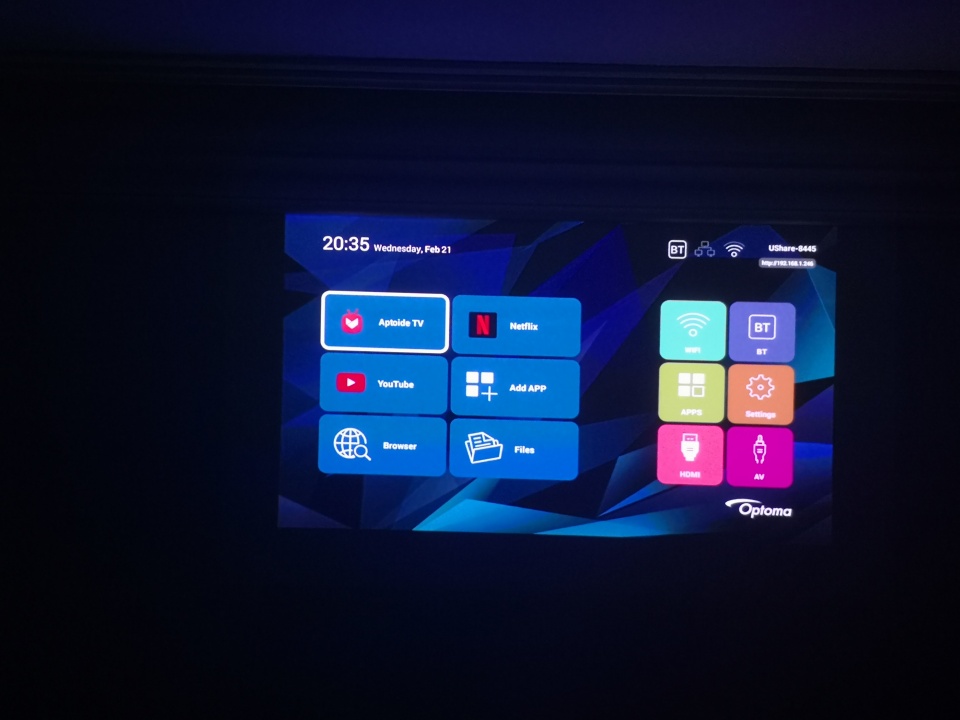 The other part that makes this a not great experience, is the fact that it doesn’t even support the Google Play Store with Google Play services, So any apps or games that you’ve purchased through the play store, none of those are available to you on this device. Sure, there are games and apps to download, such as Netflix etc, but the installation procedure is less than optimal, you’re sideloading the apps, so updates are not as seamless as they would be from an official store. 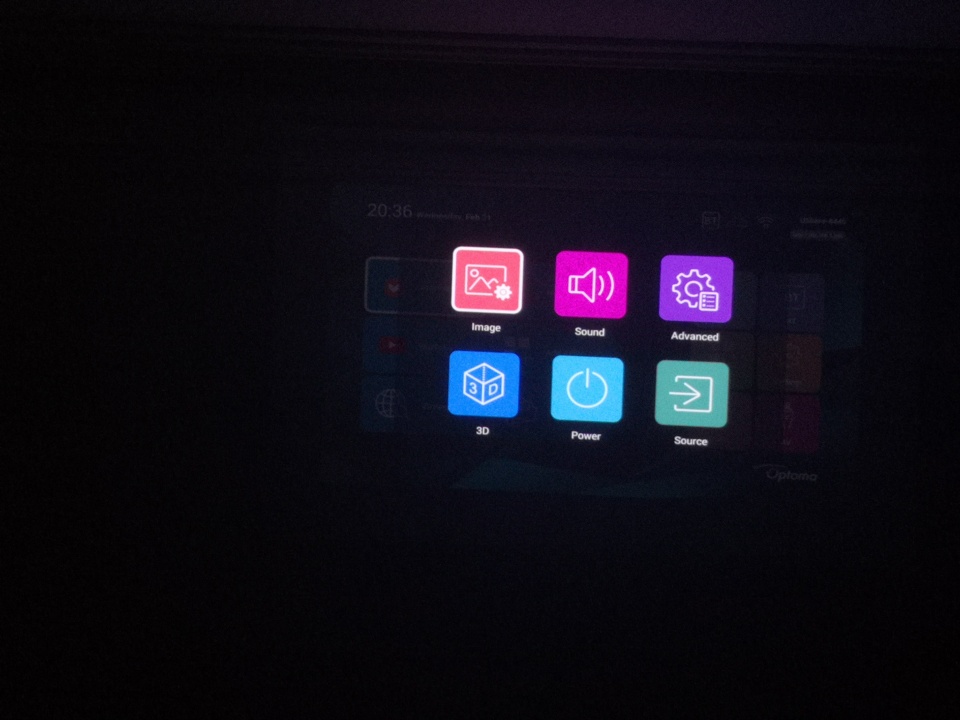 Most of my testing after the first few days of using the built-in “smarts” was done with a Chromecast attached because this gave me control to cast whatever media I wanted to the projector without having to use the AOSP build with a tacked on “leanback” launcher. I also tested for a day or two with my FireTV stick, which worked very well, the image looked crisp, audio passthrough for HDMI was solid, everything just worked as it should. 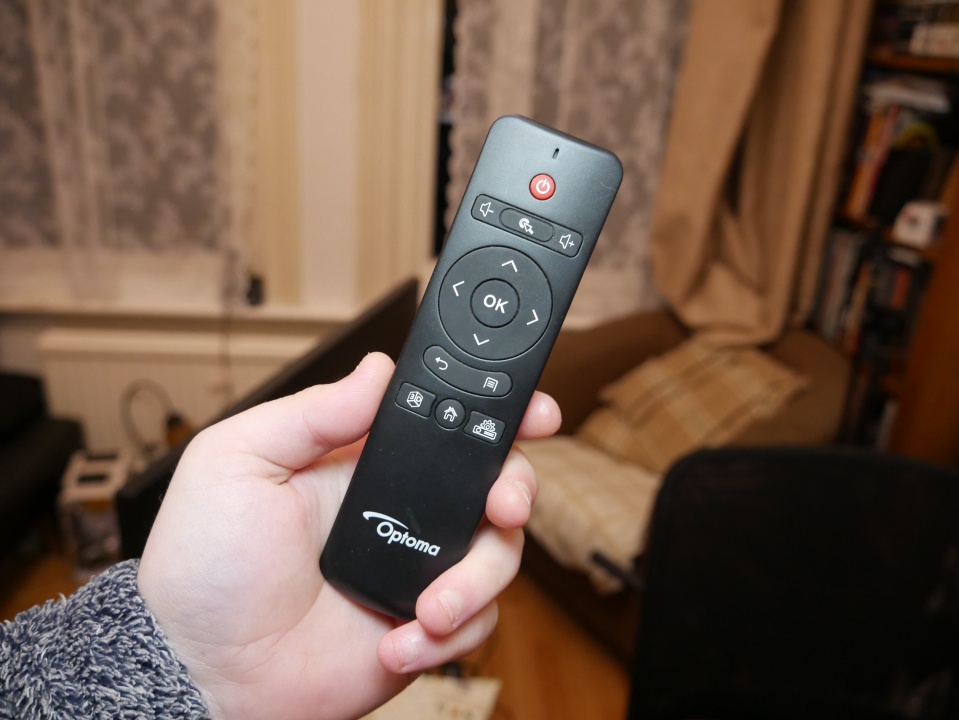 My one hope for this section is that Optoma sees this, and doesn’t repeat their mistakes here. Partner with Google or Amazon, get either Android TV built-in or the Chromecast UI just like Vizio did a few years back. Or do what TCL is currently doing and work with Amazon and get the FireTV user experience baked into the projector. I would personally prefer AndroidTV, but I do know that the licensing is strict, but I do think that it provides a much better experience than the one the ML330 currently provides.

Overall, the ML330 provides an awesome experience… As long as you don’t put too much faith in the bundled “smart” experience. The unit comes with stellar image quality, bountiful I/O and at a reasonable price. It’s small, but packs a punch, and is something I was more than a little sad to have to send back to Optoma. 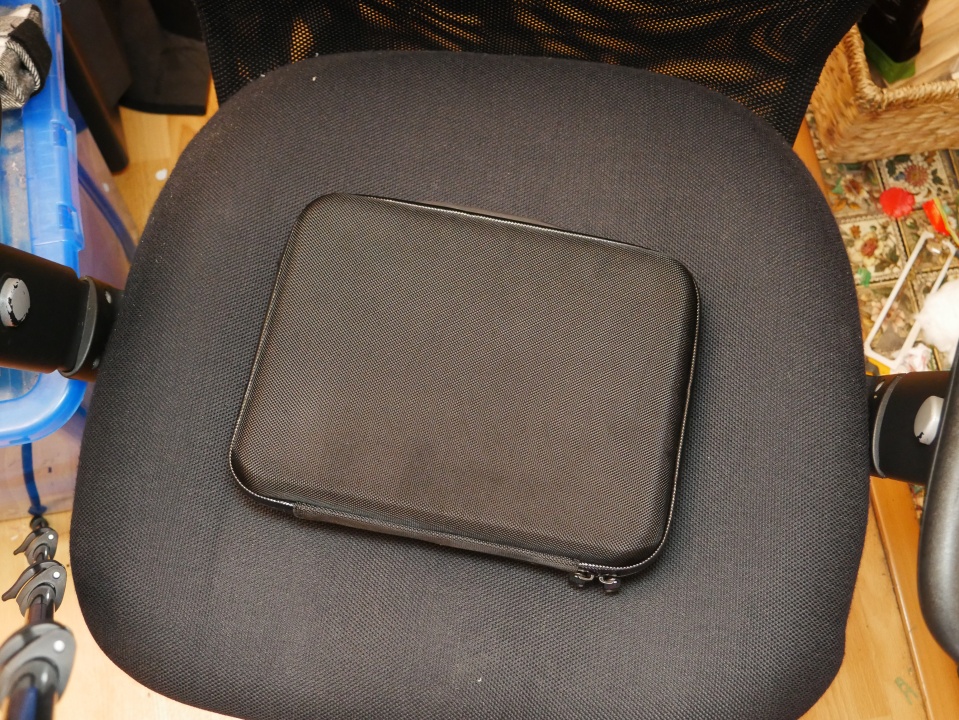 Are you in the market for a small, portable projector with an image that punches above its weight class? Then check out the ML330.