Optoma are no strangers to us here at MTT, we’ve reviewed a fair few of their projectors and a few of their headphones too, so, when Optoma reached out to me asking If I wanted to review the successor to last years HD28DSE, the HD29Darbee, I had replied yes and signed the loan agreement before I had even had my first coffee. (Though, I do apologise Penny if there are any Typos in that email). So how does it fair? Spoiler, really, really well.

Disclaimer: Optoma UK provided me (Dom) with the HD29Darbee for review for 14 days. No money has exchanged hands between either company and the projector is (sadly) on it’s way back to them as I write this. Whilst Optoma provided the projector sample, they have no bearing on the outcome of this review. 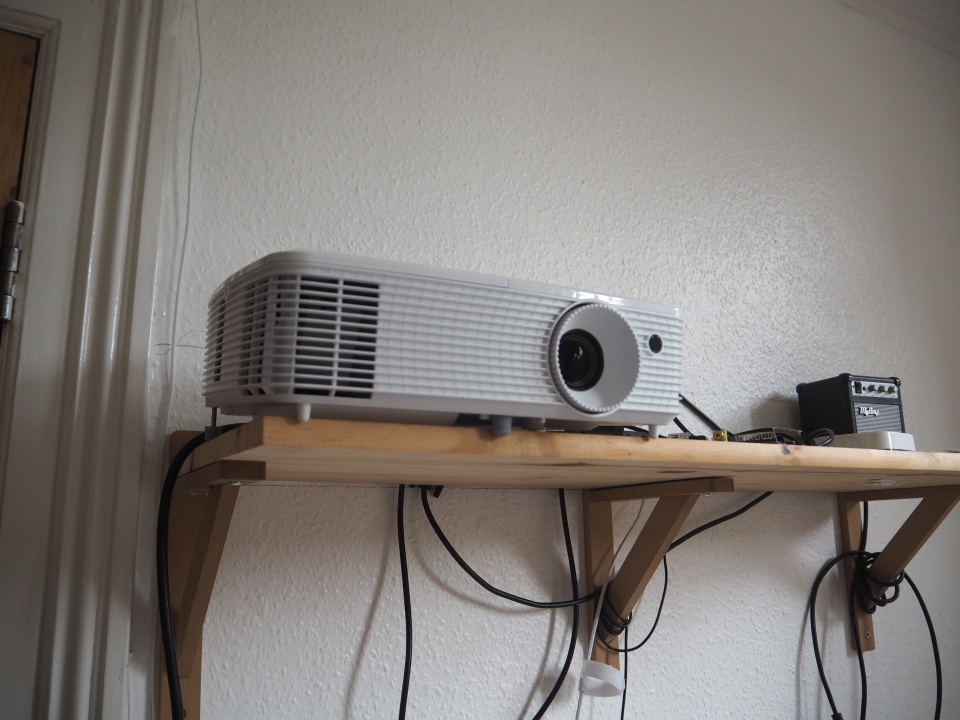 For more specifications, head on over to the HD29Darbee page from Optoma here 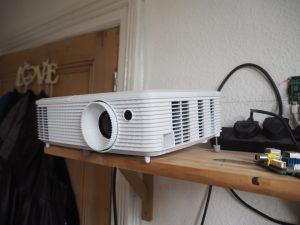 If you want a quick and easy description, I’ll give you a sentence and then you can jump on over to the projection quality section.

Now if you actually want to know about the projector, this is where I get to wax poetic about it. Whilst I’m still not a fan of the Glossy white plastic exterior of the HD29Darbee, it’s less obtrusive than you’d think, especially if, like me you have the projector on a shelf above and behind you, still I would have much preferred a black projector, glossy or matte, but that’s very much a personal preference thing that I’ll keep mentioning until Optoma ship a black projector.

At 2.38kg the HD29Darbee is also lighter than I’d have though whilst also being appreciably smaller. Let us not kid ourselves though, this isn’t a replacement for the ML750st (Review of which can be found here) that was a projector that weighs 420g and was designed to be portable, it even came with a carrying case. But in the scope of other stationary projectors, the HD29Darbee looks and feels quite a bit smaller. For comparison, the HD28DSE from last year was: 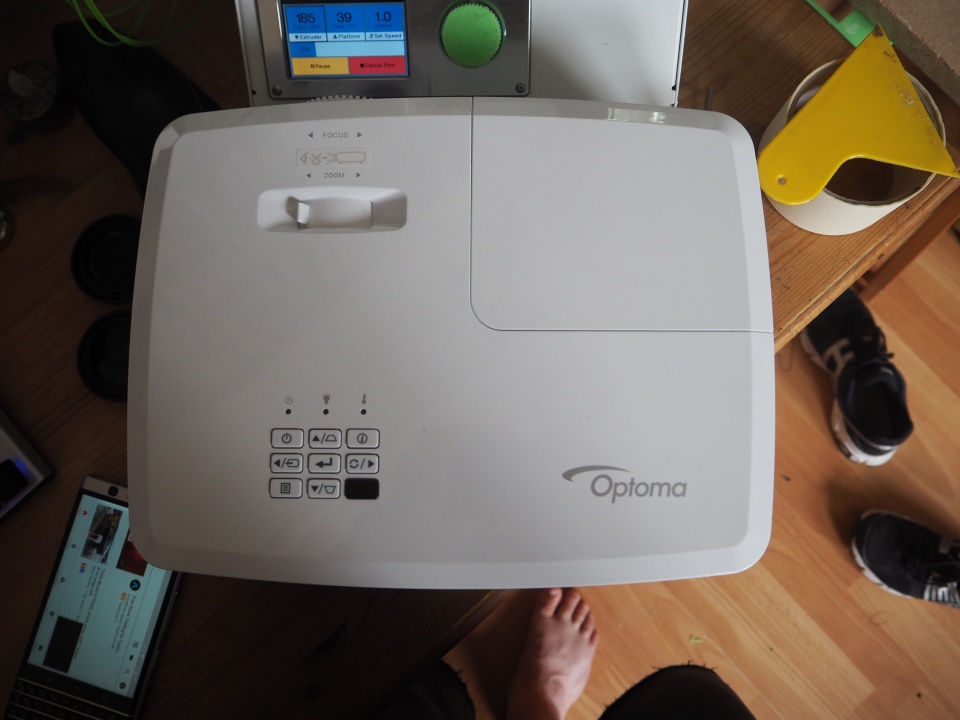 So compared to last year, you’re nearly 20mm narrower, about 18mm shorter, and only 6mm deeper, as a result, you’ve also lost about 200g of weight off of it as well, this seems like a bonus in my book. The I/O hasn’t really changed since the HD28DSE, but it has been relocated, where it was on the side, it is no on the rear, which, coupled with the extra depth of the HD29Darbee, I’m not the biggest fan of. For me it wasn’t too much of an issue, as my Projection shelf was designed to accommodate a much older and larger projector which has much larger inputs (DVI and VGA for example), but with the increase in depth, and reduction in width, I would have preferred for the bulk of the I/O (bar, the power input) to have stayed on the side of the projector.

On the left and right of the HD29Darbee is all ventilation. I think this is more of a preventative measure rather than a necessary one, seeing as the projector is remarkably quiet in operation, so my guess is loads of ventilation and a larger fan moving slower so a lot of air still gets pulled through the chassis cooling the internals.

On the top of the HD29Darbee is something you’ll very rarely see or care about after you’ve set it up for the first time. There is a zoom ring right up the front for, you guessed it, optically zooming the image (there is also a focus ring on the front) and lastly is the physical buttons. I actually never used these buttons for the functions of the projector, because everything I wanted to do, I was able to do from the comfort of my couch using the bundled remote, which is great, because I don’t feel like standing on a step ladder to calibrate and fine tune the projector, so the buttons are there, but you’ll likely not need to use them.

One of the big things with projectors replacing TV’s is the notion that you can’t use a projector with the curtains open. Whilst that is still somewhat true, it can also be hard to see a standard telly if you’ve got not it positioned in a room properly or if you don’t close the curtains. But with 3200 Lumens, the HD29Darbee, fairs really well with the curtains in my office open. As you’ll likely know from previous projector reviews, my office has 2 8ft by 3ft windows that might as well be floor to ceiling. These windows are to the left of the room as you walk in, which makes them 90 degrees from where the projection screen is, might as well be a worst case scenario for a projector, but as you can see from the embedded Instagram video, the HD29Darbee handled it like a champ.

Brand new projector from @OptomaUK in, the HD29Darbee. For those that say you can't use a projector with open windows

Now that we’ve gotten that out of the way. Whilst you can use the HD29Darbee with the curtains open during the day, where it comes to life, just like with any projector and a good TV, is when the lights go down and the curtains closed. Whilst 1080p on a 100” screen might sound horrid and pixelated, you’d be wrong. The HD29Darbee, especially with the Darbee image processing magic, makes you forget that you’re only looking at a 1080p image, and you just fall into the content.

It didn’t matter whether I was watching DVD rips from a film from the year 2000, or whether I was watching a Blu-Ray rip from last year, the HD29Darbee gave me an image I was absolutely dumbstruck with, and in the case of the Defenders from Netflix, It was what enabled me to watch the entire series in a day, because I was just in awe at how it looked. 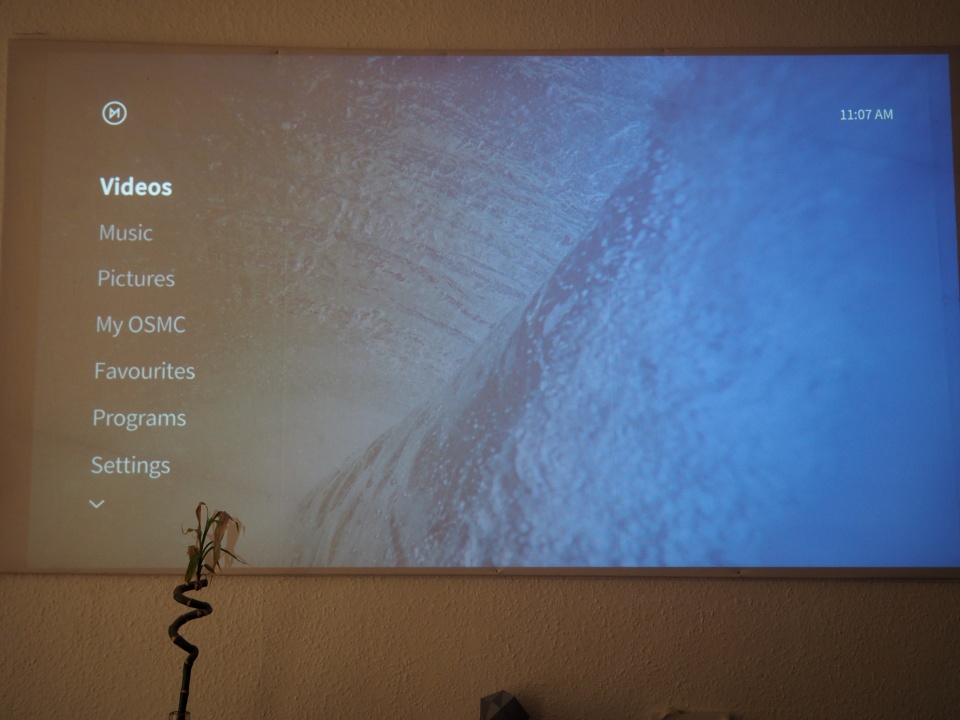 If anything, the HD29Darbee was too good. In some images you may see that the projector is actually at the edge of the shelf, and is overhanging a little. This is not to do with space behind the projector, no, this was due to the fact that my shelf is so high that even with the image shrunk optically using the zoom, and the digital shrink in the software the image was still too high, so the rear legs were raised to their highest and the front of the projector was lowered as much as it could have been just to get it on my projection screen.

Brightness and image uniformity was also pretty damn great with the HD29Darbee. Optoma claim that over 80% is uniform, but it feels much more than that, whilst the image was brighter towards the centre, it wasn’t distractingly so, moreso because I was looking for things to talk about in the review. So if you have to actively study something instead of enjoy it to find “flaws” well, the company is doing a good job there. 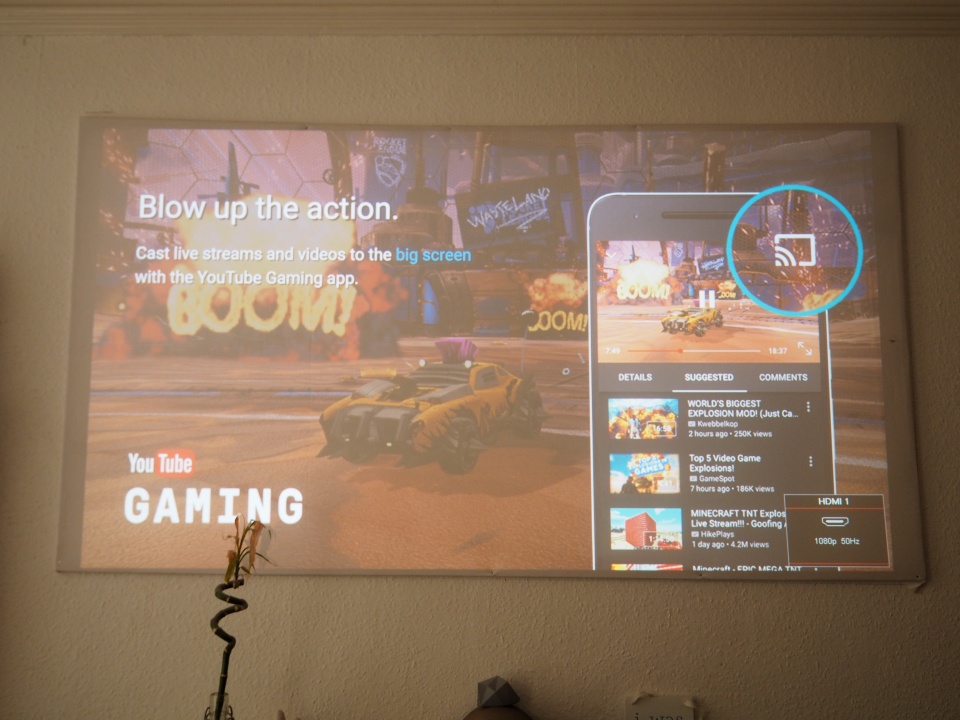 Let’s just get this out of the way, buy a speaker or a soundbar. If you’re spending £750 on a projector, spend the extra £50 or so for a soundbar, you will not regret it. The 10w speaker on the HD29Darbee is meh bordering on crap. It does work, and it does get decently loud, but it is kind of gutless, very little highs, and the bass is non-existent, seriously, just spend the extra cash for a soundbar, your ears will thank you.

So here are the little bits that don’t quite get their own segment, things like the fact the Projector only has 2 HDMI ports, which is okay, but it can quickly get cramped and you’ll probably invest in an HDMI switch for this, just to be on the future proofing side.

Next up is The included remote, it’s not my favourite remote. It feels cheap and flimsy, and the aggressive blue LED backlighting only serves to harshen this effect. If the HD29Darbee shipped with a remote similar to that of most TVs, I think that’d be fine. These uber mushy buttons and hollow plastic don’t feel befitting of a £750 projector.

Lastly, I’ve love to see some of Optoma’s home theatre/TV replacement projectors start to move to LED and Laser projection systems, not just for size and heat reasons, not just for the image quality reasons either, but for the power consumption as well. Whilst in idle mode the HD29Darbee is remarkably efficient, once it’s on and in use, that number is a distant memory. This also would mean longer “lamp” life in the tens of thousands of hours instead of the mere thousands (which is still a lot) of current setups. The ML750st did it, an HD30Darbee would be fun to see with it.

If you’ve actually been paying attention to this review, you already know I’m going to tell you to buy this if you can afford it. Films looked great on it, the small sliver of gaming I did on it (Retro games on Raspberry Pi and a bit of racing on an Xbox One) looked stunning. My only major gripe is the sound system, but you shouldn’t be using the inbuilt speakers in a £100 or a £10,000 TV, let alone the one in a £750 projector.

I might start to get the reputation of an Optoma fanboy, but that’s purely because they make absolutely stunning products and are really nice to work with and have some great support from what I’ve had to go to them for. Whilst £750 for a TV seems a bit much, especially for a 1080p one, it really isn’t, if you can find me a 100” 1080p TV for under £1000 i’d be surprised. It’s by no means cheap, but Projectors are a worthwhile investment. My first projector is over 10 years old, getting up to 13 in fact, and it still works. I’m upgrading it soon, not because it’s dead (though this third lamp is on its way out) but because I’ve outgrown it. But it’s taken awhile to get that far.

If Optoma were to send me a keeper, I think it’d be hard for me to not binge watch so many Netflix series, or, you know, rewatch Avatar the Last Airbender for the 10th time. 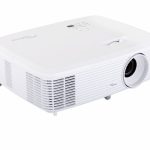