Toothbrushes are something we all take for granted right? I mean what’s the difference between a £1 toothbrush and a £10 toothbrush? They are both designed to do the same thing, clean your teeth, or are they? Oclean, a subsidiary of Xiaomi seems to believe that their Air2 Sonic Electric Toothbrush can do something over and above the status quo.

Oclean provided the Air2 Sonic Electric Toothbrush, free of charge, for the purposes of a full review however they did not view this article before publication.

The second-generation Air sonic electric toothbrush comes in a white box which contains the handle, a brush head, a USB powered magnetic charger and a user manual. The brush head is covered by a plastic cover which could be used when you are travelling to avoid contamination. This is what I expected from a Xiaomi brand as they always provide minimalist packaging and products.

Oclean offers the Air2 in a range of 4 colours; Tulip White, Eucalyptus Leaf, Purple Iris & Pink Rose. Tulip White is the colour I was sent and I would say it’s the safest choice, however I would have picked the Eucalyptus Leaf if I had the option as it’s a fairly unique shade. 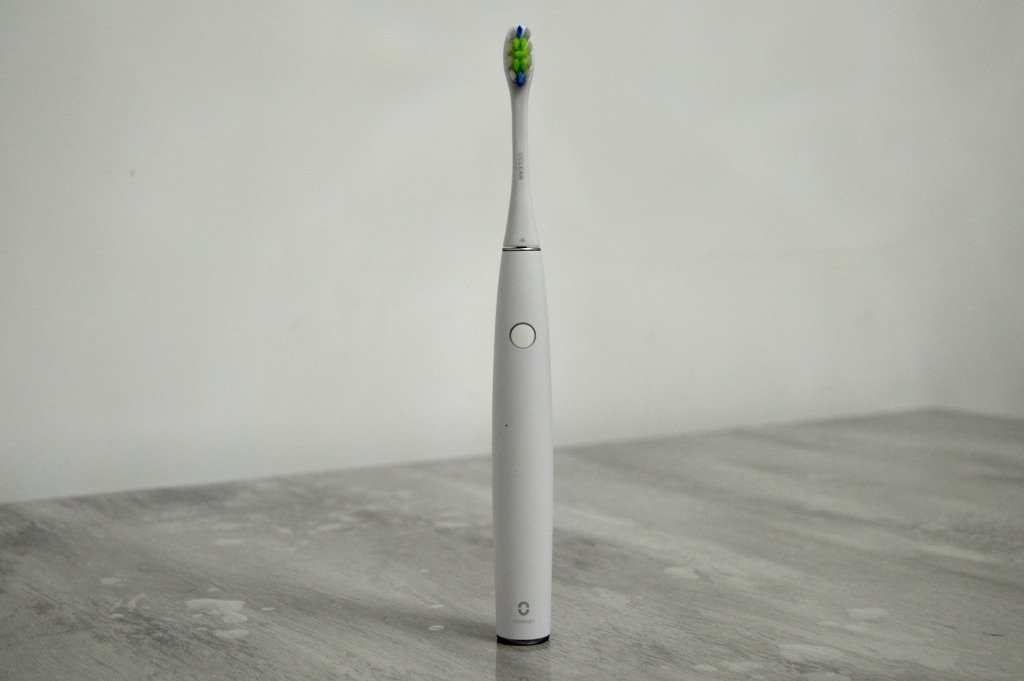 The in-hand feel is pretty nice and the lack of ridges and areas for toothpaste and bacteria to hide in compared to other traditional rubberised toothbrushes is a big benefit. It is almost in the middle of conventional electric toothbrushes and traditional manual brushes in terms of its size. The smooth finish does take a little getting used to and if you have really wet hands you can find the brush slipping a little in your hand so requires a firmer grip. 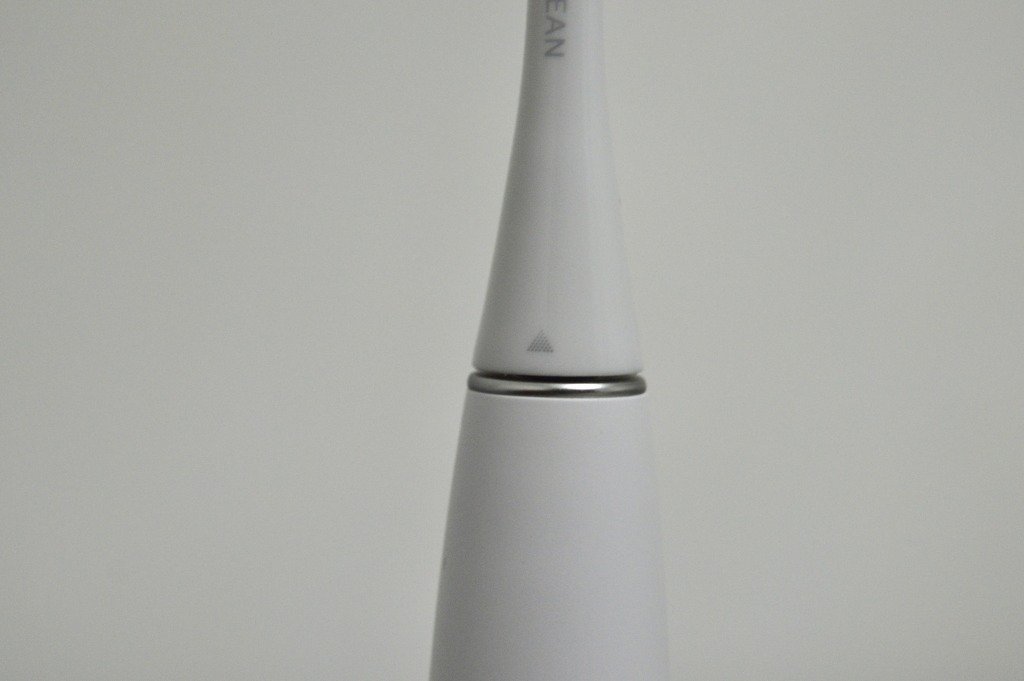 It can be a little fiddly to put the toothbrush head on fully as the first time I did it, I thought there was a manufacturing defect with my unit as I couldn’t get the brush head fully flush. But a little extra pressure is required and you can end up with a nearly flush finish and I compared this to the official imagery from Oclean and this seemed correct.

The primary standout feature for the Air2 is the noise it outputs or lack thereof. The brushless motor allows the electric toothbrush to have an operating volume of around 45Db which is significantly lower than 60Db of traditional toothbrushes. I wouldn’t say I have noticed a big difference to my brushing on a day-to-day basis due to this lower operating volume.

I am used to a circular rotating brush head compared to the straight Du-point diamond-shaped bristles. I did find that it did take a few days to get used to this design, but I preferred the rotating brush head of my normal toothbrush as the forward and back motion combined with the constant rotation provided by the brush head makes my teeth feel cleaner. I don’t know whether that is a mental thing especially as I am so used to that kind of brush as I have used it for many years now, but if you are used to a traditional brush then this will feel right at home just based on its design.

The main difference between a traditional electric toothbrush and this sonic electric toothbrush is the fact that the former rotates at a rate of between 2500 and 7500 strokes per minute which is considerably lower than the 30,000 strokes per minute that the sonic toothbrushes can offer. This higher vibration rate does offer a significantly higher cleaning rate and during my research into the technology, I also found that there is a secondary benefit named Fluid Dynamics, whose name makes it sound much more interesting than it actually is. The process involves the toothbrush agitating all the fluids in your mouth (water, saliva and toothpaste) to turn them into cleaning agents so that they can reach into crevices such as below your teeth and below the gum line to effectively clean your mouth. So technically my theory was incorrect as the higher level of vibrations provided by the Air2 Sonic toothbrush offers a much higher cleaning level than a rotating electric toothbrush. 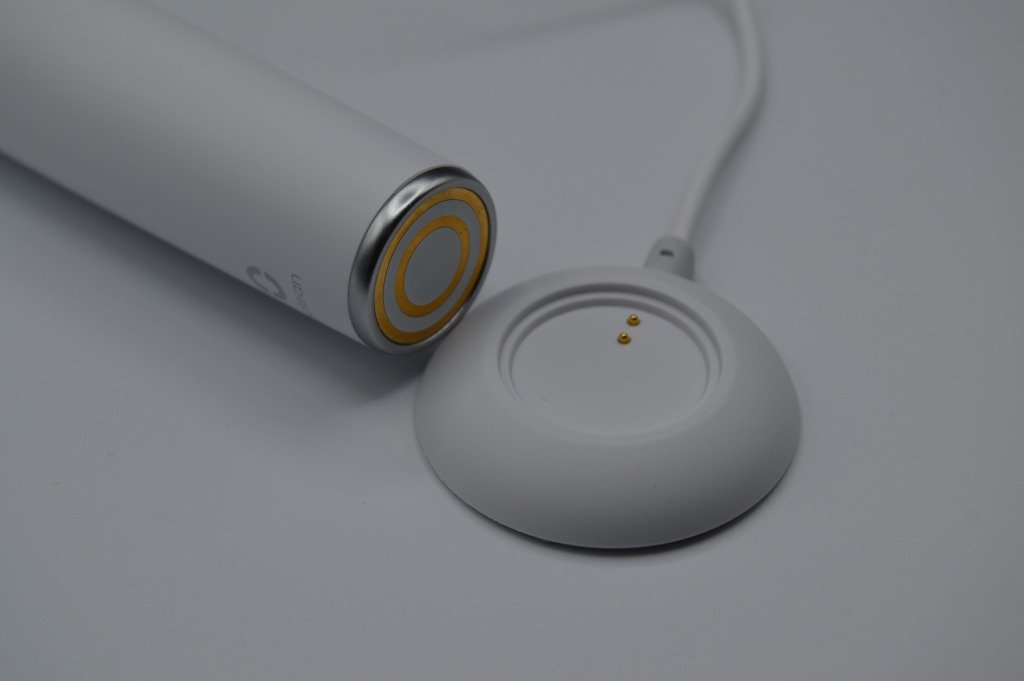 The magnets between the puck and the base of the charger are fairly strong so you will end up lifting the charger when you try and remove the toothbrush from it so you will have to push the puck down whilst lifting the brush up. The lack of any rubberised base on the puck also means that it slides about a fair bit on a surface. The cable measures 30cm which should be okay but a slightly longer cable would have been better. 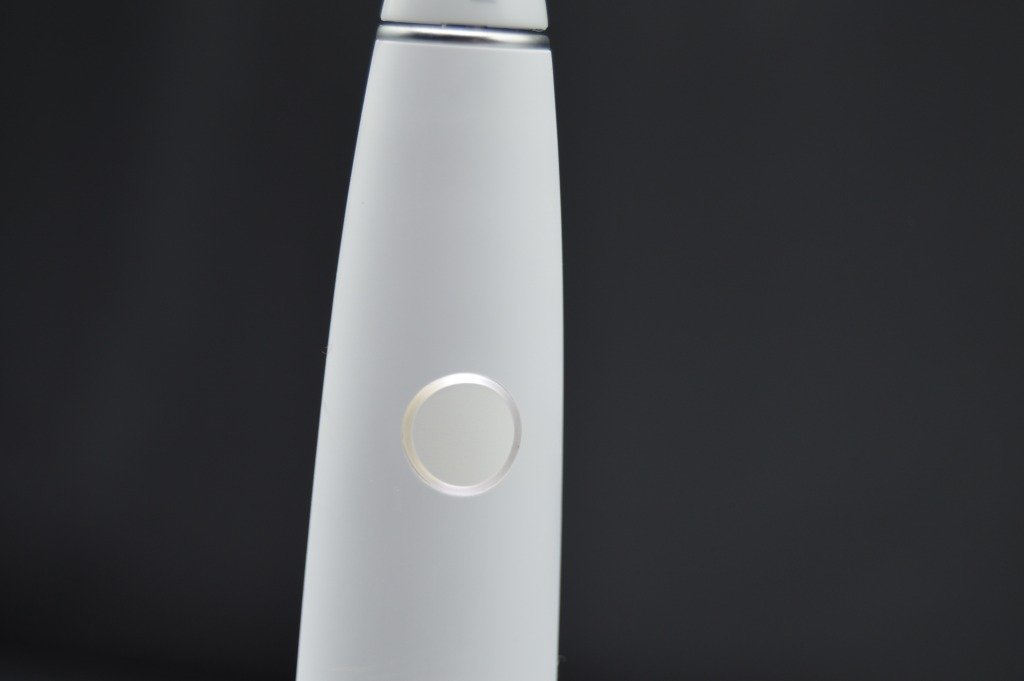 The battery life is rated at 40 days of usage when brushing twice a day for 2 minutes, with a total expected run time of 160 minutes in total which is ever so slightly longer than the 150 minutes it takes to fully charge the Air2 as it only accepts a 0.5A charge input via the puck. The charging time is very rarely going to be an issue as you can place the toothbrush on the charger whenever you see the red LED indicator and by the next time you brush you will have a full charge.

I haven’t used the toothbrush for long enough to deplete the battery but I have mainly been using it in the standard mode with the occasional deep cleaning use for the last 3 weeks with the battery still holding up. But my current electric toothbrush has a 2-week battery lifespan so this is a big difference.

One major concern I had is the availability of replacement brush heads as Oclean wont be stocked in the traditional retailers such as supermarkets and chemists, you will be reliant on online retailers. I was initially unable to find the brush heads for the Air2 apart from the Oclean official store on AliExpress but after doing some digging on the Oclean website, I was able to find out that all Oclean brush heads are cross compatible.

As expected the toothbrush has IPX7 water resistance which means it can be submerged up to 1 metre for 30 minutes so if you are somebody that brushes in the shower the toothbrush should be fine but I would keep an eye on your grip as mentioned earlier due to the smooth finish on the handle.

At just under £20 at the time of writing this review, its priced almost perfectly as a Christmas present with better cleaning capabilities than the top oral hygiene brands price equivalents!