Netgear Wi-Fi Adapter Review: Looks good, but is that enough to win?

Wi-Fi is something essential to today’s society, even those who say you shouldn’t spent a lot of time on the internet use Wi-Fi all the time. What else do we need, well… It needs to be fast, so today we’ll be checking out the Netgear A6210 802.11AC Wi-Fi Adapter. Does it meet the standards of today’s users of the Wi-Fi networks across the world? Let’s find out…

While opening the box I saw a very tiny and fragile device, at least, that’s what I saw… Because after taking it out of the box it felt pretty solid. The adapter is made of two parts, the “real” hardware and the antennae connected to the hardware by a hinge. And the hinge is the only point where it could use some more attention for detail from Netgear. The hinge feels a bit loose at certain point of turning the antennae part up. It’s really hard to describe what’s going on, but at those points it doesn’t want to stay at its place and it just goes down again. If you’re past that point it is perfectly fine, and to be honest it isn’t like you’ll get annoyed by it. You’ll probably get the antennae in place without even noticing. Netgear decided to go with a black matte plastic on the adapter, and I really agree with them using that kind of plastic. No fingerprint or other kinds of dirt can be found on the adapter, even after repeatedly touching it. Good job on the build of this Wi-Fi adapter, Netgear!

It’s a Wi-Fi adapter, and this is probably the point where I could stop if I want to keep it short. As you probably would’ve expected the adapter doesn’t look extremely special or whatsoever… The black plastic gives the adapter a very… functional look. Without joking though, it looks really good when you just use the provided stand and put it on your desk. The air vents used on both sides look great as well, even though the air vents are just made of lots of triangles. I think that for a Wi-Fi adapter is looks great; functional but not just one big slab of plastic, together with the stand you won’t regret putting this on your desk.

This is of course what you’re coming for when looking at a review for a Wi-Fi adapter, does it live up to its specifications… And to be complete honest, it let me down a bit… especially when looking at its price. I have recently reviewed the TP-Link Wi-Fi adapter which could easily connect to the 5Ghz network on the 1st floor. And it could see lots of other 5Ghz networks close to my house as well. But this one is only able to pick up one 5Ghz network located closely to me. As my desktop PC is sitting on the 1st floor I wasn’t able to test its 5Ghz connectivity. Looking at the 2.4Ghz side of things it does show a ton of networks. I was really surprised by the number of networks it showed to me… That basically means this network adapter will basically “suck” for everyone with Wi-Fi network faster than 144Mbps as the 2.4Ghz capabilities of this adapter end there. As the Wi-Fi network in my house doesn’t even come close to the 144Mbps it isn’t an issue for me. Though what I can say is that you won’t be getting any speed records with the adapter.

When testing the adapter, I got somewhere close to 24Mbps for download and 5Mbps for upload, the best test run is shown below with 32Mbps down and about 7Mbps up. That’re just mediocre results for an adapter that should easily be able to get to 40Mbps and well across that. At last I want to discuss the firmware that Netgear provides for the adapter… Well, I’ve done a lot of things, but no matter what I did, I wasn’t able to get the Windows firmware out-of-the-way so the Netgear Genie software could find the device. It’s great that they try to deliver a software suit for the adapter, but if Windows isn’t cooperating it won’t work…

After having used the Wi-Fi adapter for a few weeks I’m not really getting a wow feeling. Yeah, for web browsing and downloading some things it is pretty good… But if you’re really into gaming and you regularly download a lot of stuff. You may want to look elsewhere.

For about £30 the Wi-Fi adapter is yours, and looking at the price to performance ratio it seems a bit steep to me. The design and build quality is pretty good though, and if you’re just a “normal” user of the internet which doesn’t need the network to be exceptionally fast. You may still check it out if you were on the lookout for a Wi-Fi adapter. 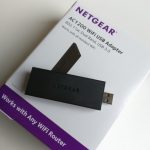