I’ve used Netgear routers for some time and they are like Marmite. Some swear by them and others stay clear. If I had to fall one side of the fence it would be the former as I’ve used Nighthawk devices for the last few years and I’ve previously used Wireless G models. The Netgear Nighthawk X10 (or the R9000 model) attempts to make no compromises with four amplified external antennae, a 1.7Ghz quad-core processor and even support for the latest wireless standard, 802.11ad. Let’s see how it performs in our review.

This is a big old beast and it should be as it’s designed for very large homes. Not only do the four antennas protrude from the ‘mother ship’ quite some way, the base itself is a hefty unit and actually caused me a little issue when attempting to wall mount it (an issue for some connectivity – more on that later). The aesthetic is still agreeable to me, however; a combination of the conventional router with the air vents and backface, coupled with Sci-Fi-esque design cues in the shape of the angled chassis and obelisk-type antennae standing true from it.

On the rear of the device are 6 individual Gigabit ports, and a WAN (Internet) port for Internet connectivity. Port 1 and 2 can be combined to aggregate the link, providing double the speed of a single port, if required. On the far edge of the back face are a 10Gigabit SFP+ port, along with a power on/off button and the power input. This sort of setup is not found on everyday router models and the Netgear Nighthawk X10 does indeed provide some higher quality options for connectivity than some of the competition.

Another example of the high-end features here is the inclusion of 802.11ad which theoretically delivers up to 4.6Gbps throughput. That’s a lot of throughput, with the previous Wireless standard, 802.11ac delivering just 1.3Gbps under optimal circumstances.

The package comes in a lovely gradient toned box, with the router, an EU and UK adapter, as well as an Ethernet cable to get you started with the Internet port, as well as a quick start guide.

This is the first 802.11ad router I have tested to date and on that particular feature, I’m completely none the wiser due to the severe lack of 802.11ad clients. Essentially the 60Ghz band should allow for much quicker throughput between devices, however, those devices will have to be present within metres of the router, and hopefully with no mass between them such as a wall or even a human! The 60Ghz band doesn’t do well with obstacles found in everyday homes, so that’s a little bit of a downer to start on. Thankfully, the Netgear Nighthawk X10 has a few other tricks up its sleeves and it’s still blazing fast in the other bands it operates on. 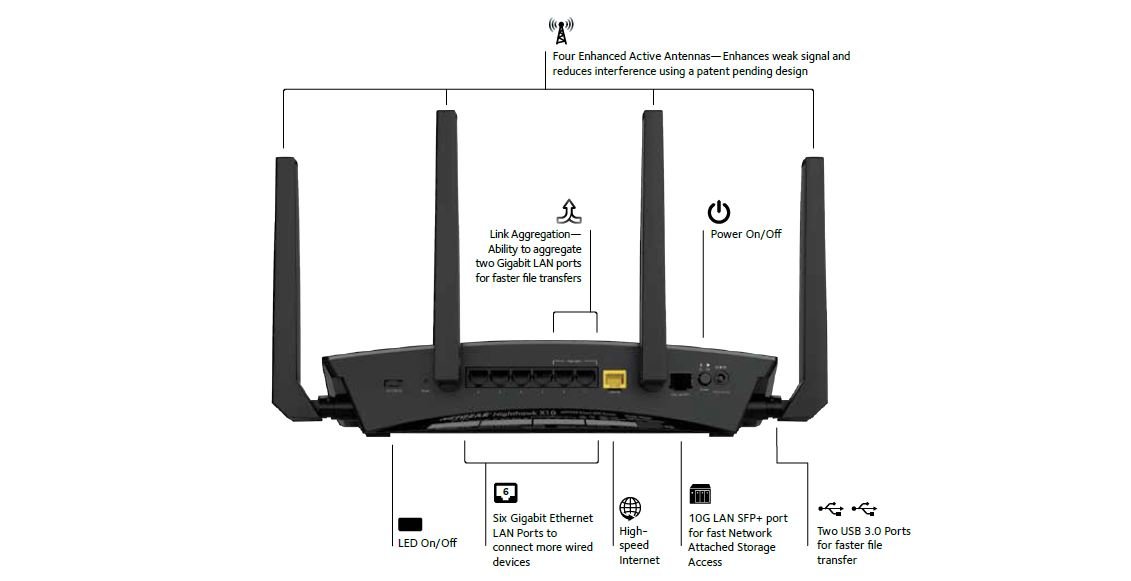 The Netgear Nighthawk X10 is the latest in a long line of Nighthawk routers and they all follow a familiar design and backface also, separated only by speed increases, number of antennae as well as increase LAN ports available. The X10 is no different and the familiarity, for a long-term Netgear router user such as me, is reassuring. A feature I didn’t expect to see on this device prior to pulling open the gorgeous, but incredibly large box, is the link aggregation for those wanting faster throughput than a single Gigabit port can allow. I won’t use this too much, but I did test it out for streaming 4K video to my ethernet-connected TV’s. A nice option to have if you’re keen on high quality video streams across a congested network anyway.

Of course if you’ve never attempted any local streaming before, now is the perfect time as the Netgear Nighthawk X10 comes complete with a built-in Plex Media Server. Simple to setup and convenient for all your DLNA clients out there, the Plex feature allows your media library to be streamed across your home network. Those more advanced users have been delivering this functionality via dedicated media server machines for years now, but the included 1.7Ghz quad-core processor and increase RAM over previous versions certainly brings the streaming option to the mainstream. I say mainstream, but that’s a bit of stretch to be fair. At £330, this is not a cheap router, even for those used to purchasing high-end networking kit for their home. It’s not a small amount of cash to drop is it? 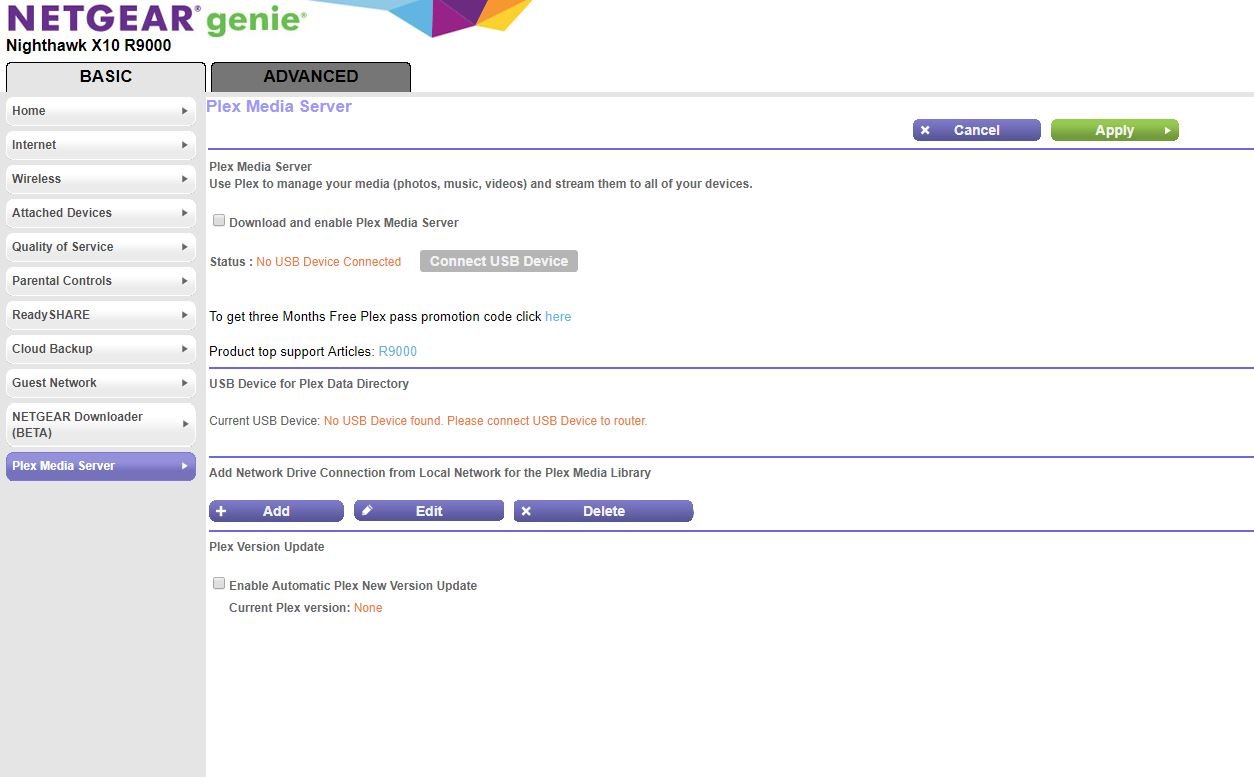 Regardless of the lack of real-world use for the 60Ghz band, the 2.4Ghz and 5Ghz bands perform incredibly well on this router also. In my testing I managed to deliver  just over 100MBps at close range (of around 3-5 metres with no obstructions), and just shy of 17MBps whilst sitting a number of rooms and a floor away in my conservatory. That’s not too shabby at all and destroys the R7000 I was using before in terms of throughput and signal strength. Of course, this is not a mesh network solution like Netgear’s Orbi which can obviously help to bring signal to those hard to reach places and give a consistently performing WiFi network throughout, but in a regular to large house you really might not notice enough to make Orbi or a similar product a necessity.

Thankfully Netgear has focused on improving the USB throughput for connected devices also and our test showed pulling large files from a connected USB hard drive over the LAN managed speeds of over 70MBps too which is great. This is obviously dependant on not only the transfer type, but also the device type you’re connecting but it does give some indication of the power included here. 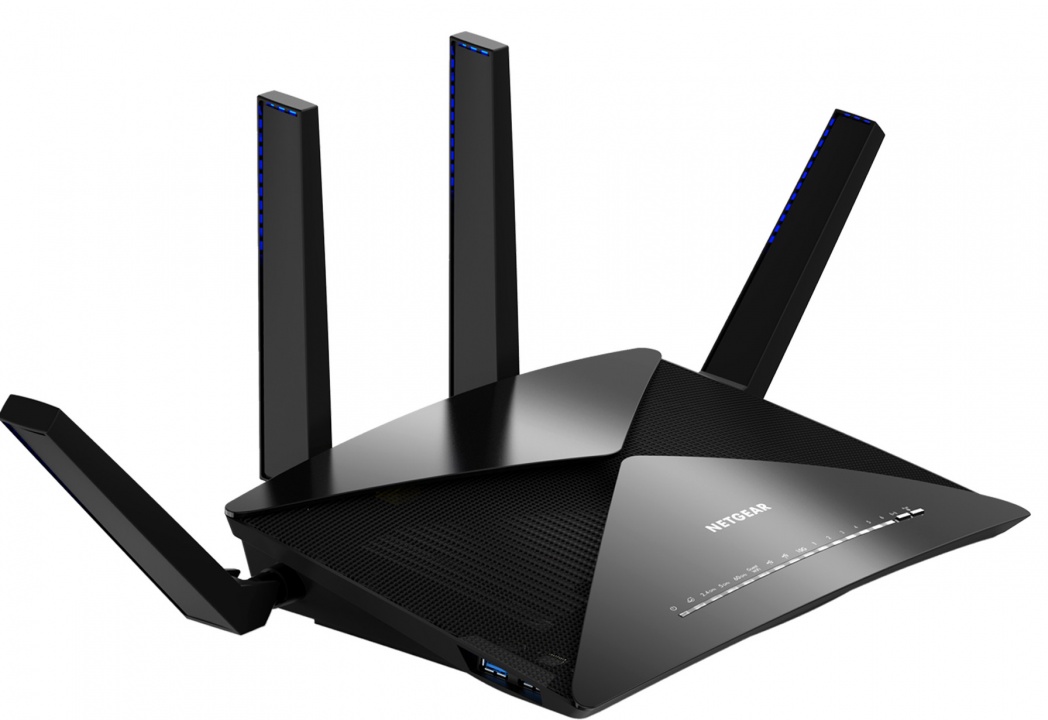 So far there’s nothing really not to like here. Sure it’s a bit bulky, but mount it in a hall or other out-of-the-way location and that should prove no issue. In truth, my gripes don’t sit with the hardware on the Netgear Nighthawk X10, but instead with the infamous Genie software included. I have a love-hate relationship with Netgear’s software for the simple fact that it can perform absolutely fine for months only to then hit a snag. Of course, change logs for firmware updates will tell you fixes are included but in my experience they regularly introduce new instabilities or security vulnerabilities. It’s such a shame as the hardware is first rate for the most part.

In the few weeks I’ve been reviewing the Netgear Nighthawk X10, I have been in touch with their support department to diagnose a 2.4Ghz dropping issue (something that has plagued other Nighthawk products of late) and been pointed to a hotfix firmware. To date, this has resolved the issue but I just don’t have that warm fuzzy feeling when I see a new update in the Netgear firmware update page as I do, for example, when Android updates on my phone. Maybe trust just needs to be rebuilt.

Furthermore, the layout of the Genie software has aged badly and is incoherent in places. Some updates of settings reboot the router without prior warning, whilst others simply close the page and go back to the settings page it was on before, leaving you wondering whether the major feature you just enabled is actually now in use. Netgear does include their ReadySHARE set of tools to allow you to connect to the router from anywhere (external to the home network) and whilst this can be easy for non-tech savvy users, I will still suggest using a dynamic DNS service and following a few YouTube videos to port forward yourself as this will allow you to ensure that a direct connection is made without your data potentially circumnavigating the Netgear cloud servers. The Cloud Backup option is a nice feature for those who want a quick and dirty backup solution though.

So do yourself a favour and ensure you disable the Auto-update firmware feature – it will save you some pain in the long run. Ensure you only update your firmware if you have an issue with your current firmware and/or there is a security vulnerability that is explicitly called out as patched in the update.

The performance of the Netgear Nighthawk X10 is right up there with anything anybody can reasonably expect to deliver within the SOHO setting. Throughput via the included Wireless bands and the LAN ports, including with the aggregated ports, is top-notch. It’s a shame that the 802.11ad cannot be put through its paces as such due to the lack of clients currently, but they will no doubt appear in due course. When they do, the location of your router will become more important than ever due to signal degradation that comes as a bed fellow with this new standard.

Despite the Windows-XP-era Genie software, it does has a lot of features to explore, some are more interesting and indeed more fully fleshed out than others, and could be your new router for years to come. For that privilege however you will be spending a premium for as SOHO router. The launch price of over £400 has thankfully subsided somewhat to just the £330 mark which is still a heavy investment. If you are looking for the best single device performance, then the X10 should be up there on your wish list.