This is small – very small. It’s also rubbery, bright, and very simplistic. Another Bluetooth speaker review incoming but this is a little more interesting than at first you might think. Read on for our full review of the NaturalRays Outdoor Bluetooth Speaker. Elephant in the room time. Yes, we know what it says on the packaging; NatulalRays not NaturalRays. However the Amazon listing uses Natural as does the user guide, so we’re going with that. We see lots of Bluetooth speakers here at MTT and we’re reviewed a whole heap of them. This might just be the smallest in terms of form factor we’ve seen yet. Let’s first take a look at what comes in the box.

The NaturalRays unit is rubbery plastic all over and is available in bright blue, or the rather “Slimer-esque” green we’ve got. The sound is produced courtesy of a 1.5″ 3W speaker situated at the base of the product and connectivity is provided with Bluetooth 3.0, AUX in, or even microSD card. The unit will automatically switch from one to the other depending on the order they are connected. A double tap of the on/off button completes the switch.

The On/Off button doubles as a play/pause button and is flanked by volume up/next song and down/previous song buttons. Around back there’s a flap to cover the charging port, AUX port and the microSD card slot. On the top of the cylindrical speaker is a rubbery loop which can be twisted and knotted into various positions; ideal for this use case of this unit

We’ve got IPX5 rating here for water resistance which isn’t waterproof despite what the packaging might allude to. IPX5 rating suggests the unit is protected against low pressure water streams/splashes. Don’t go putting this in a swimming pool and expect it to continue working for long, but it will sit quite happily at the side and get splashed. Bear that in mind.

Sound quality isn’t as bad as you’d expect. It’s actually quite good for such a small unit and small driver. 3W output doesn’t sound too good, and it’s not, technically, but we can almost guarantee that an eyebrow will be raised when playing music from the device for the first time, whether that’s by Bluetooth, AUX or microSD card – it’s got all three options! Likewise though, we wouldn’t expect that eyebrow to stay raised for too long. As surprising as the sound is from this unit, it’s still not brilliant. After all physics dictates that there’d be a limit to how much of a surprise this could spring with the dimensions at work here, but it does do an “okay” job of getting a small table of friends “lit” (as the kids say). It’s got a little bass to it but not a light, but it is quite clear. Clear enough that we’d actually prefer to use this to some of the headphones we’ve tried that have cost twice this much.

Battery life is a mixed bag. We managed 7 hours of continuous playback from a smartphone which sat only a foot away, however on a subsequent attempt after a full recharge, we only managed 6 hours, streaming in the same location, with the same smartphone and application. Strange. Either way, 6 hours, or 7 if you’re lucky, isn’t too shabby from the embedded 400mAh battery.

All About That Base

Perhaps some might think the biggest issue with this device is the fact that it’s speaker is at the base of the device. We’d concur if that was the primary function of this device; to sit on a desk and stream music. However it’s not. This is meant to be paired with an active, outdoorsy type, who is going to make the most of the unit when on a walk, hike, bike ride, run – you get the picture. sit it on its base and the audio output is muddied and pointless. Tie it to a nearby tree whilst you’re having a picnic and things change. Coming in at £21.99 we were very sceptical of the price. The unit is tiny and with 3W power output, how can it be worth the same as, for instance, the Mixcder Drip headphones (we’re reviewing them currently, stay tuned)? We were both right and wrong here. It is pricey and we can’t, in good conscious, suggest that you’re getting value for money here. However, if you have the right use case then this might actually do the job perfectly.

What is the right use case? Well, as their Amazon product page suggests from its pictures, attaching it to a backpack whilst you’re out and about, putting it on your push bike, or even hanging it near your shower will all deliver an acceptable job.

With the surprising-for-the-size audio, but safe in the knowledge there is an audio ceiling which is quickly hit with this device, and introducing the price into the mix, we’re torn. If the price was £5 cheaper we’d wholeheartedly recommend it, if you had the right use case. As it is, we still don’t think consumers would be disappointed with their purchase, we just think that the value proposition might be lacking somewhat.

The long and short here is we were surprised with audio from such a small unit, but that wasn’t enough for it to truly offer value for money unless you have a specific use case. There are much better Bluetooth speakers out there, for around the same price, with a better audio output. None of them are anywhere close to this footprint though. 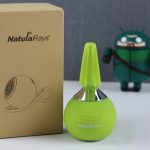