Musaic, the British based audio and tech company, take on the big boys. That was how we saw it back in 2015 when we first heard of this group of passionate tech enthusiasts. This is the first time we’ve actually had hands on with the Musaic MP10 but it’s been greatly anticipated. Can it give the big players a run for their money, and what does it actually bring to your smart home? Let’s take a look. See, good things do come from Kickstarter! It almost didn’t get over it’s funding goal though, scraping over with £64k of the £60k goal. Thankfully they managed it and they’ve gone from strength to strength since 2014. They are looking to play in the same sort of market as Sonos, but their feature set is not only comparative but also disruptive to that same market due to some cunning tricks up their sleeves.

Since that successful funding, they’ve released the big daddy, the Musaic MP10, the MP5 for smaller rooms, and the Musaic MPL, which delivers the same functionality found in the larger units, but for existing sound systems, via AUX or S/PDIF connectivity.

The Musaic MP10 Smart Speaker (to give it it’s full name) is a compact but powerful unit, fitting two 15W mid-range speakers with a 30W Sub in the middle into a 14.6 cm x 41.2 cm x 11.5 cm footprint. It’s got some heft, 3.65kg to be exact, which helps keep the unit static during audio playback with rumbling bass.

That’s quite a lot of features and we’ll give you a heads up on some of the more interesting ones later on. Let’s take a look at the actual unit though as this will be sitting pride of place in a large living area after all.

Essentially it’s a rather understated aesthetic which should fit in most people’s homes, unless they’ve gone for something “Gold Leaf Lavish”-esque. The front has the soft material mess covering the speakers which can be removed for a more industrial look if required.

On the top of the slightly trapazoid/cuboid shaped unit are the touch controls. From right to left we have a Power button, volume up, volume down, mute and Home Control buttons. The Home Control button is used to switch to home automation accessories such as the Phillips Hue (for example) and the buttons themselves can then be used to control lighting moods, etc. This is the first sign that this is a little more than a Wireless speaker.

Moving on we have the Bluetooth/AUX button used to toggle the input modes, as well as the Preset 4/Like, Preset 3/Play/Pause, Preset 2/Skip, Preset 1/Rewind buttons. The preset buttons recall the stored Internet station presets, whilst the Like button allows the “liking” feature found in some streaming services. Likewise, the buttons double as player controls for wireless/streaming playback. That’s a lot of controls but they are intuitive enough to be easily understood regardless of the playback mode. Flipping around to the back we’ve got some more fun and games with the connectivity and port options. We have a power input, 3.5mm AUX in port, WPS button for easily connecting to Wireless networks, a reset switch (guess what that does!), a USB port for charging a device, and an Ethernet port for LAN connectivity. A quick note on the power brick. It’s just that, a brick, but the adjoining cable is sufficiently long to allow you to hide it behind a unit or something similar. Sadly there are no cable management routes on the bottom of the device.

There is much to go through here, but we’ll be brief. The long and short here is that if you’re after purely a Wireless speaker, the Sonos Play:5 might be a better bet. It has better sound courtesy of the many more speakers. To our ear the Sonos does sound better in a larger room than the Musaic MP10. However if you’re interested in more than just the audio, then read on as it’s a more than compelling offering.

Let’s start with that audio.

Okay, that doesn’t do it justice thanks to the audio being passed through both the OnePlus 3 and Instagram. Let’s break it done further. The highs and mids on this unit are crystal clear, regardless of the size of room we put it in. From a small bedroom (which was rocking!) to a larger 27′ by 15′ room, the tones are clear and in the foreground. They are backed up by a rumbling bass that does just as well with Hip-Hop and Dubstep as it does with Rock and Pop songs. It does a decent job of filling the room, but it’s not quite as prevalent in a larger room as the mids/highs are. It loses a little definition in those circumstances, but the fact that the unit itself gets VERY loud can negate that somewhat.

We tested with all sorts of music, including Trap, Hip-Hop, Electronic, Pop (Top 40), Rock, Alternative and also we tried some Audiobooks too which worked surprisingly well relaxing in the evening! The Musaic MP10 didn’t falter at any stage delivering good quality audio throughout.

Regardless of your musical tastes, there is a veritable smorgasbord of connectivity and playback options available. Our preferred playback method was connecting to our Media server, but a close second was playback via Internet radio. Some of us here at MobileTechTalk are quite fond of the odd Hip-Hop banger, and quickly searching for Hot 108 Jamz made for a lovely little session. Simply hit the preset button whilst this is playing back to save it as a preset for easy access next time too!

This functionality is delivered courtesy of the Musaic app available for both Android and iOS devices. Connecting to the Musaic MP10 was a breeze with step-by-step instructions in the app itself leading us through connecting the unit to the home Wireless network, and then on to general use of the application. The application has too many functions to list here, but it allows the control of not only the Musaic device, but also external home automation accessories to create a “scene” when playing music back. Perhaps you’ll want a purple hue from your smart Bulbs when playing “Prince” songs – done!

The app could be a little more robust in terms of the controls. For example sometimes pressing the play button doesn’t immediately start playing a song on the Musaic unit as it depends where it’s attempting to play from. There might be a connection time getting to the media server or indeed the Internet Radio station, however there is no indication of any connection being made – just wait. This aspect could be improved with ease. Additionally, we noticed that when playing back Internet Radio stations, turning off the screen on our Android device caused the playback to falter after a short period of time. We put this down to the Android (Nougat) device however thanks to Doze, as we didn’t see this with iOS.

Aside from that, accessing Media Server (DLNA), on device, Internet Radio or other Streaming service playback via the application is simplistic enough. It could just be a little more aesthetically pleasing and intuitive with the feedback users get.

One of the more amazing features of this unit that elevates it, in our mind, above similar devices in the market is the true “IoT” nature of the device. It’s accessible by the internet, so why not use the power of the internet to deliver more functionality? This is just what Musaic have done, not only by delivering streaming service tie ins with the likes of Spotify, but also by utilising one of the most used integration services around, IFTTT. If you haven’t used IFTTT before it integrates with APIs and web connectors in other services to bring them together to provide powerful ‘recipes’ that create workflows. For example, at MobileTechTalk we use it to distribute any Instagram picture to our social feeds. Musaic have a number of recipes already, with one we particularly liked, and tested, being the ability to turn on the unit when returning home, utilising the smart device GPS location. Great stuff! More recently, Musaic devices can be controlled by Alexa by Amazon also. We can only see them utilising more and more smart home services which will add further value to your device in the future.

So, couple that audio with the ‘every-man’ aesthetic and the sheer versatility of this unit and you’re bound to have a winner right? In short, yes! We loved it. Gone is the “startup hiss” from Bluetooth speakers. No more will you have to add additional devices to your audio setup to access your local network resources. The Musaic MP10 isn’t just a wireless speaker. If you’re moving from a conventional Hifi to something like this you’re going to get a shock (in a good way). We likened it to moving from a bog standard TV, to a Smart TV. There is all of a sudden a huge variety of services to connect to and it opens up another level of playback.

We struggled to find any bad points about this unit, but there are a few areas that might sway certain consumers. The aesthetic isn’t anything to write home about. It’s sleek but non-descript at the same time. We often see the likes of these units being built as such to ensure that they appeal to the majority of consumers. We’re sure this will but we’d like to be able to switch out the speaker mesh for another colour for example, or maybe customise our accents instead of silver a-la Moto Maker style.

Additionally, the price isn’t going to be to everyone’s liking either. The Musaic Mp10 sells at the likes of Amazon UK for £369.95. Okay, that’s not small change and it’s going to be outside of budgets for some (many?) and whilst we’d normally bash units like this for the price (such as the Ruark R3 Mk3), we honestly believe that this is a solid investment. You’re purchasing more than just an audio playback device here. It’s more of a lifestyle unit to be added to your existing Smart Home collection (or to start it off). We’ve mentioned that point a few times, which just goes to show the impact it had on us.

Audio wise there are better devices out there. We mentioned the Sonos Play:5, however that would run you £429, and doesn’t have the same versatility. Make your choice, but we’d be confident in recommending the Musaic MP10 device to anybody wanting Audio, as well as those wanting to open up their present and future to more internet services. A great choice! 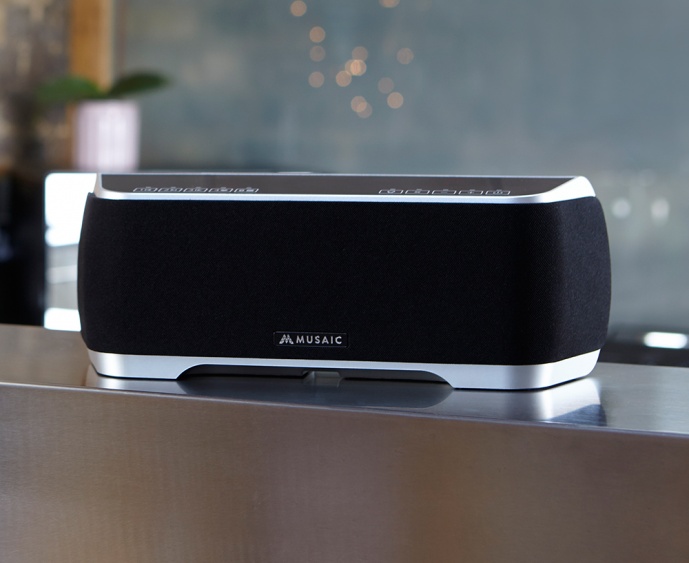