I’m known for trying some weird stuff out over here at MobileTechTalk, I write reviews of Phones on the phone itself, I’ve used a projector as a monitor to write my review of the projector etc, so when I saw AOC had a portable monitor powered by USB-C, I had to ask for it, because I wanted to try something different, I wanted to cover the Huawei Mate 20 Pro launch, from my P20 Pro, plugged into the display and use a Bluetooth keyboard and mouse, how did it go? Well, read on to find out.

Disclaimer: AOC provided this monitor for the purposes of review, I’ve had it in my possession for about a month at the time of this review. AOC have not compensated me or MobileTechTalk for this review and they have no control over the content before it goes live. 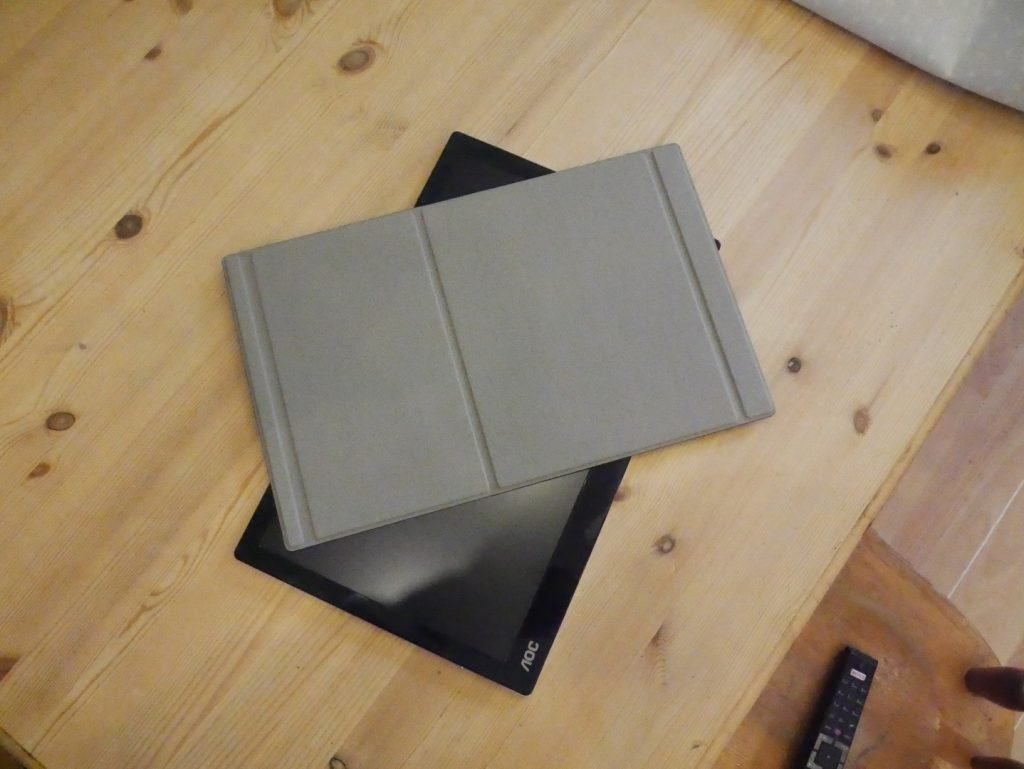 If you really want to know more about this display, head on over to the AOC product page for the i1601FWUX here

Starting off, I’m going to start by giving this monitor a name, as I cannot type i1601FWUX every time I want to refer to the monitor, so henceforth, the i1601FWUX shall now be named Greg. 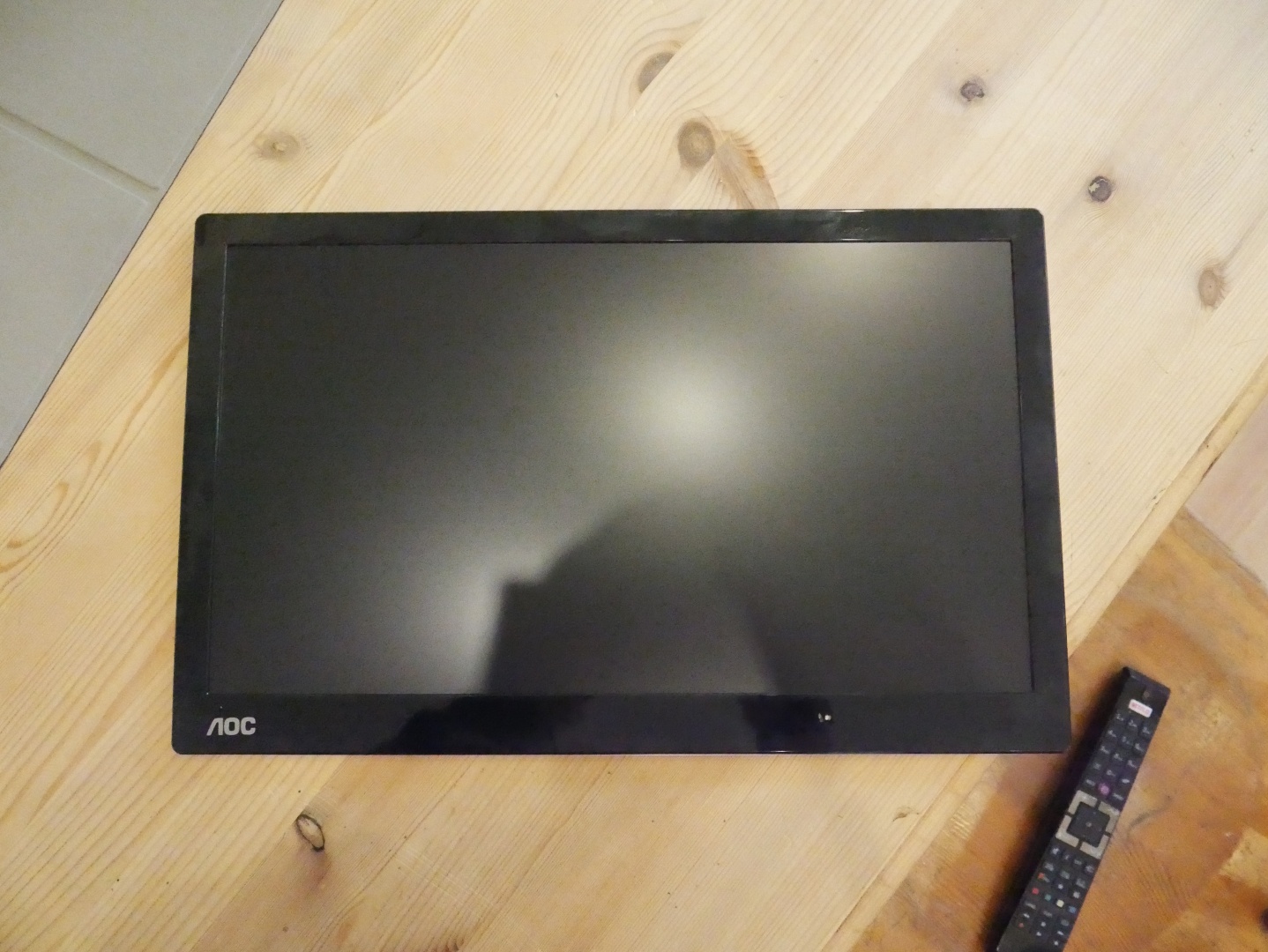 Greg is a pretty simple monitor, up front is the screen itself, duh. The 15.6” IPS screen is actually really nice. 220 Nits is a bit dim in my opinion, but it is completely serviceable for use. The bezels though, those are a tad large. 14mm bezels on the sides and top and 25mm on the bottom, these look very mid 2000’s not nearly 2020. In the bottom left of Greg’s face is the AOC logo, it’s pained silver on the glossy plastic frame but the writing itself is matte for what that is worth. I really am not a fan of Glossy black plastic in consumer electronics, and especially on things that are meant to be mobile, such as a monitor like Greg, because they pick up dirt and lint from everywhere, scratching it to high heaven and back. 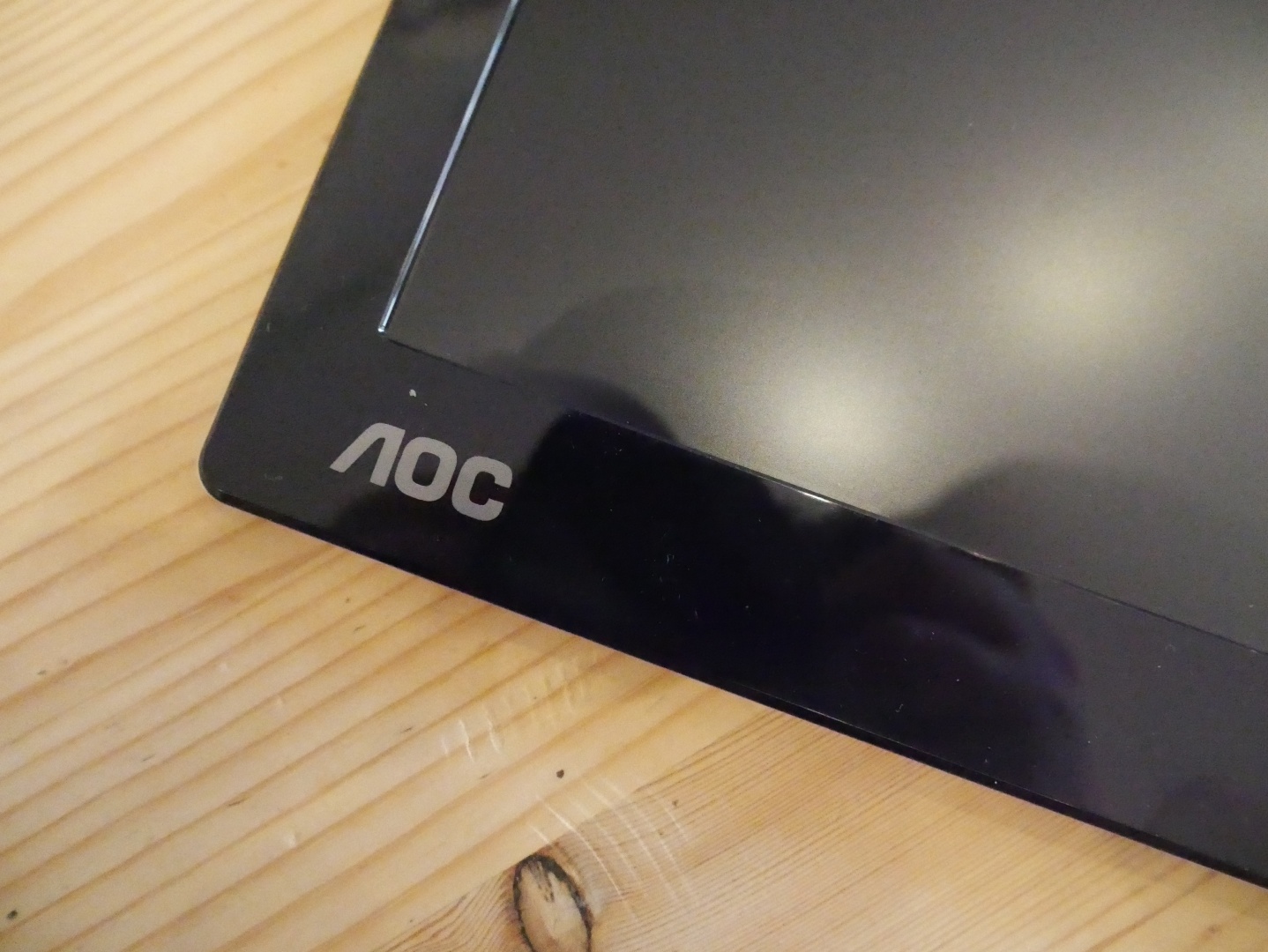 The chassis of Greg is a nice metal shell, making it feel a lot more premium when picking it up. On the rear is an AOC logo that I believe is etched into the metal, doesn’t appear to wear and feels nice to touch, however infrequently you’ll be touching it, and in the bottom left corner is a regulatory sticker showing everything they need to show that you likely don’t care about. Looking at the sides there is… not a lot. From the front, the only things on the sides are the USB-C input/output port and the power button, that’s it. I wish there was more here, a second USB-C port at the very least either for peripherals, external power or just choice as to which side to plug it in. 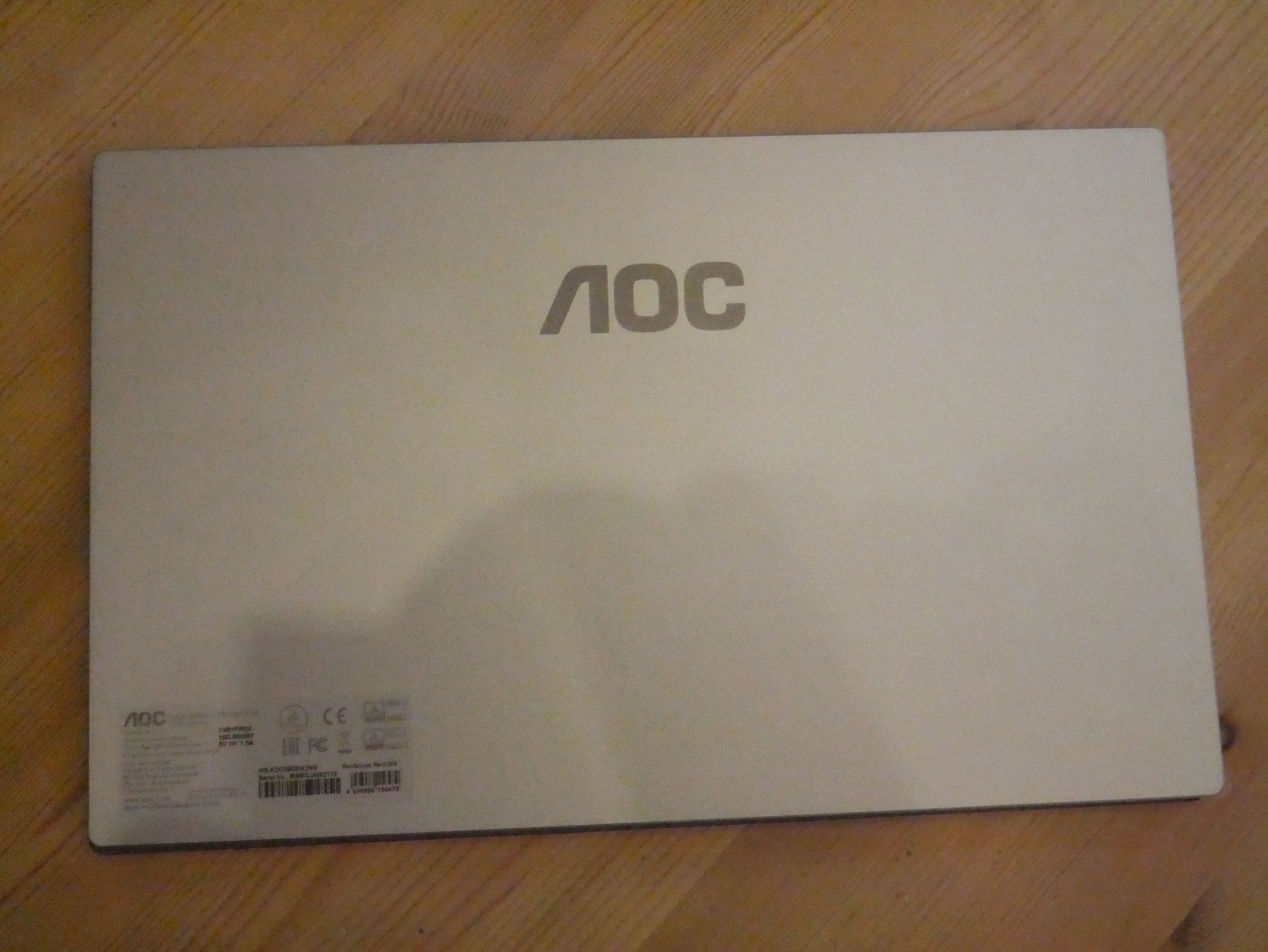 The Last thing I want to talk about is the case/cover for Greg, as I‘m really not a fan. The cover is an origami-style case with magnets all on the short edges to match up with the various magnets embedded throughout Greg. The problem is that this only covers the front when in case mode, leaving the metal uncovered. The Magnets don’t always align properly when putting it on to cover it up, but mainly, the case becomes the stand for Greg and it sucks. Seriously, you have to remember which end is the screen lip end and which end is the back support end, as in my experience it doesn’t really work the opposite way (you know, magnets have polarity and all that). I would have much rather AOC integrated a kickstand in the back of Greg, much like Microsoft and others have done in their 2-in-1 devices, these Origami styles cases are a real pain. 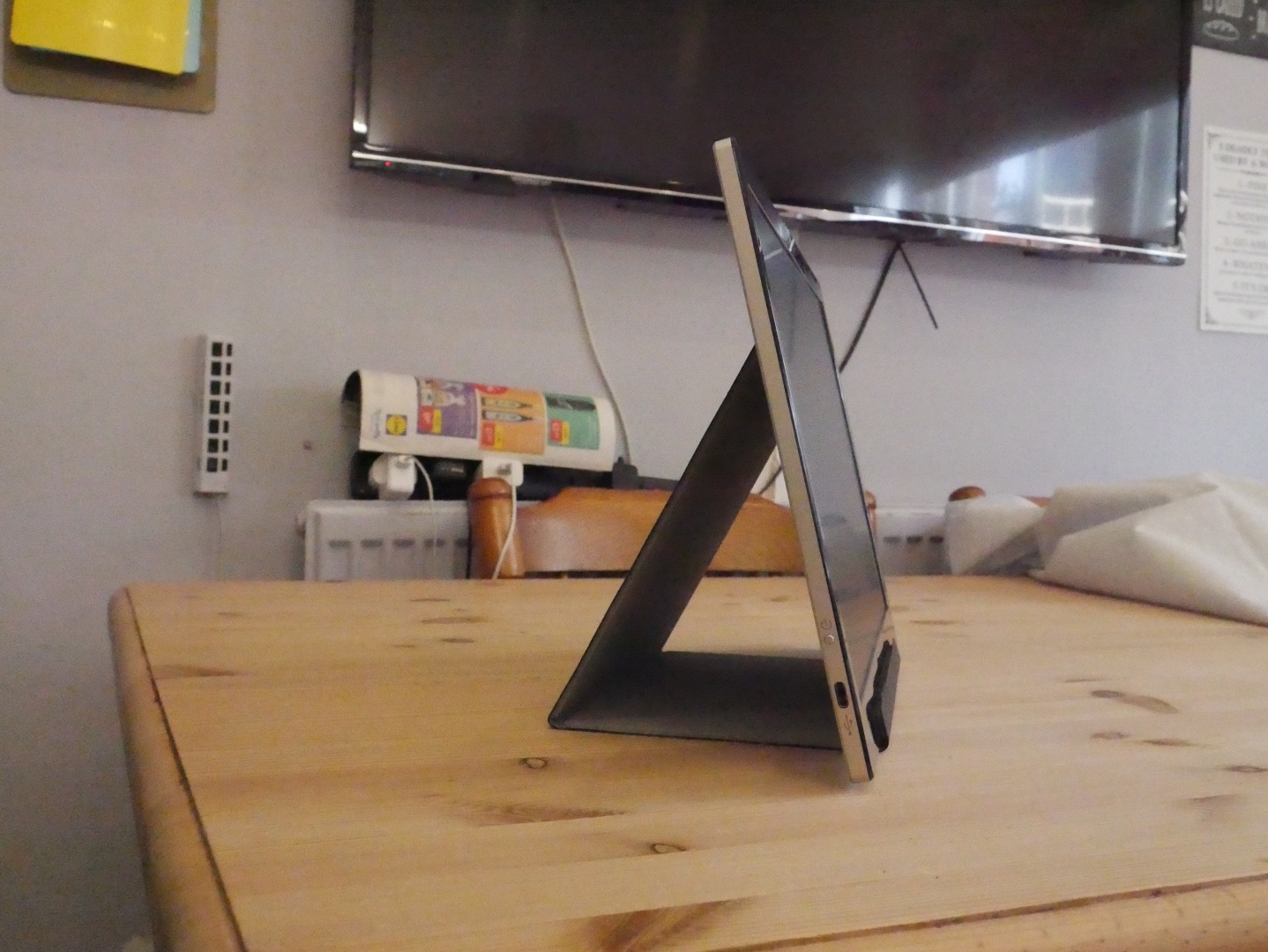 So, how was actually using Greg? Actually, pretty good for the most part. When using Greg on my Galaxy Book from Samsung, the Windows 10 convertible picked up what Greg was straight away and just set it up as a secondary workspace for me. Of course next to the  Super AMOLED 3:2 display of the Galaxy Book, the 16:9 IPS LCD of Greg doesn’t look quite as nice, but honestly, I was shocked at how much more productive I felt just by adding a second display, even to this portable setup. Now, you can get a bit pedantic and ask just how portable is the setup, and that’s valid, but both the Galaxy book and Greg fit in my backpack with the USB-C cable and the Galaxy Book charger with room to spare. What wasn’t so good though, was the space it takes up. 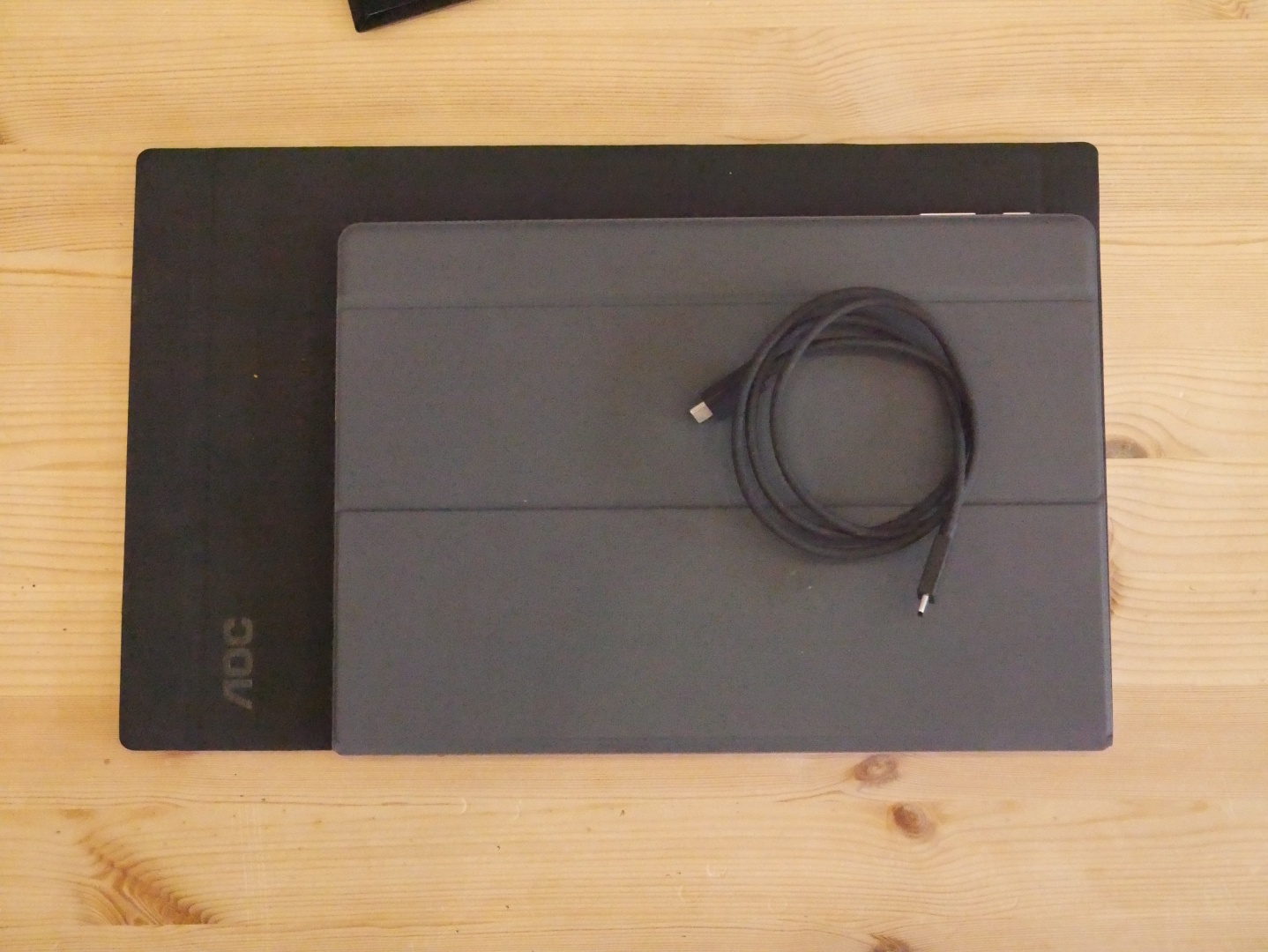 Of course, a laptop with a second screen isn’t ever going to be small, but it almost looks comical here. In the places where I want to use this setup, mostly at press events or trade shows and hotels etc, this is fine, I’ve usually got a big enough space to do my stuff, but I wouldn’t be able to use this setup in my local Cafe Nero for instance, the tables are just too tiny. 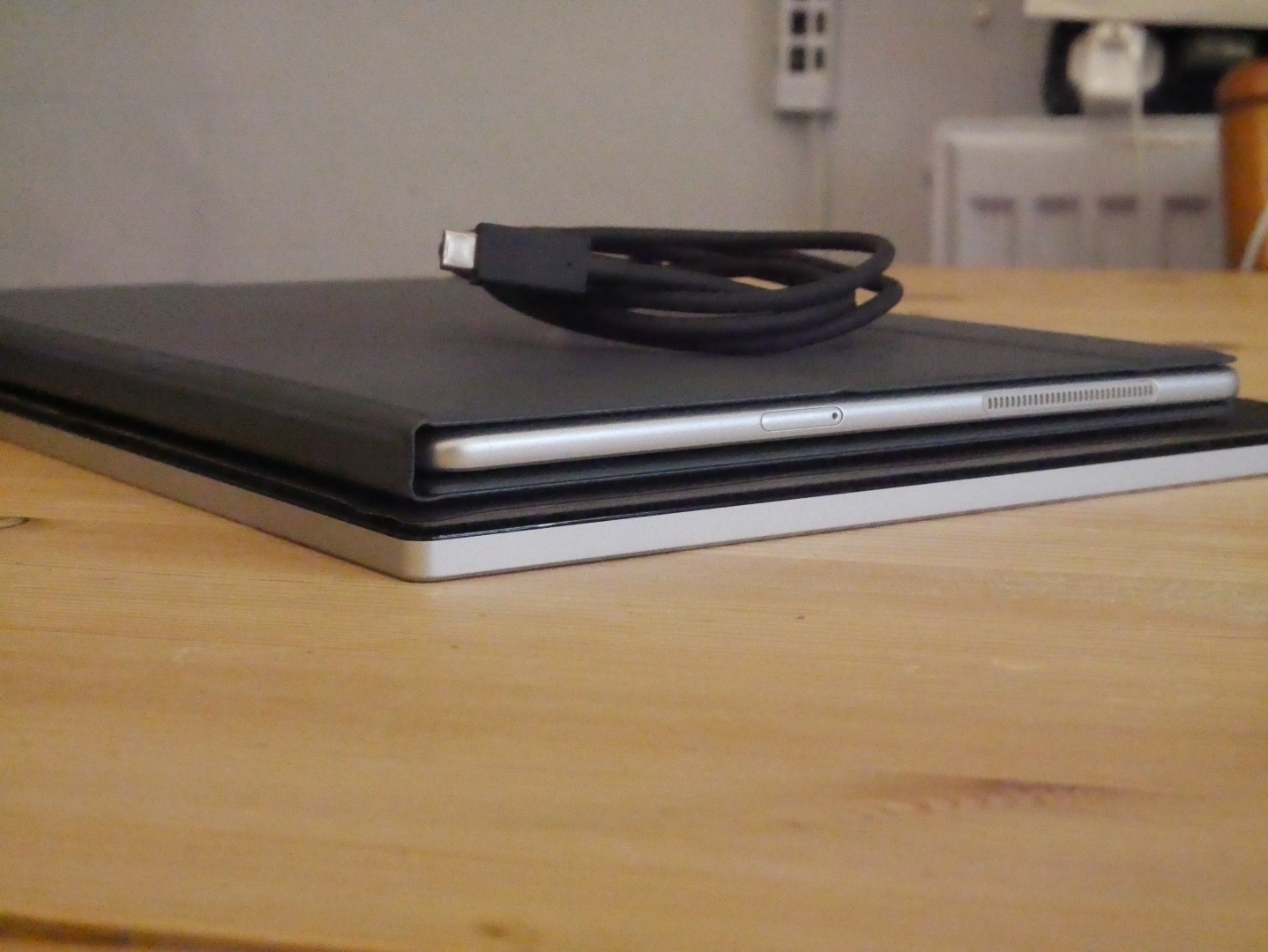 So back to that Intro, was Greg able to help me cover the Mate 20 Pro launch earlier this month? Mostly, yes, Let me explain. Logitech wasn’t able to send me a Bluetooth keyboard in time, so I wasn’t able to fully use the P20 Pro and Greg during the keynote, but afterwards in the experience zone there was a load of benches where I was able to sit down, set up and use my P20 Pro with Greg to edit photos I took on my P20 Pro during the keynote. I was able to message my team in Slack and run the social channels for MTT with Craig, all made easier because of Desktop mode in EMUI. I could have windowed versions of Slack and Twitter, with the WordPress and Trello apps fullscreen when I needed to. Would this have been easier with a keyboard and mouse? Sure, but It sure as hell wasn’t unusable in this configuration, and that is awesome that I was able to take the phone in my pocket, take photos during the event, plug a single cable into Greg, power Greg, send video and data, edit those photos and upload them to social media, that was a pretty sweet time. 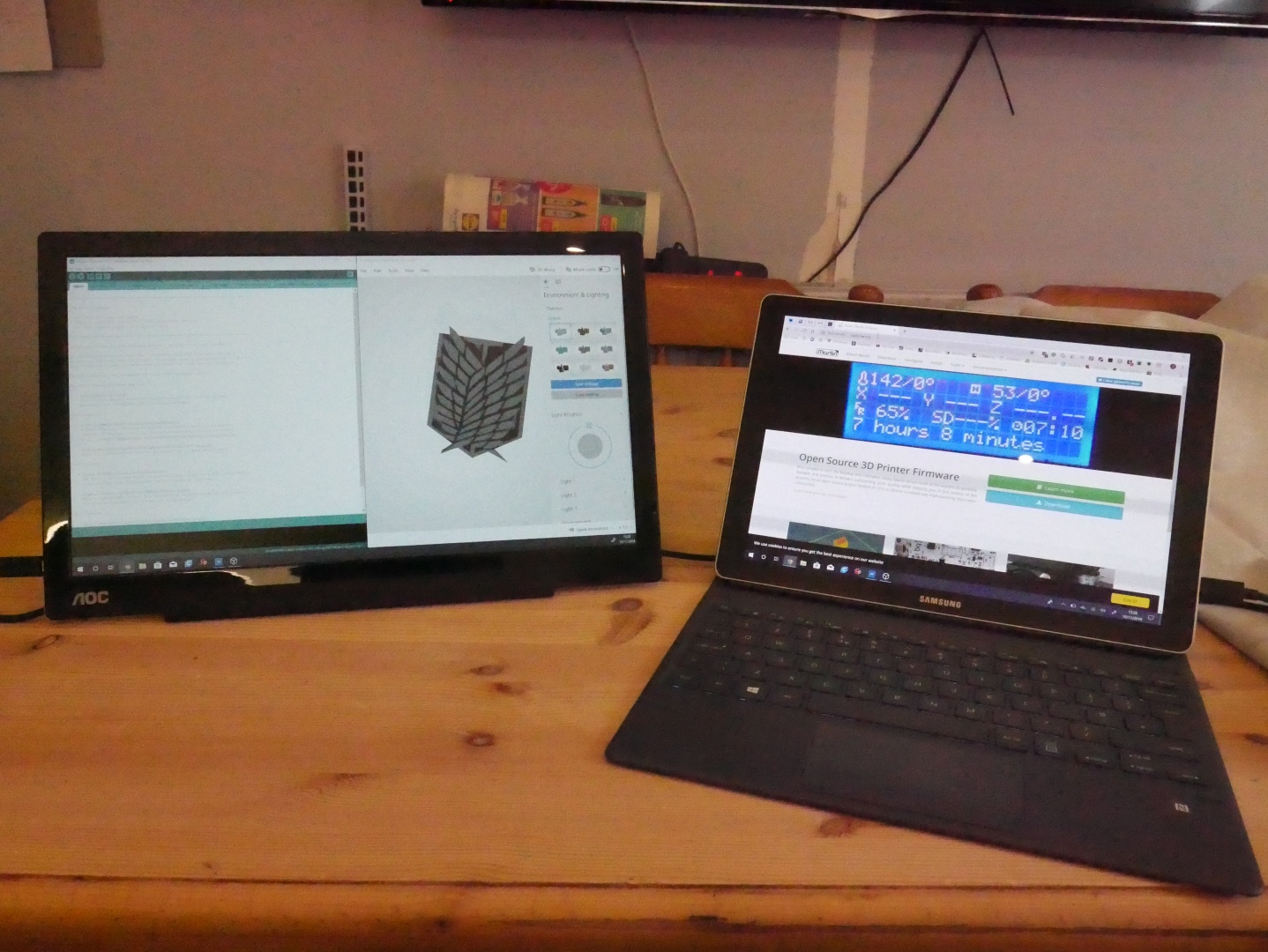 My Issue with Greg though is also one of the best features, the USB-C port, mainly the fact there is only one. I get that the point of Greg is simplicity, a single cable from your source to the monitor and it just works. Well, what if your source device only has a single USB-C port? Such as a Phone? Or the 12” Macbook? Or any of the other devices that only have a single USB-C port? You aren’t likely to find any USB-C to USB-C hubs that all have fully featured ports, ones that allow Data, power, video etc. The easier option? Just put a second USB-C port on the other side of Greg, just one more would alleviate a lot of issues. You can use one plug to plug into your sources, such as a phone or your Macbook, and the second could provide supplemental power to augment the power being used by the monitor or to charge your source device. Or it could be used to plug in a USB hub to plug peripherals in. that single extra port adds a  lot more usability than it seems.

So, Would I recommend people buy a Greg? Honestly, if your Workflow is compatible with it, and your expectations are in line, I’d say go for it. I know I won’t be using Greg every day, maybe even not every week, but the times I will use it, It’ll save me a lot of time and stress. 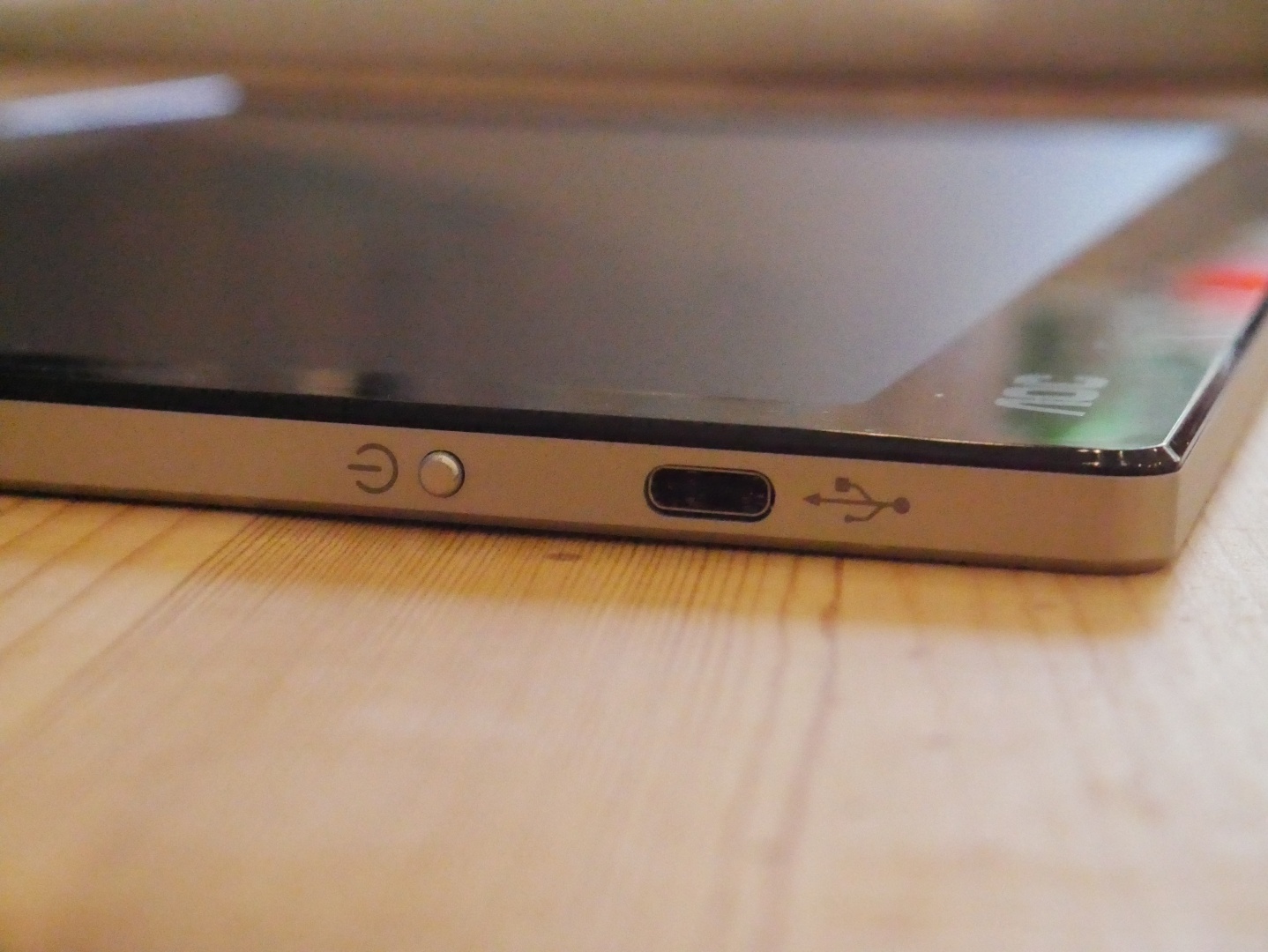 Greg isn’t a perfect product, as I said I hate the cover/case/stand thing with a passion, and I really wish it had a second full-featured USB-C port, but those are things that can be overlooked for a pure productivity standpoint and are things for AOC to improve on with the second generation of Greg, and after using Gen 1, I’m very intrigued to see how they change for next year.