Mixcder might not be a well-known brand to many, and prior to us reviewing their Drip product, we probably wouldn’t have heard of them either. Mixcder deliver audio electronics; that’s their bread and butter, and at a wallet-friendly price point too. It’s the turn of their active noise cancelling ANC-G5 headphones, and we review them below.

Disclaimer: Mixcder sent us a review sample of these headphones free of charge for us to feature within this review.

Let’s cover off the basics then. These headphones could be considered a little bit of a throwback in some areas. The Mixcder ANC-G5 is a wired headset. Yup, you heard us right. Wired, in 2016. Don’t hold that against it just yet though as it has a few tricks up its sleeves. It delivers, in the name and as the main feature for the product, active noise cancellation. The general premise is that whilst the noise cancellation is turned on, the ANC-G5 will play a second audio stream alongside the device audio stream in order to dampen external noise sources such as the tube on your commute. Nifty eh? Let’s just take a look around the product itself. Aesthetically the ANC-G5 units are quite pretty. A combination of different metallic finishes on the units give them a modern look, and when touched or handled, feel premium. Unfortunately that metallic finish does not extend to the driver casing which is finished in plastic, and coloured to fit in with the metal materials. The 14mm drivers are prominently displayed adjacent to the metallic backs and that cylindrically shaped plastic casing, with the wire fed through in between to loop around and provide an additional stabilising element when in ear. On to the tips then, where multiple sizes are included in the box. If you’re interested in a little more comfort you might want to look at some third-party tips as these silicone ones aren’t much cop, but they do a job.

The ear bud wires snake down and into a control unit where a call accept/hang up button, a power LED, microphone pinhole, and the active noise cancellation slider which toggles the aforementioned LED. flowing from that control unit is a braided wire terminating in the 3.5mm jack. The braiding is very nice and tight and sets the unit off well, it’s just a shame that the top section of wire does not carry on the braided design, instead sticking with the bare silicone.

Elsewhere in the box sees a decent user guide, a Mini USB charging cable (yes Mini, not Micro), as well as a carry case.

The biggest aspect of these units that consumers will need to get over is the control unit and that’s where we’re starting. It’s big, bulky and cumbersome in terms of snapping it onto a shirt. It doesn’t weigh a huge amount but once it’s on your clothing you’ll notice it for sure and it will pull your clothes a little. If you have a bag on, then clipping it to that would be a much better bet, but make sure it’s somewhere you can get at it to toggle the noise cancellation if that’s required.

Fitting these in the ear is easy and thankfully they have a nice, clear left/right indication on the outside of the buds. The audio wire here acts as an additional hook to help the buds stay snugly fit in you ears and that’ a nice touch. The wire is prone to moving during use however so ensure you use the correctly sized tips for you from the ones included to avoid any slippage. On the whole we found the fit adequate, however the tips aren’t the best. The silicone is prone to sweating and there is a lot of give in them.

OK, moving on, the units themselves actually produce “nice” audio. They have a good level of bass, and acceptable mids and highs. The lows aren’t quite as crisp or rolling as the other Mixcder headphones we’ve tested however these are IEMs and not over the ear units. Taking that into consideration and the small driver size, these are more than capable of delivering quality many would be accepting of. They also get plenty loud and we can’t see anybody having any issues win that area. So they fit well, have a nice little additional use for the wiring loom, and sound nice. Let’s address the elephant in the room; the ANC. The active noise cancellation on the ANC-G5’s is triggered by the main button on the control unit. At first, there was no discernible change other than an increase in volume. Could this simply be that the music was coming across clearer due to the ANC kicking in? We doubted as such as there was only the ambient noise in a quite room (in a quiet house) to cancel. We took the unit for a walk and tried it, along with being a passenger in a car, and that’s where the ANC seemed to come into its own. Variable external noise sources aren’t going to be able to be picked up and dealt with by the ANC with any degree of accuracy but constant sounds such as the hum of an AC unit, the sound of the road in a car, or the background chatter on the Tube all fall into categories that the ANC-G5 will deal with just fine in our testing.

When engaged in the above scenarios we found the sound clearer and louder; both halves of the equation which we failed at replicating in our original testing. It’s by no means perfect as there are as many scenarios this will work well in as there are where it won’t, but then you come back to the price point. At $49.99 these aren’t the most expensive units around.

Another thing to remember is that when you are in a situation where ANC is going to be handy, turning it on engages and starts to utilise the embedded 90 mAh battery. This is crucial as the stated “up to 8 hours” battery life is somewhat generous. We found that we could only hit 6 hours which, whilst technically still falls under the umbrella of the Mixcder claims, falls way short of the stated number. As these are wired units however they still function, sans ANC, when the battery is depleted. This turns out to be a Godsend as the 90 mAh battery, despite its slight size, takes upwards of 90 minutes to charge fully. Craziness! The Mixcder ANC-G5 is a mixed bag in many respects. The braided cable, the metallic finish on the buds, and the adequate sound are offset by the fact they just don’t quite go far enough. The braided cable is not continued above the control unit. The metallic finish is only slight and the driver casing is purely plastic, and the sounds, whilst acceptable, cannot be controlled by the “control unit” due to the lack of volume control or playback controls.

If you’re after a pair of active noise cancelling units for your commute, and you’re not worried about having a wired unit (pros and cons obviously) then these wouldn’t be a bad shout. We also think you’d find yourself bemoaning the lack of simplistic functions on the control unit however – something to bear in mind.

These aren’t a bad product, it’s just that they could be better with just a little more work. 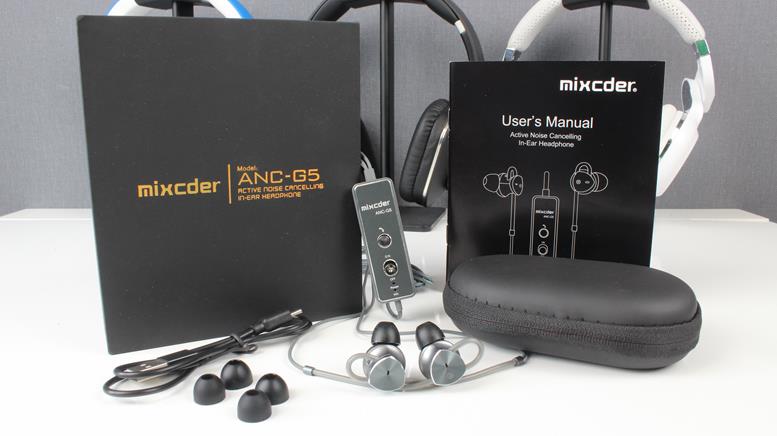