There are literally hundreds of fitness trackers available. The prices range from the budget to the downright steep. The MGCool Band 2 is the former, available for just £16.00 from the Elephone store. But is it any good? We’ve seen many cheaper fitness trackers just fail to deliver on the basics? Does the MGCool Band 2 buck that trend? Let’s take a look in our review. As with a lot of Far East imports, this unit has a mixed heritage. Branded MGCool doesn’t tell the whole story. This is a sub-brand of the more well-known Elephone, and is available from their store.

It’s clear that Elephone looks to compete in the same disposable gadgetry market that the likes of Xiaomi frequent with the MGCool Band 2. Cheap, functional, but not always well supported, or built for longevity in some cases, this particular segment of the consumer electronics is utterly saturated, so one has to dig quite deep to unearth rough diamonds.

The refreshing svelte box that protects the MGCool Band 2 product has little in the way of surprised upon opening. The unit is packaged in a small disposable bag, with the charging clamp, and a quick start guide. As this is a self contained unit, there are no additional bands or accents to be added; what you see is what you get.

The MGCool Band 2 is a small, silicone band with an IPX7 rated control portion which, unlike “pill” shaped units, is all part of the band and is not removable.

With a completely black aesthetic, Elephone follows many other manufacturers in delivering something as opinion-agnostic as possible in the design stakes. It’s nice enough, and more importantly, it’s comfortable enough. After all, this unit is to be used all day with step counting, running timers, as well as sleep tracking amongst its feature-set.

On the screen portion has only one capacitive button which cycles through the various modes available on the unit. Underneath, the heart rate monitor and charging pins are visible. It’s aesthetic is similar to the Microsoft Band. The silver peg on the silicone band has an “Elephone” logo on it which is the only sign that this is indeed an Elephone product, with MGCool branding on the screen itself.

The MGCool Band 2 has a companion application which manages pairing, and captures the tracked data from the band itself. I was extremely worried about using this when I set the device up. I hit the Google Play Store to grab it and the 2.4 rating hit me!

Happily, and we’ll come on to this, whilst it’s far from good, I’ve not experienced any crippling issues when testing on Android. There is also an iOS app for the unit which has a better score which might alleviate some concerns.

Diving into the actual band itself, pairing is as easy as pairing with almost any other Bluetooth device in 2017, which is to say, simplistic. Once paired, you can get to grips with the application and start to setup your profile with your date of birth, height, weight, step stride etc which all help to deliver a more accurate set of tracked metrics.

With that out of the way, steps were only ever about 4-5 ouch of sync with my actual step count which, for a device at this price point, is acceptable. Additionally, sleep tracking also seemed spot on with the frequency of me tossing and turning be captured and played back to me in the morning much to my chagrin. It’s not going to be perfect by any stretch, but as far as these units can, it was pretty close and mirrored what other, more expensive trackers also recorded during their use (Garmin Vivosmart HR for example).

Finishing up with the app, there are a number of nice little features which I hardly used but I could see a use for. For example, the “Anti Lost” (translations issues..) notification will chirp when you move too far away from your Bluetooth tethered device. Furthermore, the ability to control Music playback on the device, a rather strange “Camera” button emulation mode, as well as alarms, hydration alerts and sleep preference settings are all welcome additions. Using the built in heart rate monitor was simple enough and can be engaged via the app or by the unit itself by toggling through the modes to the heart rate section. A long press on the device button kicks off the measurement. Rather frustratingly however there is no “exercise” mode that sets a heart rate reading frequency; it’s an entirely manual process. This was certainly a downside to my use case whnn at the gym which is sadly relatively infrequently, so I’m sure this would be a bigger issue for those who go more often. These heart rate readings, along with sleep tracking and exercise/steps are all stored within the app and can be recalled. Other than historical visibility the only other reason for storing them is to ascertain how close to your stated goals you are – these are setup in-app also.

Then we have the usual smartwatch features you’d expect, such as notifications. Here’s where the unit is slightly let down. Whilst WhatsApp notifications, SMS and Phone calls all come through, there is little to no data attributed to them. Additionally during my couple of weeks with the device, any incoming calls would start to vibrate on my wrist long after I’d picked up the call. Additionally, following me hanging up I’d get a very strange notification to the unit which related to nothing going on on my phone. WhatsApp messages are signified by a brief vibration and the word “WhatsApp” – not incredibly useful.

Another corner being cut here is the charging mechanism. As I mentioned in the overview, the unit’s charging is a spring clamp which attaches to the charging pins at the base of the device. No charging ports are evident in order to ensure that IPX7 rating, however a slightly more aesthetically pleasing charging unit or more subtle mechanism would be welcome. It gets the job done though.

Speaking of the battery, the MGCool Band 2 sports an 80mAh battery. I’ve been using this device since around the 10th of January. That is, to date, 19 days and the battery is still going strong. The in-app battery notification shows 38% which is a hell of a lot more than the stated 21 days potential. Excellent battery life so far!

The MGCool Band 2 is a strange one. On one hand, it’s less than £20, has goal setting, heart rate monitoring, sleep tracking and can deliver basic notifications with excellent battery life. On the other hand it doesn’t do all of those things well, or especially brilliantly.

I’ve used the Xiaomi Mi Band (Pulse and original) previously and I prefer the feel and the loo of this unit, but the functionality of Xiaomi’s offering.

For £16.00, I don’t think you can go wrong, but you just need to know what you’re buying. You’re buying into a potentially short lived product in terms of support, with basic functionality and rudimentary smartwatch notifications. If you’re looking for that or happy to accept it, then it’s a bargain. If you want an altimeter, GPS tracking, and constant heart rate monitoring, well this unit has none of that so look elsewhere.

It’s certainly a product worthy of note simply due to the price point.

For more MGCool goodness, check out their links: 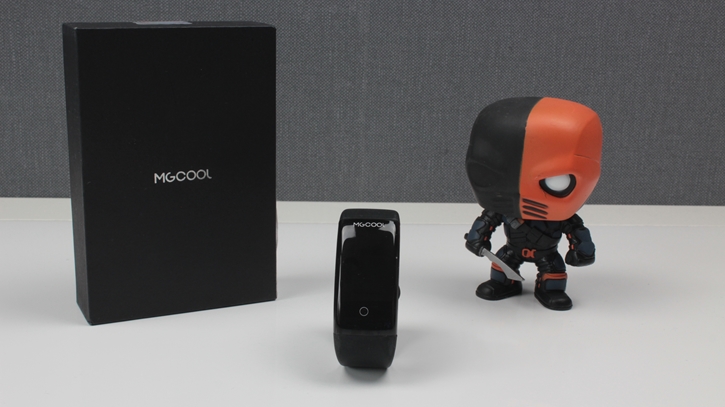