I had heard about MEEM originally during their Kickstarter campaign during early 2016 and it seemed like a cool idea but I am not the kind of person who invests in products so early on as I have heard story upon story about failed campaigns and the backers losing their money. I then didn’t hear much about the product until late October when I saw a Facebook advert for their products and that they were officially on sale now. So I asked to test the products out to see whether they are worth your hard-earned cash.

Thanks to our friends over at MEEM for sending these out and we are also working with them to give away 1 of each variant (iOS & Android).

The products have more of a limited range now compared to the Kickstarter campaign as there is only a 16GB model available for the Micro USB version and only a 32GB version for Lightning products. The packaging experience was really nice considering the price. You have a black and neon green theme across the packaging and there are instructions on the box to tell you how you can use it.

Inside the Lightning variant box, you get the cable itself, a simple get to know me guide which reminds me of Apple with its simplicity. There is also a set of 2 ‘Do the I’mpossible’ stickers which is a play on words, alongside a 3-year warranty and an extended user guide for iOS. The actual casing that holds the cable and the accessories is an embossed black box with the MEEM logo across all the box.

The micro USB variant does have some differences such as the much wider box and the logo isn’t embossed across the box but instead a simple MEEM brand has been placed there. There is a detailed user guide for Android, a firmware licence agreement, an end-user licence agreement, a 1 year warranty and the 2 stickers as seen in the iOS box which is a nice touch to see although I doubt I would place it anywhere. Once you insert the MEEM cable into your Android device you will probably see that it has come up as a storage device so you will have to manually download the app. But on the Lightning variant you will get a prompt on the screen to download the MEEM app from the iOS App Store. This does remove a step and the simpler the process the better. Once you have installed the app on the iOS side of things, you will firstly be prompted to allow access the contacts, calendar, photos and permission to send notifications. Following that you will be prompted to set a pin which will mean unauthorised users won’t be able to access your data from your MEEM and so your data is safe even if you share your cable with others. Following that I was promoted to download a software upgrade. After that I was presented with the home screen and I was able to sync the data and its literally as simple as dragging the name of your device from the left hand side onto the one on the right and it will start to sync the data. The idea of the product is great as you will always seem to either lose your phone or have your data wiped at the worst of times and this guarantees that you will be able to get your data back as well as being able to charge at the same time.

The connectors on the end of the cables are joint onto the storage and processing section using a flexible rubber which allows you to bend the cable like you would on a normal lighting or micro USB cable. This section does start to bend and it retains its position which may not be noticeable at all to most people but I do feel like it may start to annoy me.

The entire electronics section of this is about 7cm in length with the entire cable being over 120cm in length. This is handy as it is 1/5 longer than standard cables so you will be able to use it a fair bit further away from a wall socket.

The good thing about this is that you don’t ever need to connect to this a computer as all the processing happens within the components unit with its built-in 1GB RAM. This basically means you aren’t reliant on any cloud services such as iCloud or Dropbox to download your data from and you are also not reliant on owning a computer so you have the flexibility of the cloud but without the requirement for a computer.

The green colour is also good because it means that you will easily be able to find this if it is placed inside a bag or when looking for it in a plethora of cables. And it also is much easier to clean compared to a first party cable. I personally have not had any issues with the lighting version with it showing up as a non-certified device.

Overall it’s a great idea to get a daily backup of your phone as the MEEM cable will automatically start backing up within 20 seconds of you plugging the phone in automatically and you can cancel this by going into the app and cancelling it. 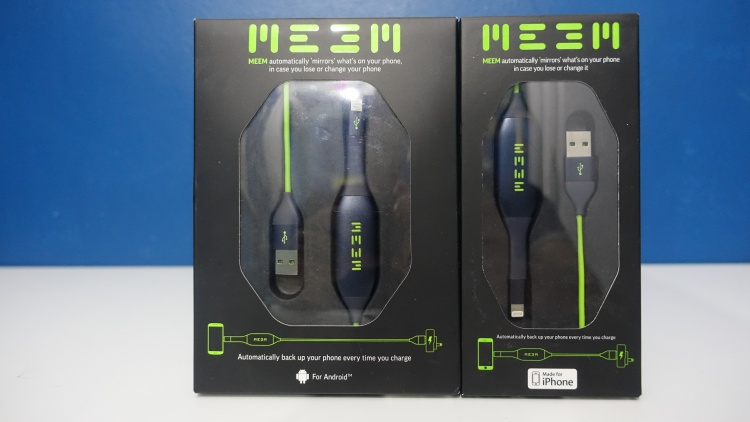