This is perhaps the smallest speaker we’ve looked at here at MTT, and yes, it’s another Bluetooth speaker. Whilst most Bluetooth speakers boast about battery life, aesthetics or waterproofing, the Lker Grace Mini is content with being one of the smallest! To see what we thought of it and whether there is a punch packed from this tiny unit, read on. Let’s start with the obvious; this thing is tiny. Not just small – tiny! We’re looking at a device that’s just 4.2cm in diameter and has a height of 4.5cm, weighing just around 70g. See, tiny! In the box comes the unit itself, a USB to 3.5mm charging cable (yes, charging – we’ll get to that), a 3.5mm to 3.5mm AUX cable for connecting devices, a user manual and a leather carry case which is only slightly bigger than the device itself. Did we mention it’s tiny?

The unit is available in multiple colours, although we have the Black version. It’s a glossy black too, but with a yellow braided lining to the speaker which accents the device nicely. The glossy black metal finish is offset by cut horizontal grooves around the circumference of the unit. Not only does it catch the light in some nice ways, but it helps with grip, and due to the grooves there isn’t much in the way of fingerprint grubbiness either. Result! Let’s take a bit of a tour. Along the top you can see the speaker recess and that lovely yellow accented speaker surround. The body is purely metallic with the contoured lines giving it a lovely feel, along with Lker Grace branding, a notification/power LED on the front, with the backside showing the 3.5mm port. On the bottom of the device there is a rubber ring for stability and to no doubt muffle vibration as well as the On/Off/Pairing button.

Yes, you spotted it didn’t you. There’s no microUSB port for charging. Instead the unit serves power across a 3-pole audio jack connected to a USB cable. Strange, yes, but it gets the job done. It takes around 3 hours for a full charge however.

OK, so it doesn’t have the ability to ride insects, or shrink down to an Ant’s size, or indeed scale up (spoiler for Civil War), but you get the picture! It’s small and it packs a fair whack too.

The power output is rated at just 3W but as the unit is firing all of that out the top it feels a little more beefy than it actually is. Towards the top end of the volume scale, which is controlled solely by your device, it starts to distort a bit, but that is to be expected. That aside though, this thing belts out audio like nobody’s business. The bass is quite slight as you’d expect but the mid and highs are ample enough for indoors and for a small number of people around for dinner, would be perfect for background noise.

The second part of the Ant-Man analogy is in the battery department. We managed to get just shy of 5 hours continuous playback from this unit which is phenomenal considering the unit’s size. Pocket sized power for sure! Yup, Lker aren’t quite done here. So whilst it’s nothing Earth shattering, they have included a carry case. Only slightly bigger than the device itself, it serves to protect the unit as well as still being eminently portable. Now if only it wasn’t stitched all the way down on the back so it could be hooked on a belt or a carabiner. Still, better than nothing by a long shot.

“If Scott Lang needed a Boombox to listen to whilst riding ‘Anthony’ then we’re sure this would be it.”

This little device really is a pocket dynamo. The sound it can produce is good enough to be taken on the road and used as a portable music player, as well as with it’s battery life, a nice audio book/podcast player. It’s not the most powerful of devices but it’s one of the most powerful at this size we’ve seen and at just £33 it’s got to be worth a punt.

Yup, there are cheaper Bluetooth devices, and there are more powerful ones. Harking back to the 90’s where the smaller things got the better they got (so marketing teams would have you believe), the Lker Grace Mini proves there is truth in that particular venture and it’s size is the key selling point.

We’d recommend checking it out before dismissing as a gimmick. 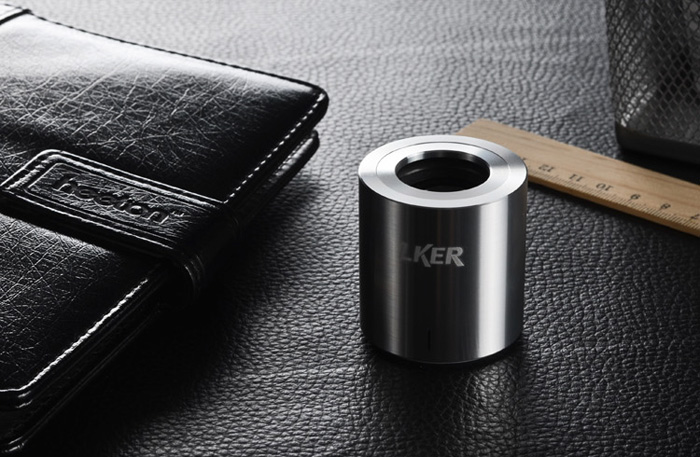