The J&L Real J&L-103 Bluetooth Earphone Review, another offering from J&L but how does this one stack up?  Read on and find out. So we have a pretty small box here.  Opening it up all it’s all rather compact and we have the buds, a soft baggy thing, a little plastic bag with tips and a micro USB cable for charging.  Oh and they have inner ear guide things on.  Hmm yeah they seem to be positioned as though these are to be worn down as in common among normal people.  Yeah we’ll see about that, way hey they can come off nice and easily.  Woo and then they can be worn up rather well, ahh that’s much better.

So pairing the thing up to a phone, the Lumia 735 because it’s usually the best sounding option.  So things start to play and these sound rather good.  Not as big in the bass as I expected.  Actually these are really rather lovely balanced.  30 min later I’m getting the voice chiming in “battery low”  sigh, well that’s practical I guess,  stupid needing charging things why don’t batteries just last for ever.  Still I’m really pleased with how these sound.  I haven’t had a Bluetooth set in my ears for a while but these I’m really liking.  Really nice low-end to them, nice composure and scaling.

Very nice.  As is so often the case the bass is unsurprisingly somewhat elevated.  There is a rather nice balance though between scale and the quality of the output.  Actually I might just give the edge to the quality.  They are for a rather cheap pair of Bluetooth earphones really quite good.  It can deftly turn its hand from “Love song for a Vampire” to “Professional Widow” in the blink of an eye and do both justice.  There is a bit of a trail away in the far depths but well, that’s to be expected.  Comparing to other things of a similar nature these I think have got the quantity/quality balance just about spot on.  It should be enough to please your typical mainstream listener but be credible enough to satisfy those who like things a little bit better.  It is a fraction on the firmer side, and there is a bit of a dip in the mid/bass cusp so the bass while elevated doesn’t unduly dominate.  It also slightly prefers to hit that play a smooth long note.  The bass here is best suited to a more, poppy, faster paced beat.  Granted that’s what its most likely to encounter in the wild so it’s a good option.

You know while my brain is finding the bass here to be very much middling.  Not too much in any direction so it’s highly capable of doing more or less anything.  It’s just not capturing the soul, like a Ford Mondeo, its fine, really not bad at everything but it doesn’t take any acoustic aspect and shine.  Highly competent, capable, good quality and well scaled bass.

Rather like the bass, these are very much sitting in the idle again.  Able to do anything you ask of it, it’ll do it pretty well too.  You know I’m just still not feeling it, it’s all very good, I really have no complaints at all.  For the 30 quid and being Bluetooth its great value for money that’s for sure but….. it’s all just so in the middle.  John Stevens to Aqua it happily does them both, they both sound good too.  Still I’m just not particularly moved, is it me?  On paper everything is good and I cannot say it does anything wrong.  Pretty good agility, rather good tonality, equally capable at male or female vocals.  Strings are nice too, a little but lacking in definition perhaps, just a smidge.  It’s all rather good.

Quantity wise, they are rather middle of the pack.  The mids are a little behind the bass but about the same as the treble so they have an overall pretty reasonable balance.

Pretty good.  For the money and them being Bluetooth I really again have no faults.  The detail is pretty good, the treble has enough of a bite to let you know what’s going on but doesn’t dominate and may lack as pronounced an edge as some may like.  However for a products of this level it’s exactly the sound you want to go for, enough to let you know whats happening but not so much it makes badly mastered or bit rate stuff unpleasant.  I don’t know if it’s dumb luck or someone has spent a serious amount of time playing with the output of these ta get things so very, very evenly handed.  Seriously at everything they are rather good.  From bass heavy to treble heavy stuff they quite happily got on with it.

Rather well scaled in terms of grandeur.  There is largeness to their scale but not a huge degree of distance in any direction.  Nicely surrounding though just that lack of distance, ahh well still it’s nice.

Well they had those inner ear guide things and I have never liked those, so off they came.  Once they were gone I could wear these up and while they are big, they fit great.  In the ears with some Comply’s on and they worked great.  They are big so if you have small ears you may want to have them sticking out rather than back ward pointing.

Great.  Again they are rather big so if you have small ears maybe less so but worked perfectly well for my ears.  I was happy to wear all day.

It’s one of those flat cables that I am never wild about but it all worked fine, ever wearing up and over my ears.  No issues there.

You get a bunch of tips and a few pairs of those inner ear guides.  I get why but seriously just wear the things up over your ears and you really don’t need those things.  Oh and you get their rather plush baggy things for them.  A hard case might be nicer but it’s probably the nicest baggy I’ve come across.

I did have a little issue with one bud, there was a slight rattle if I shook them.  However when they were magnetically clasped together, no rattle.  Also there was no rattling about acoustically in use so I’m not sure what was the cause.  Otherwise everything else seemed good.

While I’m a total sucker for the gun-metal of them and as such I’d say they are one of, if not my favourite looking Bluetooth earphones.  They are a bit big compared to normal stuff but then they do need to contain battery, magnets etc.  I like their looks.

Pretty good.  They seem to be sealed and as such are one of the better isolating dynamics.  I was perfectly happy using out and about, on a bus too.  As usual maybe not one for Tube commutes or along flights but better than nothing.  Naturally they are easily enough with music playing that you could step out in traffic because you didn’t hear anything, you need to use your eyes to stay safe.

They quote 6 to 8 hours and that seemed perfectly reasonable.  If anything I’d say towards the upper end of that though it’ll depend how loud you play them back and what Bluetooth version your source supports.

Great.  While they are fine and middle of the road in most acoustic aspects their value is quite excellent.  A good-looking, Bluetooth earphone that can do pretty much everything yet only comes in the 30 quid.  You really can’t fault that.

So these are pretty good.  Nothing about them is amazing or anywhere do they truly excel, they don’t.  Still to go back to my car analogy, they are like a Ford Mondeo nothing exceptional, nothing ground breaking and for any particular aspect they aren’t really at the top of the pack but they do everything.  They do everything rather well too, nothing exceptional but everything they can do well.  As a generalist, Bluetooth earphone they are going to appeal to the masses and be a pretty universal crowd pleaser.  For their price I’d be surprised if anyone had a listen and was unhappy with them.  No matter what your musical choices they do a pretty good job of it, every time.

So the down side, well mostly for reviewing rather than actually using as that they are so middle of the road crowd pleasing, that there isn’t much for crazy audio people with 50 earphones to get all excited about.  These are your mainstream crowd pleasers.  These are for those who just bought a phone with no headphone jack and doesn’t really know anything about audio.  They want something that’s Bluetooth, not too costly and is good enough.  These are perfect for that user set.  Also since it’s nearing Christmas time, I think they would make a great gift pair of earphones.  Their mainstream sound, good quality and with a crowd pleasing balance is highly likely to be liked by just about everyone.

So would I / should you buy one?  Me, actually with their looks I just might, particularly if I didn’t have so many other things.  You?  Well if you’re reading this there is a good chance you are a crazy audio person and if you are, then maybe not, well not for yourself anyway.  These would be great to get as something for a friend or someone else to give a taster of audio.  These are good, very crowd pleasing generalists that are well suited to gifting.  It won’t break the bank and you can be reasonably certain they will like their acoustic balance.  Oh and of course they look rather nice which is simply the icing on a rather attractive package. 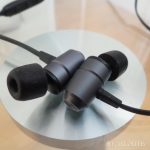