J&L Real BTS22 Bluetooth Speaker, you may recall its smaller sibling, the BTS07, well this is its bigger and i dare say more pretty sibling. So we can see it looks better but how does it perform? Read on to find out.

Well I should probably start by saying I’ve got a fair level expectation from the 22. You see I just reviewed the BTS07 and I was so pleased by it that I asked if I could get its larger sibling, the BTS22. There is a bit of difference between them, not least of which because the 07 was rubber clad and water-resistant. The 22 is twice the size and it’s got no rubber. Its covered in what I think is aluminium, in an apple esq look. The speaker grill is the same sort as on the 07 bit this time it’s white. No lanyard either, this one is clearly a little more intended to be used indoors and not on the go. Of course it’s still quite portable so there is no reason it couldn’t come with you on a picnic but I just see it as something to use in a kitchen, bedroom, hotel room etc etc.

After charging it up for a while, I like that it’s got a dedicated power on off button, sitting beside in the line in and the micro USB for charging. On top are the 3 buttons, though it has the same strange configuration as the 07. Play/pause in the middle then flanked by volume controls. However they act as track back and forth buttons initially and only do the volume if you long press them. You get used to it pretty quickly but why no markings to indicate they track skip?

Anyway firing it up and it’s just as fun as its sibling was, this however has more fullness and a bit more volume, i.e. louder. Weirdly it seems happier with bass notes than treble, still fun though.

Well you know, just like its little sibling if you think you’re going to get proper deep lows then keep on dreaming. I mean the thing has what, 2 drivers at an inch in diameter and a bass radiator that is maybe 2 by 1 inch. If you think that’s going to compete with real drivers your mad. However I find that the little beast has a right old go of it anyway. I’ve used the analogy of a furious little bitty puppy before, it valiantly trying to tear to bits a slipper. It’s trying to be a big, butch, gruff and a wild beast tearing that slipper to shreds but the reality is that it’s just adorable. It’s doing the very best it can but while it fails at its intention it does it in such a way that find yourself smiling. You can’t help but like it, you know it’s not being what it should be. It’s just so little and adorable. While the little 22 isn’t never going to be a wild party beast it tries so hard. It’s just so nicely suited to something you can slap in the kitchen, play I a little music, maybe a podcast or two. I know it’s all a bit mid/bassy but it’s much better at putting out a fair little thump than you would expect. It can vibrate itself like crazy but its little rubber feet do a good job of keeping it in place.

Not at all bad. They are a bit mid/bassy influenced however, they lack dryness or air. Hey I can live with that. Overall its clarity is still pretty comfortable and knocks spots off any phones speaker output. This is super especially noticeable when you use it as a speaker phone. Doing so the other party sounds great, lots of volume, nicely clear, well as nicely clear as a phone call can get anyway. It’s very, very usable. Music though well it’s a little warm, little bit of the air has been sucked out but it’s an itty bitty tiny speaker. One thing that got noticeable was that the mid’s can be quite directional. If you point the speaker at your face they opened up, have it flat on your desk and they diminished, leaving the bass to feel comparatively boosted. Well that’s just the nature of a wave. Still it’s a fun little bugger.

Well, the highs are pretty so so. They lack extension and when you really push their volume they start to break up. It’s best to stick to stuff without abundant treble but that’s going to be the case with anything at this sort of price anyway, treble is the bit hardest to get right so it’s wise to simply dial it down in cheaper stuff. It also serves to push the bids out a bit which is where they arguably do best anyway. Not bad but nothing special really.

It isn’t vast. While it can spit out a fair degree of loudness its being a bit directional like its sibling I found that it was at its most diffuse when on its back and the speakers pointing upward. However this physically is meant to be set forward facing. It then becomes a little directional and smaller sounding.

Like its sibling, its highs, not so much, its mid’s are not bad. The bass well its having two drivers and that bass radiator its little bass output can give a right little punch. If you hold it in your hands the thing will vibrate like mad. It’s a right little try’er.

Directionality aside you can make this little thing spit out a loud little noise. When getting maxed it becomes a bit unruly and certainly loud enough to start irritating people near you. It’s a fair little riot when it gets going which is either great or obnoxious. It should be comfortably loud enough to listen to stuff in the kitchen or bathroom while showering.

I would expect very good. The thing is clad in a layer of aluminium and while nothing screams I’m a super fancy premium product, it’s all neatly put together. Its metal outer too to me would indicate that any run-ins it has with other objects that it will likely be the victor. I see no reason why it won’t live till its batteries go into decline.

While I could hear the other party very well, they reported that I was very quiet. I had to raise my voice somewhat but once done it seemed okay. Perhaps I was speaking below the threshold for it to screen out background noise? I don’t know. So while I think it would make a great looking little speaker phone, certainly it would look great on any desk I’ve no idea where its mic is situated to best talk towards.

It’s irritatingly sold out on Amazon UK so I can’t see its price but I think it was £32, Amazon US has it for US$46. I think its great value, if you’re anyone that ever uses your tablet or phone to watch video or podcasts on its speaker this is just way beyond the capabilities of any phone. It’s so much louder, so much cleaner, so much more fun too and I think it looks rather nice. Though I wish I had a silver and black one but I think its silver and white, or black all over. Still it’s a great little portable speaker for throwing in a suitcase or to live in the kitchen or bathroom.

Is this speaker great sounding? No. it’s an itty bitty tiny speaker with drivers that can’t be more than in inch in diameter and there are simple laws that govern what it can and can’t do, no matter how much money or power you throw at the problem. However this is aimed at spanking the bottom off the likes of audio output your phone or tablet can muster. This is meant to compete and wipe the floor with those, portable things.

The BTS22 is meant to play you a podcast in the kitchen while you cook or do the dishes. It’s meant to play you upbeat morning tunes to get you going in your morning shower. It’s meant to lull you gently while you relax in warm evening bath. It’s meant to live in your travel bag for when you got some business meeting far from home and your spending the night in some bland Travel Lodge. It also just happens to be able to take calls on two so can double as a rather good-looking desktop speaker phone.

So would I / should you buy one? Why not? It’s maybe not as cheap as its smaller rubber clad sibling but it is rather better performing especially in the lows. It can put out a fair little kick for something so tiny. It’s just fun, I know it’s not getting lots of stuff right but it’s so fun nevertheless. No I’m serious, it’s a really fun little thing, it trying to thump out a big bassline, vibrating and shaking like a lady’s evening toy. Just all round super fun to play with and it looks pretty good too. 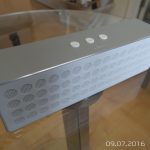