Something a little different this like from our friends over at J&L, this time we have their itty bitty Bluetooth speaker / speaker phone. What makes this different in that its clad in rubber (ooh err ;-)) so you can use it on the beach, by the pool, in the rain and even in he shower. How does it perform you may ask, well read on.

The speaker is a dinky little thing. I know form the pics that it was something small but hey, up close it just seems so dinky. It’s a curious design though like it has a lanyard loop, it even comes with a lanyard which seems weird. I mean what are you going to have it dangle from your wrist? You could I suppose, well actually you can’t as the supplied lanyard is so small you wouldn’t get your hand in it. Perhaps that is why it’s smaller looking in real life than I thought? The speaker itself it’s all coated in soft rubber and it has strange symmetry to it. The front and the back both have a speaker grill design, the front though has some raised rubber buttons where the back has a flap. The flap being for the line in and the micro USB charging socket. Oh the inside of it even has indentations so the sockets are plugged when the flap is closed. It’s quite a snug fitting flap too.

Anyway let’s stick the thing on charge for a while and see how it’s ready to go.

Now as speakers go it’s pretty small and to make proper lows you need air movement, which normally means a big driver. The Speaker unit is not big therefore it really can’t produce proper lows, this is physics. But you know what, for its diminutive size it tries its little heart out. Lol it’s a right little trier. I means it’s never gonna be audiophile stuff but it’s really not at all bad for its itty bit size. Loll it vibrates like a little monster in your hand. It’s extremely humpy and the “lows” it spits out are pretty much all in the mid/bass range but come on, it’s so small and cheap. For something that’s meant that for use in the shower, at the beach, by the pool, you know, environments that would kill most speakers. I would point out though that you increase the volume its ability for the lows to keep up diminishes. It’s trying, you can tell it is really trying its absolute best but it just can’t keep up.

The speaker is clearly at its most comfortable in the mid range. It’s got good clarity, which its mid range clearness only grows with the volume. Again it’s that physics thing at work. Plus as the device doubles as a handsfree / speaker phone the mids are what matters most too. If you play very vocal centric songs you can get away with turning it really quite loud. Loud to the point I feel self-conscious about it playing at that volume. I want argue it’s the greatest quality in the word but for the size it’s pretty damn good. Good enough that I started end up listening to the music rather than the speaker (Kylie, Where The Wild Roses Grow) and then the next track came on and I was snapped back to reality. A song where the vocals aren’t so dominant and the bass become more noticeable by its lack of depth. Still its mid range is nice, it’s a little bit fun. It’s maybe not the best in world but it’s so waaaaaaaaaaaaaay beyond what any phone is capable of in bath clarity and volume.

Well yeah, like the bass a bit the highs aren’t very extended. Highs will consume power and frankly given its size you don’t want it to sound tinny. You want the illusion of body and that is helped by toning down the treble abundance lest it begin to dominate. There is a little bit hint of what’s going on but there really isn’t much sparkle or dazzle. A bit of a hint of shimmer. Yeah the highs are overall pretty subdued.

Well the sound is a bit directional. I found that it was at its best one its back and pointed up wards. That was best in the bathroom then it was on a self with another shelf above it. Still it’s a tiny speaker and no matter what you do is going to give you that big speaker feel. It sounds bigger than it is but it still sounds small and monopole.

It does a really hearty little job. Its dynamics are most in the mid range where it can rise up and be rather loud and prominent. Its highs and bass, they just can’t but I’d wager that’s no surprise to anyone.

For its size, its can really spit forth a mini riot. Its quality isn’t super awesome at max but it can really, really get loud. Loud enough that it could start vibrating itself across my desk despite its rubber outer that not only should absorb such vibrations but also grip quite well. However what was a little irksome is that the volume steps seem to be rather large so I ended up adjusting on the unit then fine controlling using the phones volume controls.

I rather like it. I’m not wild about the misleading back with its faux speaker grill but that aside, it’s nice. It’s kinda charcoal blackish rubber with the circular red speaker mesh bits. It would be nice it if it came in other colours too but I think it comes in only red. I also rather like its outer angularity, straight edges and sharp corners.

As to its build quality, well it would seem to be rather nice. Certainly its outer rubber sheath seems good. I wasn’t going to try ripping it off to see what it’s like underneath. Its durability is even harder to really say. While I’d think it physically able to stand up to lots of abuse with that rubber covering. That it’s also rated to be waterproof, IPX5 so that’s should be fine under water jets, you can look up exactly what it means if you care. What in practical terms means it should be fine to use in the shower and out in the rain. So pool side splashes or at the beach ought to be okay too. Just don’t drop in in the pool or in the bath.

Actually it’s a great little speaker phone. Very, very clear in use and can get pretty loud too. The other party reported they could hear me fine and stuff. I could hear them super clearly too. Poolside or in the shower speaker phone perhaps? Oh and its buttons accepted the call and killed it just like it should. Likewise the buttons all did what they say they are supposed to.

Bargain. With the summer upon us this would make for a great little, throw in the suitcase, speaker for going away with. Not that I’d want to sit and use on a public beach but you know. For in the hotel, or by the pool if you’ve maybe hired a villa. Or perhaps just for at home, something you want to play something while you’re in the shower? Or perhaps you just want a little but potent speaker phone for your desk, so you can deal with calls but not have to end up typing one handed. While you may be able to get something that can do all these things better, this is so versatile and its just 15 quid. At present that’s like US$20. Hell that’s cheap enough to get just for a holiday and if you use it in the bathroom at home it’s just bonus.

The BTS-07 Mini Speaker may not be conveniently named but it’s a convenient little device. Did I say little device, I think I meant little beast or perhaps little marvel. While it’s never gonna replace more significantly sized things it’s quite impressive given its size and its cost. Come on the thing is £15, what down side is there? At that price it seems good value to me for any one of its use cases never mind that it can do a multitude of things. This, a disposable barbecue thingy and off to the beach.

I really like it. It’s a fun dinky little thing. Acoustically reasonable, pretty decent mids and it has a valiant stab at a low end. It certainly utterly wipes the floor with every phone speaker output by a VERY considerable margin. Plus you can use it in places where you’ll want to keep your phone in a sealed freezer bag to protect it from the rain / splashes / humidity / sand / shower / whatever. Or maybe just from you dropping the damn thing, I mean it is rubber coated too for a reason and while I can’t bring myself to deliberately send it flying I’d hope it would stand up better than anything that doesn’t have a bouncy rubber coating.

So would / should you buy one? Hell, why not? It’s not going to replace your Hi-Fi or anything serious. While its sounds good for what it is and what it’s priced it is still a tiny £15 portable speaker. That is what it is supposed to be. It’s super cheap, you won’t likely worry about killing it so you can use it in the shower, at the beach, by the pool. The places it’s designed for but with no fear to do so because what if…..so what if the kids drop it, drown it, bury it in the sand? At worst it dies and you’re down £15. That it just happens to be half decent sounding and a pretty awesome speaker phone is all just pure bonus. 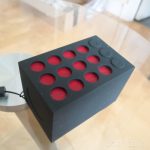