After years of catching up with the rest of the pack when it comes to screen size, Apple has started to cater to a vocal minority. There are those who prefer a truly pocket-sized mobile. I’ve already had the iPhone SE 2020 – which is based on the rather small iPhone 6 (for 2020, at least) template – and back in September, Apple announced a new 12th generation line up with the iPhone 12 Mini in the mix. I’ve now got my hands on the iPhone 12 Mini, which, as its name suggests, is dinky. Can this teeny, tiny smartphone really live up to the hype surrounding the prestigious iPhone 12 branding? Or, like the numerous “Mini” phones released on the Android platform, is it just a weaker device in fancy clothing?

The iPhone 12 Mini was provided by Box.co.uk in exchange for a full and fair review. Neither Apple nor Box received draft visibility of the review copy, and nor did they have any editorial input into the final, published article.

The first thing you’ll notice when the shiny new iPhone 12 Mini arrives is how small the packaging it comes in is. Apple is aggressively cutting down on waste, and that means ditching both the wall charger and the wired headphones for this year’s handsets. You still get a Lightning to USB Type-C cable so you can charge the phone from a USB Type-C wall charger or a device which has USB Type-C ports (like a MacBook or PS5), but if you’re upgrading from an old iPhone, you might find you’re out of luck. This is something to keep in mind if you don’t have any devices with USB Type-C ports in the house.

The second thing you notice when you remove the iPhone 12 Mini from said slim packaging is how tiny it is. It’s even smaller than the already-quite-small iPhone SE 2020 released back in April 2020, making it the tiniest phone Apple has released since the original iPhone SE almost a decade ago.

While we’re on the topic of throwbacks, it won’t have escaped your attention that the iPhone 12 Mini resurrects the same design language of the iPhone 5 (and the iPhone 4 before it). Apple has been obsessed with rounded edges for the majority of this decade, but the iPad Pro changed all of that – and I love it. There are too many phones around these days that look identical and pebble-like, so it’s nice to see Apple breaking from convention. I imagine the look will be aped by its rivals in the months to come.

Once you’ve gotten over the small dimensions of this device, you’ll notice that, despite the “mini” moniker, Apple has spared no expense when it comes to the materials used in the iPhone 12 Mini’s construction. The screen is covered in super-tough glass (so we’re told), as is the back – the latter point being important as it allows the phone to charge wirelessly. The power button and volume keys are in their familiar positions, as is the switch which automatically silences the phone’s audio notifications.

On the bottom edge of the phone, there’s a Lightning port for charging and data transfer. The device is waterproof, too, and inside it contains Apple’s revised MagSafe connection standard, which allows you to attach accessories and position the phone on the (optional) wireless charging pad. Sadly, the iPhone 12 Mini doesn’t charge as fast over a wireless connection as the other devices in the iPhone 12 range, but it’s still pretty rapid.

While Apple briefly resurrected Touch ID with the iPhone SE 2020, the iPhone 12 retains the Face ID system introduced by the iPhone X. Face Unlock is pretty solid these days, though, so there’s little reason to complain if you’re upgrading from a Touch ID-equipped handset.

Once upon a time, “mini” phones were basically just smaller and weaker variants of flagship devices, created in the same image as their bigger siblings but lacking key features and functions. That’s not the case with the iPhone 12 Mini; while it is missing some features which are present in devices like the iPhone 12 Pro (there’s no third camera, for example, and there’s less RAM), it is, for all intents and purposes, the same basic phone. It has the same Apple-made A14 Bionic processor, and the Super Retina XDR OLED display is just as bright and punchy as the one seen on other phones in the range. Apple previously used cheaper LCD panels in devices like the iPhone XE and iPhone SE 2020, so this is a welcome change.

With 4GB of RAM compared to the 6GB seen elsewhere in the iPhone 12 line, you might find that the 12 Mini struggles with really intense tasks, but I have to admit, I didn’t notice any hang-ups during our review period. My daily driver is the aforementioned iPhone SE 2020, which has 3GB of RAM and last year’s A13 Bionic chipset, and I can already feel how much faster and smoother the iPhone 12 Mini is in comparison.

It’s not all good news, however. Apple has decided against including a 120Hz screen in the iPhone 12 range, sticking with a 60Hz panel. It’s not a deal-breaker – certainly not if you’re upgrading from an existing iPhone – but given that many Android phones come with 90 or even 120Hz panels these days, it’s a shame that the super-smooth screen refresh technology didn’t make the cut (I imagine it’s being saved for the iPhone 13).

In fact, when you consider that the iPhone 12 range is the first from Apple to embrace 5G technology, it’s perhaps a little naive to expect the company to include too many innovations. 5G remains spotty in the UK, and if you’re out in the sticks (like some of us) then I wouldn’t rush to buy a 5G phone purely for faster download speeds. However, make your way to a town or city which does have 5G coverage, and you’ll notice an incredible difference; I found that speeds were in excess of what I get via our home broadband connection, which bodes well for the future.

As ever, the iPhone 12 Mini doesn’t feature expandable storage, so you’ll need to make sure you buy the right capacity. 64GB feels like a very small amount of storage in 2020, so you might want to opt for the 128GB model to avoid running out of space after six months.

If there’s one genuine weakness here, it’s the size of the battery. The iPhone 12 Mini has a 2227mAh power cell, and it struggles to get through an entire day of intense use. It’s hard to see how Apple could have crammed anything larger into such a small frame, but that doesn’t get around the fact that this pint-sized blower doesn’t have the kind of stamina that some of its bigger rivals possess. Even our iPhone SE 2020 felt like it lasted longer. 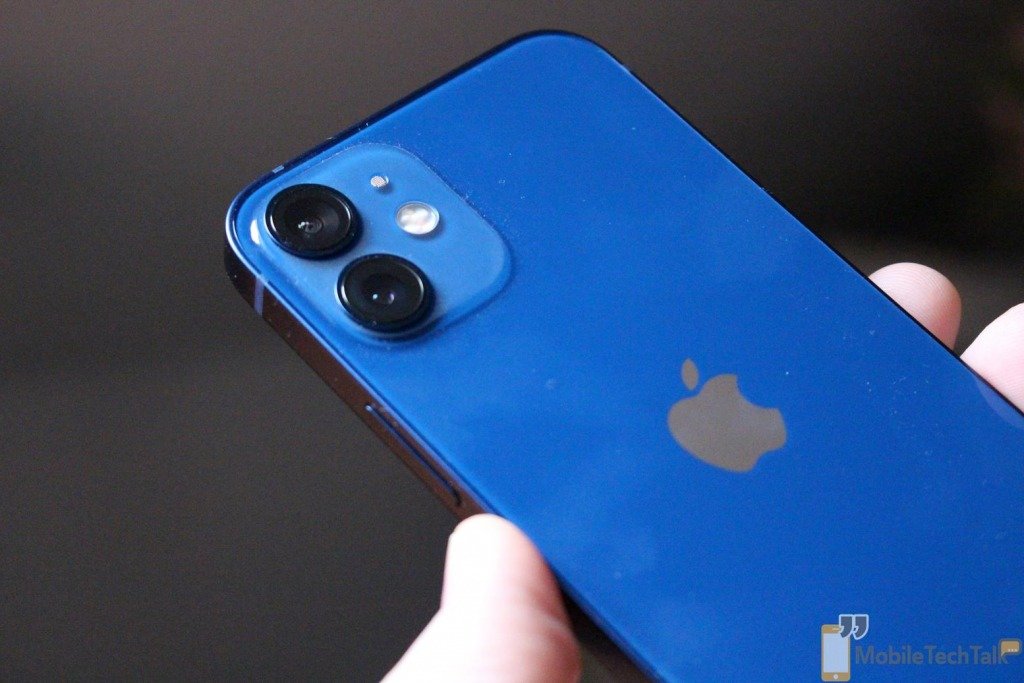 After sticking with a single snapper for both the iPhone XR and iPhone SE 2020, Apple has pushed the boat out somewhat with the iPhone 12 Mini. There are two cameras in tow here. That’s still short of the three-camera setup seen on the Pro and Max models. Despite the dual-camera configuration, the iPhone 12 Mini lacks the telephoto snapper introduced by the groundbreaking iPhone X. Here, the 12-megapixel main camera is accompanied by a second 12-megapixel ultra-wide-angle lens, allowing you to fit more information into a single photo.

Ultra-wide-angle shots are definitely an acquired taste with some photographers. The fish-style effect doesn’t lend itself to natural-looking images. However, ever since I encountered one on the LG G5 back in 2016, I’ve always been a fan. There are definitely times when being able to cram more into your shot is a good thing. I’m pleased that the iPhone 12 Mini offers this feature. It’s a shame that zooming in has to be done digitally. This results in a significant drop in image quality, but I think it’s an acceptable trade-off.

Thanks to Apple’s fancy new Smart HDR system, photos taken with the iPhone 12 Mini are bright and colourful, with the phone using additional AI smarts to rebalance images to ensure they look just right. There’s also Night Mode, something I’ve been missing on my trusty iPhone SE 2020; this makes low-light shooting possible but requires you to hold the handset still for a few seconds. If you’re trying to capture moving objects this can be a bit of a pain. Overall, Apple’s low-light shooting mode works decently.

Video recording is equally impressive, offering 4K capture (with Dolby Vision HDR support) all the way up to 60fps. You can also record in slow-motion at 1080p. The quality of the capture really is incredible, especially when you consider how small the phone is. 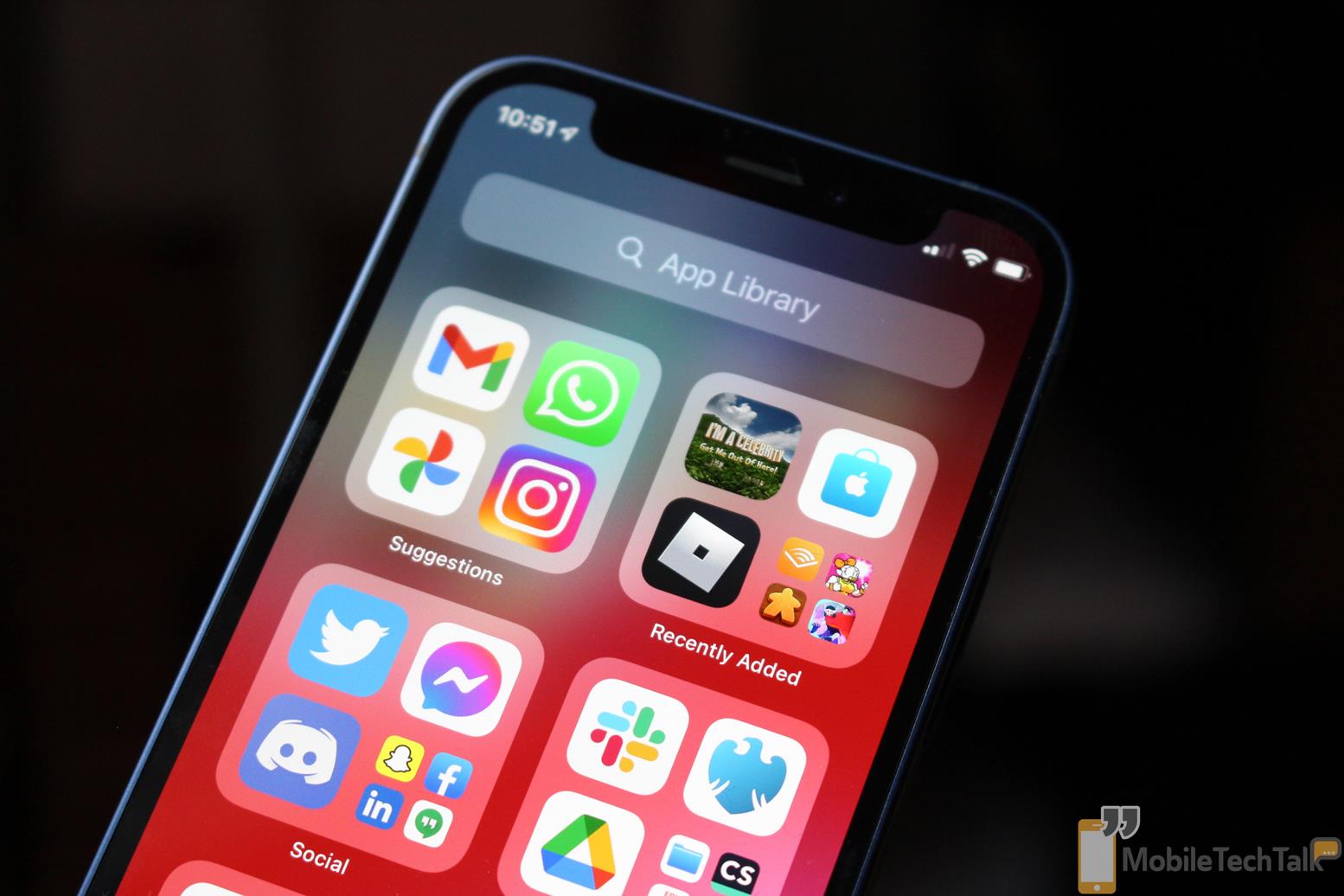 The iPhone 12 Mini ships with iOS 14 out of the box, and while the experience has remained pretty much constant over the past few years, this latest version does add some cool features – such as the ability to add Android-style widgets to your home screen, as well as a screen which intelligently compiles all of your installed apps in relevant folders.

It’s easy to poke fun at the fact that iOS has evolved so slowly over the years. However, there’s no denying that iOS is one of the most intuitive mobile operating systems around. Since removing the Home button, Apple has adopted a gesture-based interface on its flagship phones. Only the iPhone SE 2020 bucked this trend. It works well enough, and even if you’re coming from a rival handset, you’ll become familiarised speedily.

iOS organises all of your apps in a grid-like pattern, but iOS 14 does bring widgets to the party. Those widgets mean you can mix things up a little, popping weather updates, schedule reminders and more on your main home screen.

Another thing that’s worth noting is that the iPhone 12 Mini is virtually assured to get software updates for the next few years. This shouldn’t be underestimated. Some Android phones are dropped by their manufacturers after as little as two years. That’s worth keeping in mind if you’re buying this handset with the intention of holding onto it for a while.

There once was a time when Apple phones had a reputation for being too expensive and overpriced. I’ve seen the company change over the past few years. The iPhone XR delivered cutting-edge processing power at a reduced price, a trick the iPhone SE 2020 would repeat using a classic design. Now, the iPhone 12 Mini offers the latest Apple chipset, a pin-sharp OLED screen and a fantastic design, all for £700 for the base model. Sure, you can get Android phones that cost less, but they always seem to cut corners somewhere; the iPhone 12 Mini offers pretty much the same experience as the rest of the iPhone 12 range. It comes in a package which will be welcomed by those who are part of the one-hand-use gang.

Huge thanks to Box.co.uk for supplying the iPhone 12 Mini used in this review.