I have been wearing the Huawei Watch GT2 for the better part of 10 months at this point, and I love it. When Honor bought out their rebranded MagicWatch I was a bit disappointed to see that they had only chosen to stock the larger 46mm model, the same as my Watch GT2, well a few weeks ago Honor slyly popped the 42mm version up on its site and when I saw it I sent my PR person an email, I needed to see if the smaller MagicWatch was any worse, or if I preferred it more.

Honor PR provided this watch to me for review. I do not get to keep it and by the time this review goes live Honor will likely have their watch back. No money has changed hands between either entity and Honor are not seeing this review before it goes live. I used the 42mm MagicWatch 2 paired with my Huawei P30 Pro on EMUI 10.1, my Honor 9A on MagicUI 3, and on my Realme X50 Pro 5G over the course of  2 weeks. 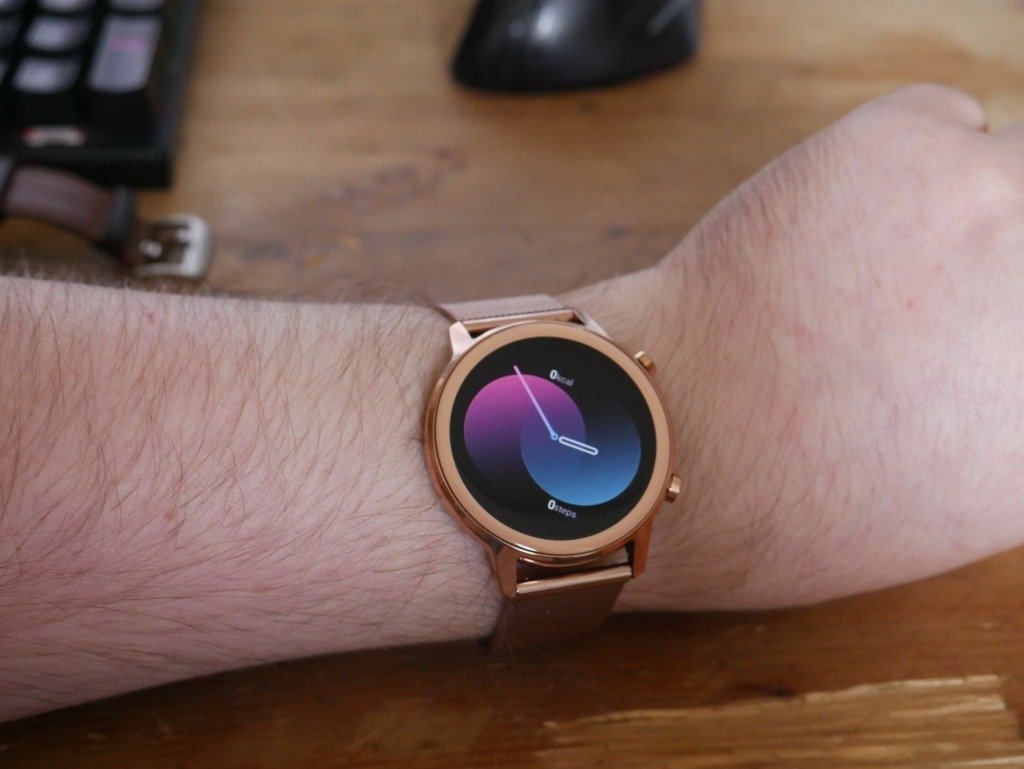 The main reason I wanted to check out the 42mm MagicWatch 2 is the size as well as the design. Whereas the 46mm GT2/MagicWatch 2 is a relatively thick angular watch, quite traditionally masculine, the 42mm is smaller with curved stainless steel chassis that the curved gorilla glass contours into, a much more traditionally feminine design, which is enforced by the fact that every image of the 46mm watch is on a male wrist, whereas the 42mm was always on a female wrist. 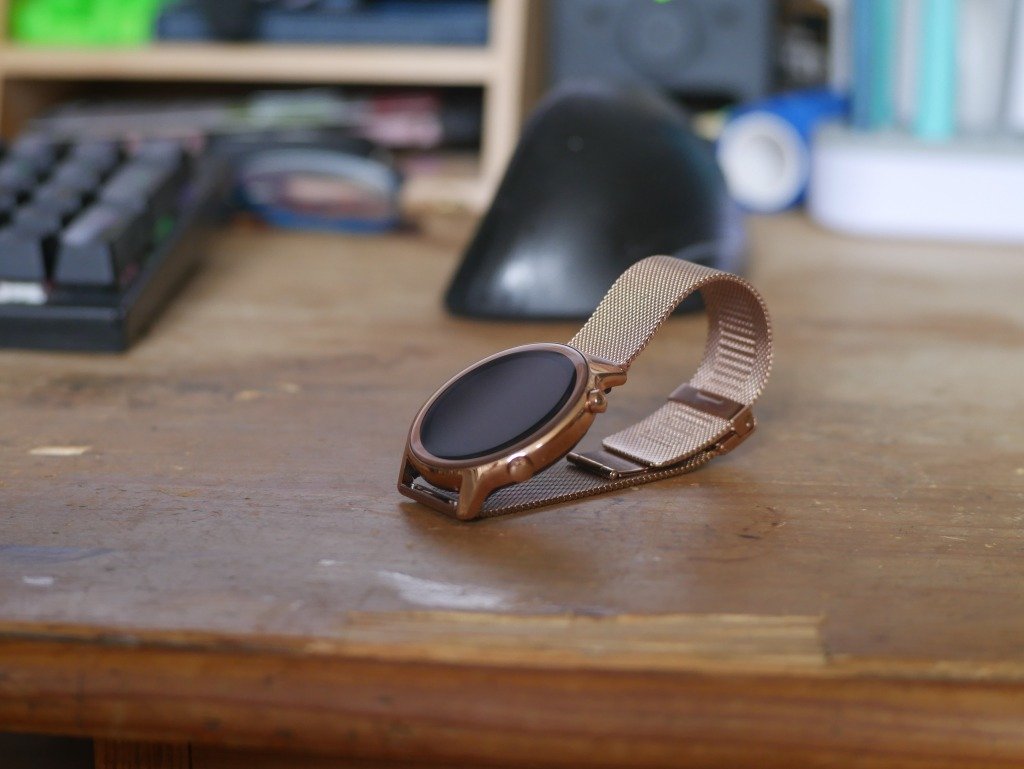 But despite this, I really like the 42mm watch, it invokes some of my older Seiko watches, and wearing the 42mm with a shirt is a lot nicer as it is far less likely to get caught on a tighter cuff, whereas the 46mm, which is physically larger in every dimension as well as being more angular, kind of gets caught on everything. 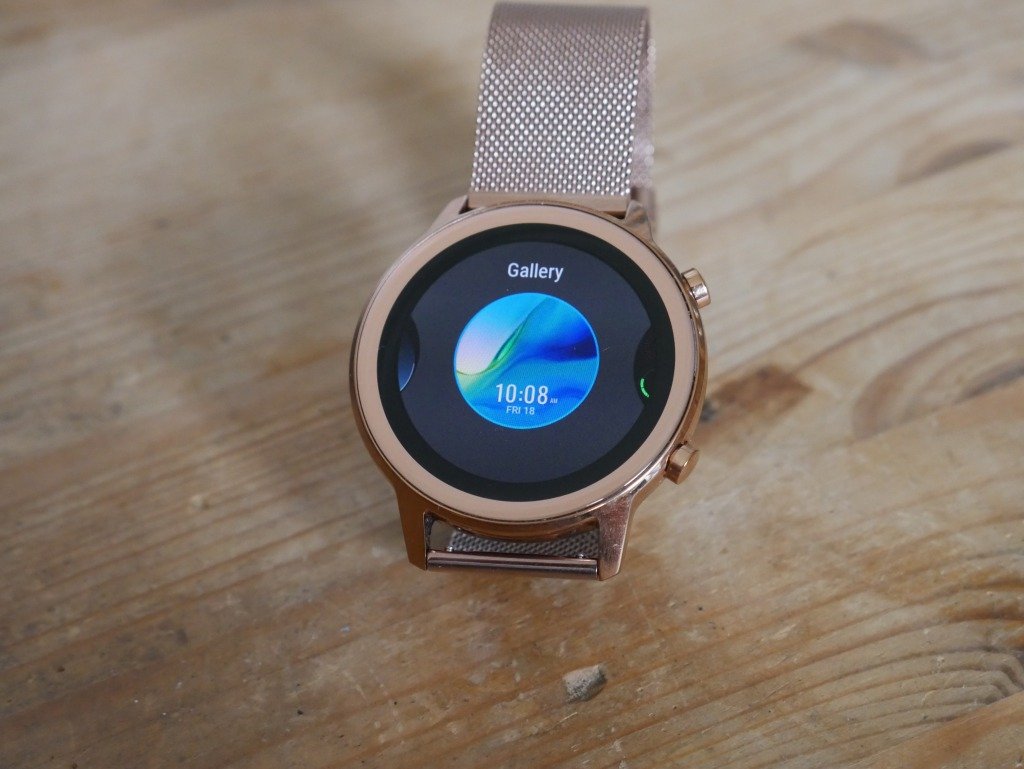 I don’t have the largest wrists, and as I said the  46mm is a bit overbearing sometimes, so the smaller, thinner, more curved 42mm is a really nice. My unit is the Sakura Gold variant, and whilst It’s not my favourite, I definitely prefer the black, and would have loved a silver version like my GT2, it’s still a very attractive and well-built watch. 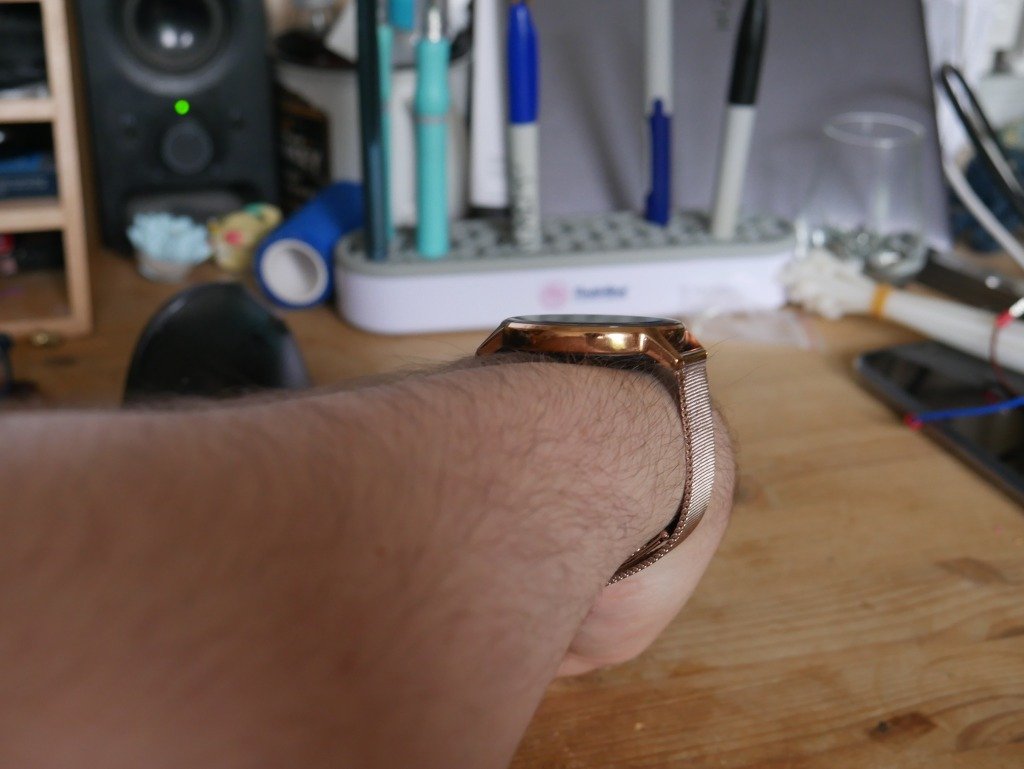 On the front, we have the 1.2” AMOLED screen which is just gorgeous. On my Gold unit, I have the gold bezel but on the black unit it is black, but the problem here is that this is not the only bezel, if you apply a lighter watch face, a secondary relatively thick bezel appears. It’s pretty obvious why Honor ships this default with a darker watch face, though I have to admit, I think I just prefer the designs of the darker ones anyway, but taste is subjective. 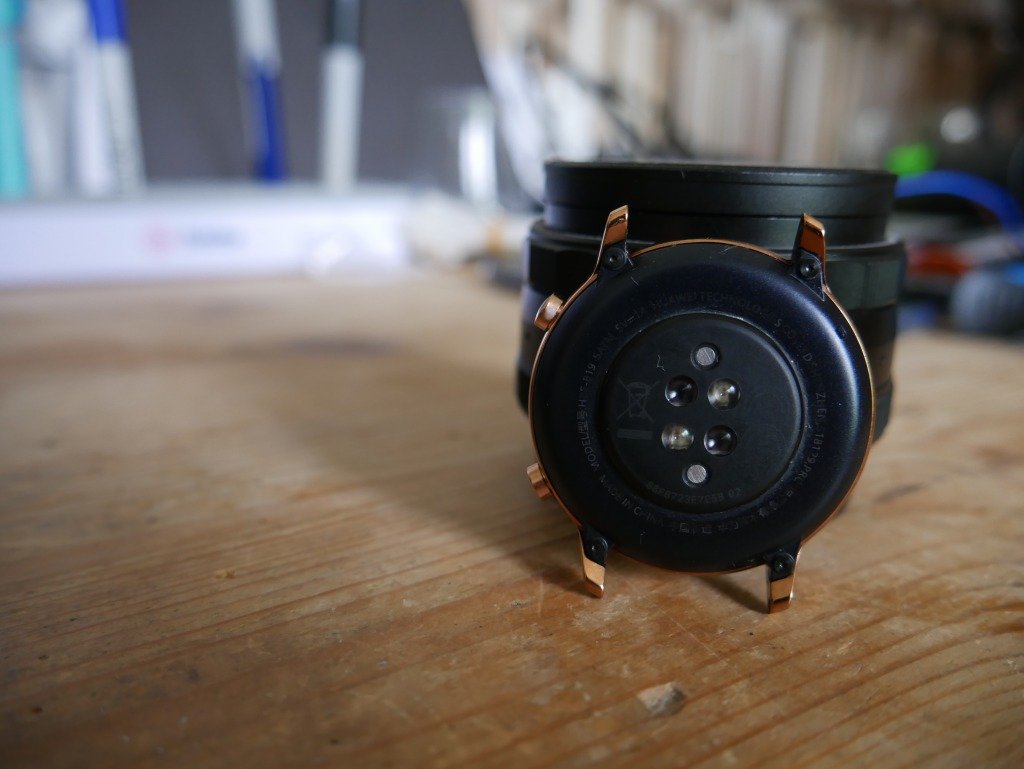 On the right-hand side, there are two buttons. The top button acts as a home button wherever you are, and on the home screen (watch face) acts as the app launcher button. The bottom button is remappable to almost anything in the watch, but by default, it opens up the workout selector as this is still a fitness first watch. The top and bottom just have the lugs, these are still a single piece with the front so the chassis colour carries over here. Lastly on the rear, we have a plastic panel held on in each corner with what appear to be T2 or T3 Torx screws This plastic panel has a raised divot in the centre with the optical heart rate scanner and the charging pins. The reason this is raised is so it makes the first contact with your skin, making the heart rate scanner work more efficiently. 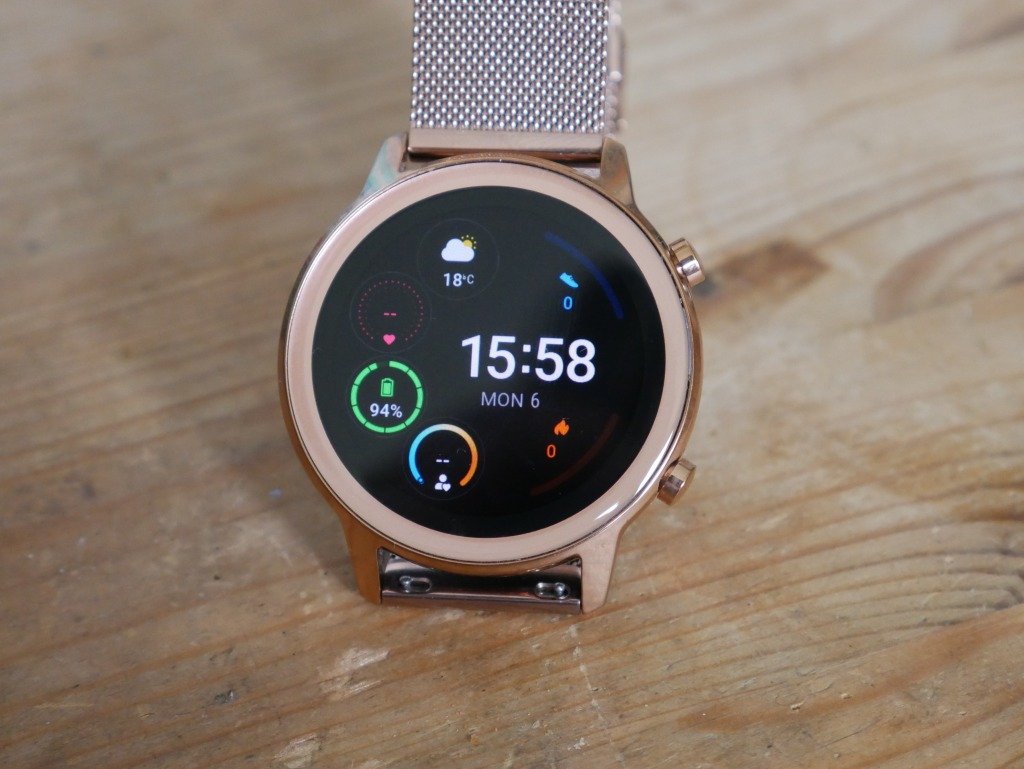 Lastly, I want to talk about the strap, my Sakura Gold unit came with a rose gold Milanese loop type watch band which I hate. The strap looks gorgeous,  but this particular one is a right royal pain in my derriere to adjust, and even when it is adjusted properly, it just wasn’t all that comfortable to me. Thankfully, the MagicWatch 2 42mm (man, what a name) uses standard 20mm watch lugs, so any 20mm watch strap you have will fit this, huzzah! So I just put an old leather strap on it and made the watch infinitely more comfortable for me to wear, even if the old busted strap doesn’t really mesh with the pretty gold watch, ideally, buy a new strap.

One thing I want to note compared to the larger watch, the 42mm version doesn’t appear to have a speaker or microphone, so no taking or making calls on here without Bluetooth buds.

This is really easy, It is, as far as I can tell apart from the boot screen, identical to the software on my 46mm Watch GT2, which is great. The software on the watches are small, lightweight and take advantage of everything the Kirin A1 processor can offer. 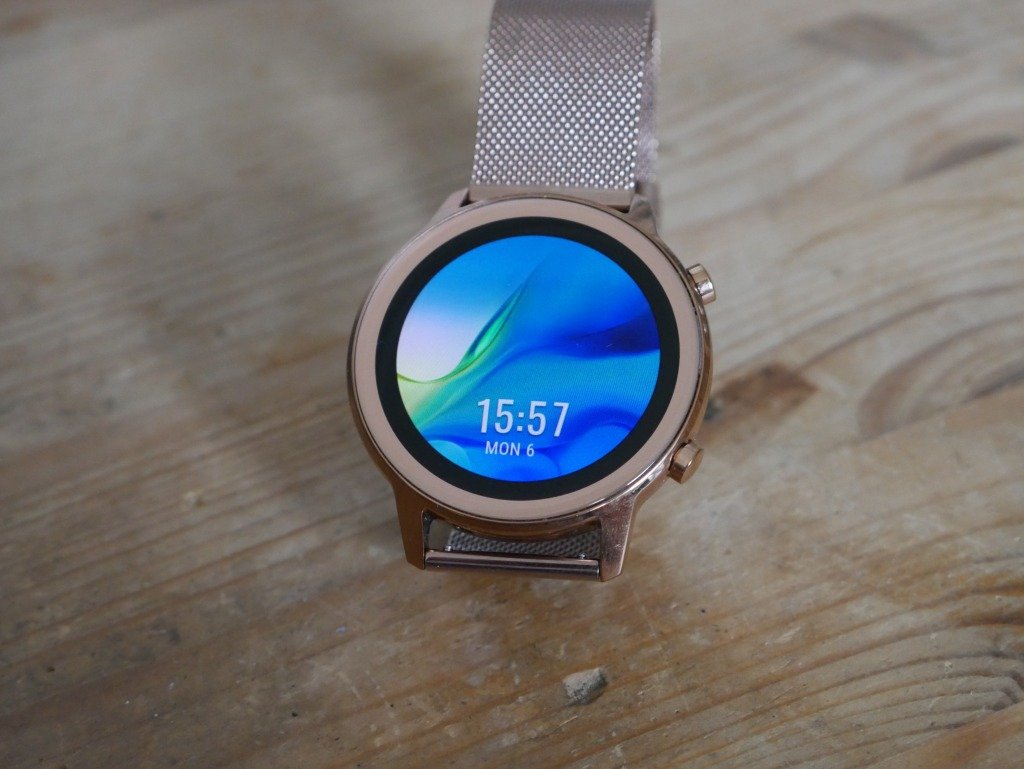 Just like in my Watch GT2 review, I need to state that this can’t really be called a smartwatch, it’s a smart fitness watch. It is a stunning fitness watch but it just so happens can also do some smart features like show you your notifications, sleep tracking etc. and just like with the GT2, notifications are, in my opinion, a little lacking. You get a stack of notifications by swiping up from the bottom, if you click on one, say a twitter notification, it’ll have the twitter icon up top, the twitter users name (not handle) as a header, and then the context of the tweet below. But that’s it, you can’t act on it, you can’t mark as read,  or reply or do anything other than look at it. And on some apps it’s a lot worse, Emails are hit and miss depending on who provides your email, my Gmail accounts are fine but my work IMAP one is iffy, and Whatsapp is a mess, often not formatting properly or just saying he chat name and nothing else.

But despite that less than ideal notification experience, I’ve still been using the watch for this long, because the rest of the experience is so good, swiping around is slick and smooth, opening up apps is fast, setting and enacting workouts is solid and predictable, and it all syncs back to the Huawei Health app on your phone.

For a small walkthrough, the “home screen” is the watch face, by default the watch goes back here because, well, it’s a watch. Swiping from top to bottom shows the quick settings panel, this has shortcuts to settings, alarms, finding your phone, AOD and DND, it also shows date, battery percentage and shows if the watch is still connected to the phone. Swiping up from the bottom opens the notifications which stack in a vertical list. Left and right is actually a carousel, so it doesn’t matter which way you start you’ll end up at the watch face again, but I’ll swipe from right to left. We have heart rate, stress level, weather, music control, fitness rings. Sadly as far as I can there is no way to alter these.

When you press the top button from the watch face you get the app drawer, a vertically scrolling list of the installed applications on the watch including things like Sp02 tracking, sleep tracking, workouts and more. Pressing the same button takes you back to the watch face and pressing the bottom button takes you by default to the workout menu, though in the settings you can change this.

This is one of the reasons I love my current GT2 so much, the battery lasts 2 weeks, and charging for another 2 weeks takes less than an hour. The 42mm variant on the other hand, in order to be smaller in every dimension, has a smaller battery, but still has the same chipset and a high-resolution screen, so the battery life goes down from 14 days to 7 days and man, it’s noticeable. 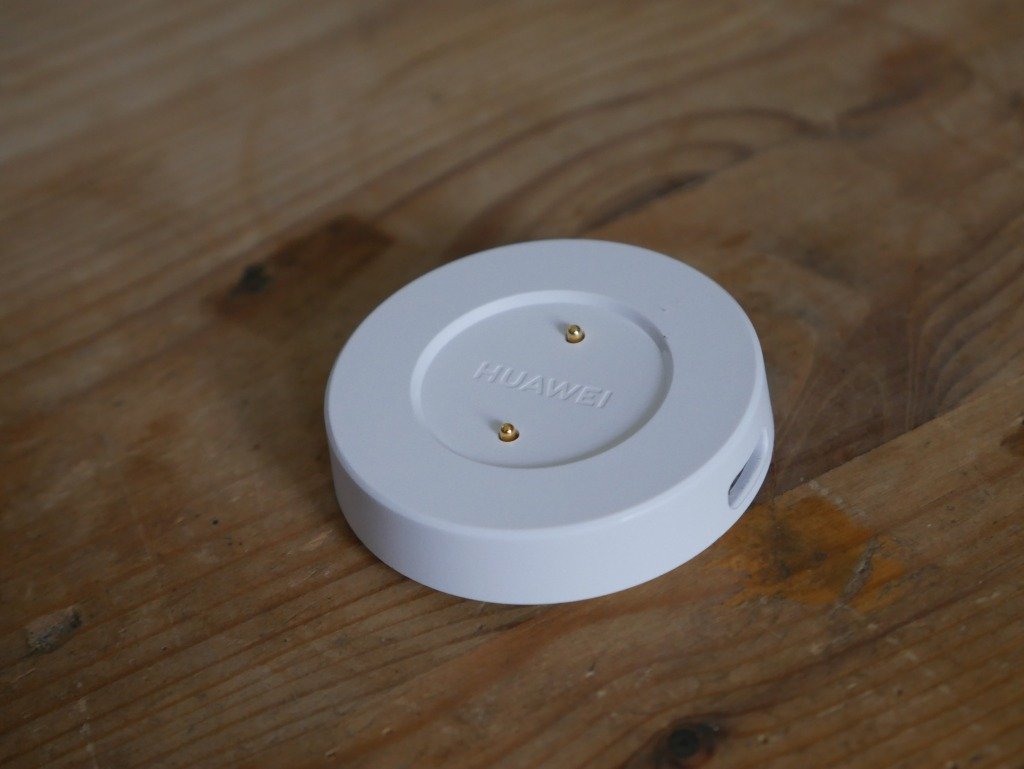 On my GT2 I got comfortable waiting until the watch said about 5% before putting it on to charge, for the 42mm variant once it hit 10% I was feeling antsy. Note this is still better than most other smartwatches where 2 days is a life goal. You can extend the life by turning off the Always-on Display, the sleep tracking and the always-on heart tracking, but those are some of the features that make the MagicWatch 2 so good at being a fitness watch, and even with them all on you still get basically a week of use per charge. 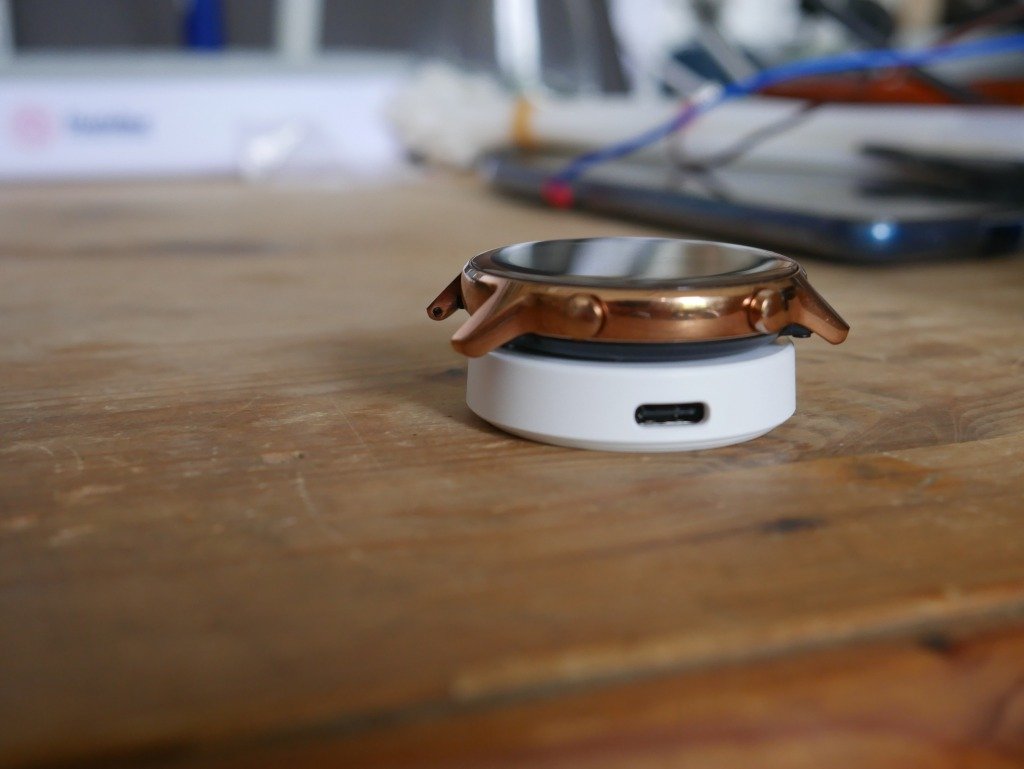 Charging is super simple, you drop it on the magnetic puck and you plug a USB-C cable into the puck, and less than an hour later, it’s done for a week.

So how do I feel about the 42mm Honor MagicWatch 2? I love it, and I honestly think that had I not been given the 46mm at the Mate 30 Pro launch, I would have been happy with this. It’s noticeably smaller, lighter and thinner and is just as fast with great swim tracking, which is important for me. 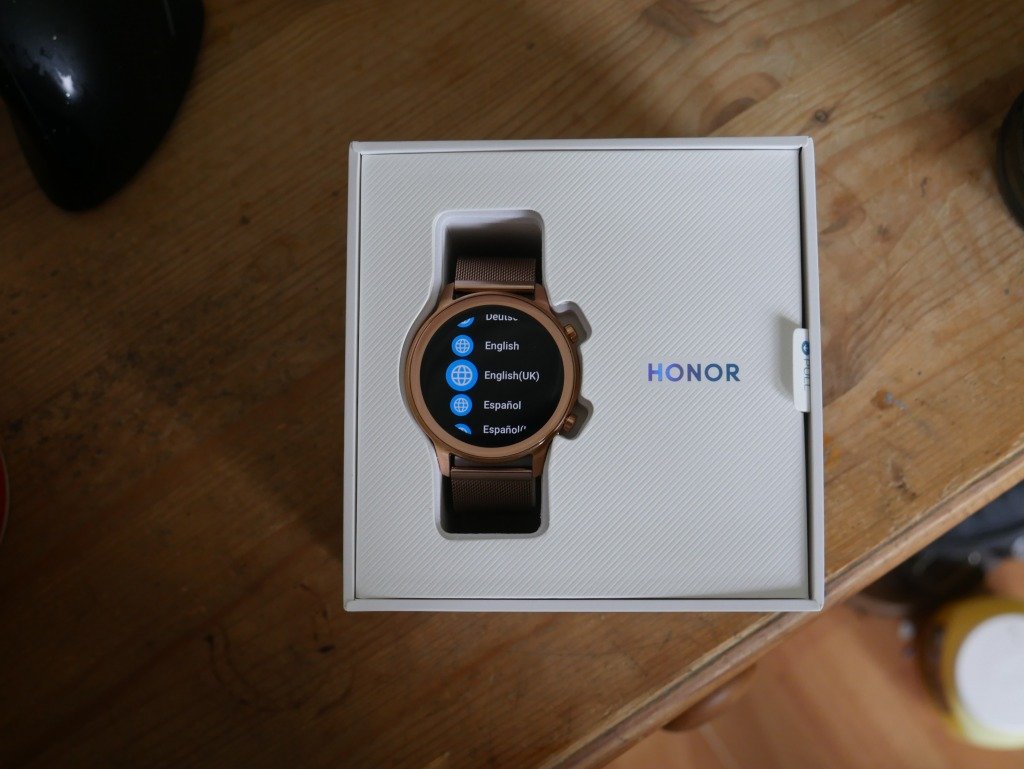 The only downside compared to the 46mm is the halved battery, but even that still leagues ahead of what is doable on most other smartwatches, and they don’t look as nice as this.