When you hear people speak about VR, it’s likely you hear Oculus Rift or HTC Vive shortly thereafter. There are many different levels of VR available for consumers either currently or just around the corner and whilst the Rift and Vive are high-end propositions, there are lower end, wallet-friendly units. The Homido VR Headset is one such unit. The Homido VR Headset is just one in a myriad of attempts to create an engaging VR experience on a budget; something those without the deep pockets required for the higher end units will be very thankful for.

In what is in effect a better designed and upmarket version of Google’s Cardboard, the Homido unit sells for around £47.00 and delivers a plastic construction. Safety (adjustable) head straps are included, for both around and over the head. Additionally Homido include a carry case for the device, a lint free cloth for cleaning, a user guide and 2 extra sets of variably sized lens cone holders to allow near and long sighted individuals to take advantage of the unit. One set of lenses are included as well to fit into those lens cones.

Is the Homido really a step up over the cardboard, and is it value for money? Let’s go through the various elements.

Aesthetically speaking the Homido is a device that people will either love or hate; the all plastic finish is great for keeping the unit lightweight but as it’s matte and not glossy it does look a little cheaper than some alternatives. The included straps on the other hand are welcome and can be used to stabilise the unit on the head. In truth the strap that goes over the top of the head isn’t really required most of the time as the adjustable horizontal one is strong enough to secure the unit. Controls on the side and top of the device control the lens position (from wide to narrow) as well as the focal length which is something Google Cardboard, and indeed other alternative products don’t include. IPD adjustment (Inter-pupillary distance, the distance between the centre of the pupils of the two eyes) is something we believe all VR headsets should have so it’s nice to see it here.

Comfort-wise the unit has some ‘padding’ around the head-piece for comfort. We never used this device for more than 30 minutes at a time as the padding is a very thin, not very compressed piece of foam all around the visor. Not the best, but for short bursts, it’s acceptable. You;d probably expect a bit more from a unit at this price point however.

Once on the head, the unit is effectively powered by slipping a smartphone into the front flap. Homido suggest a device with a screen size of 5″ is optimum although it supports anywhere from 4″ to 5.7″. A resolution of 1080p is also recommended. More compatibility questions can be found on the site’s FAQ. In testing we didn’t have a device that didn’t fit within the flap.

Specifically talking about the design of that flap, we’re a little disappointed. It’s purely plastic which means it holds the devices anchored inside purely with tension. Whilst the flap showed no signs of pressure during our use, we still couldn’t vouch, and wouldn’t like to, for the longevity of that mechanism.

On the whole though, the unit is comfortable, lightweight and perfect for a casual VR user. To setup the Homido unit is relatively straight forward. As the Homido site suggests, download the Homido Center app from the app store of your choice, choose a VR app, install it, slip in your smartphone, and enjoy.

Whilst it’s not quite as easy as that, it’s not far off. There is a fair bit of jiggery-pokery around ensuring that the lens cones are correct and that the distances and focal length are all as they should be, for you. Our suggestion would be to download the Google Cardboard app, and configure it using the QR code below. If you’re unsure how to do that, follow the Homido guide, here. We’d also recommend grabbing the Homido Player to watching some VR video too. There are many VR applications available now to use with the Homido. Some are linear affairs such as 3D movies, whilst others are interactive, dynamic landscapes requiring full head movement to get the best of the experience. The Homido does a decent job of immersing you in both scenarios. The straps keep everything nice and still whilst you whirl around trying to shoot that elusive bad guy.

The VR app scene, whilst there are many, is a little repetitive currently. Due to the nature of the device, which is nothing more than a vechile for your smartphone, consumers are likely to only ever play each game once or twice before moving on. Head on over to the Play Store to find out exactly what’s on offer.

All is well, depending on the smartphone you’re using. Sure, it shouldn’t make much difference, however it goes back to the mechanism by which the unit stows the device powering the apps. The Freefly VR which we had briefly last month used clip mechanism to hold the device in place and then a swinging door to push it onto the visor. The Homido instead uses a tensioned piece of plastic. What that means is that if you have a home button on the front of the device which protrudes (such as ANY Galaxy device) you’re going to have a difficult time here.

We haven’t seen this specifically called out as a negative in too many other articles on the device, but in our testing we never failed to have our game interrupted by a button press. Sometimes when pushing the device into the unit, others whilst mid-game. It was infuriating. When it worked, it was great, however invariably our immersion would be broken by a recent apps trap flipping up in front of our eyes mid game! We get that the plastic lip proposition Homido goes for here helps deliver compatibility with a wider range of devices, but it’s inherently flaw in our opinion.

Assuming you have an extended period of uninterrupted play time in a VR game, you might find some of the functionality a little, well, missing. By default the unit itself comes with no magnetic strip or button to interact with the app directly when in-game. Units such as the Samsung Gear VR do feature such a button. In order to replicate this functionality with the Homido unit, there is an optional Bluetooth controller available from their store priced at around £15. We’d recommend adding this into the price as a VR headset without this level of interaction is really only a half-baked experience. You could make an argument for not needing to get an additional unit for this functionality when you’re forking out nearly £50 for the device, but we can see both sides of the argument. It goes back to our original suggestion that this was simply an upmarket Google Cardboard. With Google Cardboard alternatives such as the Homido saturating the Electronics pages of Amazon, we’d strongly recommend doing some due diligence on other devices before plumping for this one.

It’s not that there is anything hideously wrong with this device, it’s just that for £50 we expected a more complete and well thought out unit; something that would make Google Cardboard owners think about upgrading. Sadly it doesn’t. Whilst build quality and comfort range from good to acceptable and the optical adjustments are an excellent addition, they don’t hide the clear frailties in this offering with the main issue being that smartphone flap – seriously, we’re still annoyed by that!

A solidly built device with some major flaws. Look elsewhere unless you get the additional Bluetooth controller, and have a smartphone with a side-orientated power button. 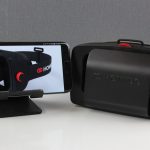