I’ve been a proponent of mechanical keyboards for as long as I can remember. I’ve briefly dabbled with a number of faux mechanical keyboards but nothing quite beats the tactility or the sound of a mechanical keyboard. The Hexgears K520 is a 10-keyless mechanical keyboard available in a number of switch variants depending on how much travel you like on your keys and how much sound you, or the people around you, can endure. If you can get hold of it (at the time of writing the keyboard is unavailable from Amazon or Hexgears’ own store confusingly), there’s much to like about this keyboard, and it serves as a gateway into the wider world of gaming keyboards, at a good price. 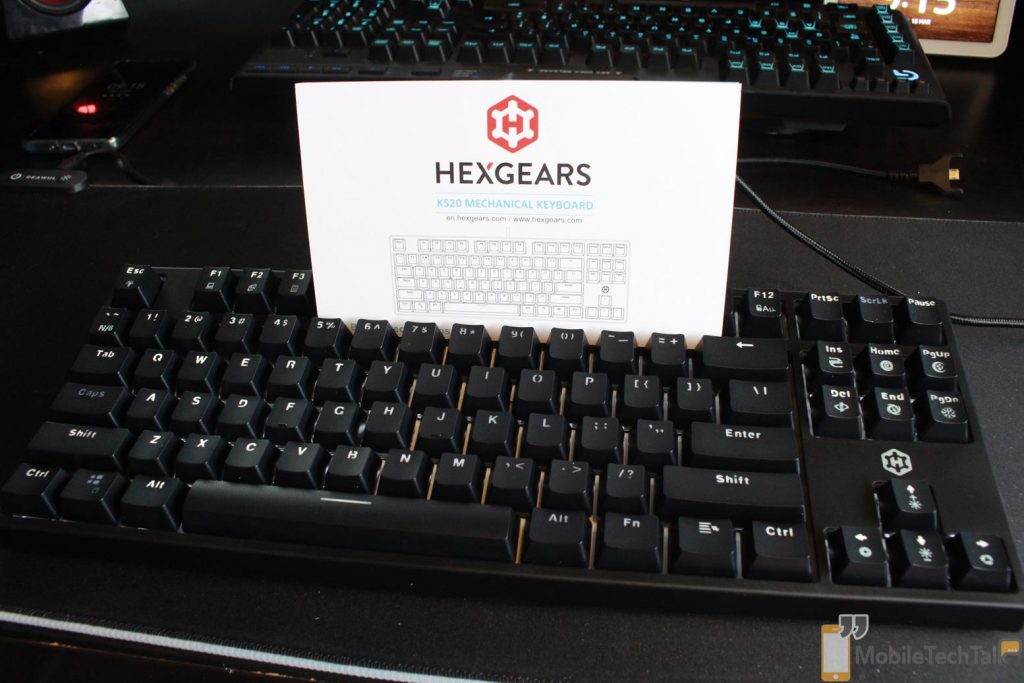 Let’s not beat around the bush, we all know that mechanical keyboards are just better don’t we? They have more tactile feedback on the click, more responsiveness in general, more durability, and a more satisfying typing experience than that which can be found on membrane switch keyboards. Whilst that statement might be subjective to some, anybody who has ever spent long periods of time typing, and/or gaming will no doubt be nodding their heads.

Previously, Cherry produced their MX switches (Blue, Reds, Browns, Blacks, etc) and everyone else looked on in awe. When the Cherry patent ran out, we started to see mechanical switches that used the same process as Cherry MX switches, in keyboards at every price point. Consistently, one of the only other main rivals to Cherry in terms of durability and quality of their switches has been Kailh. Kailh switches have arguably been on par with Cherry for some time, the Hexgears K520 uses a Kailh switch (brown in this case) for their device.

The K520 comes in a standard box, with not much included. The K520 is covered with a plastic cover which you can remove and continue to use as a dust cover if you wish. The cable is unfortunately not detachable but is long enough to be routed neatly underneath desks or around most people’s setup. I’d like to have seen a USB Type-C detachable cable here so that replacements could be purchased or different lengths used, as this could be a good portable keyboard due to its size.

As previously mentioned, this is a 10-keyless design which essentially means that the numpad is not added on to the side of the keyboard. This results in 87 keys being available, and in a standard QWERTY layout.

It’s immediately evident that the price of this particular mechanical keyboard is lower than some that use mechanical Kailh switches. This is mainly due to the plastic design throughout which leads to a bit more deck flex on the board itself than I’d usually like. In fact, my review unit did arrive a little warped and had to be bent back into shape a little. For plastic however, it’s not doing a bad job.

The keyboard is backlit but sadly this is not RGB. The only colour option here is white which is a little disappointing. The lighting only emits from the top-most section of the clear switch which leads to a rather lacklustre lighting effect, albeit there are a few effects to choose from. The top F-key row utilises the FN button to double up on functionality. Shortcuts for File Explorer, Media Player, Browser, media keys and more are all available here. 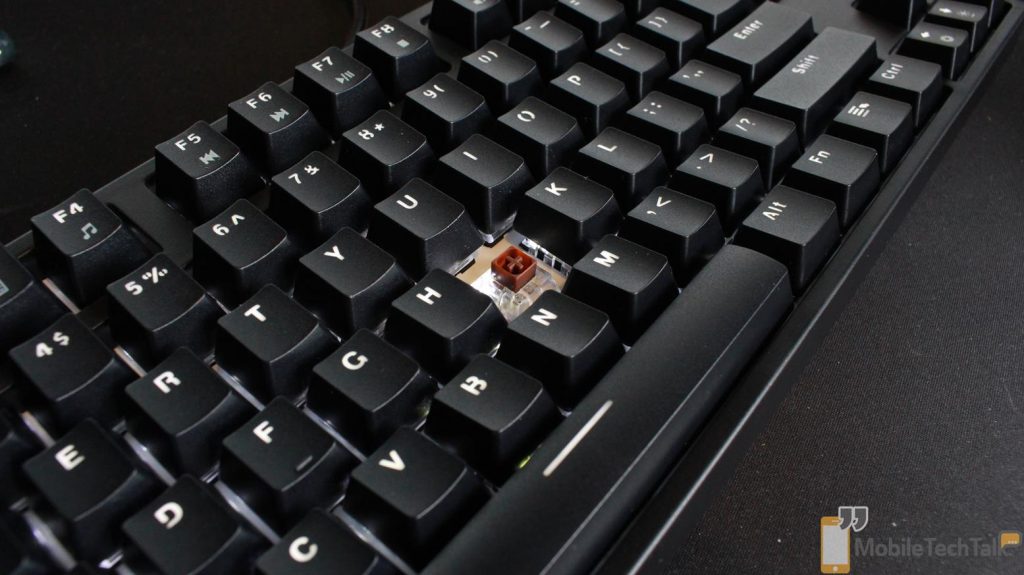 Finally, the keyboard has a couple of rubber feet which can be deployed to stabilise the board, and they do a good job. There are also rubber pads towards the front of the keyboard that aim to stop sliding on flat surfaces in both standard or elevated keyboard operation.

Starting with the typing experience, it’s appropriate that I give a little background as to my use case. Firstly, I am used to using a Logitech G910+ keyboard for my day to day activities. The Romer-G switches included with the G910 are mechanical but they utilise a slightly different tactile feel to usual mechanical keyboards. I choose this primarily for gaming but I’ve since found it very nice to type on throughout the day as my work has taken over.

Switching over to Kailh switches again after a long period of time has been a breath of fresh air frankly. I love my G910 but the feel and sturdiness that these Kailh Brown switches give me when typing is reassuring and I found my words per minute increase significantly after only 10 minutes typing on the K520 keyboard. This was surprising as I’ve had no issues with the G910.

Typing is a joy on the K520, but gaming is also good. Due to the smaller nature of this keyboard than the one I’m used to (which has a full numpad and wrist rest with a much bigger form factor in general) I found I could manoeuvre the keyboard into a slightly diagonal placement much easier than I do with my current keyboard. 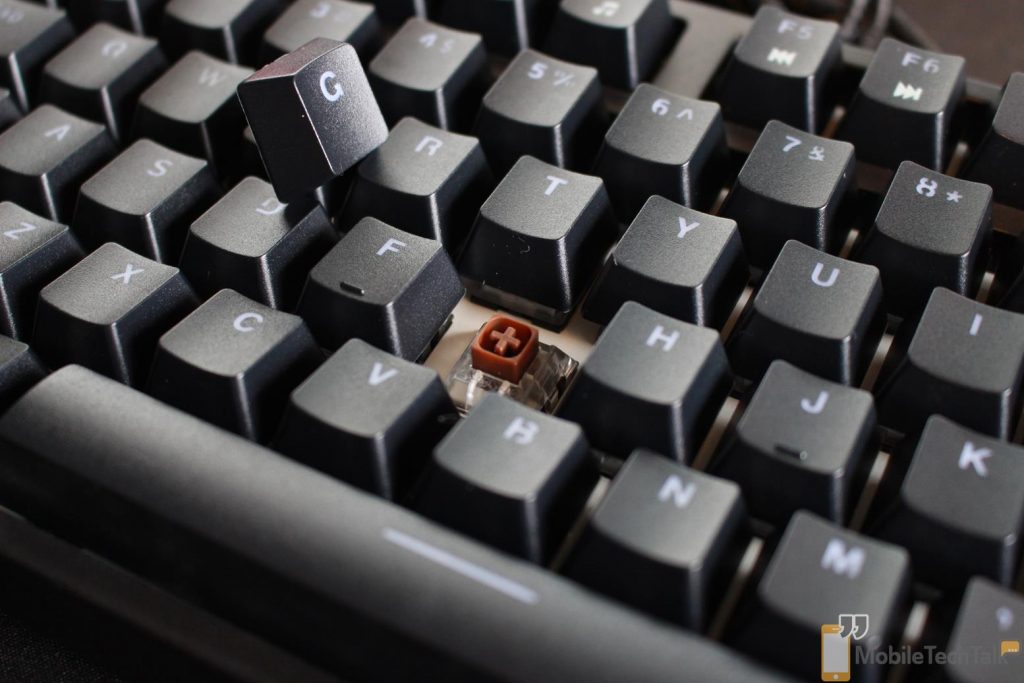 Keys are easily removable for cleaning or replacements if the font, which won’t be to everyone’s taste, is not to yours. Being Brown switches, they require around 45g of actuation force to depress and activate. They feel tactile and responsive which are perfect characteristics for those with productivity inclinations or gamers alike. Brown switches have, for me, long been a nice middle-ground for users. They possess the tactile responsiveness of a Blue switch, but without the clicky noise associated with an actuation. They spring back quickly allowing for speed typing, and they require enough force to actuate that gaming is also a breeze; a good all-rounder.

The keys are obviously more than acceptable, font style aside. The backlighting on the Hexgears K520 are sadly not. Utilising only a white lighting effect, and with only a four-stage brightness toggle from off to brightest, is not the best implementation I’ve ever seen. In pitch black or very low light it is more than enough for users to ensure they are hitting the right keys though. There are a number of lighting modes for the K520 which might make up for this in some users’ eyes. Always-on, breathing, trotting/running, single key fade, and highlighting modes are all available, along with the ability to record certain keys to stay lit. There are also some profiles built-in which highlight WASD for FPS, and QWEP for RTS games, which is a nice touch.

Anti-ghosting is something of a no-brainer for keyboard enthusiasts now, however, it’s nice to see it included at the cheaper end of the market segment here. This feature is particularly helpful for gamers of course who are likely to mash a number of key combinations in a short period of time or all at once.

The Hexgears K520 is generally a solid board at the sub-£50price point. Delivering Kailh Brown switches is, for me, a good start, but the fact that the board is relatively sturdy, has good stability options on the feet and delivers IP56 water and dust-proofing for those occasional spills, elevates this budget keyboard slightly. I’d have no concerns about wrapping this up and taking it with me for writing sessions on my iPad, or for adding to my Laptop for a better gaming experience on the go. If you’re in the market for a 10-keyless design mechanical keyboard, the K520 would fill the void for many.

There are some areas to note, however. If you are specifically looking for a gaming-orientated board to go alongside a custom setup, be aware that the lack of any RGB might hamper you somewhat. Also, the lack of a detachable cable is also a little annoying.

Overall, it’s a strong addition to the mechanical keyboard market. If you’re new to the ever-expanding world of mechanical keyboards, the K520 might act as something of a gateway drug. You can expose yourself to what is good about mechanical keyboards without spending too much and see just what you like, and perhaps look to upgrade in the future to a full keyboard, or perhaps even different switch types. I can honestly see myself using the K520 more regularly. After writing this review on the device and finding it actually easier than on my G910 there is a strong possibility I’ll be using this keyboard for further work going forward.