Let’s be clear here – I’m not spoilt despite what the above might indicate. I’ve been using the Steel Series headset for a few years now and bar 1 RMA under warranty I’ve had no reason to look elsewhere, until now. The padding is starting to wear a bit thin and I was looking for something else to take its place.

The Ghostek Hero isn’t it. That isn’t to say it’s a bad unit, it just isn’t a top-level gaming headset like the Steel Series Siberia v2 was.

The construction is of a relatively lightweight plastic, available with a red or green accents, with leather-esque padding on the ear cups and silicone on the headband. The microphone can be rotated through 120 degrees but can’t pivot or be manipulated any closer to the mouth other than via the vertical movement. That’s actually not too much of an issue and I found that it moved far enough down out of my eyesight to not cause a problem during gaming, and that when stowed full vertically, it wasn’t a hindrance either.

The ear cup padding is acceptable and provides adequate cushioning for medium-term gaming sessions, but nothing more. My ears did sweat a little during use extending beyond 2 hours, but nothing to write home about.

The audio was punchy and low end-centric which isn’t my preferred but it’s certainly not as bad as something like a Razer Kracken Pro where low-end is pretty much all you can hear. I’d again call audio playback acceptable. Microphone audio is also only acceptable thanks to an annoying “hum” that is delivered. It doesn’t come across in all games or in all use cases but regardless of where I plug the unit in and record, I get the same underlying hum. The quality and clarity are actually decent as you can hear below.

The biggest gripe here is the build quality. It’s just not up to much. You can get a Hyper-X product or a Steel Series product for a similar price and get far superior build quality (audio is comparable at some of those price points to be fair). The cups don’t isolate much of the real world so immersion is a little less than ideal with this headset. I’m used to a fully closed cup and perhaps that plays a part in my opinion on this but those that like to block out sound when playing their FPS games will want to look elsewhere, mainly due to the fit of the ear cups. One good thing though is despite the fit, there is little audio bleed so if you’re in a house where you’re living on top of people then sharing a room is going to provide no issues with this headset. The finish on the plastic leading to the silicone padding with leather-esque sheath on top is cheap looking and feeling, and the sheath itself can shift independently.The stitching on the sheath is also already starting to fray after only 10-15 hours of use.

The adjustment mechanism is fine with a far few centimetres of size adjustment being available, however the cups are static and as such their angle doesn’t move in unison to support those adjustments meaning that if you have anything other than a really small or really large head size, the cups sit at a strange angle on your head. I just expect more in 2017 that this.

The control pod is adequate if incredibly bulky, and contains the volume and mute controls. Leading down from that control unit is a nice long braided cable which terminates in dual-3.5mm poles; one for audio and one for microphone. Both are strangely colour coded as blue and red, which differs from the standard. If in doubt though, they both have a little icon on them.

In conclusion, if all you have is £35 and you’re looking for a headset that can deliver decent audio then yes, the Ghostek Hero headset will manage that. However for the same price you can most definitely get a better headset in the fit and finish department, with comparable audio in and out performance too. 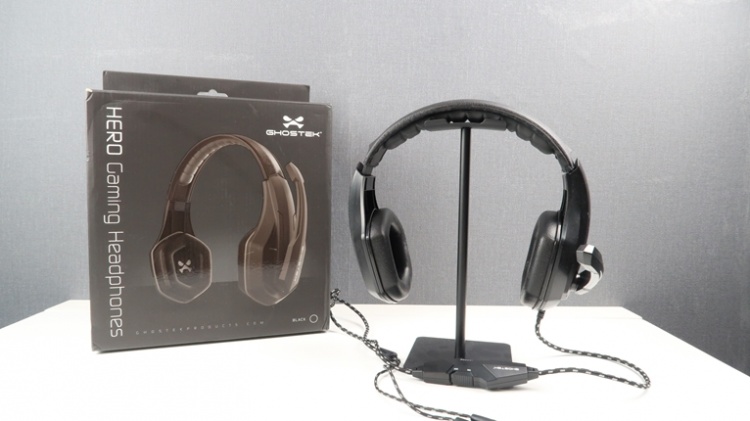