Many are no strangers to technology helping to secure their home via smart doorbells, solar-charged external lights and CCTV. How many actually use smart devices inside the home to provide that added level of intelligence though? It’s not just security either. There are legitimate reasons to look to monitor what is going on inside your home, not least, the monitoring of pets so you can capture their quirky habits and upload them to YouTube of course! The EZVIZ C6T IP Camera has you covered with a small footprint and simple to use features. Let’s take a closer look.

Let’s briefly cover just what this device is as I’m sure that it’s something that’s a little niche to some. The EZVIZ C6T is a network connected camera that can monitor the surrounding area within your home or small office, and not only capture photos and video, but also audit motion with its view and alert devices when motion is detected. For the most part it is a security system, or part thereof, but it can obviously have more than just one use due to the Google Assistant and Amazon Alexa integration. I’ve personally known people to install an IP camera in their home when they have a new born to ensure they can keep an eye on their child. Additionally, those with pets also like to be able to share their sleeping habits with the world it seems – the EZVIZ C6T is multi-function it seems!

IP cameras have been around for quite some time, but with the advent of the IoT (Internet of Things) area, and smart home technology becoming ubiquitous, they have become more prevalent, as well as more compact in size. The EZVIZ C6T is certainly the latter when compared to other, more traditional IP cameras such as the Aukey IP Camera we reviewed previously. The largely spherical design reminds me of a small little Android assistant, or if you’re a little younger, a Poké ball, and the flat base can be used to keep this stable on a flat surface, or doubles as a wall mount for those wanting to mount the device in a harder to reach area within the home. We’re talking just 90 x 100mm in terms of dimensions and just 220g in terms of weight. It’s rather tiny!

There’s a two-tone Panda look to the unit, with the main bulk of the unit housing the camera itself which offers 1080p recording at 15fps, and 720p recording at 30fps from the 4mm lens with a f/2.2 aperture. It has a wide viewing angle (72 degrees horizontally, and 92 degrees diagonally) and can tilt upwards and downward by 80 degrees and 10 degrees respectively, as well as delivering a panning angle of 340 degrees to ensure it can traverse almost the entire room with its gaze.

On the rear of the sphere are the power inlet, a microSD card slot to store more of the recordings and pictures from the device on up to a 128GB card, as well as an Ethernet cable for those wanting to have a wired solution.

As is the case with a lot of smart home technology, setup has been made as intuitive as humanly possible here. Simply fire up your device by powering it on, grab the associated companion application from the iOS App Store or Google Play store, create a user account to register the camera, and use the application to connect to the device and setup the wireless connection. There’s even a handy QR code setup process too. I opted for the Ethernet option which is as plug and play as you can get, and if your router is UPnP compatible, it even sorts that for you too.

Unlike a normal security device, this has a wide panning angle and can be controlled by the companion application. There are other options also alongside the ability to move the camera’s view around the room, such as the 360 picture which will do exactly what it says on the tin and pan around the room taking a picture. There’s also auto tracking which will detect motion and will follow that motion. You can also control whether audio is being recorded which is quite handy for those times you want to monitor but don’t want to snoop on people’s conversations.

The application can be used in conjunction with multiple devices also and a split screen view is included which allows an at-a-glance view of all your devices on the network.

The most interesting aspect, however, is the notifications. Notifications can be toggled and configured for high or low sensitivity, and any movement detected that matches those settings will alert the application and you can jump straight to a live view and see what’s going on. This motion will also be recorded either to local storage via microSD card, or via the optional Cloud storage. More on that later

Finally, I quite like the fact you can tell the device to sleep too, by closing the camera shade. 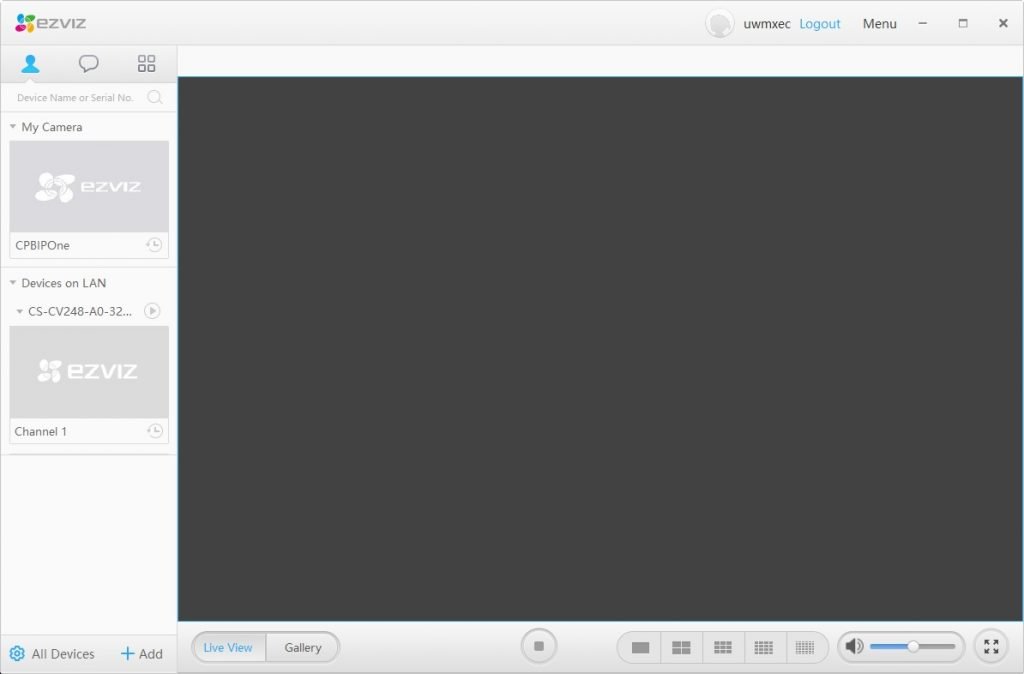 There’s also an application that can be downloaded to Windows PCs to allow the same standard functionality as the app as well. This is particularly useful if you are looking to deploy a number of these devices across a network and security is perhaps your primary concern. You can setup this application and have your own CCTV setup with relative ease without relying on mobile data plans for alerts and notifications.

Once you’re all setup and you want to start recording motion, there are, as previously mentioned, a few different methods. Local storage up to 128GB via microSD card is available, and you’re not likely to fill it up speedily if you’re using 720p resolution. There’s also the option to purchase (after a nice 30 day free trial) the EZVIZ Cloud storage, CloudPlay. The CloudPlay offerings are a little pricey here once your free trial is over with 7 and 30 day rolling retention offerings available at £4.99 and £9.99 per month. There is an annual subscription offering which saves you a little money, but I still think this is a little pricey.

Given the device itself is a sub-£100 offering, I can understand why they are looking to ‘hook’ customers into the Cloud solution. Thankfully though Cloud storage is only optional with the local storage offering evidently proving to be a little more convenient, and wallet-friendly, for most consumers, although it should be noted that not all the features are available to local storage. Just be aware of this when looking at this device, or multiple devices, as a viable home security solution. The CloudPlay subscription is per camera so this could rack up the bill quite quickly. 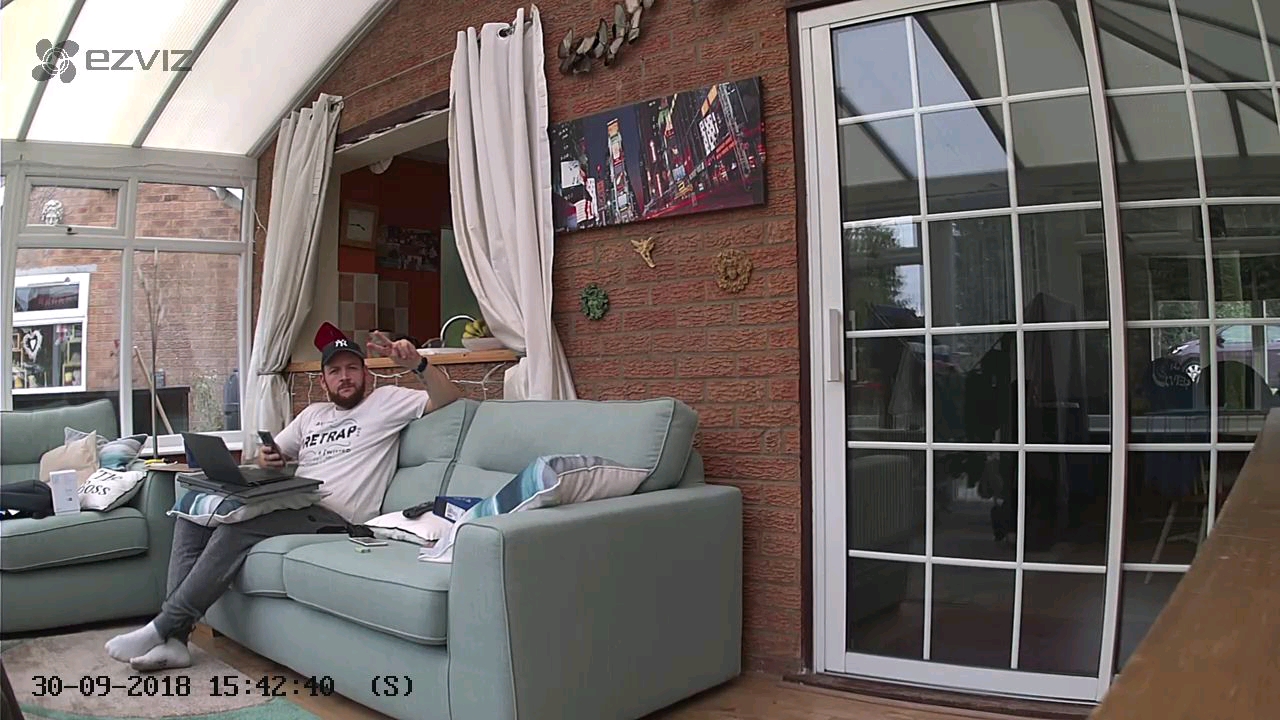 I was actually really impressed with the general picture quality from the device considering the small lens and the diminutive stature of the device. Day shots and recordings are perfectly fine and usable, although please keep in mind we’re talking about a monitoring system here and not a DSLR – there not ‘wall-hanging’ quality. Night shots are equally good with the Infrared kicking in and delivering sufficient detail, although in my testing there was a magic hour just before it starts to get too dark of an evening where the EZVIZ C6T did struggle to deliver the same level of shots.

Tracking works find across all of these conditions also.

In conclusion, I was actually pretty surprised with the functionality in this little device. I’ve experienced IP cameras in the past and they all seemed to have one thing in common; complexity. HEre, the EZVIZ C6T manages a swift setup procedure, some interesting and simple to use features to aid home security as well as delivering in the primary goal of recording imagery that is of a sufficient quality.

Additionally, there’s also Google Assistant and Amazon Alexa skills compatibility. They are limited somewhat and there are a few reports of issues with them, but it’s nice to see this sort of technology looking to link up with other IoT devices in the home.

We’d like to see improvements in a few areas though.

Pricing for the CloudPlay service is a little top-heavy, and perhaps more tiering options would help here. Power over Ethernet devices would be nice as who wants a mess of wires running to something this small. I got lucky and managed to hide quite a lot of them, but your average consumer just wants to plug this in with minimal fuss and be on their way.

There’s also a limited 10 degree downward pan which limits greatly where this can be positioned to get the full effect. I found putting it on a window ledge or something similar where a downward view is less of an issue (see images above) the best solution, but in a non-review scenario, that is going to cause issues. We’ve all seen CCTV cameras sitting in the corner or a wall up high. You’ll just have to get creative with the mounting to achieve the full effect.

Finally, the notifications could be improved to deliver non-native app alerts, perhaps via email or SMS, however, these are usually the staple of higher tier models.

At a relatively low RRP though, the EZVIZ C6T is actually a really nice device and one I plan on continuing to use it, albeit in a more suitable area to complement the rest of my security provision.