I’m not sure how I feel about the marketing that promotes “Senior” features, but I’m very sure that the idea of a more simplistic smartphone without the bells and whistles, is a good idea for newcomers or the non-tech-savvy amongst the population. The Emporia Smart 5 looks to address what is a rather niche demographic.

Emporia SMART 5
+ FOR
- AGAINST

Emporia provided the SMART 5 free of charge in exchange for a full and fair review of the product. Emporia has had no input as to the final published article and no money has exchanged hands. The Emporia SMART 5 was reviewed over a three week period.

First of all, I want to talk a little about the branding in place here. The emporiaSMART.5 isn’t the most eye-friendly name, especially when aimed at the more mature audience, but that aside, everything else about their strategy is. In the press information that came along with this review unit, Emporia waste no time in outlining their strategy:

These devices have been designed to meet the needs of our ageing population and are targeted specifically at the older consumer aged 65+.

We’ve seen devices before that are targetted at the visually impaired, for example, as well as devices that were thinly-veiled attempts at pointing to the more mature market, but never one that has been so candid in their approach. I suppose I can applaud that. 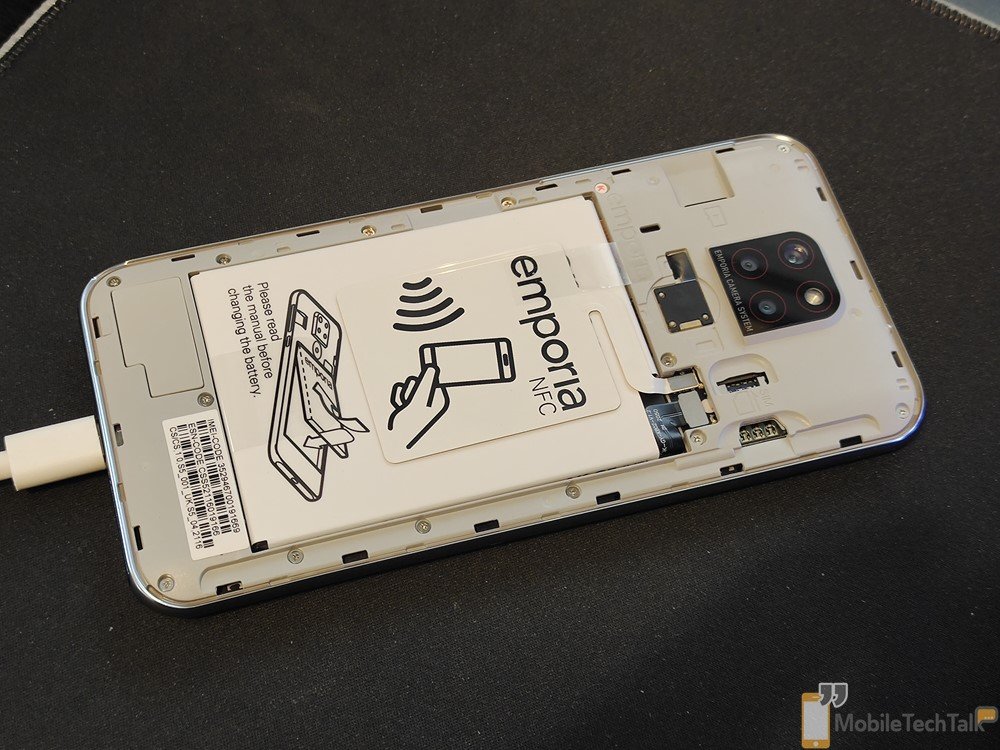 The Emporia SMART 5 is a relatively normal-looking budget Android smartphone from Emporia. Emporia were unknown to me before they reached out. They are based in the UK, launched in 1991, and specialise in devices for individuals with specific needs; the elderly, visually impaired, and those that feel a little confused by the technology on offer. They’ve already got a portfolio of devices ranging from standard Candybar devices to flip phones and beyond.

Picking up the Emporia SMART 5, there’s a speaker grille at the top of the screen as well as a selfie camera and a notification LED. At the bottom of the front side sits recent apps and back virtual buttons, flanking a physical rectangular home button. Just like the good old days! 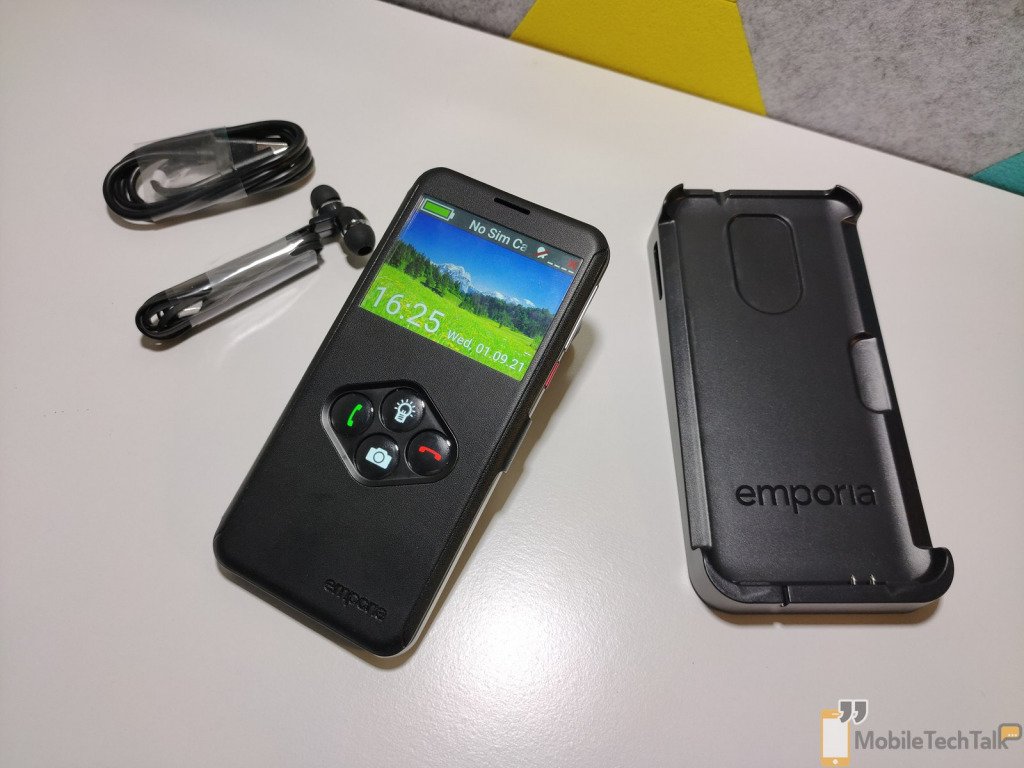 On the back-side of the SMART 5, there’s a lovely brushed, textured case that makes gripping the device easier, along with the camera array. The array comprises of three cameras and an LED flash. This back-side case can be removed to reveal the battery as well as a SIM card slot and SD Card slot. The battery is removable here too.

There’s a massive, and I do mean massive, product manual. 135 pages of features, how-to guides, FAQs and more are included in what is a throwback to consumer electronic purchases of the ’90s. Nobody reads manuals anymore, do they? Well, Emporia believe that some people do, and those people are going to be of a certain generation; the one that their product is marketed to. I got bored quickly, but as a reference, it’s incredibly detailed.

Picking the Emporia SMART 5 you’d be forgiven for expecting something a little more out of the ordinary. That’s exactly what the SMART 5 looks like; ordinary. In this particular instance, that’s a good thing. Given the target market for Emporia, bling, flashing lights and meticulously coordinated colour schemes are not necessarily as important. It is very nice to hold though. Very light, but the grippy texture of the back-side gives it a decent in-hand feel.

It is immediately evident that the screen is not particularly extraordinary (there’s that word again). It’s not overly bright but it’s adequate. The 720p resolution will be energy-sipping on the 3550 mAh battery too. 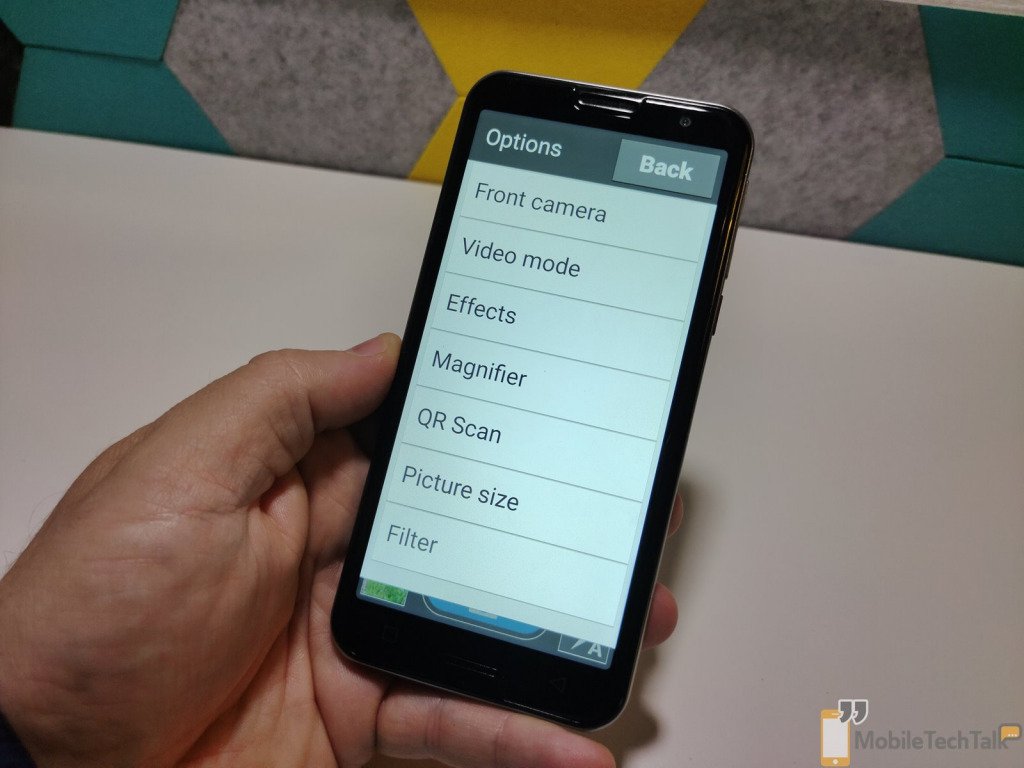 With Android 10 in tow, you can use this device as a standard Android smartphone, however upon first boot users will be asked to register and defaults the home screen to the emporia skin. This skin is what the device is all about. It creates a simplistic user interface that allows access to the main applications, such as Phone, contacts, messaging, camera, etc, with a single touch. Moving back to a standard Android desktop is as easy as going into the settings and choosing a different Home application.

It is a responsive enough device for most people. There are a few lags that I think are driven by the QuickStep default home application. Sticking another launcher on the device alleviated this. I’m not expecting the target demographic to be able to do this, so it’s worth noting that upon first use, there can be a little bit of a delay. The storage in tow could also account for this. 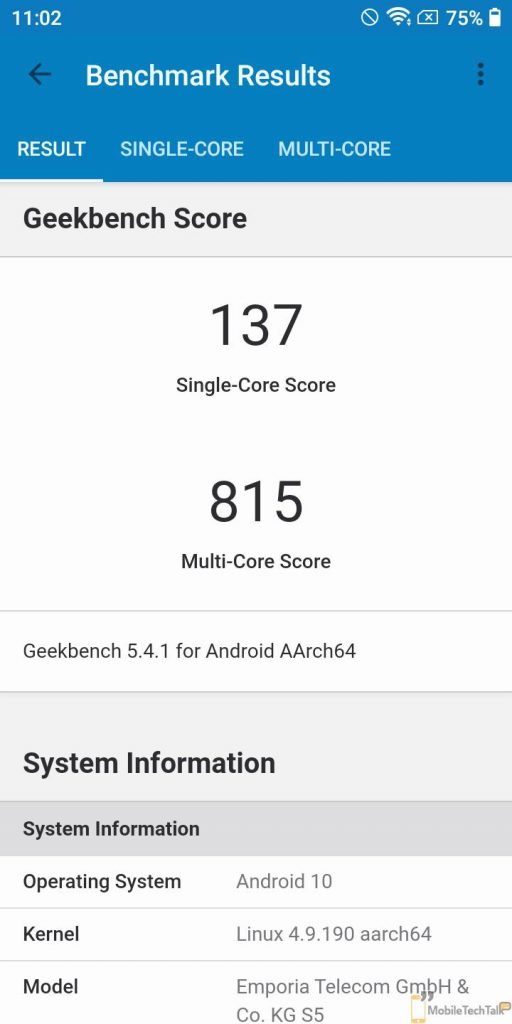 One other feature of note here is the included IP54 rating which is great for offering some protection against dust and water ingress. Again, given the demographic this is aimed at, a little oopsy protection is a great addition. 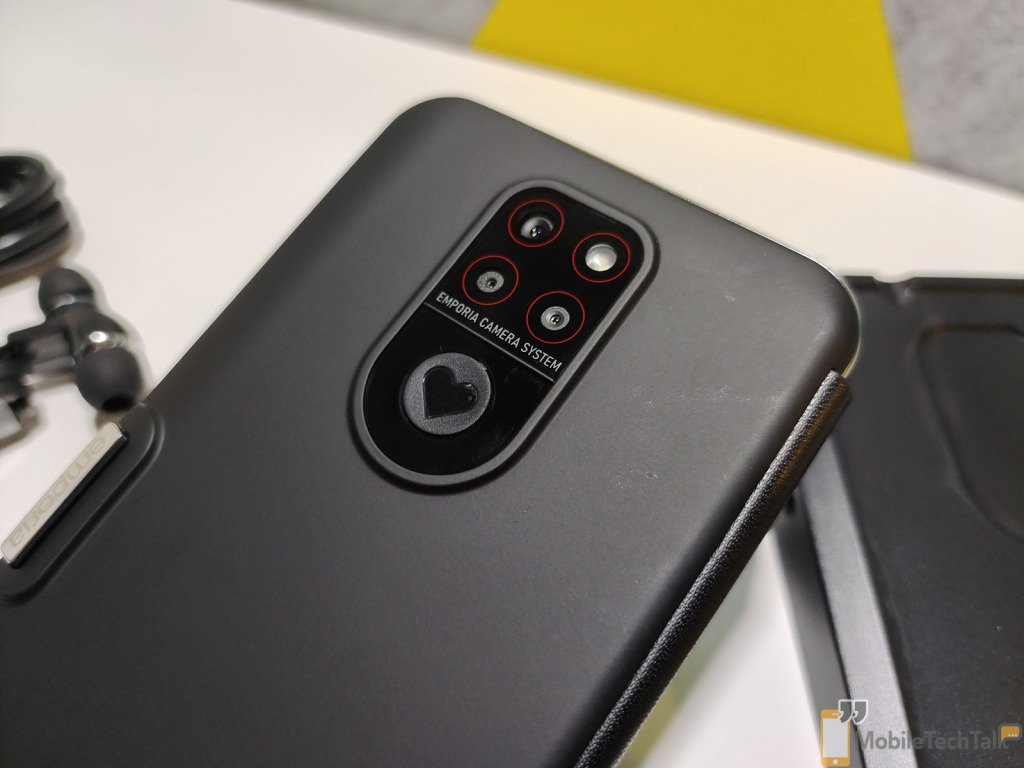 The camera on the Emporia SMART 5 is not all that. Of the three cameras on offer, the 13MP is the main camera and will be the go-to camera for most scenarios. It’s absolutely fine in good light. Decent colour reproduction, crisp enough, and colours look acceptable for the demographic. The Macro and Depth cameras, however, as they do on most flagship phones to be fair, leave a lot to be desired.

Looking at a couple of samples from above, you can see that the camera tends to lean into the colours making it difficult to see the nuances in the object. Red hues are notoriously difficult to capture on smartphone cameras and the Emporia SMART 5 does nothing to upset that trend. IT does have a quick shutter though so you won’t miss many shots even if they aren’t the sharpest. 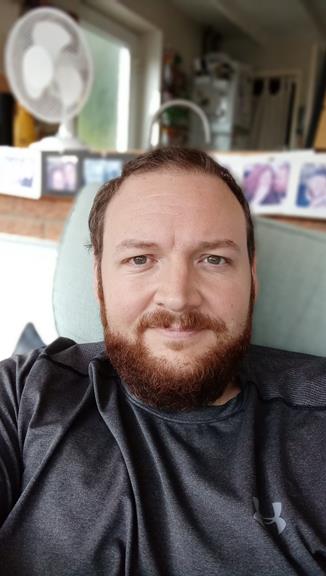 Selfies are a little rough around the edges with the faux-bokeh effect interfering with the clarity of the subject as well as grain being prominent. Again, it’s okay for social media use.

The video is passable too. Topping out at 1080p on both the front and rear cameras, they both blow out whites and reds, and the dynamic range isn’t the best. Again though, for the price and for social media use and occasional pictures/videos, it’s probably absolutely fine. You can touch up the pictures in Snapseed or something similar relatively easily, to hide any grain. And the video is going to be compressed to hell when uploading anyway. I doubt the consumers that purchase this phone are going to be too unhappy. 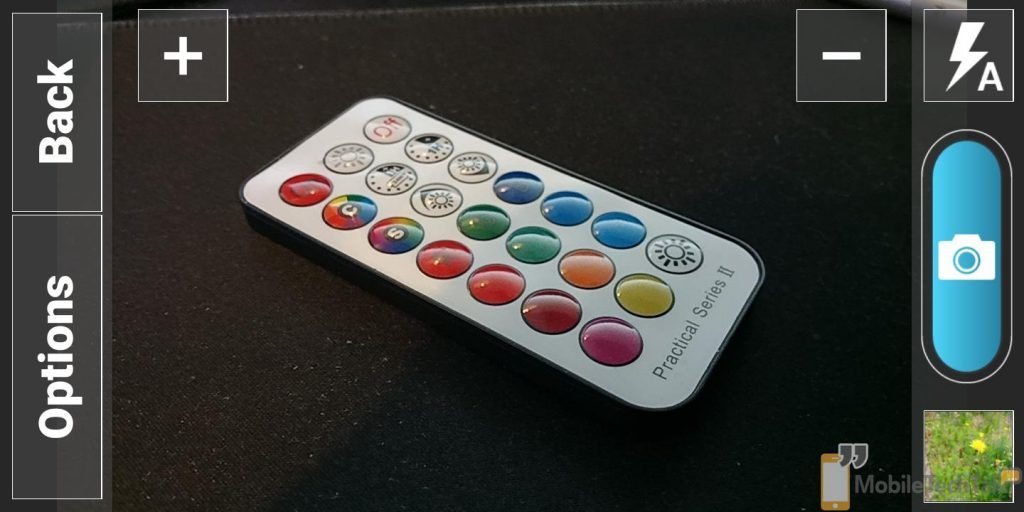 The user interface is a little more clunky than elsewhere on the phone. Whilst the Emporia skin is pervasive and works almost everywhere, the large buttons feel clunky here. They don’t reorient when rotating which is a pain, and they cover the entire screen with no transparency when selecting anything but point and shoot modes. There are large ‘+’ and ‘-‘ buttons to handle the zooming too. I’d have much prefered to see a little intro wizard as well as perhaps an ever-present help button to give callouts. The camera is the busiest and most configurable stock application in the Android arsenal; even with a 135-page manual, some help during use would have been handier.

The software is really the unique selling point of this otherwise standard budget smartphone. the skin, simply labelled ’emporia’, pulls the old Android “Simple Mode” trick and divides the home screens into several easy-to-touch, easy-to-see, tiles. By default, there are phone, mail, picture and notification buttons on the main home screen. Pressing and holding will allow the user to create a link to a different application. Swiping to the left shows contact favourites and emergency and voicemail quick dial tiles. Swiping to the far right shows more standard applications such as alarm, camera, calendar, and so on, as well as an all apps button.

Along with the user interface changes, there are some other little changes too. There’s a special keyboard that has larger buttons and coded positive and negative buttons which switch between Go/Stop, Next/Delete, etc depending on the situation. I found this easy to type on but the enter/send button is replaced with a big delete button which was jarring. It would be for me; I’m used to smartphones. I had to keep re-enforcing that during this review. I’m not the intended user. 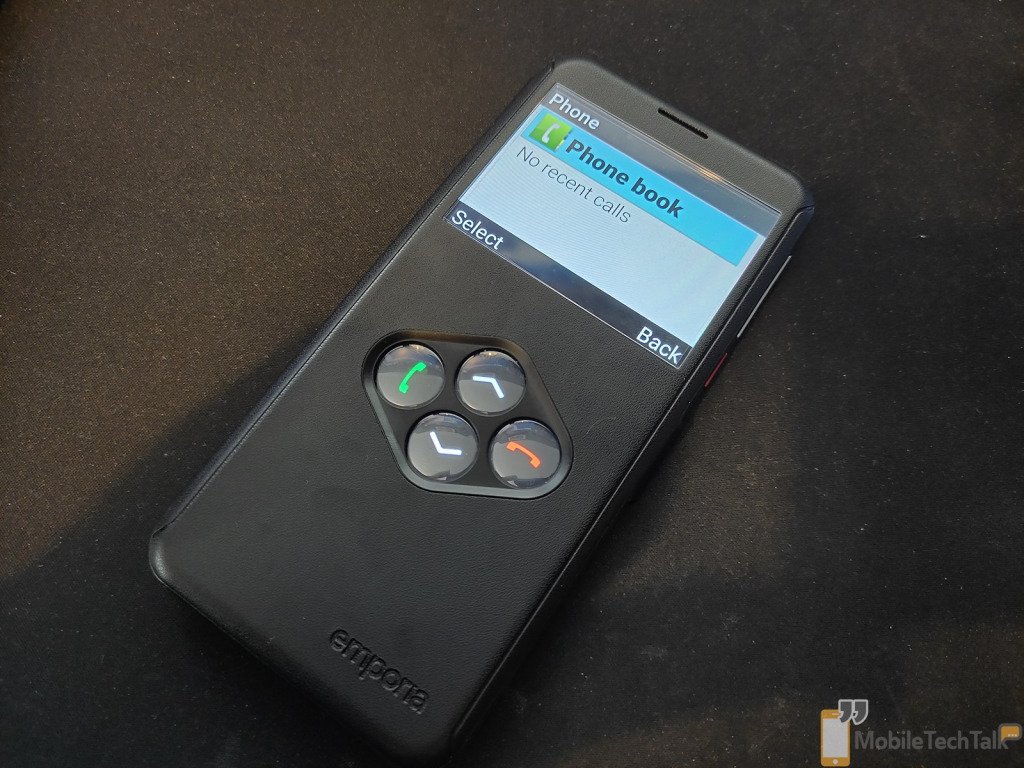 By far the most interesting software inclusions are visible when using the included SMARTCOVER. Simply attached the SMARTCOVER case and the phone screen becomes smaller to be seen through the cover, and the 4 buttons on the front change function depending on the selection. You can launch the phone book and scroll contacts and call them all without opening the case. Likewise, the camera can be opened, as well as allowing the ability to turn on the torch. It shows a level of thought has gone into the accessories bundled with the SMART 5. Rather than simply providing additional protection over and above the IP54 dust/splash resistance, there is additional utility here.

The 3550mAh battery is sipped throughout the use of the Emporia SMART 5. Under normal circumstances, we’d be looking at this battery size and thinking that it’s not really 2021 standard. A few mitigating circumstances arise here though; this is a budget smartphone with an energy-efficient Helio P22 CPU, and we’re probably talking about generally light use.

In my testing, I managed to get 3 days with light to medium use. I tried to replicate what I think “light” usage is; a bit of social media, a few YouTube videos, but text messages phone calls and a few photos being taken daily. 3 days is more than adequate I think. If you struggle with that, there is always the option of buying a spare battery. Yes, in a dramatic return, removable batteries are back! Well, perhaps only in a few niche use cases, but I love to see it!

When you do need to charge the device, you can put it on the included charging pad (again another throwback) or plug it directly into the wall charger with the Type-C USB cable. It’s not lightning-fast charging but fast enough for a quick top-up or overnight fill up.

The Emporia SMART 5 is an interesting device, from an interesting company. It’s true to say that I, as a 41-year old, feels a little distant from the cutting edge of technology from time to time. It stands to reason that the older generations might feel a little overwhelmed by the amount of technology that has become ubiquitous in the last 10-15 years.

The implementation here is similar to the old Android Simple Mode option to make the user interface less cluttered, but it does add some interesting additions, especially when using the included SMARTCOVER.

It certainly is no speed demon, it won’t cause even optical packages from 2 or 3 years ago to look anything but superior, but it does have a package that some would find useful; a gateway into the world of smartphones. At less than £250 unlocked, I think that, in and of itself, is a compelling offering. 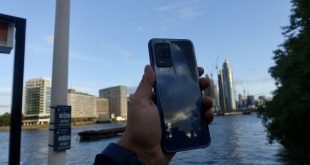