dodocool are a company that have only recently come onto our radar here at MobileTechTalk. As with many similar companies, their product list consists of Bluetooth peripherals, budget headphones and chargers. I took a look at the dodocool DA104 Bluetooth headphones over a two-week period and they even managed to get used at a gym! That’s New Years’ fault, but how did they hold up? Let’s take a look. Before I go any further we’re going to tell you the price right up front. We don’t do that often but I think that the entire review needs to be prefaced with their cost, and that kept in mind the entire time. The dodocool DA104 Bluetooth headphones are currently for sale at Amazon UK for just £14.99. Let that sink in at the end of the review. For starters, dodocool include quite a few accessories out of the box, with a funky stylised microUSB cable, replacement silicone buds, and a nylon carry case. It’s always nice to have a number of tips to choose from and as I’ve mentioned previously my ears are seemingly different to a lot of others as I need to chop and change to find a comfortable fit, so it’s a thumbs up from me on that score.

The dodocool units themselves are manufactured largely out of plastic with only the buds and the neck-band being of another material. They have subtle dodocool branding on each ear piece, with the left call out the NFC connectivity for pairing. On the right ear piece is the multi-function button which controls the power on/off functions as well as the pairing mode and the answering or rejecting of incoming calls. The right ear piece also houses the remaining volume up and down buttons which double as track forward and repeat. All buttons function as expected with the + and – buttons being easily accessible during use, but the multi-function is a little harder to locate. After a short period muscle memory kicks in though. Once I’d put the required tips on (I trumped for the large and guessed correctly) I set about getting it on my head for the first time. The dodocool DA104 headphones are made to fit around the back of the neck, come up behind and then over the ear and pin the buds into your ear canal. Off the head, pulling the two ear pieces apart and letting go sees them spring back just like a rubber band, so at first the rubberised band that connects the two ear pieces contributed to a particularly pressurised feel when I finally got them in place. They are quite taut. It’s a double-edged sword though, and I learned to live with it. After a short period of adjustment, I came to be thankful for the tight fit as, in the gym for example, they just don’t move and they pin to your ears to keep the noise in. This is where selecting the correct bud size is imperative on this unit to ensure comfort.

The audio benefits from the fit, and delivers quite a normalised sound stage which manifests as a good all round unit for fitness or sports use. the mids and highs are as clear as the lows, with the lows delivering more than enough bass to be acceptable for either some rumbling rock, or bouncing Hip-Hop beats. They get plenty loud as well without distortion, so be sure to set a lower volume before you fit these as the tight fit extenuates the volume.

Call quality isn’t quite as good as other similarly priced units, but again,. it’s acceptable. I received two separate calls whilst in the gym and the callers said they could hear me but the background noise was also very noticeable. For my part, I could hear them without issue. As good as you’d need, and perhaps expect.

I didn’t spend long enough in the gym to fully test the IPX4 splash resistance, but sweat certainly caused no issues. I also didn’t spend enough time in the gym to wear down the 130 mAh battery on my first visit, but over the course of a week, I managed to kill them. It took around the 7 hour mark which is somewhat short of dodocool’s 10 hour playback claim, but for my use case this was still more than acceptable. Given that they took me just 90mins to recharge also means as long as I remember, I can charge these up more than enough for an hour gym session in 20mins.

The final aspect to report is the connectivity. Cheap units all seem to suffer from poor Bluetooth connectivity, and despite v4.1 being used here, the connectivity issue is still a problem. Being just 3 feet (up to 1m) from the unit caused no issues at all, however any more than this then I’d occasionally get some stuttering and loss of sound intermittently. Putting the phone the headphones were connected to in a jeans pocket seemed to exacerbate this despite the very narrow gap between them both. It seems my body mass or my jeans cause significant connectivity issues. Again, in my use case, I had no issues with this as I kept my device near, but it’s something to be aware of.

The NFC is a nice touch too. Not that pairing these units is hard but to be able to just hold your phone over the NFC unit and pair them, well it’s a nice trick, usually reserved for the higher priced units.

Going back to my first point, at £14.99 I’d go so far as to say that these are some of the best headphones, for fitness or sports, that I’ve tested for this money. Their design is a little bland and understated which some will find a turn off, and the pressured fit takes an hour or so to get used to, but the audio performance is on point and the battery is acceptable. You also get some accessories with the dodocool DA104’s too. If you’re after a pair of Bluetooth headphones for the gym or for running, and you don’t want to have to worry if they are stolen or get broken, then the dodocool DA104 have to be an option for you.

The good folks over at dodocool have provided a discount code for our readers only here at MTT. For a limited time (30th Jan) you can pick up these headphones for £13.99 with the following code. Given that this is already discount from £21.99 we’re thankful they could provide any discount. Every little helps! 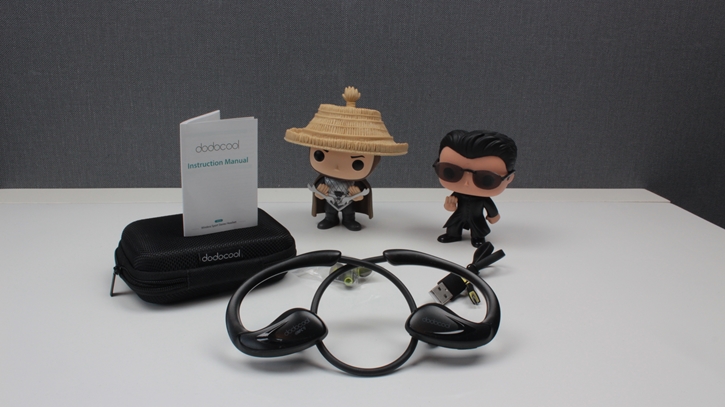