About a month ago Touchjet reached out to see if we’d like to look at their Touchjet Pond. This is a compact projector which runs a build of Android and looks to replace interactive whiteboards and other touch sensitive mediums. Of course we jumped at the chance. This is our full review of the Touchjet Pond – an Android pocket projector.

Touchjet are a company with offices in both the US and Singapore, who focus on delivering alternative ways for us to interact with technology for the advancement of learning and educational use cases. Essentially, Touchjet utilised Indiegogo to crowd-fund their first project, the Touchjet Pond (formerly named TouchPico) which offered backers a tiny handheld projector that turned any surface into an Android tablet of up to 80″. Not only did it get funded, it enticed over 3500 backers and $900,000 dollars.

Let’s just clarify what this device is. We’ve all seen projectors before. Large ceiling mounted ones of varying resolutions are common place in both business and educational establishments now. However these are largely static devices simply transferring input from another device to a larger viewing medium. The Touchjet Pond however takes things to another level. It is, itself, a smart device with Android 4.4.2 Kit-Kat running atop a Dual-core 1.66Ghz Cortex A9 chip with 1GB RAM. However, it’s much more. The integrated WVGA optics deliver an 854 x 480 resolution display which is entirely interactive thanks to the included bluetooth Airmouse remote and the bluetooth stylus. Using the stylus on whatever surface you’re projecting on to is as similar as using a stylus with any other phone….except you’re using it with a projector!

The device itself is currently retailing for £599.99 from their EU site.

Take a look at our unboxing and first look video here. In summary, the following comes in the box:

As previously mentioned in the overview, the Touchjet Pond is a handheld device. Weighing in at 273g it is noticeably heavier than your standard smartphone, but not an awful lot bigger. It’s thick at over 3cm, but only it is comfortable to hold. Not that you’ll be holding this device much. It’s meant for portability, and it’s weight and dimensions, not to mention the lovely carrying case, allow this. However it’s also meant to be moved from one static location to another. So don’t go holding this thing like a camcorder – that’ll get you nowhere.

The devices sports a Dual-core Cortex A9 chip with 1GB RAM which proved ample for our testing. We didn’t push it too hard, but a little bit of “Angry Birds” and some YouTube were handled with no surprises in the performance department. Coming with only 4GB of internal storage seemed a little irksome at first but an additional 16GB of storage is delivered by way of an integrated SD card.

Audio on this little thing is also included, albeit you won’t be shaking any rooms with the included mono speaker. We’d have liked to have seen stereo speakers on this given the price.

Elsewhere, the specifications start to wander from smartphone territory with a 4,000 mAh battery included which can run for around 2 hours in ECO Mode, and an RGB LED projector lamp rated at 20,000 hours with a lens delivering 1000:1 contrast ratio which is in line with similar full sized projectors delivering the same resolution natively. In terms of brightness this projector can deliver up to 80 lumens in AC mode, falling back to 50 lumens in battery mode. Whilst not the brightest by any means, it’s more than acceptable in dipped light situations. One slight disappointment was that whilst the battery did indeed give around 2 hours of continuous use, there was no way to force the appliance out of ECO mode to up the brightness at the expense of battery life.

Finally, we’re on to connectivity. This device delivers a mini HDMI port, microUSB 3.5mm audio out as well as a power adapter port.

Setting up the device was simple. Turning the device on skipped through a Touchjet boot animation and delivered a familiar Android setup screen. Prompted to add all the relevant Android details, as well as configuring the included styli for touch input were all seamless and anybody who has used Android before would be right at home here.

The Android build is slightly quirky. The tablet-oriented skin houses no app drawer and instead adds all applications to the home screen. This might be one time when this actually makes sense however. This devices’ sole reason for being is to ensure ease of input and interaction. Having all apps at the users’ fingertips immediately seems a sensible choice.

That interaction will be largely governed by the included Airmouse remote and one of the two Styli included. The Stylus first of all is quite a beautiful little device on its own. With batteries inserted its hefty but not uncomfortable to hold and the power button on the shaft is easily toggled. Once powered on, any touch input registered by the tapping of the tip on the projected surface, is accompanied by a red LED illumination on the tip. The tip itself can sometimes feel a bit mushy as it actually moves upon pressing, but it’s easily overcome during a little use and becomes familiar in no time.

Using the Airmouse is an even better experience, albeit a completely different one. The Stylus encourages interaction with the Android interface directly, with swipes, taps and movement of the stylus to generate a reaction. It feels more akin to using an interactive whiteboard in a classroom, than using an Android tablet. The Airmouse however transforms that experience to one very much aligned to an Android TV box of some sort. Using the bluetooth remote, typing out URLs is easy, and scrolling the app list is simplicity itself. Furthermore, using the “mouse mode” button on the remote overlays the UI with a mouse to enable even easier interaction. We prefer this method by far, but again, like with so much on this device, it depends on the use case and the immediate scenario.

The user interface , being Android, is friendly, simple, and as previously mentioned, we think it was a good idea not to hide the applications behind a drawer for the purposes of this device. There’s not really much to say here on the Android side. It’s a very slightly skinned version of Android 4.4.2 Kit-Kat but without an app drawer. That’s about that.

The software drivers covering the included Airmouse and Stylii function flawlessly and we had little issue navigating with the additional controllers.

There really isn’t much more to say on the software side; apologies for repeating ourselves here but it’s Android, with a bit of a skin. The fact the software doesn’t get in the way of the experience is excellent. It’s like a great football referee; it goes unnoticed for the most part.

Using this device has just been fun. fun, fun. Whether you’re mounting it on a tripod for a bit of “Netflix & chill” time, or like us, putting it on the side of your desk and have it running some YouTube videos whilst working, you’re going to find some interesting use cases for the Touchjet Pond.

There is no doubting that this device does indeed suffer from a bit of an identity crisis. It has many use cases, but the majority of them appear to be niche for the common consumer. This is not aimed at the common consumer market however. If you’re after a pocket-sized projector there are many alternatives out there that will give you a greater viewing experience, at a reduced cost. The Acer S1 LED projector is one notable option for example.

However if you want a bit of versatility, a decent viewing experience, and think you’d be using it in the kids’ bedroom one night, and then downstairs at Christmas to show off your pictures the next, then the Touchjet Pond is not only a good option, it’s a cool option.

Yes it’s pricey at £599.99, but again, this will attract those wishing for versatility that isn’t as easily available in other devices. These same consumers won’t be unhappy with their decision, as long as they’ve purchased this product on the merits of its individual niche use cases, and not on the “projector” tag alone.

A good start from Touchjet, and they currently have another innovative product green lit following a successful Indiegogo campaign. Take a look and drop us a comment on whetehr these products interest you? 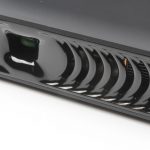