Wrong. What Toshiba graciously sent me was the Toshiba Canvio AeroMobile Wireless SSD. Whilst I had not heard of this product specifically, I had taken note of the category it was in. Take a hard drive, and give it its own hotspot capability, but instead of connecting to the outside internet, the devices that connect to the Wi-Fi this broadcasts get access to what is ever on the device. A neat concept.

But is it only neat in concept? No as it turns out, it’s actually a pretty useful piece of kit, though in my experience is a pretty small niche where it fits in, it definitely fits in. First we have the box, and the contents. It comes in a relatively small box, though mine came slightly damaged I wasn’t deterred. Opening up the box greeted me with a clear plastic tomb for the device and it’s accessories with only the documentation outside. Opening up the 2 parts of plastic we are greeted with the Wireless SSD itself, a black velour carrying bag, a short black USB3.0 to USB3.0 MicroUSB cable, a wall adaptor with interchangeable heads. In my box I got a 3-pin UK plug and a dual pin European plug.

We’ll start with Hardware. There isn’t a lot of it. It’s a small silver rectangle, similar in size to the 1st generation Moto G. On the front there is a Toshiba logo embossed at the bottom and 3 LED indicator lights at the top. The far left is for the battery status, the central light is for the wireless signal and the far right is for when you have an SD card inserted. Speaking of SD cards, the right side houses only the SD card slot (yes is does click in to be flush but for photographic purposes I left it half out). The left hand side holds nothing, as is the same with the bottom of the device. The top of the device houses the power button on the right, the reset pin-hole in the centre and the micro USB 3.0 port on the furthest left. Oh and yes it’s an ugly connector but in a device that’s sole purpose is transferring data, I want it as fast as possible. On the back we have a sticker that houses some important information such as the MAC address etc.

I was having a hard time thinking of why I’d use this product. I could use it as a USB hard drive for my media collection at home, but at 128GB it’s smaller than even the smallest 500GB USB hard drive I have. It’s an SSD so it’d be faster than the other. Fast enough for me to take the hit in capacity thought? For the use it has, which is sitting under a TV plugged into a raspberry Pi, the answer to that question is no. At the same time with its USB3.0 connection, sure it’s very fast, but again, with what it’d have to do plugged into my media centre, it’s wasted potential, so I started looking elsewhere and I found it.

We, that being my family and I, were going up to London to see relatives and a use case right then and there jumped into my head. How can I shut them up and keep them occupied? Films! So before we left off, I plugged the USB HDD from my media centre back into my PC, along with the Toshiba Canvio AeroMobile, and pulled across a couple of films I thought they’d like to watch and set off downloading the Wireless SSD app for their respective phones (an iPhone 5c and a 1st generation Moto G). Before we set off, I asked them to give me their phones so I could sign them into the Wi-Fi (this is where a little conversation about Wi-Fi not being “the internet” went on for a bit) and gave them their phones back, told them to plug their headphones in and pick a film.

It was a magical trip. They had both shut up, were watching films of their choice and did I mention they were silent? It was lovely! On the trip back something interesting happened though. They both wanted to watch the same film. I had just assumed that they wouldn’t be able to. That the file would be in use on the one device and they’d have to watch separate films, or at the very least, the two films would be linked.

I was wrong. Not only could they watch the same film, they could watch it at separate point. It was 2 completely separate instances and I couldn’t believe it. I downloaded the app on my phone, connected to the Wi-Fi from the HDD and tried watching the same film, a third instance, a third, completely separate instance. This for some reason was blowing my mind, but this was probably the best thing that could have happened for transport in my family.

So I came home, loaded up the 4 phones that were currently on my desk at the time (a 5.5” Idol 3, a 3rd Generation Moto G, a 1st Generation Moto G, and a Kazam Tornado 348) and went through the same process. I loaded up the apps, logged into the Wi-Fi, clicked on the same film and scanned to separate points in the video. They stuttered a bit, but after a few seconds they were all running smooth. Then the sheen grew slightly less shiny. I don’t travel all that much, and then it became clear to me, I have little use for this product now that I’m not travelling. Well when I’m on the trains for whatever reasons, I usually have mobile signal, so I can watch films on Netflix or stream music from Google Play. If I’m at home I have my computer, my laptop and more importantly, my Wi-Fi and I run back into the problems I had earlier; this device has less capacity than the HDD’s I store my films on, and for the use case I have, the speed increases are negligible.

Does this make this a bad product? Not in the slightest. It’s actually pretty amazing. The problem in this case is me. I don’t travel much. I don’t want to share all of my things with friends or family and unless I am travelling this product could just sit on my desk, which makes me sad. I’m sure some people would have great uses for this product, unfortunately I’m just not that person but I can say, when I was in that target demographic for this product on that trip, I got it. It made sense to me. Since then,when I’ve not been travelling, I’ve not felt a need to take it out of my bag or take it off my desk.

Toshiba has a winner on its hands if you’re in the market for a wireless SSD. You can throw it in a bag , and I quite literally mean throw. It’s an SSD; its solid state. There is no need to worry about magnetic platters and heads scratching anything and even better the battery is rated for about 8 hours. Whilst I haven’t had a chance to test it in one sitting that long I can say that when I forced myself to use it, it lasted me a few days, which again, was very impressive to me for a device of its size.

Would I buy the Toshiba Canvio AeroMobile? No. Not because it’s a bad product though. It’s slightly expensive. I found the 128GB version on Amazon for £120. That’s almost £1 per gigabyte, which, when SSD’s are going down into the 40p per/GB and even 30p per/GB range, £1 p/GB is a bit hard to swallow. However price isn’t what’s keeping me from buying one, it’s because I’m the wrong type of consumer. If I travelled weekly, was a very open person and wanted to share everything with everyone then yes, I’d buy it. However if I bought this, I’d be using it as a USB SSD which I can get 128gb SSDs for less than this because I won’t be paying for the Wi-Fi functionality I wont use.

For more information about on pricing and availability of the Toshiba Canvio AeroMobile Wireless SSD, check out the product on Amazon.

UPDATE: The price has just dropped on this bad boy – check it out now on Amazon for just £106.00 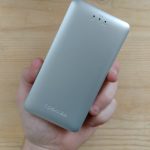