Have you ever wanted a normal LED light that plugs into your wall? Perhaps you have. How about one with Bluetooth? Getting more interesting. How about a standard E26 LED bulb with Bluetooth that plays music via 2 JBL speakers? Yes…yes…yes! That’s what I thought, and the Sengled Pulse Solo offers the lot.

What is a Sengled bulb?

Sengled’s Pulse Solo is a standard LED bulb with the common E26 fitting, whilst other fittings are available. The bulb is screwed or pushed into usual bulb sockets as normal, with the distinct advantage of Bluetooth connectivity allowing controlling of the light, as well as the integrated JBL speakers so you can play audio through the bulb at the same time as providing light to your living space. The Pulse Solo differs from it’s larger siblings by being aimed at the desk or bedside lamp as opposed to an overhead dining room/living room bulb.

What is the point?

Is “because we can” a good enough answer? Seriously though there are many apartments and flats where space is at a premium. This might well suit those with a small living space that don’t require too much in the way of music playback ability. As with a lot of smart and IOT devices these days there really isn’t another point. I’m sure that many reading this would quite happily turn on their “normal” bulb, and use one of a number of cheap Bluetooth speakers to blast their music playlists just as well. To each their own, but Sengled can deliver both based on their claims.

Is it any good?

The Sengled Pulse Solo boasts two high quality 3 watt JBL speakers for top notch audio. I disagree. In testing it became obvious that the £20-£35 Bluetooth speakers I own sound much better than this. The audio has no depth and there is simply no low end and no treble. It really does sound like a bad, old radio trying to play music- it’s not good at all. Perhaps we have to bear in mind here that this is a bulb, but when you put speakers in a bulb, you have to want them to be heard and used, and these just don’t cut the mustard.

Sadly the Pulse Solo is not an RGB bulb and cannot change colour, only brightness (using the App). The lack of any mood lighting, even for this smaller “solo” option product is disappointing. I have LifX bulbs. These provide many more features that the Sengled bulb. Heck, I have an NFC tag that I can program to turn on the LifXs and play my music, which is easier, and more satisfying than using this. The bulb gets bright enough for its intended use (remember; nightstand, desk lamp), and aesthetically it’s not too bad. The shortcomings are not easy to overlook however and the fact that brightness can only be controlled with an app (dimmer switches will not work with this device) is not an issue for us, but could be for some. Speaking of the companion app, it is, unfortunately, terrible. It just doesn’t work! It is supposed to control the music – it fails to do so. There is actually no point of the app other than to change the brightness, and to take up your device’s precious storage. Unfortunately, the changing of brightness, via a percentage by the way, again, doesn’t work. It would be great to control the brightness, and the specifications clearly call this out, alas you cannot, or more accurately I couldn’t during testing.

The bulb doesn’t get hot which is a Godsend. It gets warm and it takes a while to get to that point which you’d expect from an LED device. This is great news! While using the bulb I have found that it takes at least a couple hours before the bulb will start to get too warm. If touched it will not burn your hand, but you will definitely feel that it is hotter than usual. Those who are particularly safety conscious should have no worries on this score.

At the end of the day if you want a light for your bedside or your desk to stream podcasts or an Audio Book for example, then this works fine. For for RRP of £49.99 however you had better have a pretty unique use case to justify the purchase. In my opinion you’d be better off getting an £60 LifX bulb that does more and is much better. It would even work fine for small periods of listening. As a long term option though, I have to say that I am not impressed or won over by this product and it has a way to go before it’s troubling the big players in this space. 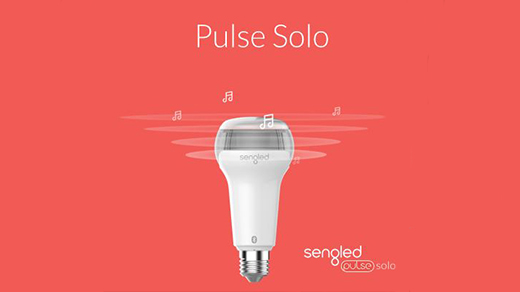 High-School student in Essex, England, UK. Enjoys all things new and techy, especially Google, Android, Chromebook, etc; and a little bit of iOS. When not being drowned in tech, or on social media, he enjoys swimming and running.
@connor_jewiss