Mobile battery packs are everywhere. That’s not an exaggeration. Lipstick sized through to big ol’ bricks all capable of powering the latest mobile technology are available from just about any tech outlet. What’s different about the Tylt Energi 5K+ battery pack……it’s packing lightning! Let’s take a look. If you’ve every looked for mobile device peripherals we’re pretty sure you’d have heard of Tylt. Tylt has been around since 2011 and it’s mission statement is simple; innovation. Tylt pride themselves on delivering high quality mobile technology and peripherals with a blend of form and function that looks to one-up the competition. There are many compelling Tylt products on their store portal, some of which we’ll be reviewing here on the site. Tylt don’t seem to just make products for the sake of it. Their design is clean and clever, and their quality has always seemed top-notch.

The Tylt Energi 5K+ comes in typical Tylt packaging with a bright red box surround and see-through plastic covering. Call outs of the main features are dotted across the box and a semi-prominent call out designating this device was specifically made for iPod/iPhone devices is found on the front. We’ll get to that.

In the packaging you can expect:

On one edge of the rectangular design is a solitary power on button, whilst on the opposing edge houses a USB output port as well as a Micro USB input port for charging the device itself. On the top and bottom edges is where the included and attached Micro USB cable and that unique selling point, the Lightning cable, reside. The device is available in Red, Grey and Blue highlighted designs and the rest of the device is coated in a semi-glossy black plastic.

The power button has an LED strip embedded to allow, at the touch of the button, a coloured representation of the charge remaining in the included 5200 mAh battery. Green, amber and Red solid lighting indicates battery charge of 100%-70%, 70%-31% and 30%-3% respectively. A blinking Red LED indicates less than 2% of the battery charge is available and the device should be charged as soon as possible. I personally prefer this method of indicating remaining charge than many other battery packs that rely on a number of lit LEDs.

With a very slim profile this device is eminently portable. At just 14mm deep this doesn’t feel all that different from the smartphones it will be charging, in hand and in a pocket. Its width and height dimensions are extremely similar to flagship devices in 2015, most notably the Samsung Galaxy S6, at 70mm x 142mm. At just over 160g it’s also relatively lightweight.

The Tylt Energi 5K+ differs from its predecessor, the Energi 5K, in its included Lightning cable alone. Otherwise operation is identical

One of the most compelling parts of this unboxing process however was the realisation that the device itself comes pre-charged and ready for use straight out of the box with a full charge. That saves some time and is something other manufacturers have latched on to.

The Tylt Energi 5K+ battery pack boasts the ability to deliver up to 2 full charges. Presumably this is based on “average” mobile device battery sizes. If you have a particularly big battery in your smartphone, such as a Galaxy Note 4, expect just shy of 2 full charges. A Samsung Galaxy 6 however is a prime candidate to reach its claims however.

In our testing, each method of charging via Micro USB gave a 1Amp output and charged the devices relatively slowly, regardless of the device attached. This is in keeping with the 3A output current called out in the literature however we’d have expected that the ampere to be shared across the port load. Sadly this isn’t the case. Each charging port/cable outputs just 1A which will leave you twiddling your thumbs waiting for your tablet to finish recharging. In an age when Fast Charging is becoming more and more mainstream, the Tylt Energi 5K+ will flatter to deceive in its charging time. However, in our device charging tests we managed to fully charge a Samsung Galaxy S6 twice, giving credence to the 5200 mAh battery’s load.

Charging the Tlyt Energi 5K+ battery pack itself is noted to take around 6 hours. During our testing it took slightly longer than this at around 6.5 hours to fully charge.

As mentioned at the beginning of this review, there are many battery packs available for mobile devices and the unique selling point of this device was the licensing of the use of a built-in Lightning cable. Lightning ports are available in the iPhone 5 onwards, iPad 4th generation and iPad Mini amongst others. Many users will be able to take advantage of this port via this external battery pack, however many more will no doubt be utilising Micro USB charging by default. This device, utilising both, is relatively unique and is an interesting combination.

Then there is the price. Currently the device is on sale in Amazon at just a little over £48, down from £69.99. The price is almost entirely down to the design and the license required to deliver the Lightning cable. Removing the marketing hype, a 5200 mAh external battery with 3 charging ports for close to £50 is not exactly inspiring.

From a company, in Tylt, that pride themselves on delivering quality products, it disappointing to see that this product is so easily overshadowed by others in its market segment. The Anker Astro E7 for example boasts a 25600 mAh capacity, with 3 ports for charging and intelligent power output to deliver the fastest possible charging. This product is £49.99. The comparison is telling.

If form over function is your bag, then there might still be space in your tech bag for this device. It’s not that the device is specifically bad; it delivers what is aspires to. Its key features are bettered in almost all instances by alternatives in the growing mobile device charging space, with other manufacturers providing larger capacity, faster charging devices at a similar price point. 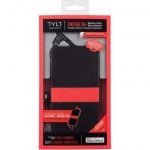