If you’ve been around a while or follow me on social media you know that I ride a motorcycle, not just as hobby but as my main form of transport. You’ll also know that about a year ago I picked up and reviewed the SJCAM SJ4000 WiFi. If you read that review then you’ll know that I highly rated the camera, and that I have been using it ever since. When asked if I wanted to review the Tec.Bean 4K I snapped it out of their hands. At £50 I wanted to see how good the 4K footage was. 4K in this form factor and at this price would make it a steal, right?

Before I begin I would like to thank the folks over at Tec.Bean for sending me a unit to review. However, they have not had any input into this review whatsoever.

As usual I’ll start by listing the specs for those who want them.

The packing is ridiculously simple. Opening the box reveals two smaller boxes. In the left box you’ll find the camera in its waterproof case with a mount on the bottom. In the right box you’ll find all of the accessories. All in all you get:

Like the SJCAM, you get a lot for you money. One battery will be in the camera and the other in the accessories box.

When it comes to using the camera it is similarly simple to use. To turn it on, hold the power button located at the front. To start and stop recording you simply hit the button on the top of the camera. Pressing the power button will cycle you through the different menus (video, stills, gallery, settings). Then using the up and down buttons will cycle through shots taken, during which hitting the top button will play and pause playback. Simple, you’d have to agree.

When it comes to using the WiFi functionality it is again very intuitive. Whilst on the video preview, hold the up button on the side and it’ll turn on. Connect to the network on your phone/tablet and open the app (found on Google Play and App Store) and connect to the camera. Ensure your mobile data is turned off otherwise it won’t connect to the camera.

As for the App, when opening you are greeted with a preview from the camera as well as some basic controls. You can access the files on the SD card as well as adjust the settings. The app does exactly as what you would expect it to; it just works. I’ve been using it on my OnePlus 3 running Android 7.1.1 with no issues. Do note however using the camera whilst using the WiFi will reduce the battery life significantly.

Tec.Bean claims that you can get around 88 minutes of footage from each battery. This is a myth. Not a chance. From home to college is a 30 minute journeyeach way. So, in theory I should be able to go to college and come back from college to home. However, I was finding that it was dying at around halfway on my ride back. So at a push it was lasting 45 minutes therefore in this department it doesn’t quite match up with what they claim which is disappointing.

With 4K being the main focus here I’ll start there. In short it is well below the line of the usable, that’s just in the day time. It does however do a little better at dusk. Looking at the footage it appears to be upscaled 1080P footage which is certainly not a setting that I would ever recommend using and something we see all too often in this category of “4K” cameras. However in it’s defence the 30FPS is a true 30FPS.

Switching gears to 1080P is sort of a similar experience. Though it is better than the 4K it still washes out the colours and again it’s still not great. Strangely at dusk it looks slightly better but that dusk could be hiding some of the more subtle grain perhaps? At night, well, don’t waste your time.

Rounding everything off, the Tec.Bean 4K action camera is a hard one to recommend. The image colour being off, the wrongly advertised battery life, and the misleading “4K” features, ultimately mean that you could spend an extra £10 and get the SJCAM SJ4000 WiFi which has been my daily camera for this use case for the past year and is far superior. It’s not a terrible product but it isn’t good by any stretch of the imagination either. For the quality of the image it seems overpriced. If they discount by 50% then perhaps it’s worth it in a pinch? 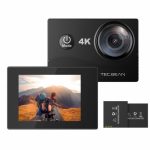