Yeah you read that right. What I have here is a light for your bike. This is legit, as technology doesn’t get much more “mobile” than the Ecooe Bicycle Headlight and we’re reviewing it right now.

Chris I hear you say – this has nothing to do with phones or headphones or laptops so why the hell are you reviewing it? Well the answer is simple really. Many people are or have taken up cycling and as we are coming out of the winter months, it now means that it gets dark much later and cyclists will still be out and about. I would like to thank Ecooe for sending me this out to review.

Being seen on the road is important – that goes without saying. If you follow me on social media you’ll know that I ride a motorcycle and I have done for about a year now and the one thing I have always worn is a high visibility jacket simply to ensure that drivers of other vehicles and pedestrians can see me. Now because my bikes were road legal they obviously has lights fitted to them – but push bikes don’t as standard which is where this product steps in.

Yes there are cheaper options out on the market. Heck you could go into Poundland and pick a front and rear set for £1 but after doing so myself a couple of times I noticed that they are £1 for a reason. and they don’t last for very long.

Cracking open the box (which has a simple design and it does look very nice) you get everything you need. You get:

The charger you get is an EU not a UK one so you’ll have to use an adapter plug (EU to UK) and you can pick these up from virtually anywhere at a relative low cost, though an actual UK power adapter would have been nice.

So moving on to the light unit itself. A cool feature is that to mount the light you just clip one of the rubber bands to one of the hooks, put the unit on a handle bar then pull the band and pop it on to the other hook. No tools required. The cable is quite long too and is designed to be wrapped around a bike frame so that the battery pack can go around the saddle. It’s a simple but effective design. Ecooe recommend keeping the battery back under saddle since it is not waterproof, which is a little short sighted perhaps.

On the top of the unit you’ll find a button. When plugged into the battery pack it turns green so that you know when power is going to the unit. Pressing it will result in switching between the 5 modes.

A single LED is what delivers the light source and damn it’s bright. Even on the lowest setting the light is still pretty bright and in my opinion suitable for riding around town. Having options for a higher brightness level is pretty great too especially if you are on dark roads. When in the flashing mode and S.O.S mode it seems to be on either medium or high brightness. I’m not sure which, though I suspect it’s medium which makes the light blinding for road users travelling toward the light. Thisd would/should only be used in an emergency situation however. One thing I cannot stand is bikes on the road with lights that are flashing. Not only is this distracting for other road users but it’s not it’s intended use.

I’m saying if you have a light with a solid emitting setting please use that and not a flashing mode. Thank you!

So we know how to mount it, how bright it is and how to use it responsibly. How does it perform on the road? I don’t actually own a push bike so I strapped it onto my motorbikes handle bars instead and headed of to some private land and switched on my bikes light and tried it out.

WOW!! As said earlier the brightness of the LED is powerful and riding around town would be suitable on the lowest setting whilst riding on rural roads it would be appropriate on either the lowest or medium setting.

So to conclude. Yes the LED is very bright, gives great visibility and has a simple mounting system. It is let down by the fact that the battery pack is not waterproof and it doesn’t seem to come with an UK power supply which was a little perplexing. At a price of just £19.99 however, cyclist have never had less of an excuse to get kitted up for their night time jaunt! 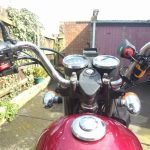