If you have been here for a while you’ll have noticed that I receive a fair amount of deliveries from EasyAcc and overall I’m pretty pleased with what I get. Besides the occasionally little things overall 9 times out of 10 I am very satisfied. The PB4,000CB is no exception.

In the box you get the power bank itself and an instruction manual. Pretty basic but you don’t need much as it has an integrated cable.

Contents of the box.

With a 4,000mAh internal battery it has a slim design coming in at 134x69x10mm even with the included integrated cable. While kind of. The USB cable connects to the battery banks built in full sized USB port and the micro USB end slides into a cut out with the rest of the cable sitting in a small run. This means in theory if the cable you could replace instead of buying a new unit. This still allows it to be an extremely thin unit. How the cables sits in the unit when not in use.

Whilst the two connectors feel solid but the cable feels a lot like a rubber band. This I am not a fan of. The fact it feels like a rubber band means it feels cheap. However it does include the advanced smart technology that works out the best output to charge your device. With this model it will output 2.0A maximum. This feature is also included on higher capacity models and I am glad it made its way to this one.

Unlike other power banks there isn’t a button that turns on the LED indicator you simply tap near the LED’s and they come on and indicate how much juice you have left.

Whilst the capacity is low at only 4,000mAh compared to my other power banks with each at 10,000mAh it still gets the job done just in a smaller form factor it works well and after taking all of my power banks on holiday I mainly used my PB10000CF and this one. I took this one almost everywhere if I wasn’t already using the other one; this was due to its small form factor it fitted into my pocket along with my phone better than the PB10000CF. Whilst the lower capacity can become a bit of a pain I will still be carrying this device along with my PB10000CF and PB10000 as it will never replace them but it does work lovely alongside them. 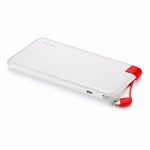