Wireless charging has long been the goal of mobile device fanatics, and whilst the Qi vs PMA wireless standard war rages on, we take a look at a Qi wireless charging station from Aukey that’s sleek, well-built and budget friendly.

For those that have been living under a rock for the last few years, wireless charging solutions have been available in smartphones for a number of years and allows the placement of the device on a mat or charging station, to begin charging without the requirement for a USB charger plugged into the device directly. There are a number of competing standards for wireless charging capability, however most devices are seemingly attempting to standardise on Qi (pronounced ‘chee’). Qi is the brainchild of the Wireless Power Consortium and its standard seeks to deliver power to a device over a transfer distance of up to 4cm.

Full disclaimer here; At MobileTechTalk we’ve never really been convinced by the validity of these devices. They work, and provide power to the devices they charge, however, with the USB cable right there, powering the wireless charging mats, we’ve never really seen the point in using a middle-man to get the device charged.

However, during the review of the Qi-enabled Droid Turbo, we realised we’d need to invest to see what all the fuss was about. The result? Well, we’re now kind of torn. Let’s take a look.

Nothing too fancy here. The device comes in a small compact box with a sleeve calling out the main features of the device and is easily removed. Upon opening the box, the Aukey T20 is presented front and centre, with the bundled USB cables, of which there are two, stored neatly underneath the device along with the instructions, not that you’ll need them.

A surprise here is the exclusion of any power brick into which to plug the USB cables into. The instruction manual references one, however the Aukey website shows the device being plugged into a laptop or portable device rather than a wall outlet. If you have a spare power brick with a USB output, that will do fine. The hardware itself is slightly smaller than we imagined it would be, and that’s a good thing. Whilst larger plates are available, we think the smaller a device charger is, the better. Afterall, a USB charging cable is VERY small, and most people use that anyway.

The device itself comes in both white and black options (black shown) and has a fluorescent green/yellow rubberised ring around the top of the device to secure whatever device is placed atop it. The main base of the device is made of matte black plastic and feels very light. This obviously isn’t going to be an issue as this device is meant to be kept on a desk and utilised there.

The two included USB cables are identical in all but length, presumably to allow for one static, longer lead at your main place of work, and a smaller, more portable cable to allow shorter-reach charging when on the move. It’s a nice touch.

The pad itself is just 10.5mm thick as it sits, has a diameter of just 69mm and weighs in at just 40 grams. It’s quite a compact device and a lot smaller than many Qi chargers on the market. On the outer edge of the device is an LED which glows red to show power on, or green to show charging status.

Aukey have gone for a relatively understated and minimalist design, with the exception being the fluorescent ring on the pad will drive your eyes crazy if you stare at it often. Luckily, the device covers this when charging.

To use the Aukey T20, simply plug the device in to the USB cable, and plug the other end of the cable into a vacant USB port on a laptop/PC/MAC device, or a power brick if you have one. Then place a QI-compatible device (Aukey gives a short and non-exhaustive list of models that will function with this device in the instructions and on their website) atop the pad itself, and the LED will turn green after a few seconds.

Depending on the device, the LED can be a little difficult to see at times. Luckily, many devices come equipped with software that details when a device is being wirelessly charged, so that issue is largely mitigated.

The pad delivers a standard 1000 mA charge to the device which is enough to trickle power most smartphone devices and some tablets.

The Aukey T20 comes in at a great price point with prices as low as £12.99 at Amazon (check the link below) and delivers a solid device. It does exactly what it says on the tin.

We’d have liked to have seen a power brick bundled in, but frankly, if you’re purchasing a Qi Wireless Charging device, you no douibt have another device you can plug this into, or a power brick from the device itself to re-use. It’s not a show stopper.

If you’re in the market for a Qi wireless charging device (perhaps for your desk, or even your car?) then you can’t go wrong with the Aukey T20. It’s small, sleek, and delivers, first time, out of the box. It delivers the same power output as similar devices on the market at a great, often better, price point. You can’t ask more than that!

Whilst this is not an Aukey T20 flaw, there is a definite issue with the wireless charging market currently. This, along with other similar devices, are very much a generation one attempt at wireless charging. When originally brought to market, the WPC delivered Qi with just one setting; low. This means that the limit of these devices’ charging capabilities stands at 5W currently. WPC is working on the ‘medium’ power setting which is set to deliver between 5W and 120W of power which will open up the market much, much wider than it currently is. We’d looking forward to that day! 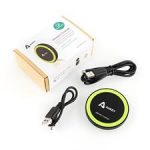