I am somebody who uses a laptop as my main machine and even though I have a Samsung Monitor on my desk I hardly ever use it. This means I have never really needed to use a mousepad because I use the trackpad and keyboard that is built in on my MacBook Pro. That said, let’s have a look at the Ottm XL Desk Mat.So when Oittm reached out and asked me to review this desk mat I wanted to see why so many people used one. The package came in a cylindrical tube although it was fairly badly packaged as you just had a thin line of sticky tape on both sides so it could potentially fall out but fortunately for me it didn’t. The size of the desk mat really surprised me as I did expect it to be a fair bit smaller and luckily my desk is large enough to fit the desk mat on it.

The bottom has some really grippy rubber on it which means it will not move about under usual use scenarios unlike previous mouse pads that I have tested out which glide when you move the mouse around. This claims to be waterproof but the water doesn’t sit on the surface as is shown in the promotional imagery rather the material used on the top absorbs the water which is a bit misleading but the water does dissipate easily so you won’t have to rest your peripherals on a soggy mat for too long. On the other hand the bottom of the mat is waterproof as can be seen in the images.

The stitching around the side was seamless for the most part with the odd loose thread but the workmanship on this was really good.

Something that did annoy me was that dust particles and specs of random dirt just randomly appeared on the desk mat and it was a bit of a pain to get rid of so I literally had to pick it up and shake all the dust off and it was all clean once again and this was something I had to do about once a week with the odd brushing off.

If you have a smaller setup such as an iPad or a compact ultra book such as the MacBook you will be able to have 2 A4 pages alongside it so you can have a great workflow although I did find out that you can’t write on the mousepad which was a bad idea in hindsight but the pen will basically sink into the mat and you will struggle to write more than a few words.

This is much more comfortable for my lower arms as I have been resting them on a piece of semi-glossy wood before and this foam like material is just a worlds difference and it has allowed me to be able to write for longer periods of time without having to take a short rest and     if you do a lot of writing then this is something which is essential for you.

This would definitely be something I would’ve personally bought if I knew how much it would help me write more efficiently as I just don’t like the more bulky wrist rests. This definitely adds some more character to my desk and protects it from being damaged as it is much cheaper to replace this £14 desk mat than a £150 desk. 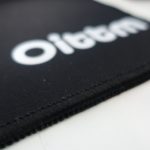