Apples’ iPhone 5 and 5S are old models now. The can’t boast the latest and greatest specifications, and can’t hold a candle to the likes of the iPhone 6/6s/6+ in terms of performance. However, their latest offering, the iPhone SE does share a remarkable similarity with those older devices. Dimensionally, they are identical, opening up a sea of already released cases. We’re taking a look at an iPhone 5/5S case here to see what older cases can be used with the iPhone SE. Let’s take a look at the Gear4 D3O Bookcase.

Huge thanks to Gear4 for the sample.

The Gear4 D3o Bookcase iPhone 5/5S case seems, at first glance, to be a gorgeous little peripheral. Gear4 not only sell cases for Apple and Samsung products, but they also have various Bluetooth speakers in their locker also. Head on over and check out some of their other goodies! The Gear4 D3O Bookcase is a flip style case, with a rubberised carbon finish to the front and back, offset by an orange accented rubber-plastic case for the phone itself. The carbon exterior wraps around and fastens the case with a magnetic clasp. There are openings for the ear piece (a metallic grill no less), the 3.5mm audio jack, Lightning charging port, and speaker grills on the bottom. On the rear the camera and the flash have ample room in their opening, with only a subtle D3O branding on the lip of the surround. The power and volume buttons each have a pass through for easy access and the mute/ringer button is accessible with the case open.

The Gear4 D3O Bookcase has a gorgeous feel to it. I’ve used that word already I know, but it really is one of the nicest feeling cases I’ve used. The carbon effect rubberised surround, and the orange accents are striking. There’s also a Knight Rider-esque orange flash across the front which far from detracting from the style actually accentuates it. The case itself utilises D3O Technology materials in its design which has been specifically engineered to withstand shock; the sort of shock that might occur when one drops their phone for instance. Under normal circumstances the molecules in the case are flexible and dynamically situated. Once a shock occurs however, the molecules become agitated and form a close-nit, locked state which increases the strength of the case and protects the phone within it. Clever stuff eh?

Science aside, it’s as functional as it is ergonomic. Inside the front flap, which is metal reinforced, is a slot for a couple of credit cards or a small amount of money. That same front flap wraps around to the rear where the material has a flex which allows the device to be stood in landscape mode for media consumption.

There are however a couple of niggles which we need to highlight here. Whilst the volume buttons feel clicky and tactile covered in the carbon material again, the power button up top is clear plastic and has no click response at all which doesn’t make for a very nice contrasting experience. Not a world ending omission though. Next, there’s the magnetic clasp. It’s strong enough to keep the device closed when on the desk, but it’s loose enough that it can be caught when handling the device and causes flapping. Again, not the end of the world, but something which on an otherwise very premium case, seems like a little bit of an oversight. A slightly stronger magnetic clasp would be welcome.

That same clasp annoys once more when attempting to use the flip in the case to stand the device in landscape mode. Your choices are to rest the unit on top of the flap, tucked underneath it, or just let it curl irritatingly in front of the screen you’ll be trying to watch. In testing, I opted for the former, wrapping the magnetic clasp under the case itself, maintaining its natural positioning. This worked absolutely fine, but caused a very slight tipping of the screen. It’s hardly noticeable though.

In truth, those are very, very small niggles. The only actual “issue” I noted was the recess for the mute switch on the device. Accessible from inside the case, the switch is so small even in normal circumstances that with the case on it kind of gets lost. If you don’t have nails, it’s going to be tough to flick the switch without thought. I’m not sure how they could improve this without reducing the integrity of the D3O technology, but it’s annoying all the same. This is a nice case. A very nice case, and certainly one of the best I’ve ever used with any device. It makes me want to use my phone more (it’s a work device) just to handle it! It gave me the same feeling as when I first held a Motorola Droid Turbo. The ballistic nylon finish on that was as striking as the carbon effect on this Gear4 D3O Bookcase, whilst obviously being completely different in material design.

The niggles I expressed are minor, and are easily overcome, and the only real question is whether you, as a consumer, are willing to part with the best part of £35 for a case? I’d argue those with brand new iPhone SE’s wouldn’t even think about it – done deal. It protects the device, looks awesome, and has a bit of utility in the card slots, that don’t interfere if you choose not to use them. There are cheaper cases out there that would provide a fair amount of protection for your device, but whilst Gear4 don’t produce a raft of products, they produce quality products on the evidence of this case, and the D3O technology is worthy of the price in my opinion.

If you don’t want to use your phone naked, get one. Simple. 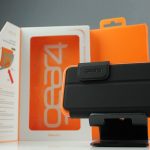