Thanks to EC Technology for the sample.

I don’t know if any of you have noticed my desk in the background of photos for previous reviews? There is usually a great mass of cables for charging things. Frankly I can never have enough USB charging sockets. Especially sockets that charge with more than 500mA output. Granted most people probably don’t have a so many phones and DAP’s and tablets and watches and god knows what else to charge on their desks. So for me getting a 5 port charging station is great news. That it then has a Qi charger build to the top is just gravy. I love Qi and wish everything had it but sadly not. Still it gives me a 6th charging point that takes up zero desk space and that I’m very keen on. Desk space is always at a premium right?

Getting to the box, the box calls a “Super Charger” arguably a much more pithy name than what the website uses. Inside the box there is the charging block thing, then underneath is the mains power cable. All pretty straightforward stuff. The unit is a bit of a chunky thing but that Qi charging plate will be contributing to that. Not that it matters as its desk space, not air over desk that’s at a premium here.

Well it is a USB charging block. Is it a beautiful piece of art that beautifies your desk by stint of its mere presence? No, no it does not. While I can’t accuse it of being ugly it’s just meh, you have it because it’s so damn useful, its looks don’t matter thus its looks are nothing to write home about. In fairness I can’t really think what if anything you could to do to make it more pretty. Yeah, it’s not a looker but I can’t say I care.

Oooooh just look at all those sockets, 5 of them. Now it won’t output 2 amps on each at the same time, though for the life of me I can’t find the exact output specs. If I recall it can do any 4 ports at 2 amps each and plugging in a 5th drops two ports to 1 amp output. So what if Qi is going to? Err I don’t know and I have no way to measure it. How often are you going to have a phone on the top and 5 USB cables charging all at once? Do they all need 2 amp outputs, no, so some will charge a wee bit slower, big woop. Trust me the handiness of having all these sockets in one is great. I recently had to go away for a few days and this was the one and only charging thingy I took. It kept all my bits and things charged and not once was I at a loss for a USB socket on it to use. Road warriors I’m sure will appreciate this is a way that I can only have glimpsed but still, it was immeasurably useful to have. Likewise for living on my desk, having a socket always there free and with plenty of power unlike the USB sockets that come out of my monitor.

Qi can be a little bit fussy about just where you put the phone down. I don’t recall anytime I put the phone down and it failed to start charging. Playing about with my normally very fussy Nexus 4 I could fair slide it about and Qi kept charging. There is also a handy LED that comes on when you start Qi charging so you don’t ever accidently put down your phone wrong and not notice it isn’t charging. Thing is the LED is mostly covered by the phone being in the way so, yeah great idea but not that effective. In fairness there isn’t really anyway around that fact. If you put something on top of the charger, you can’t really see the charger.

Curiously cool. Qi normally warms up a lot, it did warm up when being used for a while but the rest of it? Well it got barely warm at all. Even plugging in several USB cables and devices to charge it did warm a little but not much. Maybe the things I was using were only pulling 500mA?

It seems to have vanished off the internet so I can’t look up current UK pricing, however Rainforest Germany has it in stock and going for just 20Euro’s. That’s just £14.50, omg is that including free shipping? It can’t be can it? Qi charger plates go for more than that on their own and you still have to supply the actual USB charger for them. This has it build in and 5 bonus charging sockets. If that really is to your door for less than £15 then I’d say jump all over that. It could explain why the thing seems entirely sold out in the UK.

Is the charging thingy, whatever its official name is, a looker? Nope. Is it functional as hell? You bet your backside it is! 5 proper, powered USB charging sockets right there and then to top it off its got a Qi charging plate on it!!!! No wonder you can’t find one for sale in the UK right now. Still Amazon Germany will happily send you one anywhere in the EU. Granted you’ll likely get a Euro plugged cable but as it takes a standard figure 8 cable you probably have a few around anyway. If not, a couple quid on eBay will get you one. Maybe it’s some mad last of stock fire sale, I really don’t know but it’s currently going for an insane bargain price. At twice its current price I’d still say it was worth it. it’s a super handy little package to charge all your toys. 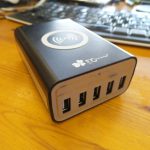