Mobile device batteries have become one of the most important aspects of the hardware list when consumers consider products of late, due to the increasing demand we put our devices under on a daily basis. Wearable devices, Smartphones, Cameras, Bluetooth peripherals and much more; the fact is we all use a lot of devices that use a lot of power. Battery packs have become a common accessory for the technology power user to carry around with them for those quick top ups. EC Technology has you covered – easily – with their 22400 mAh battery pack. Let’s take a look!

There are many, many battery packs out there that can assist in the never-ending journey to ensure all devices being used daily remain powered, so why EC Technology? Simply put, We’ve worked with EC Technology reviewing a number of products and all of them have been a) fit for purpose and b) good value for money. So when I was looking for a power bank to replace my existing Anker 10,000 mAh pack for use on my travels, EC Technology were naturally in the running.

To say price wasn’t a motivating factor would be a lie. Of course it was. So was the size however. At 22400 mAh, it was the largest in the price bracket I could find with more than 2 USB ports at varying speeds.

If you haven’t already, take a look at our unboxing video for more information. The key aspects are as follows:

[pullquote align=”right” color=”#FF9900″]”Each port is stated to deliver 1A, 2.1A and 2.4A respectively.”[/pullquote] So let’s start with the obvious, the 22,400 mAh battery. It’s large to say the least. On paper this should charge the recently released Apple iPhone 6S Plus 8 times from flat, the Samsung Galaxy S6 Edge Plus well over 7 times from flat and the recently announced Apple iPad Pro twice from flat (based on the rumoured 10,000 mAh battery). Whilst mileage may vary, these numbers are often a rough finger-in-the-air indication only. Due to the energy lost via heating and the transfer of energy, its real world application is around the 16,000 mAh of total charging. It’s worth bearing that nugget of information in mind when considering any battery pack as all are subject to the same physical energy loss. The EC Technology 22400mAh Battery Pack does a better job than most however losing only 25-30% of its overall charging ability. This is still more than enough to charge many if not all of your devices many times over.

Physically the unit comes in a number of different colours; the Black & Red device we have, as well as a Blue, White & Red, White & Black, and Black & Blue options. On one edge the 3 individual USB ports are found, all of which can be used simultaneously. Each port is stated to deliver 1A, 2.1A and 2.4A respectively which covers most if not all USB-chargeable devices on the market in terms of charging speed. In my testing with my USB test meter I only managed to top 2A, but that is most probably my device limitation than the EC technology 22400mAh Battery Pack one.

Placed above the 3 USB ports is a 1W LED flashlight, something that’s common amongst battery packs it seems.

Moving around the rest of the device is a relatively simple affair, with the only other physical additions being a power button on one long edge used to power on the device and cycle the LED flashlight modes (more on that later), and 4 blue-lit LEDs to indicate the battery charge state. The unit is coated in a matte polycarbonate plastic which actually feels quite premium with no audible creaks or visible cracks or strains anywhere.

All this technology comes at a price. Not monetary as such, but weight. At almost 450 grams this is not something you’ll be pocketing in your jeans pockets or purse without noticing a significant difference. It’s not light-weight and as I mentioned on the unboxing video, this is a device that people will perhaps want to take along if they already have a laptop bag, or other tech storage.

Luckily though, the heft gives a reminder that there’s a big ol’ battery stuffed in there, so it’s easily forgiven its weight.

[pullquote align=”left” color=”#FF9900″]”The device will power itself off if no device is connected for a period of time.”[/pullquote]

The unit delivers exactly what you’d expect. During my testing I found that the EC Technology 22400mAh Battery Pack managed to charge my LG G Flex 2’s 3000 mAh three times from flat, as well as my Wife’s Samsung Galaxy S4 Mini (1900 mAh battery) once from almost flat, as well as topping up my Xiaomi MiPad Android tablet to full (6700 mAh battery). At this point on the EC Technology 22400mAh Battery Pack, only 1 blue LED was illuminated which indicates a remaining charge of below 25%. Not too shabby eh?

Each device was charged from the EC Technology 22400mAh Battery Pack alone with no other devices charging simultaneously. This allowed the ports on the device to decide how best to charge the device connected to it. Whilst the ports are rated as 1A, 2.1A and 2.4A respectively, they do not necessarily function at that precise speed, instead opting for the maximum allowed by the device. Whilst not specifically called out in the literature, this suggests each port is capable of up to 2.4A. When multiple devices were plugged in, the ports acted more akin to their ratings and charging did indeed slow down on the connected devices, but not unbearably so. The point here is that attaching multiple devices at once will mean your mileage will vary in terms of full charge times.

Speaking of charge times, when it came time to charge the EC Technology 22400mAh Battery Pack itself, it took around the 6.5/7 hour mark from a 2A charger. That’s pretty good all things considered!

One other neat feature that’s referenced in some of the literature on the EC Technology website but not the included instruction manual is the fact that the device starts charging from the moment you plugin a device. On many other power banks there is a need to turn the device on first, which always seemed a little strange to me. Thankfully this is not the case here. Similarly, the device will power itself off if no device is connected for a period of time. Nice touches indeed. The LED flashlight isn’t something I expect many will use on a regular basis but it is a nice addition, specifically due to it’s 3 modes of operation. The 1W LEd Flashlight on the EC Technology 22400mAh Battery Pack can be cycled, using the power button, between a full light mode, dimmer mode and an SOS mode. All are adequate in terms of light, and if required in the dead of night should provide at least a semblance of comfort when trying to find ones’ car keys!

As mentioned earlier, the EC Technology 22400mAh Battery Pack is bundled with a microUSB cable to allow one device to be charged. Obviously those with the latest Apple products will be out of luck here as there is no bundled lightning cable, however it might be worthwhile to invest in a Tylt Syncable-Duo cable or equivalent, which includes both microUSB and Lightning tips on the same cable.

[pullquote align=”right” color=”#FF9900″]”Choosing a colour option other than Black & Red sees the price jump to £27.99 inexplicably.”[/pullquote] As I made reference to in the introduction, we’re increasingly requiring more and more battery life from our products so the power banks market has perhaps been one of the fastest growing mobile technology peripheral segments, and with good reason. There are many to choose from out there. From slim, and small capacities to this beast (in both sense of the word). So what does the EC Technology 22400mAh Battery Pack deliver that others do not? Quite simply, mAh per pound.

The 22400 mAh in this unit is priced at £23.99 currently for the Black & Red colour option. Frankly, finding that size power bank, with 3 USB ports, for a cheaper price, and from a reputable peripheral company is not going to be easy, or perhaps even possible.

The only black mark against it isn’t levelled at the device itself, but the pricing. Whilst at £23.99 this is a great deal, choosing a colour option other than Black & Red sees the price jump by £4 (currently) to £27.99 inexplicably. We can only surmise that there is a large inventory of the Black & Red devices to shift but it’s hardly a great defence. The only defence is that they’re not the only company doing this as Chris found in his review of the EasyAcc Monster 20000mAh power bank.

There are no downsides to this product, only considerations. Consumers need to be aware that a product packaging this much power isn’t going to be light and pocketable a-la smartphones, and it certainly isn’t going to fully charge in an hour or two. As long as that’s taken into account, pound for pound, there aren’t many better power banks out there than the EC technology 22400mAh Battery Pack.

For more information on this power pack, EC Technology, or other mobile technology peripherals, take a look at their website here. 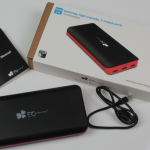