Choetech, a new company for me but they have kindly sent me their newest, QC3 certified charger to play with. As far as USB chargers go it’s a looker but how does it otherwise perform? Find out.

Ahh my desk, if you’ve never seen it, it has at least 4 million cables on it, most of which being micro USB charging cables. You can never enough of the things in my opinion, well maybe you can but hey I need lots. Not just in the living room / on my desk but by my bed too for charging things overnight that need it. Argh too many things to charge. Could you just imagine what it would be like if they were all single plug USB chargers??? Thank god for multiple out USB charger things. So I have a new one, one from Choetech with a super catchy name. Okay so it’s not catchy but it is accurately descriptive so that’s something.

Opening up the box and it’s a black, matte plastic coated monolith. Ooh it’s got a little stand and the stand is actually nice, it’s got a big rubber base on it. I like that, not crucial or anything but it’s nice to see as my others certainly don’t. I also see they included a USB type-C cable. That’s a nice thing to include, though at the moment (sad face) I have nothing with USB type-C to plug it into. It’s a nice little bundle, I’m especially liking that little stand, please take note other manufacturers.

It’s rather lovely. I very much like soft touch matte plastic and I’m rather partial to its stand. Okay so it’s a USB charger, it’s a black rectangle so it’s not exactly a work of art but it looks nice. Its looks nice on my desk, it’s certainly much more attractive than the EC Tech Qi one I have siting. As chargers go it’s pretty. I really also rather like its blue LED on the front and even more so that it’s a very diffuse, frosted light so it’s not stark on the eye.

So we have a total of 6 sockets on the front. If you look closely you’ll notice that two of them have a blue bits inside. Yes you know that USB-C sockets and stuff have blue to denote that it’s USB-C. So that means those two sockets can pump out even more power than the other ones. Normal USB sockets are limited to what, 2.4 Amp’s at only 5 volts. Those other two sockets though, they have been certified by Qualcomm to conform to the “Quick Charge 3.0” specification. So they can output not just 5 volts but 9 or even 12 volts if your device supports it. Basically that means if you have a QC3 compatible device it’ll charge like gangbusters. What’s not to like about that?

Getting the USB voltage and current meter out and the ports all seem very consistent in their outputs. Very steady actually with almost no deviation in use and no difference between the different sockets too. Excellent stuff.

All chargers get warm and this one is no exception. If you have all the sockets blasting out power then it gets pretty hot pretty rapidly. Though since you have the stand and it can sit upright rather than flat, that does seem to make a difference. It doesn’t seem to get quite as toasty warm as my others do.

Well….. I can’t find UK pricing for it but it’s on Italian, French and German Amazons. All for different prices. Yeah, seriously three European Amazon sites, all different prices. That’ll be the EU “single market” in action then. Anyway……..for either US$36 in the US or just €25 from the French Amazon I think you’re getting a bit of a steal. You’d pay that for 6 normal sockets but you also get 2 QC3 super-fast ones, the little stand and a nice USB-C cable. Plus at just £3.30 a socket, come on you can’t say much fairer than that.

USB chargers may not be the world’s most sexy devices but they are one of the most necessary. This one, as they go, is a looker. I like that matte black plastic, the diffuse, soft blue glow light on the front, its sturdy and secure footed little stand. Then you chuck a cable in just for icing. It’s a little odd that I couldn’t find it in the UK, I could find its predecessor version. It is almost the same but is QC2 certified rather than QC3. So still good but given its £20 you might as well get the French Amazon one as it’s the same price. As chargers go it ticks all the practical boxes and they have made it look pretty nice too, I mean who wouldn’t be happy to have it and its soft blue glow on their desk? Top marks from me. 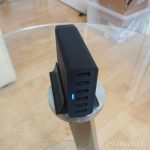